This is a preview which focuses on the Chinese Super League game between Beijing Guoan and Tianjin Tigers at the Suzhou Olympic Sports Centre Stadium.

After a disappointing AFC Champions League campaign, Beijing Guoan returned to league action and picked up a 2-1 win over Hebei. Tianjin Tigers, meanwhile, broke a winless sequence to beat Wuhan 2-1 at home. This was the first win for the Tigers.

A victory for Beijing Guoan

Beijing Guoan have had a 100% record in home matches this season with the two Chinese Super League games on this ground finishing as a victory. Tianjin Tigers, meanwhile, are yet to score on the road this season. Furthermore, Beijing Guoan have had a sensational record in this fixture with six consecutive wins. Despite Tianjin Tigers picking up their first win of the season last weekend, there is no reason to look beyond a home victory.

The action has seen plenty of goals especially for Beijing Guoan, who have returned an average of almost three goals per match in the last six games. Tianjin Tigers, meanwhile, have less than half this figure, as they have not even done enough to average a goal per game. Genwei Yu’s men are yet to score on the road this season.

Beijing Guoan to not concede any goals

Tianjin Tigers are looking to break their duck in away matches. In the latest home league match, Beijing Guoan ended up conceding the first home goals of the campaign. But this should not be too much of a concern with Tianjin Tigers being very poor going forward.

Beijing Guoan might end up at the top of the group B by the end of this weekend matches. They are trailing Shanghai Port by just two points even if they are quite poor on the goal difference front. The upcoming match against Tianjin Tigers should provide an opportunity for Beijing Guoan to build up their strength and lead over Changchun Yatai or Shanghai Shenhua.

Tianjin Tigers will be highly motivated after getting the first victory of the season. There is still a lot of work to be done if the club are to make the way up the table with an incredible four points separating them from the likes of Shanghai Shenhua and Hebei. The Tigers are certainly assisted by Hebei losing during the weekend. 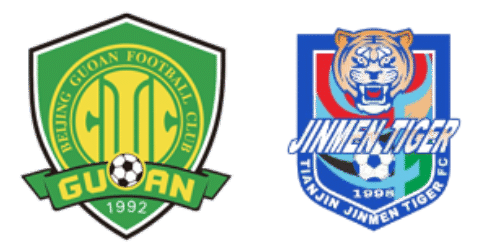