It looks a long shot that Bournemouth catch Fulham for the title now but they are in pole position to finish second. Will they move three points closer to confirming that here? Find out with our Sheffield United vs Bournemouth match preview with free tips, predictions and odds mentioned along the way.

Blades to get the win

Bournemouth had been on a five game unbeaten run before losing out 2-0 away at West Brom. Do we see them bouncing back here? No, we don't. Sheffield United have a decent record against the Cherries with just one loss in the last five meetings; the Blades have won three. Our Sheffield United to win prediction isn't all about history though. Their home form is excellent at the moment; they haven't lost at home since October, which was 11 games ago. On top of that, Bournemouth played against West Brom on Wednesday whilst Sheffield United played Tuesday evening; that extra day could prove crucial in what is likely to be a fairly tight affair.

Our second tip is all about playing for value as we delve into the total goals market. We're backing over 2.5 owing to the more attractive odds. Recent stats show Sheffield United have passed the 2.5 mark in three of their last 10 with Bournemouth going over 2.5 in six of their most recent 10 games. The key factor though is the head to head record; the last two meetings have gone over 2.5 goals with each of the last four played at Bramall Lane hitting at least three goals. In fact, those four games have a 5.0 goal average.

Sheffield United vs Bournemouth: Let's look at the predicted lineups

This is a match between two good sides that both have their eyes on promotion albeit through different channels. Bournemouth are eyeing a top two finish whilst Sheffield United are looking to lock down a spot in the playoffs.

Sheffield United got back to winning ways on Tuesday after a three game winless run and now they're back at home they'll be confident of grabbing another result. With their home form so good, if they do finish in the top six few teams will want to face them in the playoffs. They could send another message of just how good they are here.

Bournemouth had been in good form until falling to a somewhat surprise defeat at the Hawthorns in the week. Despite the loss, it would be a collapse for them to miss out on automatic promotion but another loss here would test their character in a big way.

A quickfire FAQ on Sheffield United vs Bournemouth 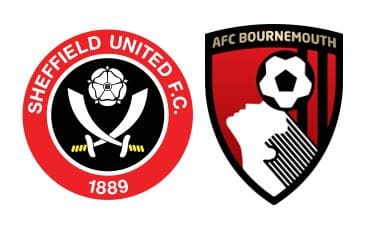