Bottom of the table Sheff Utd still haven't replaced former manager Chris Wilder and sit 15pts from safety heading into the last eight games of the campaign. Arsenal haven't performed as expected in the Premier League and there is pressure on manager Mikel Arteta to claim a top 7 finish this season, but that could prove much easier said than done. Read our full match preview of Sheff Utd vs Arsenal in the Premier League.

Arsenal have won four of their last six games against Sheff Utd, including a 2-1 win when the pair locked horns in October. Sheff Utd have lost five of their last six matches in league and cup and looked destined for relegation from the Premier League this season.

Sheff Utd vs Arsenal: All the latest stats and markets

The pressure is on Arsenal to win this weekend

Sheff Utd went down 2-1 at Leeds last weekend and remain well adrift at the bottom of the Premier League table with just 14pts to their name. The Blades are yet to announce their new manager and will probably wait until relegation back to the Championship has been confirmed. The hosts have only kept one clean sheet in their last six matches and will be expecting another tough test on Sunday. Rodwell, O'Connell, Robinson, Basham, Sharp and Berge could all miss this weekend's clash through injury.

Mikel Arteta has a midweek Europa League 1st leg against Slavia Prague to get through before he can focus on a plan to secure 3pts at Bramall Lane this weekend. The Gunners currently sit 10th in the Premier League table following a disappointing 3-0 home defeat by Liverpool last time out. Results haven't been consistent for Arteta this season and the pressure is beginning to build on the Spaniard, who really needs to finish in the European places or risk getting sacked in the summer. David Luiz and Kieran Tierney look set to miss the game through injury and Martin Odegaard looks set to face a late fitness test.

FAQ: The Blades vs The Gunners 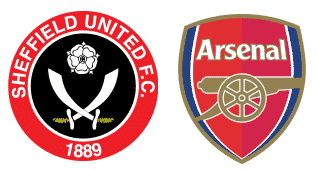