Another interesting duel in the upcoming La Liga round is the Real Sociedad vs Granada matchup. To learn more about this game, check our preview and free betting tips.

If you are not sure what is the right bet for the Real Sociedad vs Granada duel, check our top betting predictions for this match:

Real Sociedad to Win with Handicap (-1)

Neither team is in great form at the moment, but Real Sociedad has three draws and one win in the last four games in the league, while Granada has lost three games in a row now.

With that in mind, and taking into account the fact that Real Sociedad is a much better team on paper and that they are playing at home, our prediction is for Real Sociedad to win this game by two or more goals.

The last three h2h duels between Real Sociedad and Granada that were played in San Sebastian all ended with a 2-0 win for Real Sociedad, which is very interesting.

So, if you want to take a punt at some higher odds, you can place a bet on correct score in this game being 2-0 once again, although the most common score for Real Sociedad at home this season was 1-0.

The latest odds, stats, and more Real Sociedad vs Granada

If you are looking for the best Real Sociedad vs Granada odds, you can check our list of odds taken from the top UK bookies:

While the two teams are in completely different situations right now, this could be an interesting duel. Here's a closer look at both teams:

Long gone are the days when Real Sociedad sat at the very top of La Liga since the team's form dropped significantly and that led them to plummet down the standings. Still, the team from San Sebastian is currently in the seventh spot in the standings and just three points behind Atletico Madrid who is fourth, which is the last place that leads to Champions League next season.

Carlos Fernandez, Ander Barrenetxea, and Nacho Monreal will miss this game with injuries, while Igor Zubeldia will have to serve a suspension in this match.

After a period of good play and very good form, Granada is back to struggling. The team has now lost three games in a row and they have just one win in the last six games in La Liga. Despite this, Granada remains six points ahead of the first team in the relegation zone, so there's no reason to be too worried – yet.

When it comes to team news, Neyder Lozano and Santiago Arias are still out with injuries, while Antonio Puertas, Isma Ruiz, and Luis Maximiano are unlikely to play after testing positive for coronavirus.

FAQ for Real Sociedad vs Granada 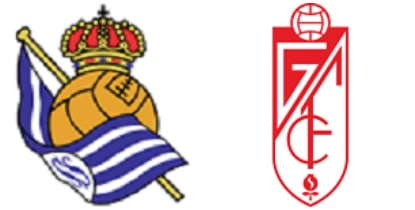