Hearts and Dundee United meet at Tynecastle Park in the Premiership on Sunday, August 14th. Can Hearts maintain their strong start to the season at Dundee United’s expense? Read our free predictions and find the latest odds for the fixture below in our detailed match preview.

Hearts have won three of their last four encounters with Dundee United ahead of the teams’ tussle on Sunday. Read our top predictions for this weekend’s fixture below.

With a strong record that shows three victories in four previous encounters with Dundee United, Hearts will fancy their chances of pushing their unbeaten start to three games in the Premiership on Sunday. The Terrors were mauled 7-0 by AZ in midweek in the Conference League qualifiers and the damage done by that trip in terms of fatigue and shattered self-belief could mean that United are vulnerable again in Edinburgh. Circumstances look stacked in Hearts’ favour here, so side with the Jambos in the match result markets.

Recent encounters between Hearts and Dundee United have been exhilarating contests, where both teams have thrown off the shackles and pushed for goals. The last three meetings between the clubs produced a staggering 5.33 goals per 90 minutes, with each contest breezing past the over 3.5 goals line. With largely the same players on show on Sunday, more fireworks are anticipated at Tynecastle Park and bettors are advised to back over 2.5 goals to rattle the net again.

Top Betting Odds and Stats for Hearts vs Dundee United

View our selection of the best stats for Sunday’s game below alongside a tool to help you choose the most lucrative odds.

Read all of the latest injury updates and team news for Sunday’s Premiership duel between Hearts and Dundee United below.

Hearts have a clean bill of health for their Premiership test at home to Dundee United on Sunday. The Jambos drew 1-1 with rivals Hibernian in the Edinburgh derby last week and manager Robbie Neilson could call on the same players that featured there in this weekend's fixture.

Peter Pawlett is listed as Dundee United's only injury concern at present. The midfielder has an Achilles tendon issue and could be out until late August. The Terrors' dreadful 7-0 loss at AZ in midweek could have an impact on team selection on Sunday. 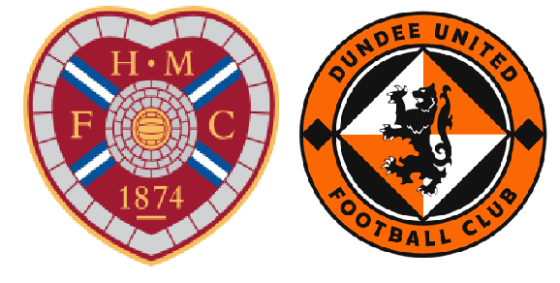 Where can I find the best odds for Hearts vs Dundee United?

Here at Football Whispers, you can find some of the best odds around for Hearts vs Dundee United.