West Ham remain in the hunt for the European places but can't really afford to drop any points at home to struggling Burnley this weekend. The visitors sit third from bottom of the Premier League table, 4pts adrift from safety, so even a point on Sunday would be a decent result for Sean Dyche's men.

West Ham have been strong at home this season and despite having an important European fixture in midweek, we're still expecting the Hammers to beat Burnley on Sunday. David Moyes' men are unbeaten in their last three meetings with Burnley, picking up two wins and a draw. The Hammers have won three, drawn one and lost two of their last six matches in all competitions with all of those positive results arriving at the London Stadium. Burnley have lost five of their last six matches and were probably lucky to beat Everton in their last home game.

Bowen top scores in the league for West Ham this season with 9-goals and we're backing the 25-year-old to find the back of the net against Burnley this weekend. The attacking midfielder has scored 5-goals in his last 10 appearances for the Hammers in all competitions, netting in each of West Ham's last two home games against Lyon and Everton, so you can see just why we believe he has a great chance of scoring against a leaky Burnley defence.

West Ham made the trip to in-form Brentford last weekend and ended up losing the game 2-0. The Hammers were bound to show some tired legs following their midweek game with Lyon in the Europa League, something Brentford took full advantage of. The first half ended goalless but Brentford took the lead just 3-minutes after the restart through Mbeumo and in the 64th-minute, Toney wrapped up the points with a second goal for the hosts.

Burnley were looking to make it back-to-back wins in the Premier League when they made the trip to Norwich last time out. However, Burnley didn't really show up for the majority of the game and Norwich ran out comfortable 2-0 winners in the end. Lees Melou put the home side in front after just 9-minutes and 4-minutes from time, Pukki made it 2-0 to end any hopes of a late Burnley comeback.

Burnley: Mee, Pieters and Gudmundsson are expected to miss the trip to the capital due to injury. 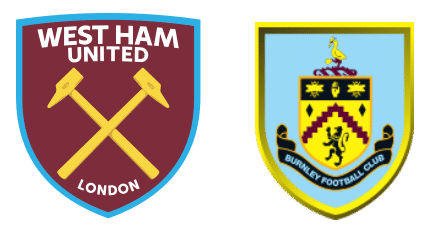