Nottingham Forest still have a good shot of making the top six but they can't afford many slipups between now and game week 46. Will they chalk up a win here? Find out with our Blackpool vs Nottingham Forest match preview with free tips, predictions and odds mentioned along the way.

Nottingham Forest have been a difficult team to beat; they've lost just once in their last 10 games across all competitions. To be fair, that loss was against Liverpool, one of the best teams in the world; Forest have actually defeated Premier League sides like Arsenal and Leicester City this season. On the other hand, we have a Blackpool side that has no losses in their last four games; they've won three of those four games, with a draw. It's worth noting that these teams tend to draw when they play against each other; five of their last eight encounters ended in draws. Considering both teams have not lost a lot of games recently, we're predicting a draw here.

Blackpool vs Nottingham Forest: Let's look at the predicted lineups

Blackpool's season has been fantastic based on where they were at pre-season but it's Nottingham Forest who have plenty still to play for. A win here would help them in their chase for the top six.

Blackpool have enjoyed some good form the past couple of weeks; they are unbeaten in their last four games, with three wins and a draw. Neil Critchley's men will welcome Nottingham Forest to Bloomfield Road on Saturday; they'll hope to extend their unbeaten run to five games.

Nottingham Forest are coming off an FA Cup quarter-final exit at the hands of Liverpool; they had no losses in nine games prior to that loss, with six wins and three draws. Steve Cooper's men will look to bounce back from that loss as they take on Blackpool today.

A quickfire FAQ on Blackpool vs Nottingham Forest 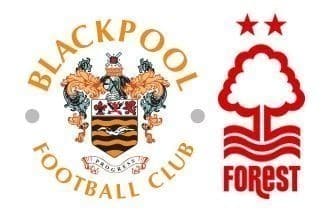