St Mirren have the odds stacked against them as they visit the Pittodrie Stadium to take on Aberdeen this weekend. This preview will have a closer look at this Scottish Premiership game on August 6, 2022.

Aberdeen opened the new campaign with a disappointing 2-0 loss against Celtic with the team not contributing much over the 90 minutes. St Mirren did relatively well against Motherwell before succumbing to a penalty scored by van Veen.

Aberdeen were quite poor in the game against Celtic while St Mirren will take a lot of heart from the performance against Motherwell up until the penalty. However, St Mirren have never really excelled at the Pittodrie Stadium with no wins in the last 17 visits. It is unlikely that St Mirren will overcome the psychological disadvantage.

This fixture is likely to see less number of goals going by the opening day performance of the two teams. Aberdeen were rarely able to threaten Celtic’s defence while St Mirren were quite wasteful with their opportunities against Motherwell. Even though Aberdeen are likely to perform slightly better against St Mirren, they have not exactly produced a ton of goals in this fixture apart from two of the last six meetings.

Aberdeen have had a disappointing start to the season with the loss to Celtic. This runs Aberdeen of valuable confidence coming into the game. One advantage for manager Jim Goodwin will be the availability of Liam Scales, who was ineligible to feature against Celtic. Meanwhile, Goodwin has never been able to beat St Mirren in his managerial career.

St Mirren come into this fixture with some decent amount of confidence after having done well against Motherwell in the opening game. Last season, there was not too much difference between Aberdeen and St Mirren in the league table. Manager Stephen Robinson is looking to build on his mediocre record of two wins in seven games against compatriot Jim Goodwin.

Aberdeen: Aberdeen are sweating on the fitness of Jack MacKenzie while Connor Baron is definitely ruled out of the game due to a knee injury.

St Mirren: St Mirren have no injury problems coming into the fixture.

Questions about Aberdeen vs St Mirren 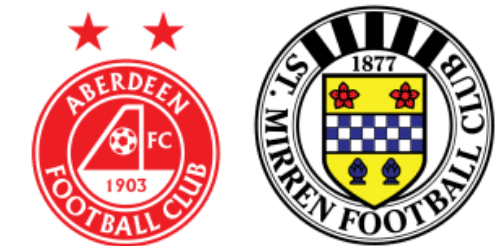 Where is the match scheduled? Pittodrie Stadium

Which team is the favourite to win? Aberdeen