Unforgettable World Cup Moments: the own goal that cost a life in 1994

“Life doesn’t end here. We have to go on. Life cannot end here. No matter how difficult, we must stand back up. We only have two options: either allow anger to paralyse us and the violence continues, or we overcome and try our best to help others. It’s our choice. Let us please maintain respect. My warmest regards to everyone. It’s been a most amazing and rare experience. We’ll see each other again soon because life does not end here”

Andrés Escobar, Colombia’s captain at World Cup 1994 in the United States, had a message of real meaning published in El Tiempe – a big newspaper in Bogota – following his country’s exit from the competition. 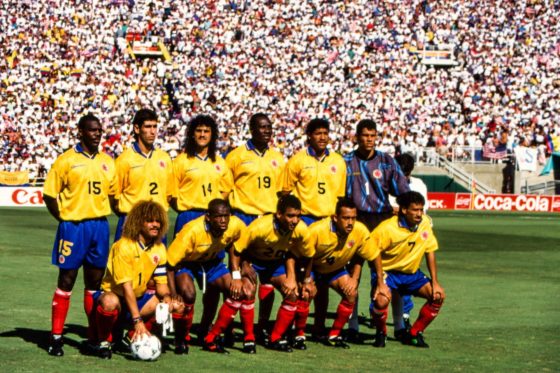 Escobar had scored the decisive own goal in a group game against the host nation in Pasadena, the city of roses, that confirmed Colombia’s unexpected early exit from the tournament and his words foreshadowing words in El Tiempe weighed heavy with fear.

Less than one month after Colombia’s 2-1 defeat to the United States at the Rose Bowl, Andres Escobar was shot and killed in the car park of a Medellín nightclub on the darkest of dark days for football.

The road to World Cup 1994 and Colombia’s Golden Generation

Andres Escobar was 27, approaching his prime years and a key member of a Colombian team making waves in the lead-up to the 1994 World Cup stateside.

Indeed, this Colombian outfit under popular coach Francisco Maturana was considered a dark horse to win the tournament outright and iconic Brazilian Pele had picked them out as his favourites to prevail.

Pele’s assertations were far from asinine – Colombia capped their superb qualification campaign with a rollicking 5-0 win over Argentina in Buenos Aires and in 26 fixtures before USA 94, La Tricolor had tasted defeat just once.

As a South American with his finger firmly on football’s pulse in the continent, Pele had the inside track on a Colombian team that were something of a mysterious entity across the rest of the planet.

Only two members of their squad played in Europe and while the skills of Parma's Faustino Asprilla and Bayern Munich's Adolfo Valencia were known to many, others like Freddy Rincon, Leonel Álvarez and Ivan Valenciano weren’t, while captain Carlos Valderrama was more renowned for his hairstyle than his ability to brush markers off in midfield.

However, while the promise on the pitch was plentiful, the socio-economic picture off it was bleak in Colombia. Notorious drug cartel kingpin, Pablo Escobar, had been murdered in December 1993, just before the national team would embark on its World Cup adventure in the United States, and his assassination would have chaotic consequences.

Pablo Escobar – who shared a surname with Andres, but nothing else – was feared and adored in equal measure in Colombia. The country’s poor had a particular soft spot for the criminal mastermind and Escobar funnelled some of his drug money into housing, sports facilities and employment for those living in disadvantaged areas.

Escobar was also the owner of Atlético Nacional, Medellín’s biggest club, which became a vehicle for money laundering. Powered by Escobar’s cash, Nacional became Copa Libertadores champions in 1989 with a team that featured Andres Escobar in defence.

Don Pablo was a huge fan of the beautiful game and following his arrest and subsequent detention in Catedral Prison, he was visited regularly by Colombian international players – one of which was enigmatic goalkeeper Rene Higuita of scorpion kick fame. The stopper was even dropped from Colombia’s World Cup roster for some candid comments about his visits.

When Pablo Escobar was killed, crime in Medellín spiralled out of control and without the King of Cocaine keeping a tight noose on the Colombian underworld, the “law of the land” as international boss Francisco Maturana put it, disintegrated.

Speaking on ESPN’s incredible documentary, “The Two Escobars”, Pablo’s cousin Jaime Gavira explained the shift in Colombia following his relation’s death. “When Pablo died, the city spun out of control. The boss was dead, so everyone became their own boss. Pablo had prohibited kidnappings. He ran the underworld with complete order. Anything illegal, you asked for Pablo’s permission.”

With anarchy behind them and their homeland in the grip of a catastrophic mess, the Colombian national team jetted off north to the United States.

World Cup 1994: A series of disasters

Already lumbered with high expectations, Colombia’s players were now also tasked with lifting the spirits of an entire nation in despair.  Upon landing in Michigan to begin preparations for their first game against Romania, they began to feel the immense pressure.

“It’s difficult to stay focused, but I find motivation in the good things to come,” said Andrés Escobar, who had a transfer to Italian giants AC Milan lined up after the tournament.

With their resolve already softened, Colombia wilted badly in their first Group A fixture against a dangerous Romania side, who listed Gheorghe Hagi, Florin Raducioiu, Gheorghe Popescu, Dan Petrescu and Ilie Dumitrescu among their number.

Hagi and Raducioiu picked the Colombian defence apart in a 3-1 win for the Europeans, while keeper Bogdan Stelea made a string of acrobatic saves to deny the frustrated Colombians at the other end.

It was the worst of starts for Colombia and their dire performance drew the venom from angry supporters and out-of-pocket criminals back home, who had lost large wedges through gambling on their team.

The mood in the camp took another nose dive when defender Luis Herrera, whose son had been kidnapped and then returned before the World Cup, experienced tragedy again when his brother was killed in a car crash shortly after the loss to Romania.

By the time Colombia’s second Group A match against host nation, USA, came around, their squad was frozen stiff with fear following a tirade of threats from home.

In Medellín, mayhem ensued and while the body count rose and horrors continued to unfold, the Colombian team had become a lightning rod for abuse. Death threats were stacking up and the players knew that the messages of intimidation were not idle.

Manager Maturana had an emotional breakdown during a team meeting when he revealed that he had been warned that if Gabriel ‘Barrabas’ Gómez started against USA, the entire Colombian squad would be murdered.

Barrabas was an integral part of Maturana’s team, however, he relented under the pressure and left him out of his XI for Colombia’s clash with USA at the Rose Bowl.

Outwardly at least, Colombia were confident that they could beat the Americans. “We’d played hundreds of friendlies against the USA and won them all,” said the midfielder Leonel Álvarez afterward, however, behind closed doors, the squad was gripped by fear and it showed in Pasadena.

35 minutes into the contest, Andres Escobar stretched to cut out a low centre from John Harkes, but inadvertently sent the ball dribbling past his flat-footed keeper, Óscar Córdoba, and into his own net. It was the first and last own goal of Escobar’s career.

El Caballero del Futbol (the gentleman of football) wore the numb expression of a man who had retreated inward to weigh up the dire consequences. There can be little doubt that he knew the ramifications his own goal would have if Colombia didn’t turn the game around. His teammates were certain to know them too, however, they couldn’t find an answer and USA doubled their advantage through Earnie Stewart early in the second half.

Adolfo Valencia hit the latest of consolations, though the damage was already done and Escobar’s teammates were well aware of the gravity of the situation

Speaking later, midfielder Alexis Garcia said: “He had to make a play on the ball and unfortunately it went in. I saw Andrés’s face and felt deep pain. It was like a premonition.”

Colombia somehow managed to steel itself enough to beat Switzerland in their final group assignment, though they finished bottom of Group A and were on the first plane back to Medellín. 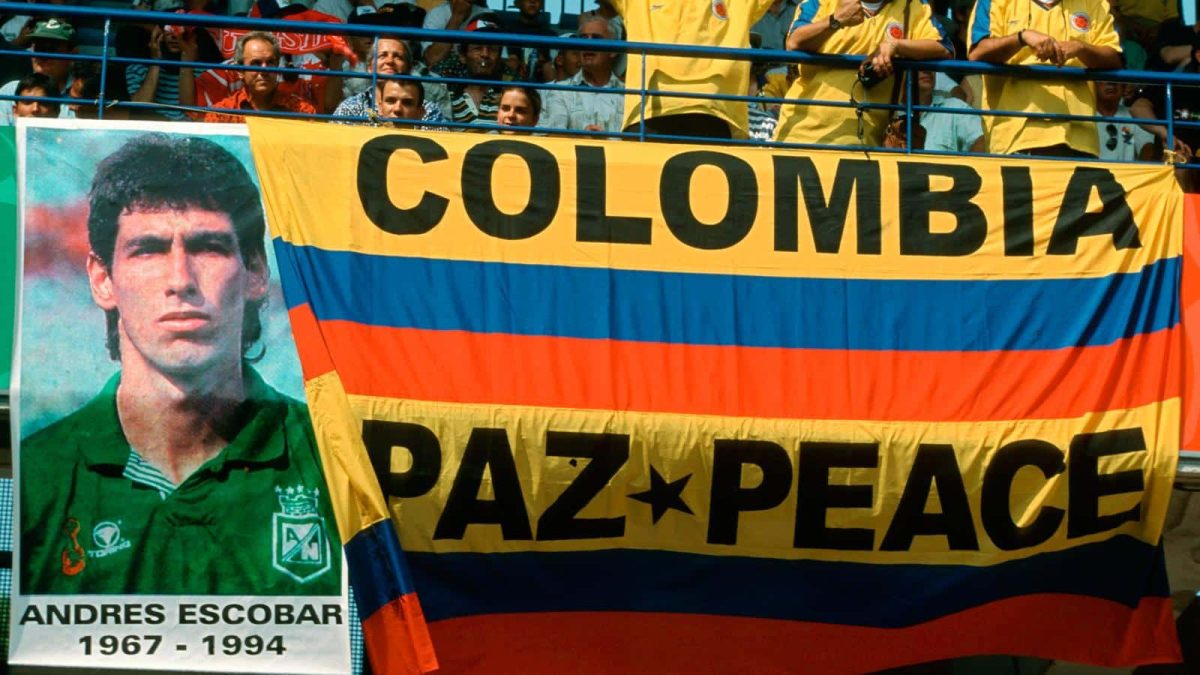 Andres Escobar was torn to pieces by Colombia’s World Cup exit and the major role he had played in their demise, though he wisely chose to lay low on his return, surrounded by friends and family.

However, elbowed to join Chonto Herrera for a night out, Escobar chose to go and braved a night on the tiles for the first time since the ill-fated World Cup.

Despite advice to keep a low profile, Escobar insisted that he wanted to “show his face” to his people, though his openness of spirit would ultimately be his undoing.

Escobar was enjoying a few drinks in the El Indio Bar in Medellín when another group began to sling insults his way. When Escobar left, the same group followed him outside to continue their tongue-lashing and when the Colombian international confronted them to put his case across for his “honest mistake” from his car window, he was shot six times and killed.

When the drug-trafficking Gallón brothers, Pedro and Juan, were collared for the crime, one of their bodyguards Humberto Castro Muñoz stepped forward to confess to the crime himself and was later sentenced to 43 years in prison, though he would serve only 11.

Andres Escobar’s funeral was attended by the masses in Medellín as weeping fans mourned the brutal murder of one of the nation’s favourite people. Indeed, an estimated 120,000 people attended the solemnities, and the anniversary of his death is still marked at matches in Colombia each year. The city unveiled a statue of its fallen son in 2002.