The disciplinary rules in football are pretty simple. If a player commits a bookable offence, he is given a yellow card as a caution. Should that player commit another offence, he receives another yellow card that results in a red card. And in that case, the player is automatically heading for an early shower. But in some instances, it would seem that three yellow cards are given to the same individual before the red card is produced. Actually, this only occurred one time in the entire history of the World Cup, and the unfortunate referee that committed this mistake was Graham Poll.

Despite being a successful referee in the Premier League, and enjoying a career that spanned 25+ years, he will forever be remembered as ‘that guy who handed out three yellow cards’. Perhaps more unfortunately, he committed such an error on the biggest stage in football, the World Cup. This happened in the 2006 World Cup during a game involving Australia and Croatia, and it’s something that football fans will never forget. 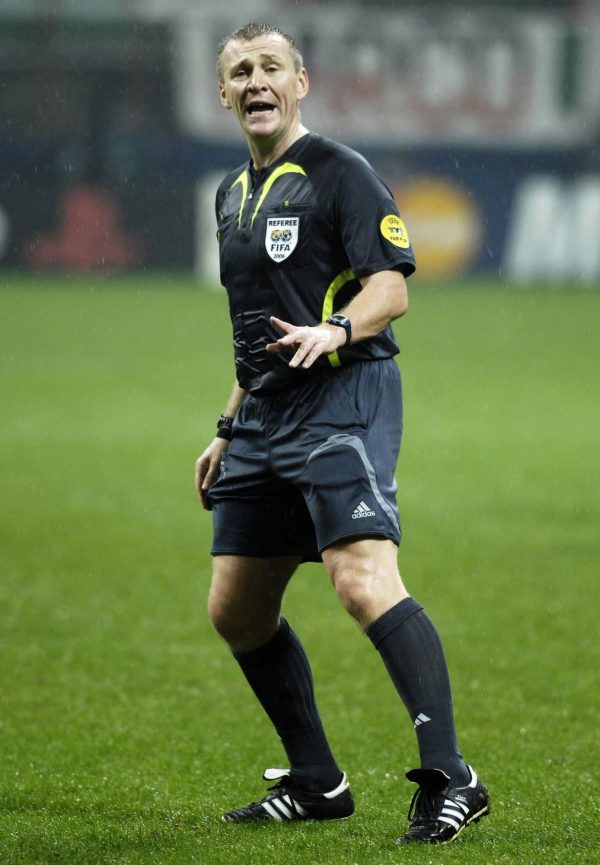 Poll made this error in the final group game, with both teams bidding to qualify for the knockout stages in the event. The match ultimately finished 2-2, and Australia progressed through the knockout stages. This was an absolute blessing looking back, as it was Croatia who benefited from one of their players remaining on the field when he should have been sent off.

Of course, this is just the general overview of what went down in that match. There are other details that we’d like to share on top of this, so let us get started.

Before we get into the specifics of the three yellow cards given during this game, we feel it’s only fair to talk about Graham Poll in a positive way, first and foremost. After all, he is one of the most decorated and respected referees in the game, at least until he made this mistake at the 2006 World Cup. But before this occurred, Poll had a great career as a referee in England. He was there at the very beginning of the Premier League, as he was shortlisted to referee top-flight games back in 1993. Prior to that, he had still been refereeing games in what was known as the ‘First Division’.

Of course, his track record as a successful referee was what led to his entry into the shortlist for Premier League referees. And Poll would prove to the Premier League that this was a good decision on their part. He refereed over 1,500 matches during his career, and he handled top-level matches for a grand total of 26 years. Poll wasn’t a primary referee for his entire career, but he built himself up from being an assistant referee into the man in charge, so you have to respect that.

Graham Poll also became ‘FIFA listed’ in 1996, which meant that he was able to referee games that took place in FIFA-sanctioned tournaments. Naturally, this allowed him to referee games in the World Cup too. He refereed the main event for the World Cup on two separate occasions – once in 2002 and the next one in 2006. But sadly, because of the error made in this World Cup clash involving Croatia and Australia, he decided to retire from international refereeing.

So there you have it – an overview of the famous game where Poll dished out three yellow cards, as well as his background as a referee. However, since the focus here is to share the story of these three yellow cards, it’s necessary to provide a rundown of what happened that day. All of these curious details are shared below.

Given that Poll handed out three yellow cards to the same player, there has to be an individual behind the story. And that individual was the Croatian defender, Josip Simunic, who had absolutely no hand in the three yellow cards in terms of misleading the referee. So before we all view Simunic as the evil genius in this story, we should stress that this couldn’t be further from the truth. As it happens, there is something about Simunic that may have caused confusion for Graham Poll, however, which we will get to a little later.

But for now, all you need to keep in mind is that the player receiving the cards was Josip Simunic, one of the Croatian defenders.

Since Poll dished out these three yellow cards to the same individual, the first card had to come at some point during the match! And it was in the 61st minute that Poll first showed a yellow card to Simunic. This was issued for a pretty feisty challenge made on one of the Aussies, so Poll, rightly so, reached into his pocket and issued a yellow card. So to ensure that you are also keeping track, make sure you jot down one yellow card issued at this minute of the match.

Of course, this is where the problems started. In any other football game, this would mean that one more yellow card given to Simunic would result in his dismissal. So if he was to step beyond the rules one more time in the match, Poll should send him off. As it happens, Simunic did commit another bookable offence, but much like a cat – he was given more lives than he perhaps should have.

At the very end of the game, Poll reached into his pocket to issue a second yellow card to Simunic. This occurred in the 90th minute for another bad challenge. And like many other referees before him, Poll went on to jot down the player's name and jersey number on the yellow card. But then, much to the disbelief of players, in-stadium spectators, and viewers all around the world, Poll never grabbed the red card from his pocket. Instead, he put the yellow card back into his pocket and Simunic remained on the field.

At this point, it looked like Simunic had escaped the rules of the game due to a major error by Poll. However, as fate would have it, Simunic ultimately did get sent off, but not because Poll realized the error that he had just made. That’s why this story is so interesting, which brings us to the third yellow card. 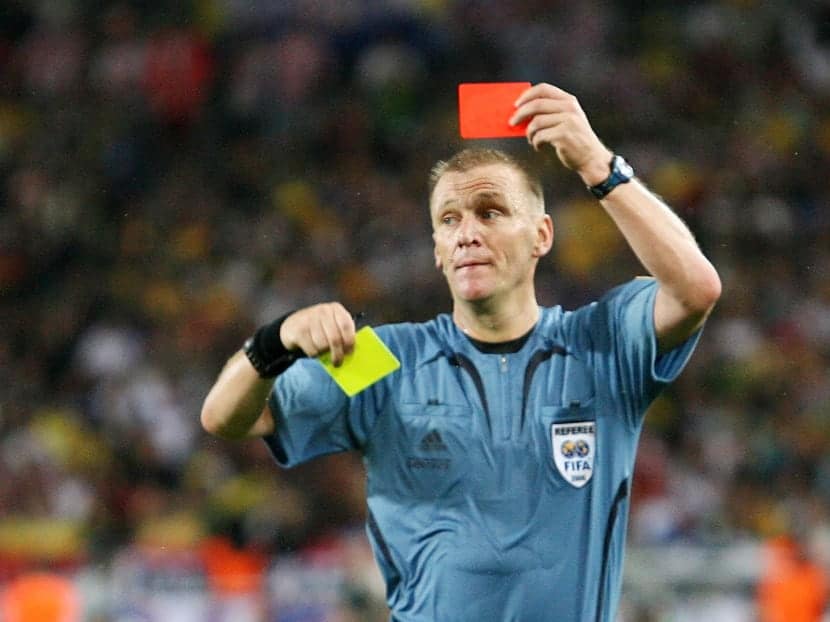 If you really wanted to get away with being carded twice while remaining on the pitch, surely you’d keep your head down and go on like nothing had happened? Well, Simunic didn’t quite follow that chain of thought. Instead, he continued to protest the decision that Poll had made, instead of running in the other direction and avoiding Poll’s gaze. His protest against the bookable offence then resulted in Simunic shoving Poll, which is obviously a bookable offence in itself. Because of this, Poll reached into his pocket and produced the third yellow card against Simunic.

Subsequently, he put up the red card in front of Simunic’s face and he was ultimately sent off. However, at this point, the damage had been done. The mistake of handing out three yellow cards had been witnessed by the entire world, as well as the powers that be at FIFA.

How did this happen?

Poll would not realize what he had done until the game had finished. And when he did in fact see the error, he immediately requested to withdraw from the tournament and travel home. This was honoured by FIFA, but there was still a huge question that remained unanswered – how did he manage to book the same player three times? Believe it or not, the answer is actually a story of coincidence instead of an epic refereeing blunder. 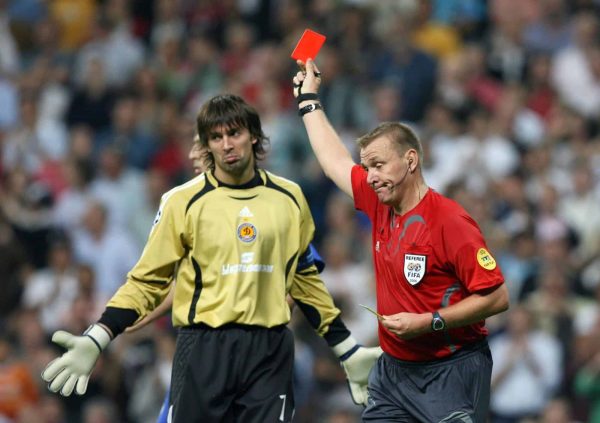 In interviews that followed the match, Poll explained how this occurred. Basically, Poll used a system for booking players where he would split the teams into two columns. He would then write the player's name and shirt number down in the respective team column when booking them. Here’s where the error displays itself. By complete coincidence, Simunic, while playing for Croatia, was born in Australia. He lived there until the age of 19, and because of this, Simunic spoke with quite an obvious Australian accent.

So in the heat of the game, Graham Poll put the first booking down as an Australian yellow card for their number 3, Craig Moore. Of course, the jersey colour should have been enough for Poll to get it right and put this booking in the Croatian column. But you can kind of understand how this mistake may have occurred, especially with the tension and chaos of World Cup football. It’s a mistake that could easily occur given the accent of Simunic.

However, on the flip side, you’d have thought that a referee with the experience of Poll would have avoided such a big blunder. Anyway, the silver lining here is that the mistake did not impact the outcome of the match in any way, as it happened in the very last minutes.