If there is one word to describe Italian football, that word would probably be passion. And this has been the case for as long as Italy have competed on the biggest stages in world football. Of course, the World Cup is the pinnacle of these tournaments, and the 1982 tournament embodied Italian passion like no other. Specifically, we are referencing the famous celebration of Marco Tardelli in the 1982 World Cup final against Germany. His goal might not have been the winning goal, but his celebration stole the headlines.

In fact, his celebration has captured headlines and stories for a grand total of 40 years, since we are now on the cusp of the 2022 World Cup. This alone tells you how legendary his celebration was, and you can watch his celebration via the YouTube video shared below:

As you can see, this celebration demonstrates true elation, and it has even been named one of the top World Cup celebrations of all time. Subsequently, Italy went on to win that final game against Germany by a score of 3-1. And when Tardelli scored this famous goal, this took the Italians ahead by two goals (2-0). His goal came in the 69th minute in front of 90,000 fans, so we expect that this is a moment he will simply never forget.

But to truly grasp how special this goal and celebration were, you’ve got to understand Tardelli’s story. So let us cover that before we get into the juicy details of his celebration.

An introduction to Marco Tardelli

Marco Tardelli was a midfielder/defender for the Italian national squad through the 70s and 80s. He was born in Capanne di Careggine, Italy, back in 1954. Tardelli made his World Cup debut for Italy in 1978, and he subsequently competed in two more World Cup tournaments in 1982 and 1986. But as you’ve already seen, the 1982 tournament was the one that solidified Tardelli as a legend of the game. Perhaps more amazingly, Tardelli only scored 6 goals for Italy in his career, yet 1 of these 6 goals has gone down in history. 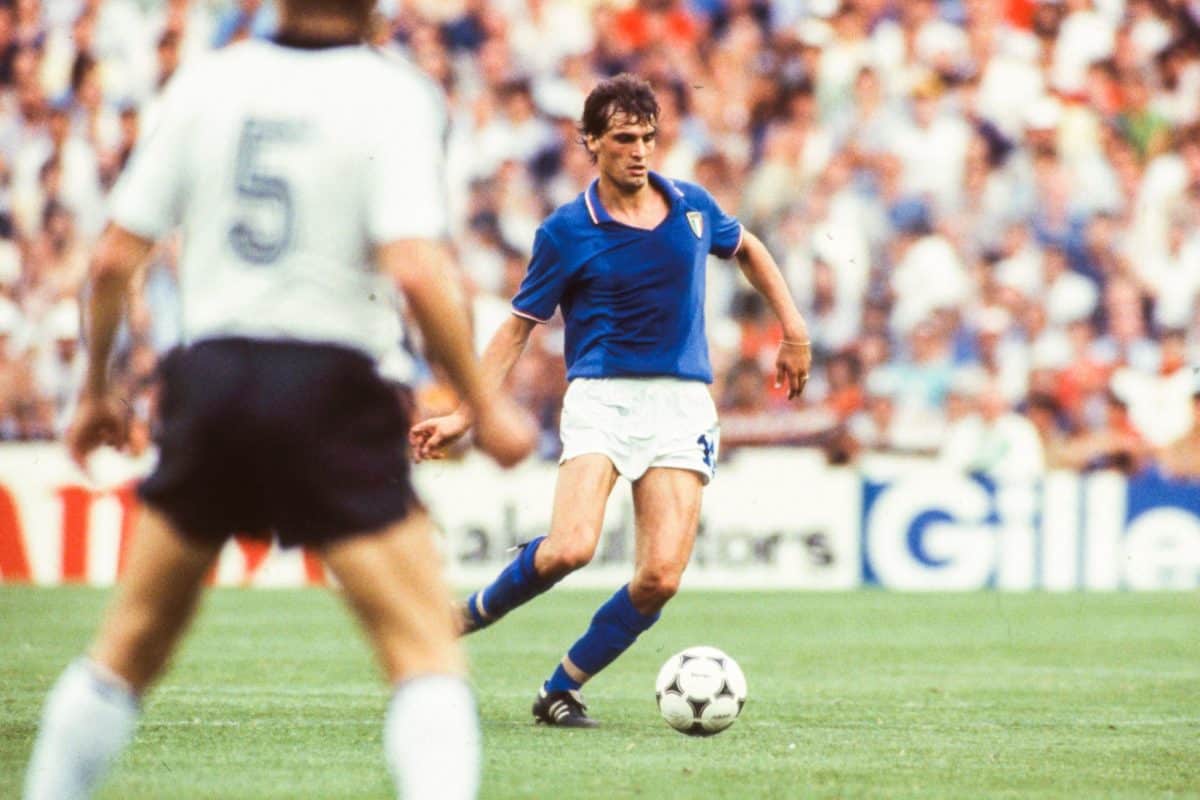 Bear in mind that Italy had strikers that scored far more goals than this, yet Tardelli overshadowed many of them with this one goal alone. With this in mind, it wasn’t just the international stage where Tardelli excelled. He also enjoyed a successful club career, mainly with Juventus, who he played for between the years 1975 and 1985. During this time, Tardelli scored 35 goals in 259 appearances – not bad for a guy who played mainly as a defensive midfielder.

As for his style of play, Tardelli was always known for being incredibly energetic. He also had immense endurance, as well as skill on the pitch. For this reason, many regard Tardelli as one of the top Italian players of his time for the midfield/defensive sections of the pitch. Despite this, nobody would have hailed Tardelli as a World Cup hero prior to 1982. Sure, he always played reasonably well for Italy, but to capture the hearts of fans all over the globe, you’ve got to do something special.

This brings us nicely to the main focus today – Tardelli’s 1982 celebration.

His iconic celebration – all the right ingredients

You’ve already seen the video above (we hope), but exactly why did Tardelli’s celebration go down in World Cup history? After all, the goal itself wasn’t phenomenal, although it was still pretty good. Yet the moment of the goal, the occasion, and the obvious ecstasy that Tardelli experienced on the field is what transformed this from a standard goal into something spectacular. Let’s look at the key ingredients of this celebration and identify why it became legendary right now.

One of the more interesting things about Tardelli’s goal was that when it went in, he instantly burst into tears. Quite literally within a couple of seconds of the goal hitting the back of the net, you could see tears streaming down his face. We’re all familiar with tears flowing after a big win, a devastating loss, or some other emotional occasion on the pitch. But this was the first time that many people had someone just explode with joy following a goal. There are plenty of pictures showing Tardelli with his fists clenched, mouth wide open, and tears galore as he stormed up the field after putting Italy up 2-0.

Tardelli himself has since been asked on numerous occasions what prompted the instant tears after the goal. And he claimed that when he scored, his entire life ran through his head, almost like an incredibly rapid movie. He even compared the feeling to what he imagined people might feel when they were close to death, which may seem a strange comparison, but it does make sense. Tardelli has also been documented as saying that he had dreamt about such a moment as a child, which made it all the more special – and emotional! 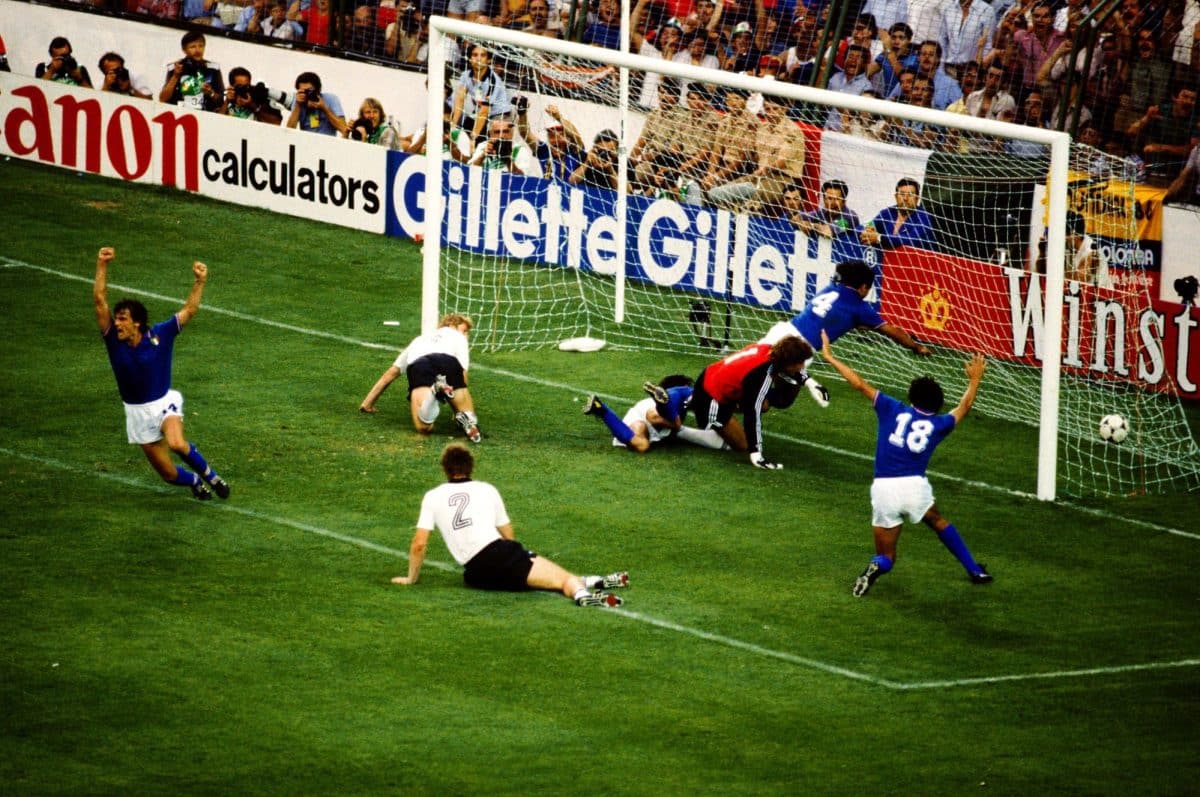 If you thought that the instant tears were immense enough, you’ve not seen anything yet. Of course, the entire world knew at that moment that Tardelli had scored a huge goal for Italy in the 1982 final. However, it would seem that Tardelli wanted to confirm what he had just done verbally. As he ran off down the field, God only knows where, he was visibly screaming ‘gol’. And as we are sure you can guess – this means ‘goal’ in Italian. Again, Tardelli doesn’t know why he was screaming goal, although the way he did it could be compared to modern-day commentators in certain parts of the world.

In fact, he was chanting it so rapidly while sprinting down the pitch that it’s amazing he could even catch his breath. This verbal outburst added a degree of emotion that even non-Italians would find impressive, and somewhat heartwarming.

If you were to ask any fan or colleague of Tardelli’s about his aura on the field, the one word that would often be on their lips is ‘energy’. He had an engine that just never seemed to run empty, and this was also a prime factor of his famous celebration. But how was this displayed? Well, the fact that Tardelli sprinted down the entire pitch after the goal tells you all you need to know really. After shooting the ball into the German goal, he rose to his feet and took off like an Olympic sprinter.

Tardelli confessed afterwards that he had absolutely no idea where he was running to. He just knew that he felt a burst of energy that he had to release, and sprinting down the pitch seemed like a good way to do this. Tardelli ran to the Italian bench on his journey, followed by some of the other Italian players. But nobody could catch him! His energy was just unstoppable at that moment, and the Spanish police even had to chase him and others down the touchline.

The last of the ingredients that we wish to talk about relates to his clear display of disbelief. As we’ve covered already, when Tardelli scored he burst into tears, started screaming goal, and sprinted down the whole pitch. But there was another element which we feel sums up the way in which he must have felt during the moment. As Tardelli ran down the field, he just would not stop shaking his head. It’s as though he knows what he has done, but he is almost confirming that this is indeed reality. One might even say that his perceived reality of what had just occurred showed a battle between mind and body. 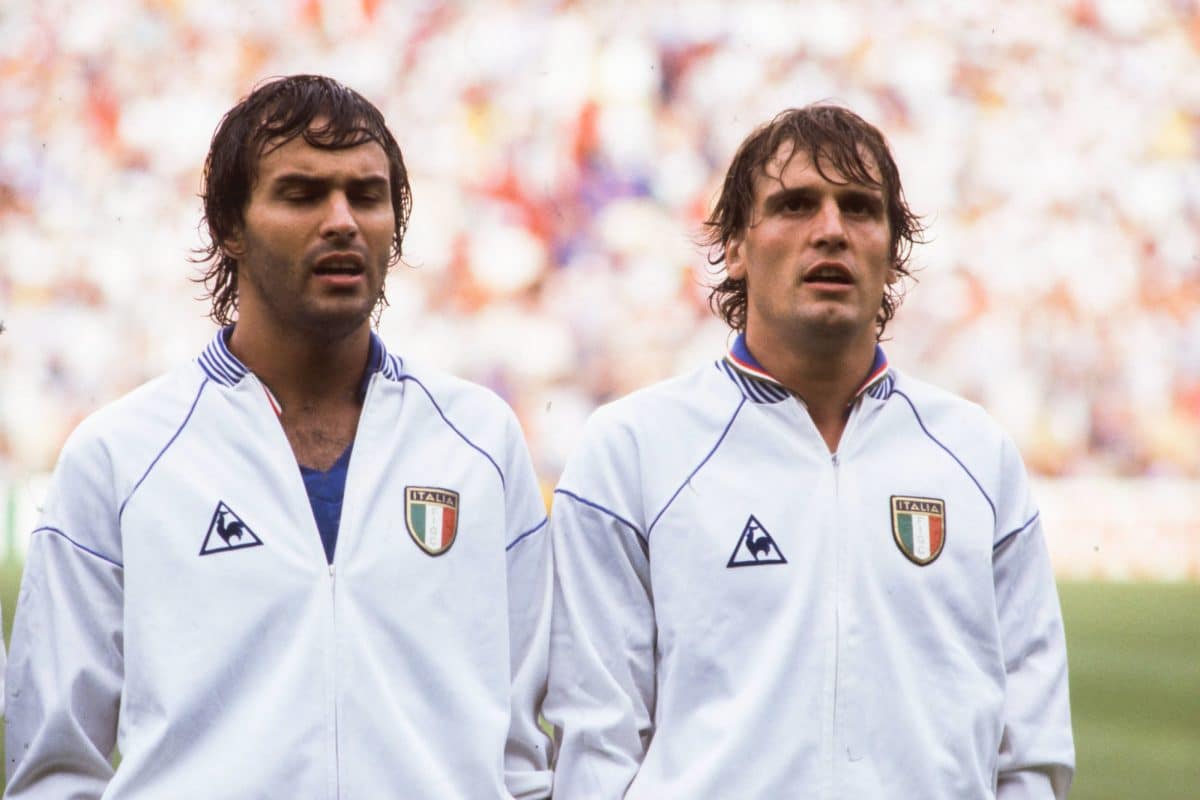 His mouth was screaming goal, yet his head was telling him that he was dreaming. Then again, who really knows the elation that he must have been feeling at that moment? But perhaps most amazingly of all, when Tardelli is asked about these gestures or his celebration, he states that he barely remembers. He was so overcome with emotion in the moment that he hardly has any recollection of his actions or anything else.

Everything that took place from the moment of the goal to the moment when he had to play again was a complete blur, Tardelli claims.

Why has it become so legendary?

We believe that the reason this celebration has become so legendary consists of two parts. Firstly, the celebration itself is something that you can just watch time and time again. It’s impossible to grow tired of watching Tardelli display all of these fabulous emotions in one surge of energy, even if this happened 40 years ago. And secondly, the celebration has become so famous because it’s one that warms the hearts of everyone who sees it, regardless of their national allegiances in football.

Even if you weren’t a huge fan of Italy in football, how can this celebration not make the hairs on the back of your net stand on end? It’s a display of sheer human elation, and it’s incredibly rare to see such a profound outpouring of emotion in front of millions of viewers.