In 1977, people were flocking in record numbers to watch Star Wars: A New Hope at cinemas, the radio waves were throbbing to the sound of ABBA’s Dancing Queen, the first Apple II computers were hitting the shelves and a certain Dutch footballer named Johan Cruyff was in his dazzling pomp.

However, just a year later in 1978 on the eve of the World Cup in Argentina, Cruyff had shelved his international career in a controversial decision that sparked several decades of speculation and debate about his motivations. 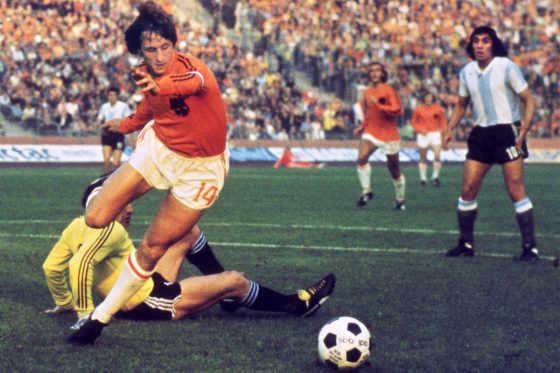 From the shady political landscape in Argentina and a reluctance to feed the propaganda machine of the country’s military junta to rumours about quibbles over bonuses and boot endorsements, hypotheses had been layered thick, though a more sinister reason emerged as the driving force behind Cruyff’s non-involvement at 1978 years later.

Before 1978, there was World Cup 1974 in West Germany. Cruyff was the creative fulcrum and conductor of the famed Totaalvoetbal (Total Football) Netherlands side of the era – arguably the best team of all time not to win silverware, something both Oranje supporters and football purists alike view as a tragedy.

With pioneering head coach Rinus Michels the architect, Cruyff alongside other Dutch luminaries like Ruud Krol, Rob Rensenbrink, Johan Neeskens, Johnny Rep and Piet Keizer bamboozled opponents with a fluid tactical system that allowed players to abandon traditional positional play to influence the game from different areas of the pitch.

In West Germany, the Netherlands were the World Cup’s outstanding team and they coasted to the tournament’s final. Cruyff had won the Ballon d’Or three times in four years between 1971 and 1974 and he added the World Cup Player of the Tournament to his tally of individual accolades in West Germany, though he was denied the opportunity to win the competition’s biggest prize. 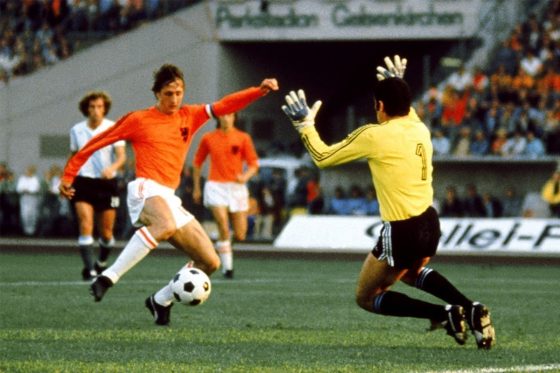 The Netherlands had won five of their six games en route to the final in Munich with victories over Argentina (4-0), East Germany (2-0) and Brazil (2-0) in the lead-up to the showpiece fixture at the Olympiastadion, in particular, cementing their position as overwhelming favourites to prevail.

In the final against the host nation, the Netherlands scored after just two minutes through Johan Neeskens. Beaten keeper Sepp Maier was the first West German player to touch the ball when he scooped the ball out of the net and though Neeskens’ early effort was supposed to spark a procession in Bavaria, the Netherlands felt flat instead.

West Germany had turned the game on its head by halftime, the Netherlands fell behind for the first time in the tournament, their confidence faltered and they never recovered.

Despite the heartache of defeat, slivers of optimism remained. The squad was young, Johan Cruyff himself was just 27 and they would be ready to banish the failures of ’74 by winning the pot in 1978. However, things were about to take an unexpected turn.

Grouped together with neighbours Belgium and ordinary Northern Ireland and Iceland outfits, the Netherlands breezed through the qualification phase for World Cup 1978.

Venerated coach Rinus Michels left and was replaced by Austrian Ernst Happel mid-way through the campaign, however, with Cruyff pulling the strings, results remained consistent and the Netherlands topped the group, recording five wins in six games. 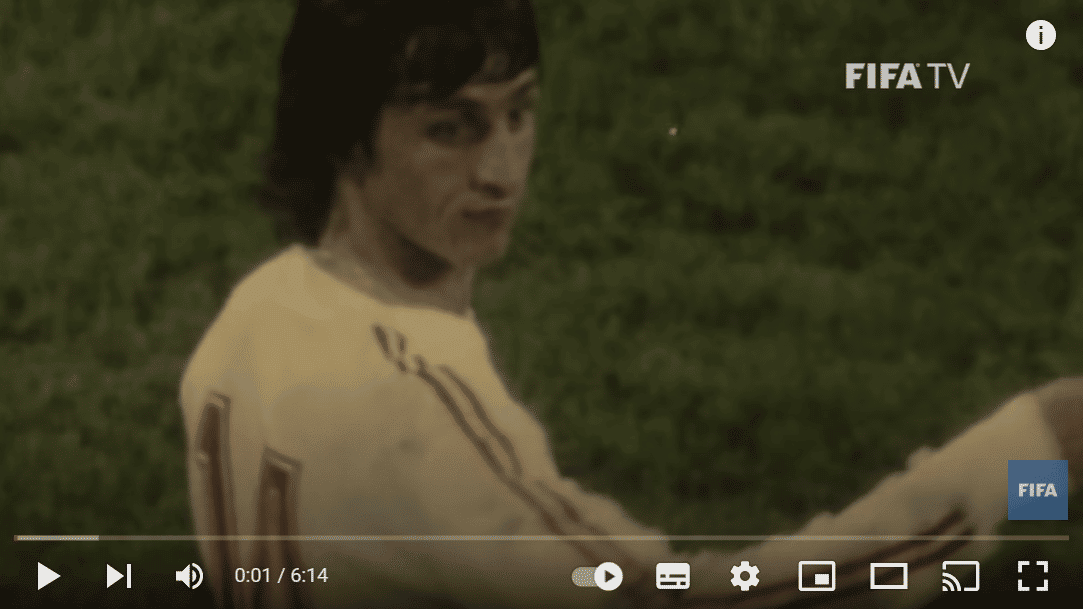 However, once the Oranje’s qualification was secured, John Cruyff dropped the biggest of bombshells when he announced his intention to retire from international football at just 30 years old.

His decision to step back from the international scene was a bolt from the blue and was considered a colossal blow to the Netherlands’ chances of finally lifting the World Cup the following summer in Argentina.

Immediately, people clamoured to apply logic to Cruyff’s decision to call it quits and from there, the rumour mill cranked into overdrive.

The most-hardened rumour about Cruyff’s retirement motivations that circulated at the time concerned the political landscape in Argentina. In 1976, just two years before the World Cup was due to be hosted there, a military junta led by Jorge Rafael Videla took control of the country in a violent Coup d’état.

With stories of multiple human rights violations seeping out of the country and thousands of dissenters disappearing in nefarious circumstances, the international community was angered at the decision to award the 1978 World Cup hosting to Argentina. However, despite the noises of indignation, none of the qualifying countries boycotted the tournament.

The Netherlands had been one of Argentina and FIFA’s biggest critics in the lead-up to the competition in 1978, however, after the Oranje had shown more bark than bite, many theorised that Cruyff might have been frustrated with his own nation’s refusal to follow through with their convictions, leading to the attacker’s retirement. 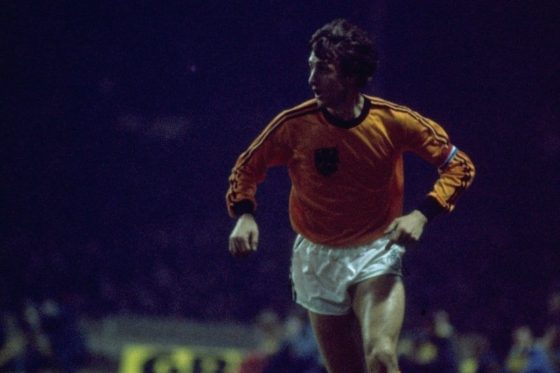 All the pieces seemed to fit. Cruyff had a track record of chiming in on political issues and a refusal to compete at a World Cup hosted by an oppressive regime was a protest that aligned with his character. When Cruyff signed for Barcelona from Ajax in 1973, he revealed that he was pleased that he didn’t join Real Madrid due to the club’s affiliation with Spanish dictator General Francisco Franco. Cruyff already had a track record for outspokenness and it wasn’t too much of a stretch to believe he was embarking on a one-man boycott of the 1978 World Cup in Argentina.

A second, more superficial reason, was also thrust forward to explain Cruyff’s motives. The Dutch superstar had a lucrative endorsement contract with Puma, while the Dutch national team was sponsored by rivals, Adidas. The rumour suggested that friction between those sports apparel giants pushed Cruyff to retire ahead of the World Cup, but even now, that idea seems borderline outlandish.

In 2008, a book written by Cruyff’s former Barcelona teammate, Carles Rexach, also touched on the subject and asserted that it wasn’t Videla’s Argentina or boot deals behind Cruyff’s retirement, but pressure from his wife and family instead.

In his tome, Rexach says Cruyff’s wife Danny told Johan that she couldn’t handle being away from him for a month and the Netherlands captain chose to stay with his betrothed instead of leading his country in another World Cup.

However, shortly after, Cruyff himself unravelled the mystery that had taken three decades to solve.

Cruyff and the attempted kidnapping that ended his international career

In a deeply revealing interview with Barcelona’s Radio Cataluyna in 2008, Johan Cruyff removed the veil of secrecy that had hung over his decision to quit the Netherlands team ahead of World Cup 1978 and the reason was rooted in more malevolence than anyone had anticipated.

Cruyff detailed the account of an attempted kidnapping of him and his family in their home in Barcelona in 1977. “I had a rifle at my head, I was tied up, my wife tied up, the children were in the apartment in Barcelona,” he said.

The three-time Ballon d’Or winner didn’t reveal how the ordeal ended; however, he did say that his family home was placed under strict police protection for the next four months and that his children were accompanied to and from school by the same officers.

With concern for his family’s well-being of paramount importance, Cruyff insisted that travelling to compete at a World Cup in far-flung South America was out of the question.

“To play a World Cup you have to be 200%,” said Cruyff. “There are moments when there are other values in life.”

“The police slept in our house for three or four months. I was going to matches with a bodyguard. All these things change your point of view towards many things. We wanted to stop this and be a little more sensible. It was the moment to leave football and I couldn't play in the World Cup after this.”

Cruyff went on to retire from football completely in 1978, albeit briefly, and at 31 the Dutchman and his family started afresh with Los Angeles Aztecs in the North American Soccer League before returning to Europe with Levante in 1981.

The Netherlands meanwhile, carved out a route to the World Cup final again in Argentina under Ernst Happel – a feat deemed impossible without the enigmatic Johann Cruyff in tow – however, the Oranje’s dreams were shattered again in the final by the host nation in a 3-1 defeat to Argentina after extra time.

Johann Cruyff’s absence from the team was lamented in the aftermath with many insisting that the Netherlands would have won had their famous number 14 been along for the ride. Nevertheless, the second dose of World Cup final despair suffered by the Dutch in Argentina signalled the end of the Totaalvoetbal era.

The Netherlands have only reached one World Cup final since (2010) and although they did manage to enjoy a glimmer of success at the European Championship in 1988 with Marco van Basten, Ruud Gullit and Frank Rijkaard, they are still widely considered perennial underperformers on the international stage.