The decision to award the 1994 World Cup to the USA – a nation that had traditionally treated “soccer” with indifference – ruffled more than a few feathers, though the tournament held stateside would eventually produce some remarkable moments, one of which centred around Diego Armando Maradona.

The 33-year-old would play just 173 minutes at the World Cup before he was sent home in disgrace after a failed drugs test, though Maradona’s tale of banned substances would be heavily wrapped in rumour, intrigue and conspiracy theories.

USA search for a star 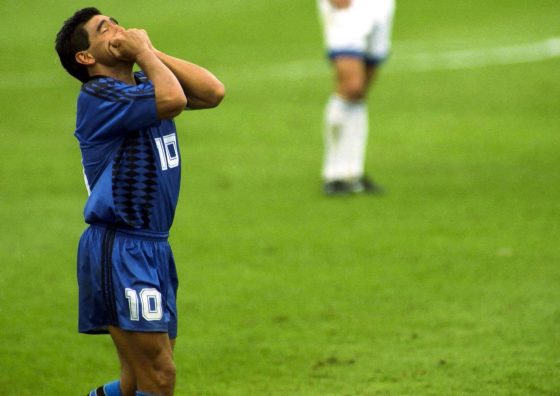 USA’s bid to host the 1994 World Cup preceded the launch of Major League Soccer in the country and came thirty years after the ballsy but ultimately failed North American Soccer League. The beautiful game just wasn’t all that appealing to sports fans across the nation – something that officials and delegates knew when they were handed responsibility for the 94 World Cup in the summer of 1988.

Plenty of big-name teams had made the cut for the finals in the United States, though the tournament seemed short of headline acts from an individual perspective, and rumours indicated that FIFA approached Diego Maradona – who was retired from international football – in a bid to coax El Pibe de Oro off his deckchair and back onto the pitch.

It was believed that Maradona’s name was still stellar enough across the globe to make the World Cup more “sellable” to American audiences and the same gossip suggested that FIFA were prepared to ignore the veteran’s drug issues if he could get himself back in shape in time to play for Argentina.

At the time, a portly Maradona was wheezing around pitches in his homeland for Newell’s Old Boys in between cocaine and pizza binges, though he would start necking an energy drink called “Rip Fuel” to power his push for prime fitness.

That dodgy syrup would be a key prop in Maradona’s downfall just months later.

Maradona’s addiction to cocaine has been well publicised and his dependence on marching powder is said to have started as far back as 1983, shortly after he swapped Argentina for the far-flung fields of Barcelona.

Homesick and wracked by loneliness as a young man, Maradona turned to cocaine as a way to self-medicate and he was fully hooked on the stuff by the time he signed for Napoli in 1984.

During his time in Naples, links between Maradona and the city’s mafia, the Camorra, were never far away, while stories about prostitutes and cocaine use were common.

Around the time of the 1990 World Cup in Italy, Maradona’s issues were starting to spiral out of control and he tested positive for cocaine after a league game during the 1990/91 campaign and was punished with a ban that would span 15 months.

Napoli eventually let Maradona leave to join Spanish side Sevilla on loan, though his motivation diminished, he piled on the weight and eventually took himself back to Argentina with Newell’s Old Boys in 1993 a – just 12 months before the World Cup was due to kick off in the United States.

Indeed, in the club campaign before the 1994 World Cup, Maradona played just five times for Newell’s, making his call up and return to Argentina’s national team set up all the more surprising. 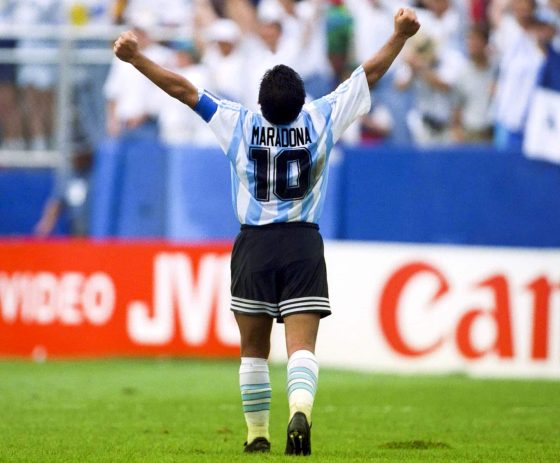 Maradona returns to the international scene

Argentina had toiled in their South American qualification group and they missed the automatic cut for the 1994 World Cup when they were beaten to top spot in their section by Colombia.

They had lost 5-0 at home to the rampant Colombians near the end of their campaign, though enough results were cobbled together elsewhere to earn La Albiceleste a last shot at making the finals through the playoffs.

Head Coach Alfio Basile was feeling the strain and the clamour from the public to send out the SOS call to Maradona was eventually answered when the ageing hero was drafted back in. Though Diego's negotiations with FIFA behind the curtain were also a determining factor.

Maradona played and captained Argentina in both legs against Australia in the playoffs, helping his nation to secure a vital, if unconvincing 2-1 victory and with it a place on the plane to the United States. 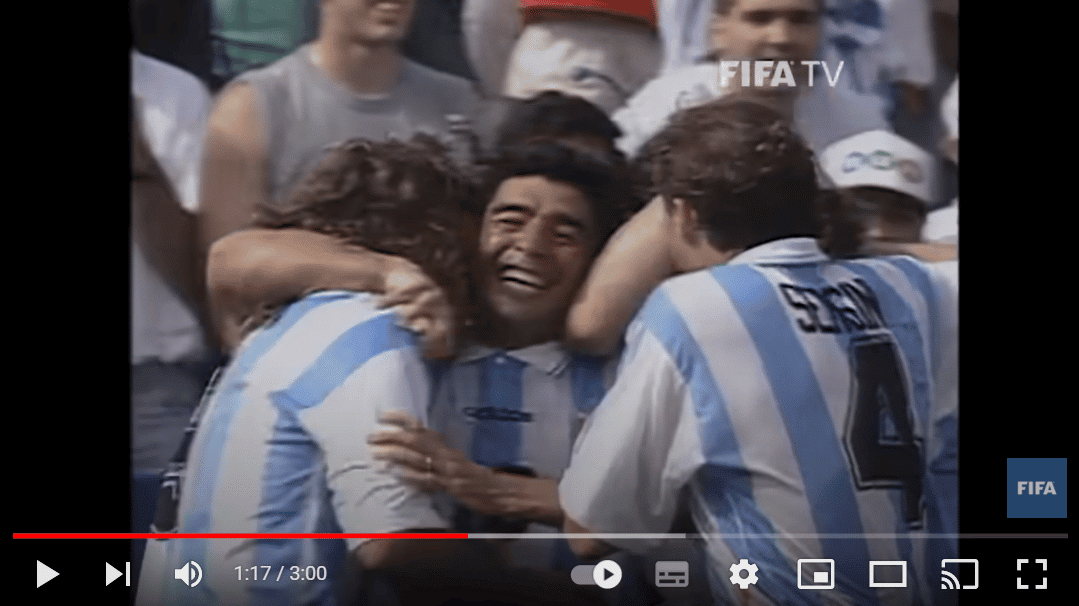 However, that out-of-the-blue comeback was almost short-lived. The second leg of Argentina’s playoff was in November but by February 1994, Maradona had withdrawn from the squad again, lamenting that he was struggling to cope with the pressure and weight of expectations on him from the public.

In response, the country’s press loitered around his house for two days to grill Maradona about his decision. The troubled star didn’t offer an explanation, though he did open fire on the journalists with an air rifle. The police were summoned and those wounded eventually took action against Maradona.

It seemed then, that Maradona would not make it to the World Cup after all, though new rumours started to circulate to suggest that FIFA were ready to offer the midfielder immunity from drug testing procedures in the US, in their desperation to add that big name to the line-up, though the reports seemed incredibly far-fetched.

Whatever his real motivations, Maradona did agree to play and he was named in Argentina’s 22-man squad for World Cup 94.

Argentina’s squad contained Gabriel Batistuta, Claudio Caniggia, Fernando Redondo and Abel Balbo, however, Diego Maradona was understandably the star attraction. His Lazarus-style rebound and eye-catchingly slim physique were the talk of the town in Foxborough, Massachusetts ahead of La Albiceleste’ Group D opener against Greece.

Again, Maradona was handed the captain’s armband he played a key role in an emphatic opening victory for the Argentineans. Already two up and in cruise control, Argentina swarmed forward in numbers just before the hour mark. Maradona picked up a square pass at the edge of the Greek box and steadied himself with an assured touch before lashing the ball high into the top corner past keeper Antonis Minou.

Maradona tore off to his left, wide-eyed, screaming and staring like a man possessed directly into a waiting camera, creating one of football’s most iconic celebrations. The deranged look on his face would later be used by his detractors as evidence to illustrate how Maradona was off his rocker at the tournament.

Argentina eventually added a fourth goal through hattrick hero Gabriel Batistuta, but Maradona was the premium headline writer and he would lead his nation into battle again on matchday two against Nigeria at the Foxboro Stadium.

The formidable Africans took an early lead through Samson Siasia, though Maradona played a part in a well-worked free kick that helped Claudio Caniggia to equalize not long after. Caniggia scored again seven minutes later just before the half hour mark and the scoreline would remain at 2-1 for the rest of the contest.

With two wins from two games, Argentina were through to the next round and like his teammates, Diego Maradona was on a high, though he was about to suffer the clammiest of comedowns.

While still in the euphoric throes of victory on the pitch, Maradona was approached by a medical nurse, taken by the hand and escorted to a drug testing area in a bizarre spectacle. Generally, testing of sports stars is done with a far softer hand and though Maradona smiled and waved to the crowd as he was led away, behind his grin there must have been a surge of panic.

Then came a wall of silence, however, behind the scenes there was plenty afoot. Maradona had tested positive for the banned substance ephedrine, though confirmation was sought from a second sample before the news would be made public.

Argentina prepared as best they could during their wait and they even named Maradona in the starting XI for their final group match against Bulgaria on June 30th. Appearing in his fourth World Cup, Maradona was due to set a record of playing in 22 matches in the tournament.

However, the day before, on 29 June, the announcement came. Sepp Blatter shared the news, saying: “Both analysis of the urine sample have proved positive. The player Diego Maradona of the Argentinian national team has therefore violated the conditions of the doping control regulations, in the match Argentina, Nigeria.”

Jim Trecker, a spokesman for World Cup ’94 was keen to brush past it as best he could, saying that the controversy would not dampen the positivity the tournament had created in the US. “It certainly is a pity when something off the field becomes bigger than on the field,” he said, adding that it will not cast the tournament in a negative light.”

Pushed to comment on the positive test shortly after, Maradona told a Buenos Aires television station: “It’s my fault. I did it. It’s me.” 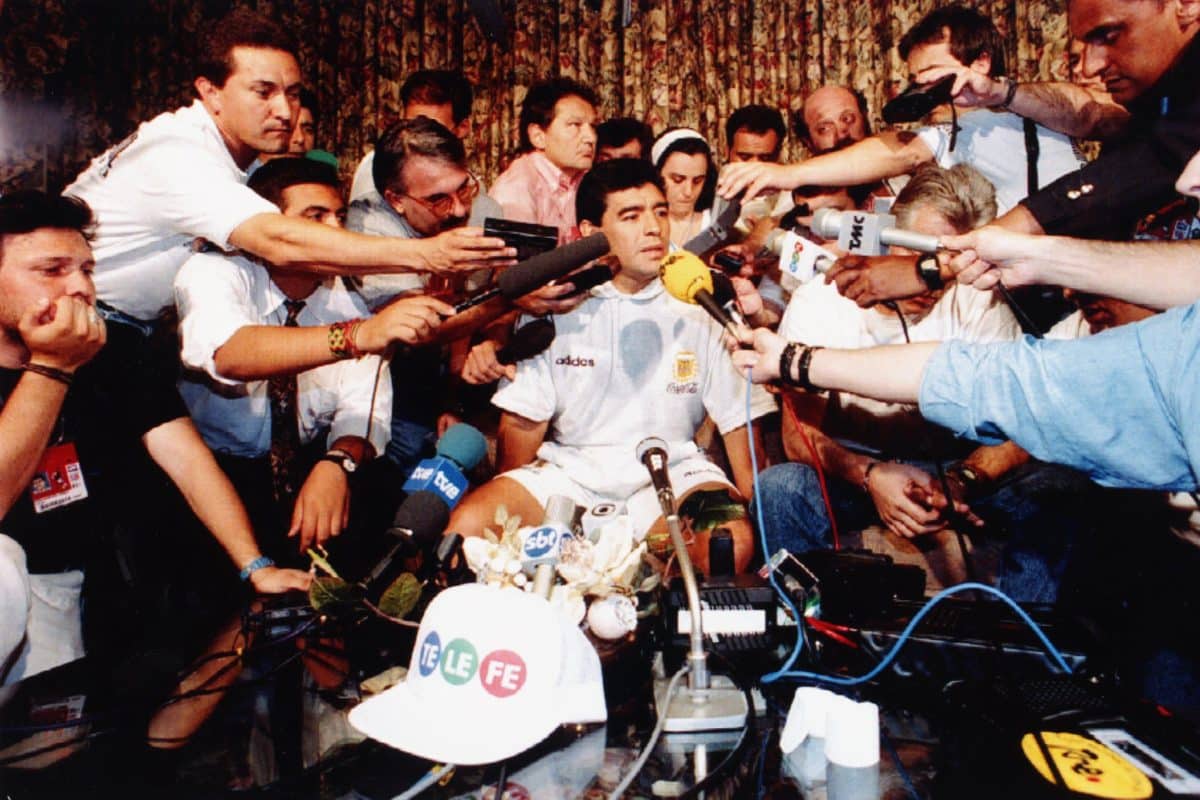 Mayhem ensued after Maradona’s positive test and blame began to be apportioned by all, starting with Argentinean Football Federation president, Julio Grondona, who said that the drug (ephedrine) was in a nasal spray prescribed to Maradona by his personal physician and not the official team doctor.

Later, the energy drink Rip Fuel would be put forward as the hidden perpetrator in Maradona’s own autobiography. Maradona had been necking the liquid in Argentina where the version of the drink didn’t contain any ephedrine. However, when his supply ran out in America, the US brand was bought instead, which unfortunately for Maradona, was full of ephedrine.

Whatever or whoever the culprit, Maradona’s fate was sealed and he was duly banned from the tournament and swiftly exported back to Argentina.

Rocked by the developments, Argentina lost their final group match to Bulgaria (2-0) and they joined Maradona back in their homeland not long afterwards after they were bested in a five-goal thriller by a dangerous Romanian team in the Round of 16.

Maradona’s failed drug test signalled the end of a 17-year-long international career and the cap he claimed against Nigeria was the last of the 91 he won for Argentina across three decades from the late 70s to the mid-90s.