When you’re tuning in to absorb the drama on the third and final matchday of the 2022 World Cup Group Stage in Qatar, the fact that the last set of fixtures in each section will be played simultaneously probably won’t register with you as all that significant.

I mean – of course, the final group games are contested at the same time, why wouldn’t they be?  With so much potentially on the line, concurrent kick-offs help to ensure every team gets a fair crack of the whip so to speak and they lessen the chance of last-day dead rubbers while removing the opportunity for two conniving teams to deliberately eliminate another.

However, it wasn’t always thus. Indeed, a single Machiavellian meeting between West Germany and Austria in 1982 inspired FIFA to rewrite the rules. 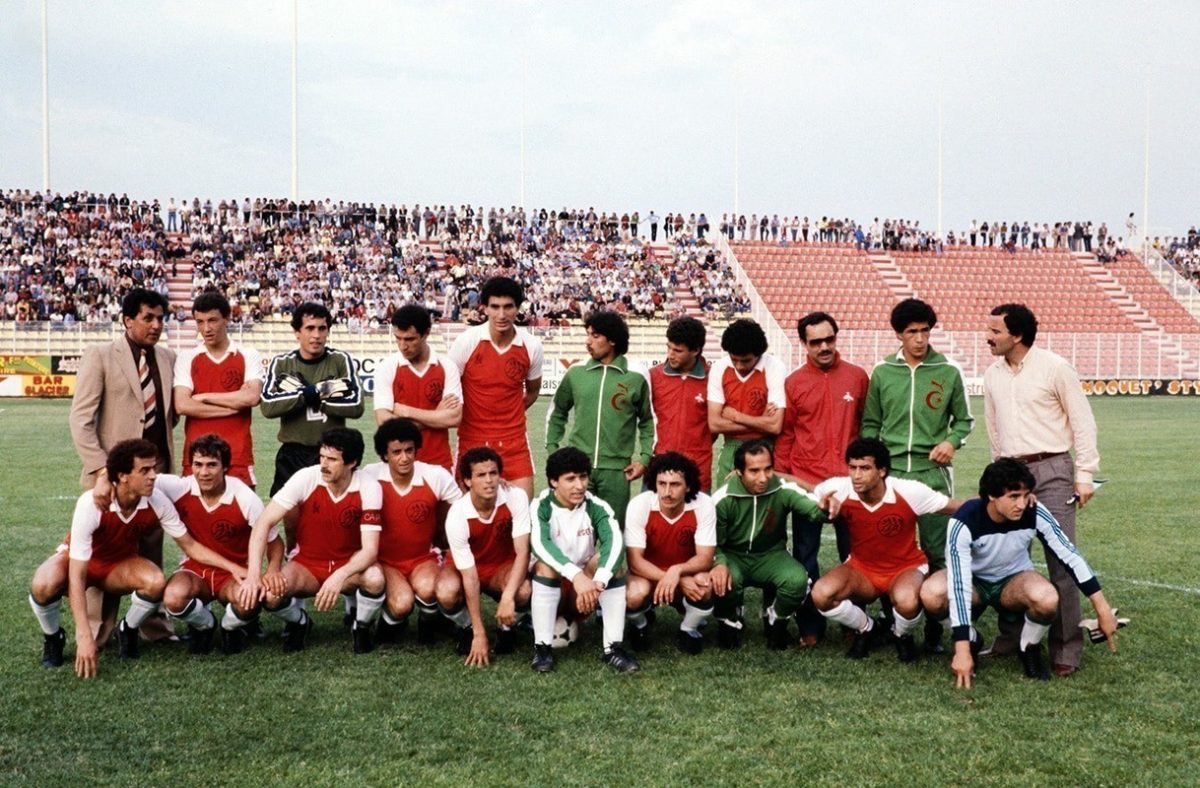 West Germany landed in the Iberian Peninsula as one of the pre-tournament favourites. The World Cup winners of 1974 and reigning European champions cantered to qualification with a perfect winning record and with stars like Paul Breitner, Karl-Heinz Rummenigge and Lothar Matthäus in their ranks, they had every reason to be confident.

That confidence turned to arrogance in the build-up to their Group 2 opener against Algeria at the Estadio El Molinón on June 16th, however. The West Germans were gallingly dismissive of the Algerians’ chances and in pre-match pressers and they openly humiliated the Africans with unkind barbs aimed in their direction.

“We will dedicate our seventh goal to our wives, and the eighth to our dogs,” laughed one player, while the West German manager, Jupp Derwall, sneered that he would “jump on the first train back to Munich” if his team was turned over. 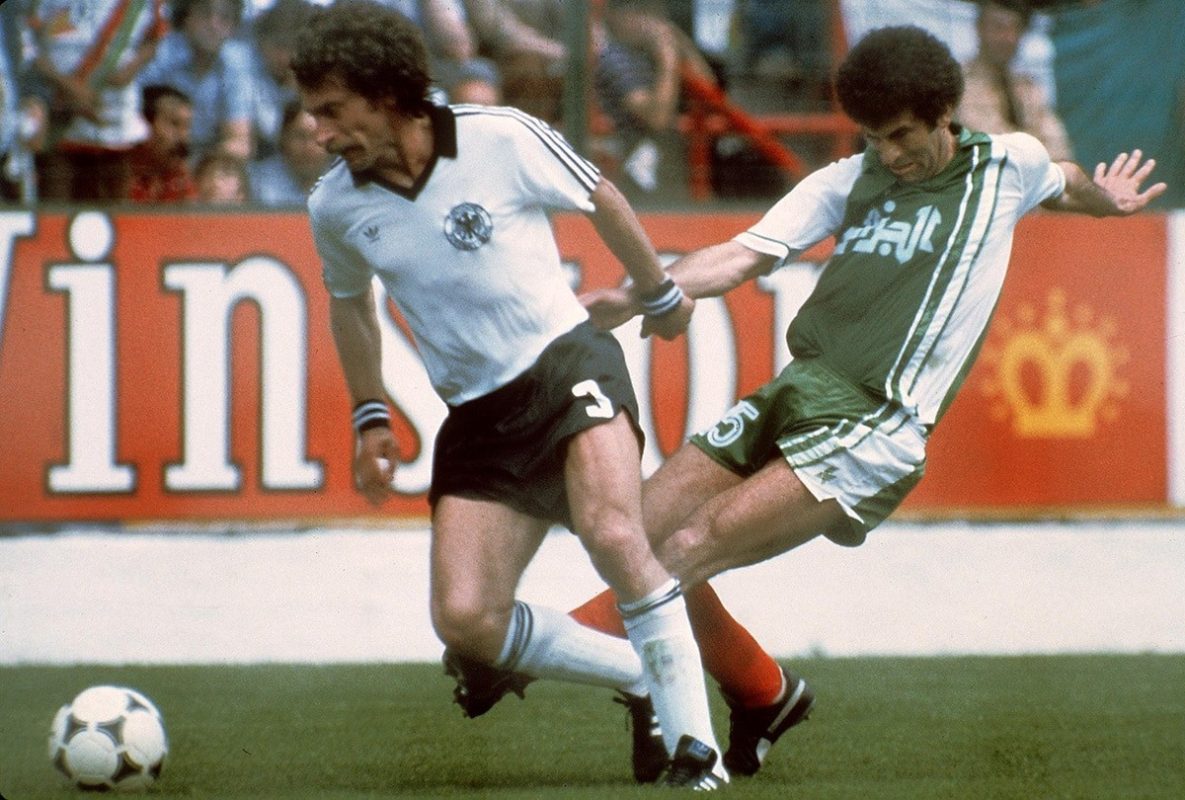 While the German’s chutzpah was nauseating, they had some reason to believe that Algeria would provide weak opposition. At that point in World Cup history, only a quartet of African nations had played in the tournament proper before and all four made little impact (Egypt (1934, R1), Morocco (1966, R1), DR Congo (1974, R1), Tunisia (1978, R1).

15 members of Algeria’s squad still played in the nation’s domestic league due to a ruling there at the time that prohibited players from leaving the country before turning 28, while seven of the same combatants had never won a single international cap.

However, had West Germany’s preparations been more professional, they’d have caught wind of Algeria’s superb pre-tournament performances which included victories over the Republic of Ireland, Real Madrid and Benfica. They might also have witnessed some of the breathtaking attacking football that would catch them cold in the summer heat.

Ahead of kick-off in Gijon on June 16th, the German players held the posture of cigar-smoking business executives admiring their own magnificence, though they were soon knocked out of their stupor by a brilliant Algerian display.

With rampaging full-back and man of the match, Chaabane Merzekane, dazzling down the flank, Algeria served up a stew of skill and swagger that West Germany just couldn’t digest.

Rabah Madjer gave the Algerians a deserved lead after 54 minutes and though Karl-Heinz Rummenigge managed to equalize for the Germans in the 67th, Algeria restored their advantage almost immediately through Lakhdar Belloumi and they held their lead to the final whistle, becoming the first African team to beat a European side during a World Cup. The result reverberated across Europe and the rest of the world, sparking incredible celebrations in Algeria and winning the team a new army of well-wishers. Afterwards, match-winner Belloumi refused the opportunity to dig the West Germans out, despite their insults, saying “We respected the German team and we respected their country, we were just delighted that we had also made them respect ours”.

The cocktail of euphoria and adrenaline in the victory’s aftermath seemed to drain some energy out of Algeria on matchday two however, where their lack of experience showed in a 2-0 reverse to Austria, however, they regained focus by June 24th and carved out a topsy-turvy 3-2 triumph over Chile at the Estadio Carlos Tartiere, Oviedo, leaving them on the cusp of qualification for the knockout round the of the 1982 World Cup – on the 20th anniversary of Algeria’s independence.

A wonderful story was about to unfold, or so everyone thought.

The Disgrace of Gijon

Algeria’s win against Chile on June 24th left them in a comfortable position in Group 2 behind leaders Austria and two points ahead of West Germany, who were languishing in third spot.

A day later on 25th however, West Germany and Austria met in Gijon to conclude their own group campaigns, where the friendly neighbours and cultural bedfellows knew that a 1-0 or 2-0 victory for Die Mannschaft would earn places for both teams in the next phase of the World Cup at Algeria’s expense.

After just eight minutes of the tussle, Horst Hurbesch put West Germany in front, however, what unfolded directly after the 31-year-old forward’s strike sparked widespread derision.

With their destinies intertwined and the scoreline mutually beneficial, both West Germany and Austria, for all intents and purposes, stopped playing.

The teams took turns to casually stroke the ball about in their own halves, making a mockery of the World Cup’s sporting integrity as they refused to attack in a case of blatant live-action match-fixing.

Inside the El Molinón, supporters were apoplectic and shouted “Fuera, fuera” (out, out) while others waved banknotes in disgust, with dodgy dealing and unscrupulous financial exchanges the implication.

Back in Germany, TV commentator Eberhard Stanjek lamented: “What is happening here is disgraceful and has nothing to do with football. You can say what you like, but not every end justifies the means”, before refusing to speak over the game any longer.

However, those directly involved played out time against the cacophony of disapproval and when Scottish referee Bob Valentine blew his whistle for the last time, both West Germany and Austria were through and Algeria were out.

Despite the broad criticism of their actions, both West Germany and Austria seemed unperturbed in the days that followed. When German supporters amassed at the team’s hotel to make their feelings known, the players opened fire at them with a volley of water bombs from their balconies.

Head of the Austrian delegation, Hans Tshak, let loose with even more venom when pressed on the issue, saying:  “Naturally today's game was played tactically. But if 10,000 ‘sons of the desert' here in the stadium want to trigger a scandal because of this it just goes to show that they have too few schools. Some sheikh comes out of an oasis, is allowed to get a sniff of World Cup air after 300 years and thinks he's entitled to open his gob.”

German manager Jupp Derwall remarked, “We wanted to progress, not play football,” while captain Lothar Matthäus asserted: “We have gone through, that is all that matters.”

Naturally, the Algerians were incredulous about the underhanded developments, though the appeal they lodged which included a request for a replay was turned down by FIFA.

The players themselves viewed circumstances through a different lens, however, at least according to Chaabane Merzekane, who said: “We weren't angry, we were cool. To see two big powers debasing themselves in order to eliminate us was a tribute to Algeria. They progressed with dishonour, we went out with our heads held high.”

Alongside Algeria’s own request, FIFA fielded numerous calls from elsewhere to organise a replay, however, the world’s governing body wouldn’t entertain the idea. 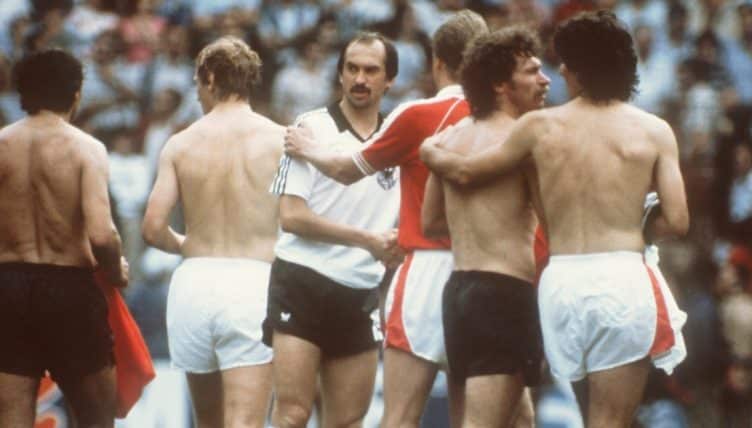 Instead, FIFA made some alterations to the World Cup tournament rulebook whereby the last games in every group from the next competition (1986) onwards would be played at exactly the same time so that the shame or Gijon could never be repeated.

Algeria’s Lakhdar Belloumi felt that outcome was more significant than their heartbreak in Spain. “Our performances forced FIFA to make that change, and that was even better than a victory,” Belloumi said. “It meant that Algeria left an indelible mark on football history.”

West Germany, meanwhile, managed to shoulder the mountain of ill-wishes and absorb the loathing aimed in their direction and they carved out a route to the 1982 World Cup Final in Madrid.

However, poetic justice was served up by a rampant Italy outfit at the Santiago Bernabéu where the Italians conquered West Germany in a 3-1 win thanks to second-half strikes from Paolo Rossi, Marco Tardelli and Alessandro Altobelli.

The loss and subsequent sorrow it spawned seemed like a fitting punishment for the architects of the “Nichtangriffspakt von Gijón” or the “Non-aggression pact of Gijón just weeks before.

Two years later, West Germany were among the favourites to successfully defend their European Championship crown at Euro 1984 in France under the unabashed Jupp Derwall, however, they failed miserably and exited the tournament in the first round.

Public opinion of Derwall soured following West Germany’s surprise exit to the point that he would be heckled when seen on the German streets and the Head Coach was axed shortly after – a decision is likely to have drawn a smirk or two in Algeria.