In the pantheon of great World Cup upsets, Cameroon’s triumph over defending champions Argentina at Italia 90 perhaps stands unopposed as the tournament’s most compelling and miraculous event.

Inside the space of 90 minutes at a sun-baked San Siro Stadium in Milan, Cameroon dragged African football to new territory filled with positive perception and widespread admiration. 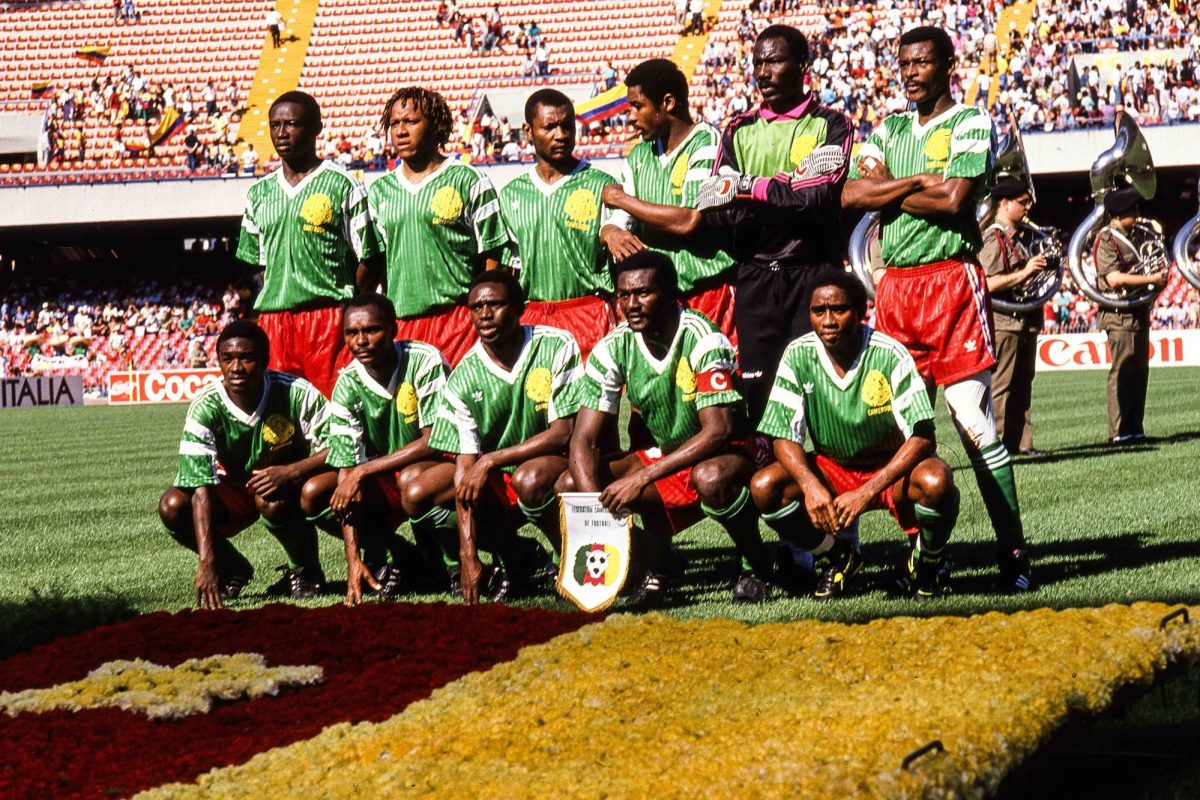 François Omam-Biyik rose so high to plant his header past Nery Pumpido in the 67th minute that it appeared he was being beamed aboard a mothership on an earth-wide jaunt to collect human beings capable of producing astonishing physical feats. Indeed, the thought of an African team toppling defending world champions Argentina had been a truly alien idea before the 24-year-old’s intervention.

Cameroon’s 1-0 victory on June 8th 1990 would spark an African World Cup adventure like no other, where an entire continent was rallied and a generation inspired, while a certain veteran striker’s iconic celebration would later spawn a million imitations. But to really appreciate the breadth of Cameroon’s achievements, we have to take the tale back to its origins.

Messy preparations and a retiree’s return

When Argentina were drawn in the same World Cup group as Cameroon in the December before the tournament, the nation’s manager, Carlos Bilardo, said: “the Soviet Union is a tough opponent, but I’m generally pleased. Our group is not the easiest but we should have no problems in qualifying for the second round.”

Both Romania and Cameroon, in particular, it seemed, weren’t even deemed worthy of a namecheck and to be fair to Bilardo, his opinion was informed by some pretty compelling evidence. To put it bluntly, Cameroon were a mess.

Widely quoted as long as 500/1 to win the tournament, Cameroon were the very definition of an afterthought. They were outsiders so short of the required standard that they barely merited being mentioned at all.

In 1988, two years before Italia 90, a no-mark Russian coach, Valeri Nepomniachi, was sent to Cameroon at the behest of the football federation in his homeland, who answered the call for help from the African country’s president, Paul Biya.

Nepoamniachi, whose only experience of first-team management at that juncture had been a single campaign with a third-tier outfit in Russia, didn’t speak a word of French, while his command of English was monosyllabic at best and his tenure was almost cut short after Cameroon’s dismal performances at the Africa Cup of Nations just a couple of months before the World Cup was due to start.

Cameroon were defending their crown in Algeria, however, they exited the competition at the Group Stage following two defeats in three games.

After that disastrous display and with optimism eroded, under-fire Cameroon manager Nepoamniachi looked completely out of his depth, though a hail Mary call to one of the nation’s former stars proved the most inspired of moves.

Roger Milla was 38 and had been retired from international football for three years when he agreed to return to the fold. Milla, who was playing for a team called Saint-Pierroise in Réunion in the middle of the Indian Ocean responded to Nepoamniachi's desperate invite at once, saying that he was “always ready to be called to my country’s colours”.

Milla, who was a member of Cameroon’s party at World Cup 1982 in Spain and African footballer of the year in 1976, was back in the fold, but with arguments between the current squad and officials over unpaid bonuses, sketchy training camps and poor warm-up results, preparations for the tournament in Italy were borderline catastrophic.

Milan and match day one

In the build-up to Cameroon’s opening World Cup fixture against Argentina at San Siro on June 8th, preparations took another sour turn when first-choice goalkeeper Joseph-Antoine Bell unleashed a volley of criticism at his teammates in a newspaper interview, saying that they had “no chance of coping with Argentina” and that Cameroon would “go out in the first round without much glory.”

As one of the team’s most established players, Bell’s words stung and Nepomniachi had little choice but to drop him for Cameroon’s fixture against Argentina, replacing the stopper with back-up option Thomas N'Kono – a goalie who was so convinced his role at the World Cup would be peripheral that he told his wife to go shopping on the day of the Argentina game instead of tuning in.

N’Kono was a reluctant replacement, though he was eventually persuaded to take the gloves. His subsequent displays between the sticks at the 1990 World Cup were so impressive that an Italian kid from Tuscany was motivated to trade midfield for goalkeeping.  “It was N’Kono and his spectacular saves that made me fall in love with the position. He became my hero”, said a certain Gianluigi Buffon many years later.

With accidental hero N’Kono a nervous-looking netminder, returning veteran Roger Milla on the substitute’s bench and a team of journeymen assembled from the French lower divisions, Cameroon entered the fray against an Argentinean outfit heavily dusted with stars from domestic leagues in Italy, Spain and France, and captained by Diego Maradona.

Observers and supporters alike expected Cameroon to be lambs to the slaughter against mighty Argentina, however, a thunderous performance powered by studs, sweat and skill allowed the Indomitable Lions to tear chunks out of the South American’s reputation.

To say Cameroon took a heavy-handed approach with Argentina would be putting it lightly – they had two men sent off at San Siro with Benjamin Massing’s late dismissal for an outright assault on Claudio Caniggia especially brutal – however, to pin their success on brawn alone would be a wholly unkind appraisal.

François Omam-Biyik rose highest to send a downward header past the weak-wristed Nery Pumpido for the match-winner shortly after the hour mark. Argentina were so shell-shocked that they couldn’t muster a response, they became positionally ragged and tactically undisciplined as they searched in vain for an equalizer first against ten men, then against nine.

The emphatic Cameroonian celebrations on the pitch and in the stands at full-time offered confirmation that we were bearing witness to something special, though the Indomitable Lions were only getting started.

Roger Milla saw just nine minutes of action off the bench in Milan as Nepomniachi called on his experience to help see out the game, though the 38-year-old was about to take centre stage.

Romania, qualification and salsa in the corner

In the immediate aftermath of Cameroon’s win over Argentina, goal-scoring hero François Omam-Biyik spoke with passion about the performance, saying: “No one thought we could do anything here against Maradona, but we knew what we could do. We hate it when European reporters ask us if we eat monkeys and have a witch doctor. We are real football players and we proved this tonight.”

His patter might have been different had he been interviewed before kick-off, however, his words helped to punctuate the massive swing in perception that Cameroon were experiencing. Instead of being the butt of jokes, they had become everyone’s favourite underdogs and back home, the team carried the hopes – and now expectations – of over 20 million people from Yaoundé to Douala.

Six days after their feat against Argentina, Cameroon lined up against a dangerous Romanian side at the Stadio San Nicola, Bari on Matchday Two in Group B.  Jules Onana and Emmanuel Maboang were drafted into the XI to replace the suspended pair André Kana-Biyik and Benjamin Massing, though there was still no place for Roger Milla.

In another rough-and-tumble contest, margins were wafer-thin against Romania before Milla was introduced to replace Emmanuel Maboang just before the hour mark, and less than 20 minutes after his arrival, the striker was celebrating.

Winning a high punt aimed loosely in his direction, Milla brought the ball down on his chest and swept the ball past Romania keeper and skipper Silviu Lung with his left foot. The iconic forward made a dash for the corner flag, placed one hand on his midriff, thrust another skyward and skittered blissfully in celebration.

Milla was at it again just ten minutes later when he cannoned a second goal home from an unfavourable angle into the roof of the net. His exceptional brace earned Cameroon their second triumph in as many games and booked their place in the knockout phase of the World Cup for the first time ever – a feat they haven't managed to repeat since.

“I’m a big Salsa fan” answered Milla when quizzed about his celebratory steps afterward and the old-timer would remember to bring his dancing shoes to the Round of 16.

Despite his extraordinary impact off the bench against Romania, Roger Milla was again kept in reserve by Valeri Nepomniachi in the Round of 16 against Colombia as the Russian taskmaster again plumped for energy over experience.

However, with 54 minutes on the clock and the tie deadlocked at 0-0, Nepomniachi unleashed his veteran headliner, though Milla was unable to make his presence count in normal time.

With the game veering towards the lottery of penalty kicks, Milla found space on the turn between a couple of Colombian defenders and clipped the ball expertly over the advancing René Higuita to give Cameroon the advantage. Just 120 seconds after Milla was salsa dancing for the first time, the striker robbed Higuita inside the Colombian half and with the stopper in no-man’s land, Milla rolled the ball into an empty net and was back gyrating in front of his adoring army of followers.

Cameroon conceded late but held on to secure passage to the quarter-final where Bobby Robson’s England lay in waiting at the Stadio San Paolo in Naples. By July 1st, everyone knew who Cameroon and Roger Milla were, including the Three Lions, who played with the air of a team feeling the jitters against a tidal wave of African momentum and a set of Cameroonian players brimming with confidence.

David Platt’s early strike settled some of England’s nerves, but Cameroon rallied, equalized and then took the lead through Eugène Ekéké after 65 minutes. They almost made it three but missed a guilt-edged chance when clean through. England eventually made them pay for their profligacy, though they needed two Gary Lineker spot kicks to win the day.

Cameroon’s valiant exploits in Italy had come to an end at the quarter-finals, though the mark they made on the tournament and indeed on football itself was ever-lasting.

The homecoming and the aftermath

Cameroon’s battle-weary heroes were greeted by a fittingly euphoric welcome upon their return. Their plane even had to pull up and come round again to land when the runway at Douala airport after a surge of well-wishers flooded the no-go zone.

The subsequent victory parade lasted two full days and President Biya bestowed honours on everyone involved, with players, coaches, staff and even newspaper hacks all included in the fanfare.

For the dancing Roger Milla, special veneration was reserved and at 38, the Bronze Boot winner at the 1990 World Cup made the tournament’s FIFA World Cup All-Star Team XI. Milla was also named African Football of the Year for 1990 and in 2007, the Confederation of African Football declared him the best player from the continent from the previous 50 years.