In 1970, Brazil conquered the world with a team so fantastic that each flutter of O Canarinho’s (the Little Canary) wings blew a hurricane of inspiration through streets and cities from Mexico City to Rio de Janeiro, Dublin to Dakar and back again, tattooing memories everywhere with ever-lasting moments of magic.

Tracking their maneuvers was a recipe for motion sickness. Between blinks, they could switch from a walking pace to a tempo so swift that they became apparitions of sunburst yellow hiding in your peripheral vision.

Defending against them was like trying to empty a sinking boat with a hula-hoop, like trying to write your initials on mist, like trying to decipher an underwater whisper shared between two shy seals…..you get the picture. They were good, so good in fact, that they might just be the best team ever assembled.

Every superhero has a compelling origin story and football’s equivalent of the Avengers, of course, has its own. In 1958 and 1962, Brazil were world champions, first in Sweden with Garrincha, Dalma Santos, Vava and Pele and then in Chile four years later with largely the same set of stars.

However, in World Cup 1966 in England, Brazil blew it under Head coach Vicente Feola and with Pele carrying injuries, Garrincha aging, Djalma Santos embarking on his swansong, and captain Bellini approaching 40, they exited at the competition’s group stage.

After the disaster of ’66, Pele, who was kicked from pillar to post during the tournament, was so bruised by the experience that he decided to retire from the international scene, though he would reverse that decision shortly after. 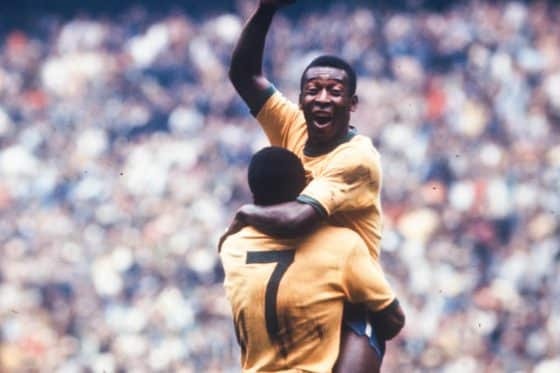 Even so, Pele’s return wasn’t enough to smooth the stormy waters and Brazil went through six different managers between the summer of 1966 and 1969. When controversial and outspoken Joao Saldanha was finally ousted before the qualification phase for the 1970 World Cup in Mexico began, the outlook for the Seleção was despairingly bleak.

However, a managerial masterstroke would spark a rapid reverse in fortunes. Regeneration and new ideas were required and Brazil turned to Botafogo boss, Mário Zagallo for help.

Zagallo was a World Cup winner as a player with Brazil in 1958 and 1962 and at just 38, he was young still young and relevant enough to relate to the country’s stars.

It didn’t take Zagallo long to work out how to reverse his predecessor, Joao Saldanha’s mistakes. Brazil were unable to cope with the physicality of the 1966 World Cup in England and Saldanha’s blueprint was constructed around ways to make the Brazilians a more combative force.

However, Zagallo’s philosophy was a complete rewrite and instead he switched focus back to the cornerstones of Brazilian football – skill, style, swagger and panache.

“What this team needs are great players, players who are intelligent”, Zagallo said when sharing his ideas. “Let’s go with that and see where it takes us.”

Qualification for 1970 secured in style

With their shackles removed, a Brazil team infused with a new sense of freedom breezed through the CONMEBOL World Cup qualification stage in 1970, galloping to top spot in Group 2 ahead of Paraguay, Colombia and Venezuela thanks to a perfect six wins from six.

Tostao and Pele shone brightest, netting 16 of Brazil's 23 goals between them, though the rise to prominence of free spirits like Clodoaldo, Rivellino and Jairzinho added new tantalizing dimensions to the team's football. 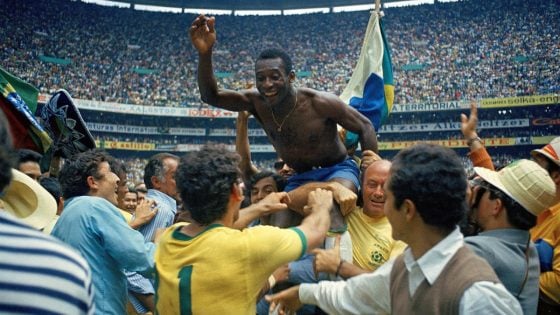 This was an era way before football became the game of numbers, inches and percentages it is today. Instead of robotically-drilled super athletes performing computer-generated patterns written by analytics experts and sports data scientists, you had a free-wheeling purity. An assemblage of players dripping with unbridled genius and instinctive individuality.

Zagallo’s Brazil were taking form. They were becoming the water seeping through every crack and crevice and they were about to burst through the damn in Mexico.

On to Mexico and the World Cup Group Stage

Over 50,000 people swarmed through the gates at the Estadio Jalisco in Guadalajara to watch Brazil’s first match at World Cup 1970 on June 3rd and the South Americans put on a show for those in attendance in their Group 3 opener against Czechoslovakia.

Brazil actually slipped behind to an early Ladislav Petráš effort, though they roared back to equalize through Rivellino before the break and after the interval, a goal from Pele and a brace from Jairzinho allowed O Canarinho to stamp their authority on proceedings.

Brazil’s dominance was such that Pele attempted an audacious lob from the halfway line in the second half and though his effort to beat Ivo Viktor from distance narrowly missed, the vision and courage he showed to take the chance was a sign of the confidence flowing through Brazilian veins. 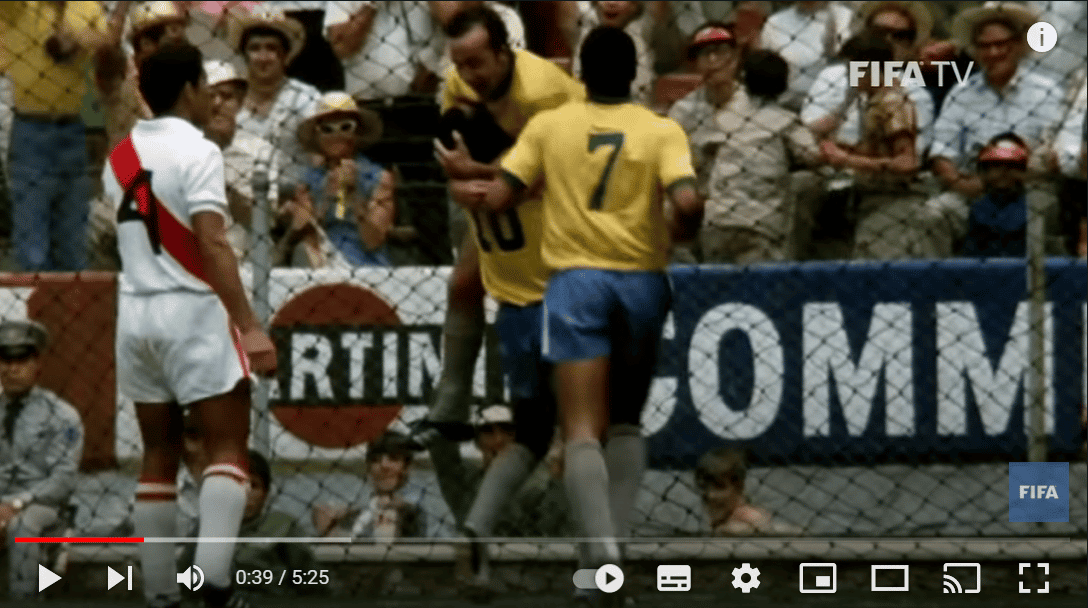 Three days later, Brazil played in Guadalajara again, this time against reigning champions England in what was an acid test of their aspirations. Brazil won 1-0 thanks to a hit from Jairzinho after the interval, though the margin of victory should have been more comfortable. England keeper Gordan Banks produced THAT iconic save from a downward Pele header, while captain Bobby Moore made a series of expertly-timed tackles as the last man. Eventually, England cracked under the relentless Brazilian pressure when Pele played Jairzinho in for the winner.

Already through to the next phase, Brazil maintained their momentum on matchday three with a 3-2 triumph over Romania on June 10th, with Pele netting twice and Jairzinho prolonging his goal-a-game streak.

Passage to the quarter-finals was booked in some style and Zagallo’s Brazilian juggernaut was about to pick up speed.

Brazil remained at the Estadio Jalisco in Guadalajara for the World Cup quarter-finals where an assignment against Peru on June 14th was expected to be routine.

The Seleção made light of those expectations and played without apprehension against the Peruvians to the rhythm of the samba drums in the crowd. Rivellino put them in front with a sumptuous first-time left foot cannon in the 11th minute before Tostao doubled their advantage just four minutes later.

The 23-year-old Cruzeiro forward added another just after the break, before Jairzinho put the icing on the cake from an acute angle late on. Peru notched two consolation efforts, but never really threatened to mount a genuine challenge and Brazil were one step closer to glory.

On June 17, Brazil returned to the Estadio Jalisco to face Uruguay – the team that had upset the script in 1950 when they beat the hosting Brazilians in the World Cup final at the Maracanã in Rio de Janeiro.

However, revenge wasn’t on the agenda, at least for this generation of players. Words like vengeance weren’t part of the Joga Bonito (The Beautiful Game) vocabulary and Zagallo’s Brazil just wanted to play.

The Uruguayans would provide stiff opposition for a time in the semi-finals, however. They were well-drilled defensively and had tasked man-markers with sticking touch tight to Brazil’s main creators, Pele and Gerson.

Brazil slipped behind after 19 minutes when Luis Cubilla stole in, though a piercing move down the left allowed Clodoaldo to level the game up with a brilliant finish on the cusp of the interval.

That equalizer provided a powerful swing in momentum and in the second half, Brazil were in the ascendancy throughout. Jairzinho finished off another devastating team move through the middle before Rivellino added the cherry on top just before full time.

The semi-final was also made famous by an incredible iconic dummy when Pele bamboozled Uruguay keeper Ladislao Mazurkiewicz by stepping over a pass. The Brazilian collected the ball on the other side of the confused stopper but couldn’t convert it into an empty net, denying the World Cup one of its most spectacular goals.

Brazil would taste the atmosphere of a new arena for the first time in the 1970 World Cup when they lined up against Italy in the competition’s final at the Estadio Azteca in Mexico City.

Over 100,000 expectant supporters filled every available space at the grand sporting cathedral which was located just beyond the urban sprawl in the borough of Tlalpan.

Billed as a clash between futebol arte (football art) and futebol de resultado (football for the result), the final was a skirmish between two hugely contrasting ideologies. It was Brazil’s free-spirited fluidity against the architects of the defensive Catenaccio style, though the majority of those in attendance longed for a Brazilian victory.

It took Brazil just 18 minutes to break the Italians down. Rivellino looped a cross to the far post where Pele rose highest to bullet a header past Enrico Albertosi to net Brazil’s 100th goal at World Cup tournaments.

That deadlock breaker should have set the tone, though an ill-conceived Clodoaldo backheel deep inside his own half was picked off in the 37th minute, allowing Roberto Boninsegna to square things up against the run of play.

Keen to nip any Italian renaissance in the bud, Brazil exploded out of the blocks in the second half. Pele missed a guilt-edged opportunity to restore their lead before Rivellino landed a rocket from distance against the bar, however, Gerson powered in a beauty from range with his left foot after 65 minutes to spark rapturous celebrations.

Six minutes later it was three when a delicious raking pass from Gerson found Pele, who nodded the ball into the path of the advancing Jairzinho. The prolific forward bundled the ball over the line and spun away with both arms aloft. He had set a new record with his awkward finish, becoming the only player ever to net in every single round at a World Cup finals.

With the safety of a two-goal buffer putting the Brazilians at ease, they began to dance and with two minutes on the clock, they weaved one of the most beautiful goals football has ever produced.

Containing nine passes, several body swerves, a layoff played with otherworldly vision and a first-time Exocet missile of a finish –  it was a sequence so dazzling that it is still considered the best goal ever scored in the World Cup.

Clodoaldo, Gerson and Jairzinho were all involved in the slick build-up. It was exhibition stuff and they combined to feed Pele just outside the Italian box where Brazil's famous number 10 was waiting to play a pass to his right with all the casual sway of a father playing back garden ball with his infant son. Rampaging fullback Carlos Alberto was galloping forward to meet it and the 25-year-old unleashed a shot with such ferocity that it nearly took the Italian net off.

4-1, game done and Brazil were World Cup champions for the third time.

Pele’s assist was his sixth of the tournament – a haul that remains a record tally for a single World Cup tournament. Manager Mário Zagallo became the first man to win the trophy as a player and then as a coach and his team was the first since the 1930s to win all of their World Cup matches en route to lifting the trophy – six games six wins during qualification and six games six wins at the tournament proper.

Brazil scored a meaty 3.2 goals per game in Mexico – an average only bested by Hungary in 1982, whose numbers were padded significantly by a bizarre 10-1 triumph over El Salvador.

Pele retired from international football in 1971, realising that the only way was down after his and Brazil’s era-defining performances in Mexico a year before. To this day, Zagallo’s Canarinho remain enshrined in World Cup and footballing mythology as arguably the greatest team to have played the game.