In a football sense, the 1990s was home to baggy shirts, up-turned collars, and all-round out-their kit designs. It was also home to two World Cups, one in the US, and one in France, both of which provided no shortage of thrills and spills.

The 1998 World Cup in particular was one that was jam-packed with drama and memorable moments.

Brazilian Ronaldo, at 21 years of age, well and truly announced himself on the world stage by scoring four goals en route to the final, elegant Dutchman Dennis Bergkamp scored a goal that was both beautiful and audacious, 17-year-old Michael Owen burst onto the scene, scoring a superb goal against Argentina, David Beckham famously kicked out at Diego Simeone, resulting in a red card for England’s poster boy, and Frenchman Zinedine Zidane dazzled as he lead his country to glory on home soil.

France 98 was also memorable for another reason. The Blanco Bunny Hop. Fans not old enough to remember that tournament are thinking “What the *%!$ is that?”. For those who remember, it’s an iconic moment, one that is now synonymous with everything that is wonderful about international football’s premier competition. 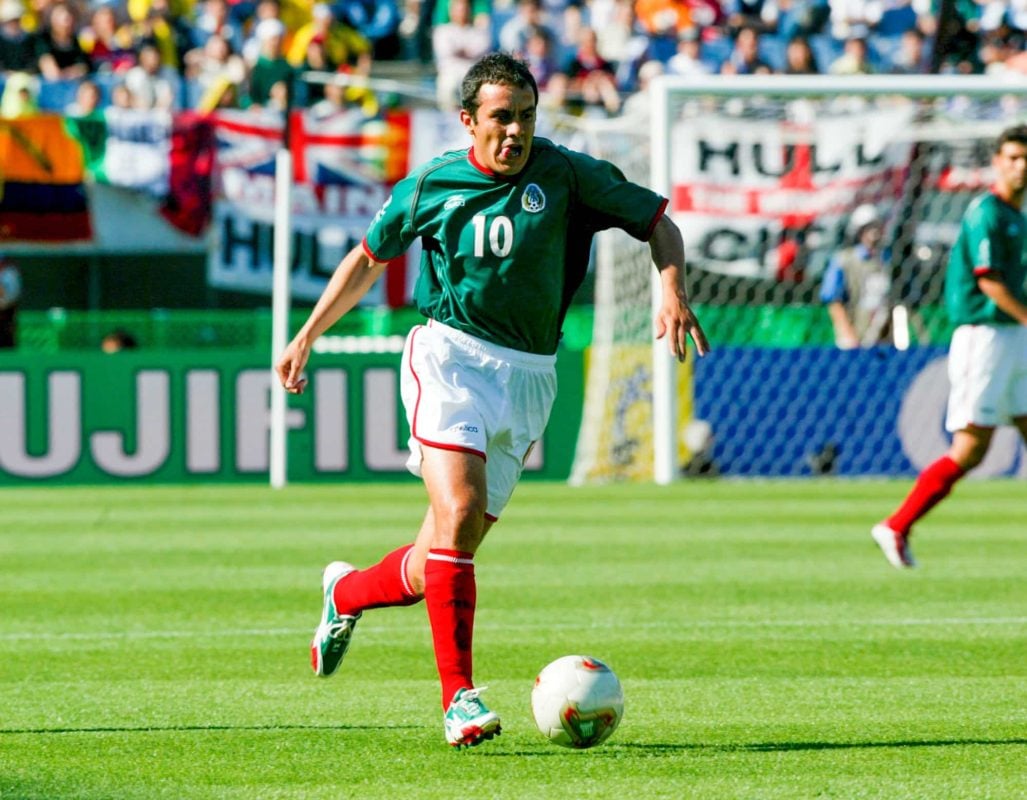 First off, a little background on the player that treated millions of viewers around the world to a memorable piece of footballing imagination.

A combative and high-intensity player, Cuauhtémoc Blanco spent most of his career playing in his native Mexico, stepping into European club football for a brief period between 2000 and 2002, when he played 23 times on loan for Spanish outfit Real Valladolid.

Apart from that short stint in northern Spain, and two seasons in Major League Soccer with the Chicago Fire, the Mexican played only in his own country, serving as an important figure for clubs such as América, Veracruz, Dorados and Irapuato.

Despite playing mainly in his homeland, Blanco is now known by football fans around the globe, but prior to the 1998 World Cup, the attacking midfielder wasn’t really known outside of Mexico, and at that time, had only been representing his country at international level for a couple of years.

On match-day one at the World Cup in 1998, the Mexicans were up against South Korea at Lyon’s Stade de Gerland.

Fancied to do well, the men in green and white initially found life against their Asian opponents tough. Try as they might, they weren’t able to break through. After 28 minutes, when Ha Seok-ju’s free-kick was deflected in, they found themselves a goal down, though the tide would quickly turn when the goal scorer made a reckless challenge only a minute later. A red card was brandished and the Mexicans had the advantage. It took until the 51st minute for the team known as El Tri to get themselves back in the game. Substitute Ricardo Peláez levelled the scoring, and from there on, they were not to be stopped. Luis Hernández put his team in front in minute 74, before putting the victory beyond any doubt when scoring again ten minutes later.

That first game was memorable for the comeback, but the most memorable thing about the game and about Mexico at France 98, in general, was Blanco’s “Bunny Hop”.

With the score at 1-1, and with his team building momentum, Blanco’s flair came out to play when he found himself in possession high up the pitch on the left-hand side. Closing in were two South Korean defenders, and it seemed that Blanco’s options were narrowing, and fast. Seemingly in a tricky position, where it looked as though dispossession was likely, the silky Mexican, clutched the ball between both feet and audaciously jumped between the two oncoming defenders, leaving them in his wake. And if that wasn’t enough, he performed the same skill moments later, achieving the same success.

“The Bunny Hop” was certainly not a one-off, and would in fact turn out to be something of a go-to move for Blanco, a showpiece that he would bring out at regular intervals over the years that followed the World Cup in France. The move, in general, has been copied several times over the years, with a string of players following the Mexican’s lead.

As is the case for many players who impress when playing at the World Cup, it was thought that Blanco may be one of several players uncovered to the wider footballing audience to move to Europe, and in 2002, get a move he did. Though, as touched on above, his move, a loan to Real Valladolid in Spain, was short-lived, as he only made 23 appearances for the La Liga club.

During his career, Blanco enjoyed many fruitful spells in his native Mexico, most notably scoring 108 times in 308 appearances for giants América. The man who played with both aggressiveness and style also became a fan favourite among the Chicago Fire faithful. During two seasons in Major League Soccer, Blanco made 62 appearances, scoring 16 goals, one of which was voted for as Goal of the Year.

Known for his thunderous strikes and improbable finishes, Blanco made a name for himself as a deadly penalty taker during his career. Blanco found the net 71 times from the penalty spot, missing on just two occasions.

Blanco on the biggest stage

Thought of by many in his native Mexico as the most influential player in the country’s history, Blanco played in three separate FIFA World Cups.

In 1998, aside from his bunny-hopping antics against the South Koreans, the bulky and powerful attack-minded midfielder featured as one of Mexico’s main players. On match-day two he scored in a 2-2 draw against Belgium. Despite going through the group stages unbeaten and having seemingly built a sturdy base from which to build, Mexico fell at the first knockout hurdle, losing by two goals to one against the Germans, who came from behind to break Mexican hearts with an 86th-minute goal.

After being instrumental in qualifying, scoring four goals to take his country to the 2002 World Cup, Blanco once again impressed at the tournament itself. He scored the only goal of the match to give Mexico an important opening-game win over Croatia, which paved the way for El Tri to reach the knockouts. Unfortunately, they once again fell short, losing by two goals to nil against the USA.

In 2006, much to the surprise and annoyance of the El Tri faithful, Mexican coach Ricardo Lavolpe made the controversial decision to leave Blanco out of the final squad, later citing his lack of physical fitness as one of the reasons for leaving him out.

Four years later and one of Mexico’s best ever was back playing for his country on the biggest stage. In 2010, Blanco captained the side on South African shores, where he not only served as a leader , but a goal scorer in one of Mexico’s greatest ever results. At the Peter Mokaba Stadium in Polokwane, the Mexicans seemed to have a tough task on their hands. They were up against the French, though Blanco and Co. were not fazed, as they stunned their opponents, emerging victorious thanks to goals from Javier Hernandez and Blanco, who as he almost always did, notched coolly from the spot in the 79th minute.

Remembered for many things, least of all his ability to entertain the crowd by showing no lack of imagination and scoring wondrous goals, Cuauhtémoc Blanco will forever be synonymous with the World Cup thanks to his “Bunny Hop” all those years ago.