With some of the best talent in world football to call upon in the form of Franz Beckenbauer, Sepp Maier and Gerd Muller, a player who even today is considered as one of the greatest strikers of all time, West Germany would have been highly fancied to do well at the 1974 World Cup, even if they weren’t the host nation.

The tenth renewal of FIFA’s showpiece event was of course held in West Germany, and that meant that the pressure was on.

If there was one country that could make light work of handling the pressure then it was probably West Germany. Handle the pressure they did, getting the job done in a typically organised fashion, beating some more than useful outfits on their way to setting up a final against the total football of Holland’s golden generation.

While the West Germans had the astuteness of Beckenbauer and the no-nonsense finishing of Gerd Muller, the Dutch had the brilliance of Neeskens and the genius of Cruyff. 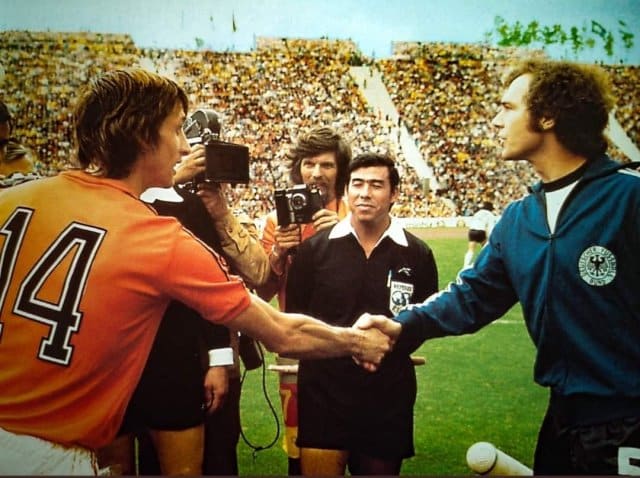 At that time, West Germany did things efficiently, by adopting a somewhat pragmatic and organised style. In complete contrast, the Netherlands went about changing the game by playing what they themselves called “Totaalvoetbal”, which translates as total football. Their never before seen all-action style of play, where every player seemed to take up a variety of positions during the game, left fans both amazed and thrilled in equal measure.

Two vastly different giants of the game locked horns in a match for the ages, and despite what many people expected, it was the West Germans who emerged victorious.

When Johan Neeskens’ converted from the penalty spot after just two minutes, scoring his fifth goal of the tournament, the Dutch looked on course to carry on dominating with their newfound approach, but the West Germans were having none of it, and after 25 minutes of the first period, had drawn level through Paul Breitner, who is still one of only four players to score in two separate World Cup Finals.

By halftime, the West Germans had completed the turnaround thanks to a 43rd minute goal from the everpresent Gerd Müller. Tasked with the job of suppressing Holland’s creativity, with Franz Beckenbauer leading from the back, the tournament hosts held firm like only they could, fighting hard for their win on home soil.

Much of West Germany’s success in 1974 was built on defensive solidity. They were focussed and disciplined. They were also tactically astute. Everybody knew their job, and crucially, every player did their job.

Ahead of the 1974 World Cup, everybody knew that the West Germans would be a nightmare to face. Right at the very heart of that nightmare was Franz Beckenbauer, a clever, calculated defender, who orchestrated the entire game from his position in the centre of defence.

Playing in his third World Cup, Beckenbauer went into the tournament as a player not only blessed with height and natural physical ability, unrivaled defensive acumen, as well as an eye for killer passes, but at 29-years-old, he was a player who had experience on his side. That experience proved invaluable as the West Germans navigated their way through an initial group containing Chile, Australia and East Germany. 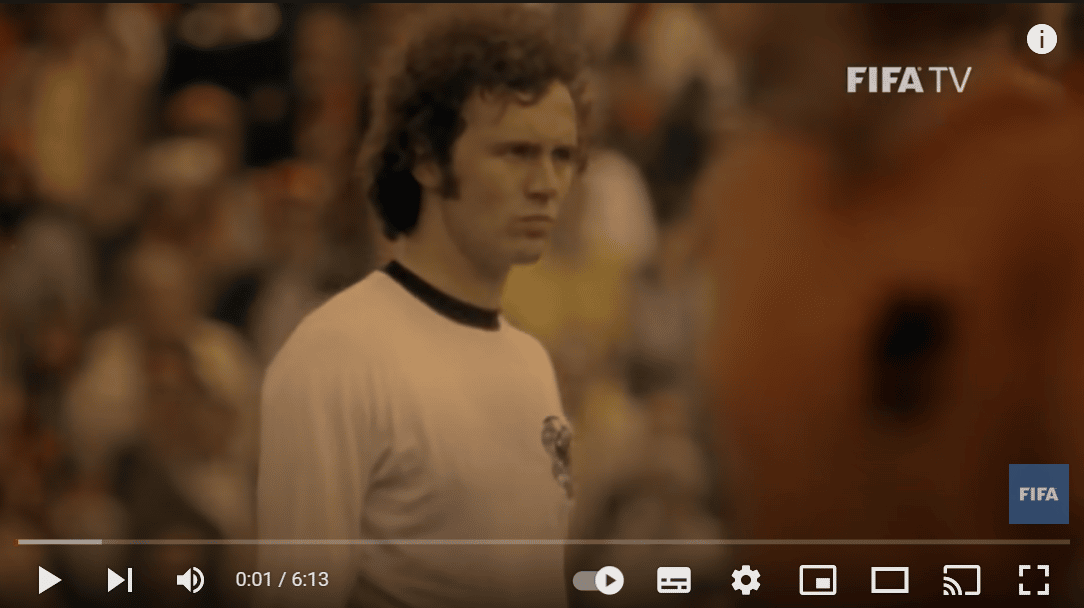 The 1974 World Cup featured a second group phase, during which West Germany shifted through the gears, beating Yugoslavia, Sweden and Poland, keeping two clean sheets and scoring seven goals in the process. They had built on the solid foundations laid during the first set of group games and had now added a cutting edge.

When it came to the final, Beckenbauer was perhaps the catalyst for West German success. The way in which the West German captain organised his defence in a way that simply stopped the Dutch from deploying their unusual style to full effect remains impressive to this day.

So much more than just a defender, Beckenbauer very nearly chipped in with a goal, when in a typically elegant fashion, he attempted to deceive the Dutch with a deft chip from a free kick.

Few defenders could’ve stayed so calm and focussed on the task at hand when faced with the prospect of keeping the likes of Johan Cruyff quiet. Even fewer could have done it as effortlessly. In fact, few players in the history of the game, if any, have combined such sturdiness and hard-to-beat attitude with great style and elegance. In that sense, Beckenbauer was a true pioneer.

Four years before their glory on home soil, the West Germans were one of the more likely winners of the 1970 World Cup held in Mexico.

With Beckenbauer at the heart of the team, West Germany cruised through the group, winning three from three, scoring ten goals and conceding four in the process.

In the quarter-finals, it was the imperious leader who staged a comeback for his team after they went two goals down to England. Uwe Seeler forced extra time and then goal-scorer extraordinaire Gerd Müller sent the English packing.

The West Germans were then drawn against the Italians in the semi-final, and what followed at the Estadio Azteca in Mexico City was one of the greatest World Cup clashes of all time.

An early Italian goal from Roberto Boninsegna looked to be enough for Italy, who headed into stoppage time with a 1-0 lead, but up popped an unlikely scorer in Karl-Heinz Schellinger, who notched a 92nd-minute equaliser to save West German blushes.

What followed was perhaps the most enthralling extra-time period that the World Cup has ever seen. Müller scored to put West Germany in front after 94 minutes, but it took Italy just four minutes to respond through Tarcisio Burgnich. The tide turned once more, as Luigi Riva then scored after 104 minutes to give the Italians a 3-2 lead before Müller scored his tenth of the tournament. Just one minute later, a 17-minute flurry of goals was completed by Italy’s Giovanni Rivera, who scored the winner, ending hopes of a first West German victory outside of Europe. 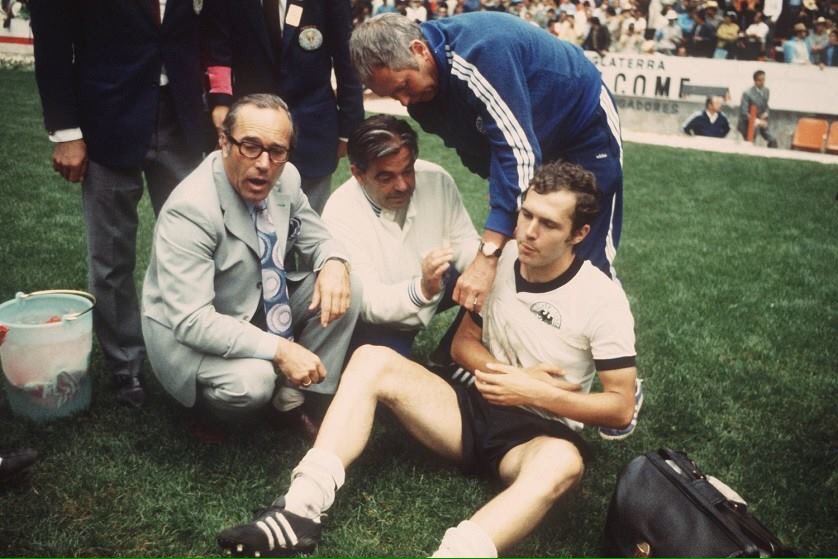 Aside from the high-intensity nature of the seven-goal thriller, that semi-final will always be remembered for an injury sustained by Beckenbauer. Der Kaiser was fouled and dislocated his shoulder, but such was his dedication to the cause that he continued playing, seeing out the contest despite having to wear a sling. The great West German captain patrolling in defence with his arm heavily strapped remains a famous image.

Many people felt, especially in West Germany, after being forced to play on with his arm in a sling during the 1970 semi-final loss to Italy, that the great captain got what he deserved when he stood strong to deny the Dutch and lift the trophy in 1974.

A career of highlights

At the time of his retirement in 1983, Franz Beckenbauer had become one of the most decorated players of all time.

During his 18-year spell at Bayern Munich, where he began as a 14-year-old, Beckenbauer, who earned the nickname Der Kaiser, which means “The Emperor” in English, scored 60 goals in 427 appearances. Such a return is almost unheard of for a defender, showing that this giant of the game was so much more than a centre-back.

Having spent the greater portion of his club career playing for Bayern, Beckenbauer joined the New York Cosmos in 1977, following the path of previous great Pele. Whilst in New York, he played 80 times, scoring 17 goals, before returning to Germany to play for Hamburger SC between 1980 and 1982. In 1983, Der Kaiser had one final stint in America, once again linking up with the New York Cosmos, for whom he played a final 25 games.

Not many defenders bow out after scoring 79 goals in 560 appearances. Even less say goodbye to their playing days having won six Bundesliga titles with two different clubs, not to mention four DFB Pokals, three European Cups, and one European Cup Winners’ Cup.

Even more astonishing, Franz Beckenbauer was the first defender to ever win the coveted Ballon d’Or trophy, which is presented to the best player in the world each season. The German legend got his hands on that individual prize in both 1972 and 1976.

On the international stage, Beckenbauer won both the World Cup in 1974 and the European Championships in 1972. He played no fewer than 103 times for his nation, scoring 14 goals.

More than a player 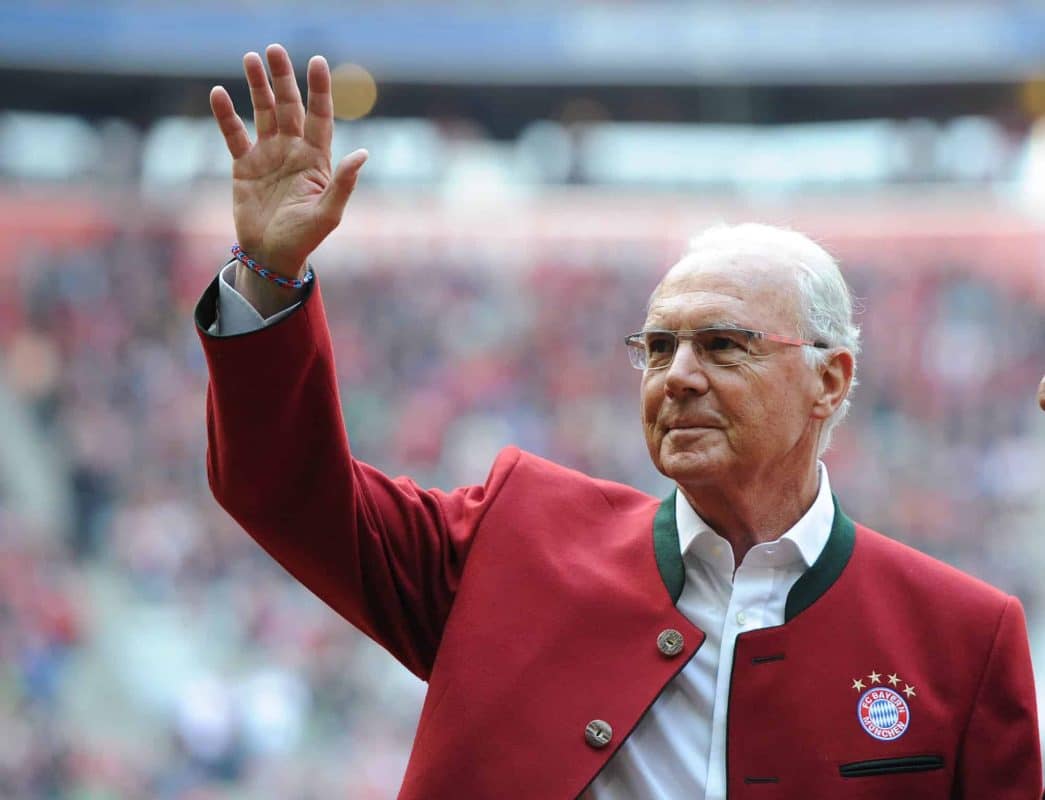 What makes Franz Beckenbaeur even more revered is the fact that he went on to have great success as a manager too.

For six years between 1984 and 1990, Der Kaiser managed West Germany, leading them to glory at the 1990 World Cup. He also had a spell in charge of Marseille in France, winning Ligue 1 in 1991, before returning to his beloved Bayern Munich, where as manager he lifted the Bundesliga trophy in 1994, before finding continental glory in 1996, winning the UEFA Cup.

Franz Beckenbauer is also one of only three men to win the FIFA World Cup as both a player and a manager. He was the second man to do so after Mario Zagallo took charge of Brazil’s 1970 triumph, following his wins as a player in 1958 and 1962. Didier Deschamps has since joined the illustrious and very short list, lifting the trophy as a player in 1998 and as a manager in 2018. True to form, Beckenbauer achieved things that the overwhelming majority of players and managers did not.