For those who have never heard the name ‘Garrincha’ before, let us quickly introduce this Brazilian superstar to you. Manuel Francisco dos Santos, as he was born, was a Brazilian midfielder who played on the right wing for his country. He was born in Rio de Janeiro state in 1933, and from birth, the legend of Garrincha and the crooked legs was already established. We say this because Garrincha was born with several physical defects. So one would have thought that his chances of becoming a superstar in the world of football were slim to none.

As for what these physical defects were, there is a fairly chunky list. He was born with a spine that wasn’t straight for one, which doctors feared would impact his ability to even walk normally. Adding to that, his two legs were not the same length – the right leg was reportedly 6cm shorter than the left. This, coupled with the first ailment made doctors even more afraid of the development of Garrincha, especially as he got into adulthood. Yet the list of defects wasn’t done there. 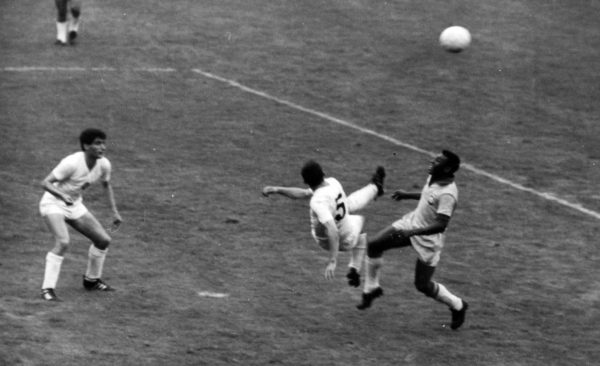 He also had knees that were described as ‘warped’ by medical professionals. But despite these deformities, Garrincha did start playing for local clubs as a boy and his talent did not go unnoticed by Brazilian scouts. As for the nickname of Garrincha given to him by his younger sister, he earned another nickname once he established himself on the professional stage – the ‘Bent-legged Angel’.

Of course, there is slightly more to the legend of Garrincha than just this quick overview. And for that reason, we’d like to dive deep into the life of Garrincha, his career from a World Cup standpoint, and most famously, how he was able to play such sublime football with his ‘crooked legs’.

As you’ve picked up through the introduction above, Garrincha wasn’t exactly blessed with what many would call a normal body when he was born. In fact, it seemed all but impossible that this deformed child would evolve into a global phenomenon in sport. Doctors were not even sure if Garrincha would be able to walk without assistance, never mind play for Brazil and win multiple World Cup trophies – more on this later! So, exactly how did he stumble upon football and grow into the legend that he became?

Garrincha at the World Cup

Well, football in Brazil was already immensely popular when Garrincha was a boy. According to reports of his life, he would go and play on the many outdoor football pitches that were available around his local town, Pau Grande. But there was an issue, this factory town did not have a professional team, nor did it have a bunch of prospects for Garrincha. However, his skills on a football pitch caused a ripple of rumours around surrounding towns and villages. And he was ultimately approached to go and play for a small semi-professional club in Serrano. This was the first time that Garrincha would be paid, while also receiving food and lodgings for his new club.

This didn’t last long, as Garrincha was just way too good to live anything that resembled a normal ‘working life’ in Brazil. He ultimately received a professional contract with Botafogo in 1953, where he spent the bulk of his career until he left there in 1965.

It’s one thing to play for a professional club, which many young Brazilians would have snapped their hand off for at the time. But again, the things that Garrincha could do with the ball just couldn’t be contained to club football. After just a couple of years playing at Botafogo, Garrincha received the call-up to represent Brazil in the national team. Between the years 1955 and 1966, Garrincha would play a total of 50 matches in the Brazil shirt. And one cannot argue with the accomplishments of this man during those years. 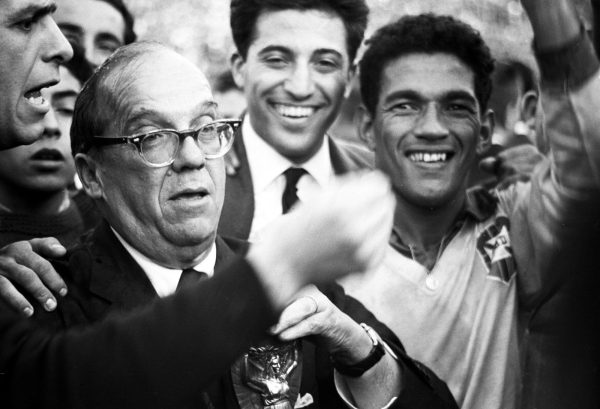 He played for Brazil in both the 1958 and the 1962 World Cup tournaments. Brazil won both tournaments with Garrincha in the squad, and this was also the result of another key man who you may have heard of – Pele. Yet he also played for Brazil during the 1966 World Cup, but his career and subsequent abilities on the pitch were declining at that point. Because of that, and due to Brazil losing several legends prior to the 1966 event, they did not win the tournament.

However, the fact that he won two World Cup trophies during his time playing for Brazil is no small feat. And for that reason, we’d like to discuss the tournament which transformed Garrincha into a legend of the game, forever. That would be the 1962 World Cup tournament, as detailed below.

Garrincha at the 1962 World Cup – the legend is sealed

When the 1962 World Cup tournament came around, Garrincha already had one World Cup trophy in his locker. And he was established as one of the top dribblers in the world at the time, playing on the right wing for Brazil in a fixed position. There was one key reason as to why Garrincha shined through as one of the game's greats in this tournament, however, and it’s not what you might expect. Basically, during the successful 1958 campaign for Brazil, the duo of Garrincha and Pele was almost untouchable.

So the fact that they were both in the squad for the 1962 World Cup was exciting for Brazilians, to say the least. But Pele actually got injured during one of the early games, which sidelined him for the entire tournament. Therefore, the duo was split, which left Garrincha to carry the hopes of a nation on his shoulders. It would seem that he dealt with the pressure and expectation extremely well too. When the World Cup was over, Garrincha took home the Golden Boot award (most goals), Golden Ball (best player in the event), as well as the World Cup – all in the same tournament. 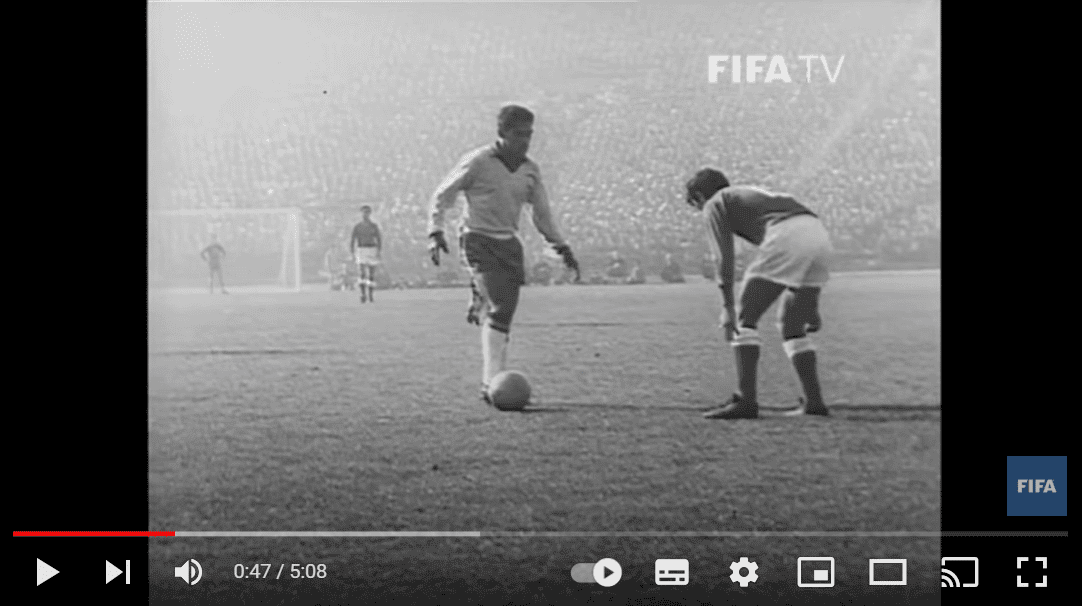 This was helped by the fact that Garrincha scored 4 goals during the tournament, with 2 in the quarter-final and 2 in the semi-final. Of course, it wasn’t just these pivotal goals that contributed to the awards earned. It was his overall performance in which he tormented defenders, and created assists that were out of this world, and his leadership was also sensational.

How the crooked legs legend bolsters this story

It’s pretty rare to see a young man come from a relatively poor background, while also being born with several deformities, playing on the biggest stages in football for his country. But Garrincha is one of those guys who defied the odds, and he has inspired millions of people around the world through his achievements. However, when people speak of Garrincha and his World Cup triumphs, the crooked leg legend is always brought up.

For that reason, let us give you a final breakdown of this famous deformity, as well as a couple of other things that Garrincha overcame to enjoy such a great career.

The truth of his crooked legs

It might seem a bit unfair, and it’s definitely unkind to refer to Garrincha as the man with the crooked legs. However, this is simply the English interpretation of Garrincha’s deformity, and in Portuguese, it’s a nickname that he owned and enjoyed throughout his career. After all, he did have this deformity, so he probably enjoyed that everyone learned about this problem, yet they still couldn’t contain him on the pitch! So what actually was the problem with his legs? 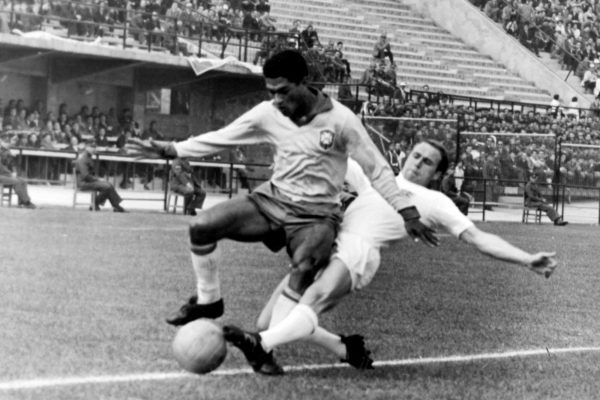 Essentially, his right leg was 6cm shorter than his left at birth. This obviously hindered the way in which he walked, and according to official reports, a leading doctor certified Garrincha as disabled. Because of this, he learned to walk in a way that was obviously not what many would consider normal. But that wasn’t the only problem. With one leg shorter than the other, Garrincha was also born with knees that turned in different directions. And this is why the appearance of his legs appeared ‘crooked’, yet it certainly didn’t seem to hinder the way in which he played the game.

Who knows, it may have even helped him with his agility, sharp turns, dribbling skills, and more.

As you can probably imagine, those in the professional world of football were somewhat reluctant to take Garrincha on as a paid player. It’s not that he wasn’t a great player, as he certainly was. It was more the fact that doctors for many of the respective teams had major reservations about how long he could keep that level going before the obvious deformities started to cause problems. However, Garrincha proved these doubters wrong time and time again. He just kept getting better for both club and country, hence the success that he enjoyed throughout his career.

It’s just a shame that this ability to silence the doubters and overcome the odds did not transfer into his personal life. Unfortunately, Garrincha passed away at just 49 years of age due to many years of heavy drinking. The legend was taken too soon, but the fact that he is still regarded as one of the best of all time tells you all you need to know.