When you think of famous handballs in football, it would take a brave man/woman to say that there is one more famous than the ‘Hand of God’. Of course, this one occurred against England by the now infamous Diego Maradona. However, if you ask a Frenchman or an Irishman, the answer would likely reference the Thierry Henry handball during the qualifiers for the 2010 World Cup. If this is a brand new story for you, let us give you an overview.

Thierry Henry Handball – the gist of what happened

Basically, neither team had earned automatic qualification through to the World Cup. So, France found themselves in a playoff game against Ireland to even qualify – something that the French likely didn’t anticipate. Regardless, France managed to win the first game in Ireland to the tune of 1-0. And in the return leg in Paris, the Irish were beating France by 1-0 until the Thierry Henry handball happened. Essentially, Henry prevented the ball from going out for a goal kick and played through an assist for France to score. The only problem was that he kept the ball in play with his hand, something that Maradona himself would’ve been quite proud of.

Anyway, this goal then sent France through to the World Cup and sent Ireland back home without reaching the big stage. As you’d expect, the Irish team and their fans were far from pleased about what had happened – which brings us onto the way in which this event changed the tournament as a whole. 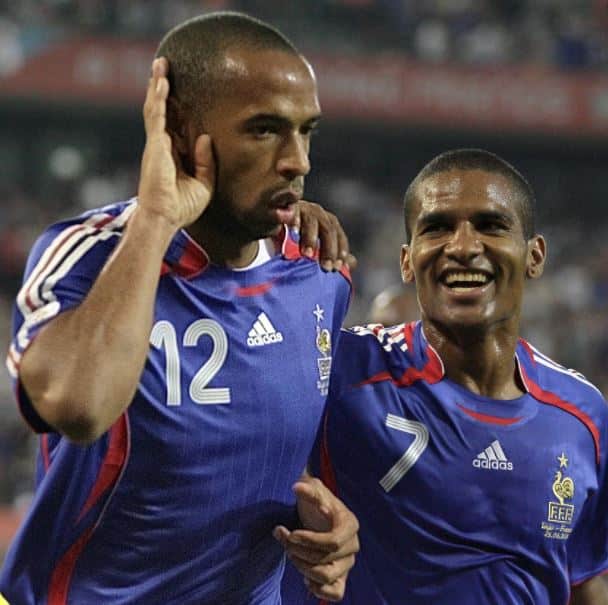 To get the obvious out of the way, the Thierry Henry handball sent France into the main draw and meant that Ireland would miss out on the finals. Some would say that this changed the course of history, which it did, just not in a groundbreaking way – unless you ask an Irish football fan that is. But beyond the altercations on the pitch and the change of which team arguably deserved to qualify, this event had other consequences that people don’t always recognize.

Another catalyst for VAR

As you are no doubt aware, this wasn’t the first major fail from referees in international football, especially at large competitions. And as it happens, it certainly wasn’t the last either – with England being denied a goal against Germany in the knockout stages of this very tournament, despite the ball being a good foot over the line. Anyway, a failure of such proportion did actually prompt FIFA to hold an emergency meeting for the introduction of technology that would prevent such mistakes from happening. Sure, it didn’t happen immediately, but it certainly paved the way for the VAR technology that we see today.

A historical victory for Henry (of sorts)

Okay, nobody wants to see cheating in any way, shape, or form, in any sport. However, it obviously happens to some degree, especially in football. Some would say that players diving on the floor following minimal contact is cheating and that trying to injure a player prior to getting a shot away is also cheating. It happens, and even with VAR, it’s still not caught out all of the time. But coming back to the Thierry Henry handball, as far as cheating goes – he is the only man to have handled the ball twice and then created a goal, beating even the famous Hand of God incident from Maradona. He has definitely gone down in the record books, so technically speaking, it’s a historical victory for the guy.

The backlash following this incident was so brutal on Thierry Henry that he publicly stated that he was considering retiring from international football. Then again, he didn’t help himself by telling the Irish defenders after the game that yes, he did in fact handle the ball – twice. He was receiving all kinds of abuse from Irish football fans in the media, on social media outlets, and more. It can’t have been very pleasant, but it wasn’t just Henry feeling the heat. The referee was also considering retiring from his role given the huge mistake that was made, combined with the heat coming in his direction.

With this in mind, other players were able to get a direct view of the kind of impact that such actions had if they were caught out. To be honest, this would make any international player think twice before attempting such a thing, and for the referee’s – there is now VAR to have their back.

What would happen with the Thierry Henry handball these days?

We’ve mentioned VAR quite a few times now, and this is the main change that has resulted because of such incidents. Nowadays, the use of VAR should ensure that such major scandals do not happen again, and it certainly reveals the pressure on the referee and their assistants. So, what would happen if the Thierry Henry handball was to happen in this day and age? Well, for starters, the VAR assessment would catch Henry out for the handball and the goal would be denied. Of course, this would change the entire course of the game, and history could well be different if VAR was being used and caught the incident.

But it wouldn’t just result in the goal being denied – if you watch the replay of this incident it certainly seems that Henry handled the ball deliberately. Therefore, if he was to handle the ball deliberately in order to gain an advantage, he would no doubt be shown a card. The Irish team would then be awarded a freekick from within their own box and then play the ball back up the pitch with the score still being 1-0 to the Irish.

Unfortunately, this is all if's and maybe’s, and we certainly cannot change the course of history, no matter how many times we look back and think how things could have been different.