If you’re an England football fan, there is a strong chance that you know exactly who Paul Gascoigne is. In his heyday, he was hailed as one of the best midfielders that England has ever had. ‘Gazza’, as he is popularly called, was one of the most skillful and talented players with a ball at his feet during the 80s and 90s. At times, opponents could barely touch the ball when he had it, and going into the 1990 World Cup, Gascoigne was undoubtedly a key player for England. And in that World Cup, he did play an important role in England making to the semi-finals.

This is actually the focus of the information we are about to share. In that semi-final match against West Germany, Gascoigne was given a yellow card for a bad challenge during the match. And amazingly, he broke down into tears on the field after receiving this card. This was something completely unexpected, especially since Gascoigne was a bit of a ‘hard man’ both on and off the pitch. He received the card during extra time as well, which made it hurt even more given that he was so close to the end of the match. 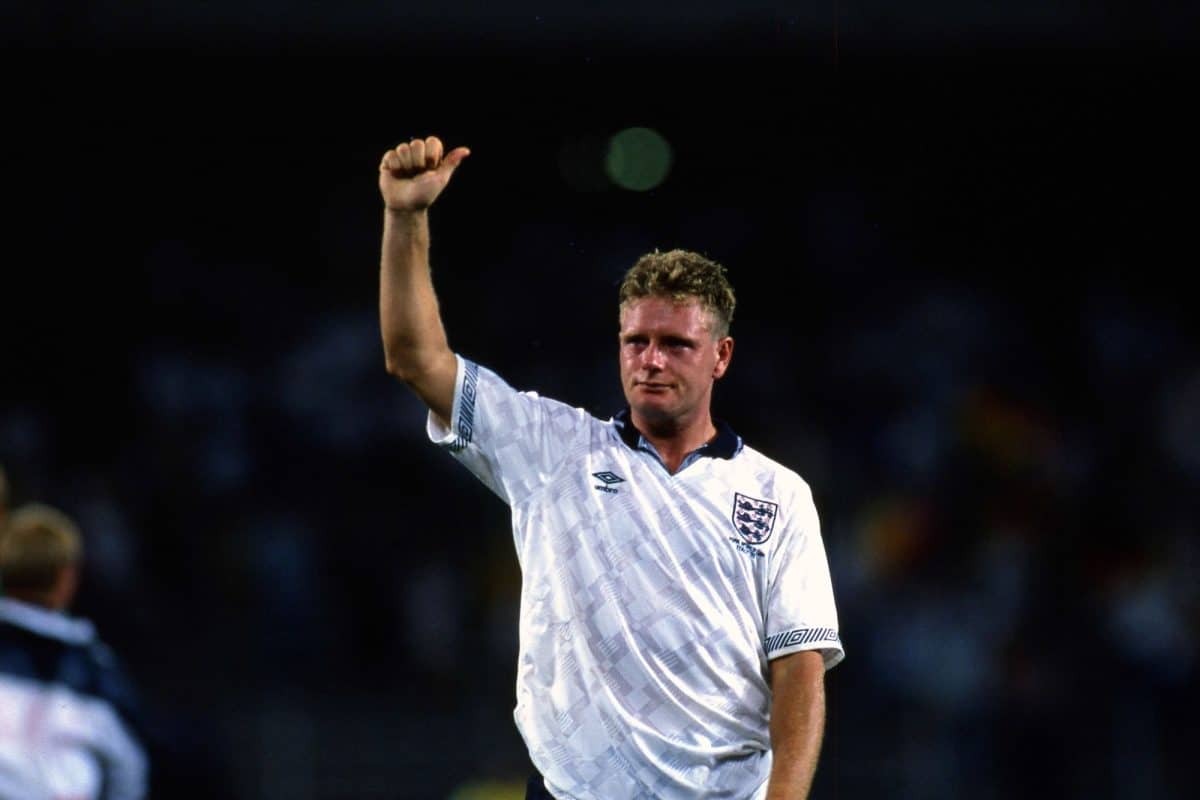 Gascoigne had played a great game up until that point, and many would agree that he was the star of the tournament for England. And to this day, the yellow card that he received in the semi-finals is a major sore point, as well as a contentious one. But history tells a story, and the fact is that he received the card, burst into tears, and provided a moment that the football world would never forget.

All of the details surrounding this moment will be revealed throughout. So do read on and enjoy.

Gascoigne’s role in the 1990 World Cup

Paul Gascoigne played as a midfielder for England in the 1990 World Cup. Well, he played as an attacking midfielder, technically speaking. He was put in such a role because of his dribbling abilities and his speed, which proved problematic for many teams in the tournament. Not only that, but Gazza could put the ball on a dime for other guys in the England squad, helping to assist with many key goals. Finally, he was a fairly handy shooter of the ball when he had the opportunity. However, he wouldn’t actually hit the back of the net at any point in the 1990 World Cup.

Yet this shouldn’t overshadow his phenomenal contributions throughout all of England’s World Cup matches. He was pivotal in supplying guys like Lineker and Platt with the ball to generate scoring opportunities, and he also frustrated England’s opponents with his strength, speed, and skill. This was all the more impressive given that Gascoigne was the youngest player in the squad for the 1990 World Cup. So despite his ‘inexperience’, he seemed like he belonged on the World Cup stage. And if you watch highlights of any of England’s games from that tournament, Gazza was always at the heart of the action.

But that fateful night in Turin, against West Germany, Gascoigne had nowhere to hide from his emotion. England fans, and probably the whole world, felt sorry for Gascoigne at that moment. His passion for the game, his desire to win, and his outright pride in wearing the England shirt all spilt out into a fit of tears. But why was this one yellow card so significant, and why did it prompt such a reaction? Let us tell you now.

Specifics of the yellow card incident and Gascoigne’s tears

There are a few things that you need to understand regarding Gascoigne’s yellow card incident in 1990. And it all begins with the round of 16 game against Belgium, which England managed to win 1-0 in extra time. So let us start there and work our way forward:

Since England won their group to make it to the knockout stages in 1990, they were drawn against Belgium for the round of 16 match. This was always going to be a tough and hard-fought game, and it proved to be exactly that. The game was goalless after 90 minutes, and the deciding goal would come from Platt in the final minute of extra time. Of course, this was a huge moment for England, and for Gascoigne. But there was one dark cloud hanging over the England team after the match.

Gascoigne picked up a yellow card during the game, for a foul that he made on the Belgium player, Enzo Scifo. In World Cup competition, this meant that Gascoigne would have to be flawless in the other games to avoid picking up another yellow. If he did, it meant that he would receive a one-game suspension. And as you know, that’s exactly what happened.

The 1990 World Cup was a fairly successful campaign for England. They made the semi-finals by beating teams like Belgium, Egypt, and Cameroon en route. Yet the semi-finals were never going to be easy, especially with the squad that West Germany had at the time. However, England had some pretty handy players themselves, with Gascoigne being one of the best, if not the best for that tournament. So, all they had to do was beat West Germany for another shot at the World Cup title, and England fans were truly starting to believe that this could be their time. 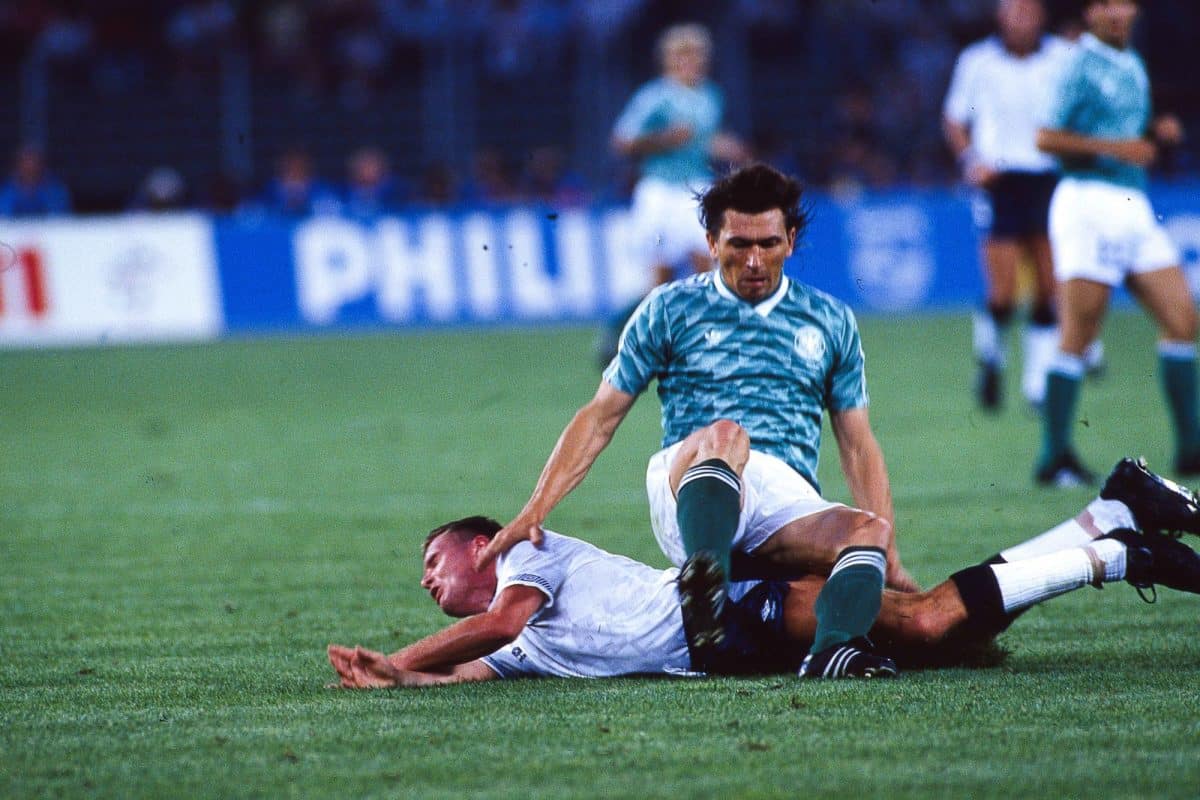 England went 1-0 behind after 60 minutes courtesy of a goal from Brehme. But Lineker would be the man to strike back for England, and he scored in the 80th minute. Ultimately, this goal would force extra time, which is where Gascoigne’s incident materialized. In the 99th minute of the game, Gazza nudged the ball slightly too far while dribbling amongst several German players. The ball ran on to Thomas Berthold, and Gascoigne lunged in to challenge him, yet this move would prove fateful.

Berthold fell to the ground and rolled around in agony. The German players rushed the referee in protest to get a card for Gazza, and that’s exactly what he got. He wasn’t out of the game, of course, but he was going to miss the World Cup final if England was to win. This is the moment where Gascoigne simply burst into tears, as he knew exactly what the implications were of the card he had just received.

Other, less-known elements of the yellow card

The yellow card given to Gascoigne in the semi-final of the World Cup was a defining moment in England’s tournament, and indeed for Gazza’s career. Since receiving that yellow card in the 99th minute, his performance for England definitely dipped in that particular game. He was unable to make an impact beyond that moment, and England ultimately lost the game 4-3 on penalties. But there are other parts of this story that aren’t as well documented, which we’d like to share now:

It was Gary Lineker who was one of the closest to Paul Gascoigne at that exact moment. Lineker claimed that he could see the bottom lip quivering, the tears welling up, and he knew exactly what was happening inside Gazza’s mind. However, people forget that Gascoigne wasn’t out of the match, he was simply out of the World Cup final. But given the emotion he was feeling, Lineker tried his best to keep Gascoigne calm and keep him on the field to end the game. After all, they still had a semi-final to try and win. 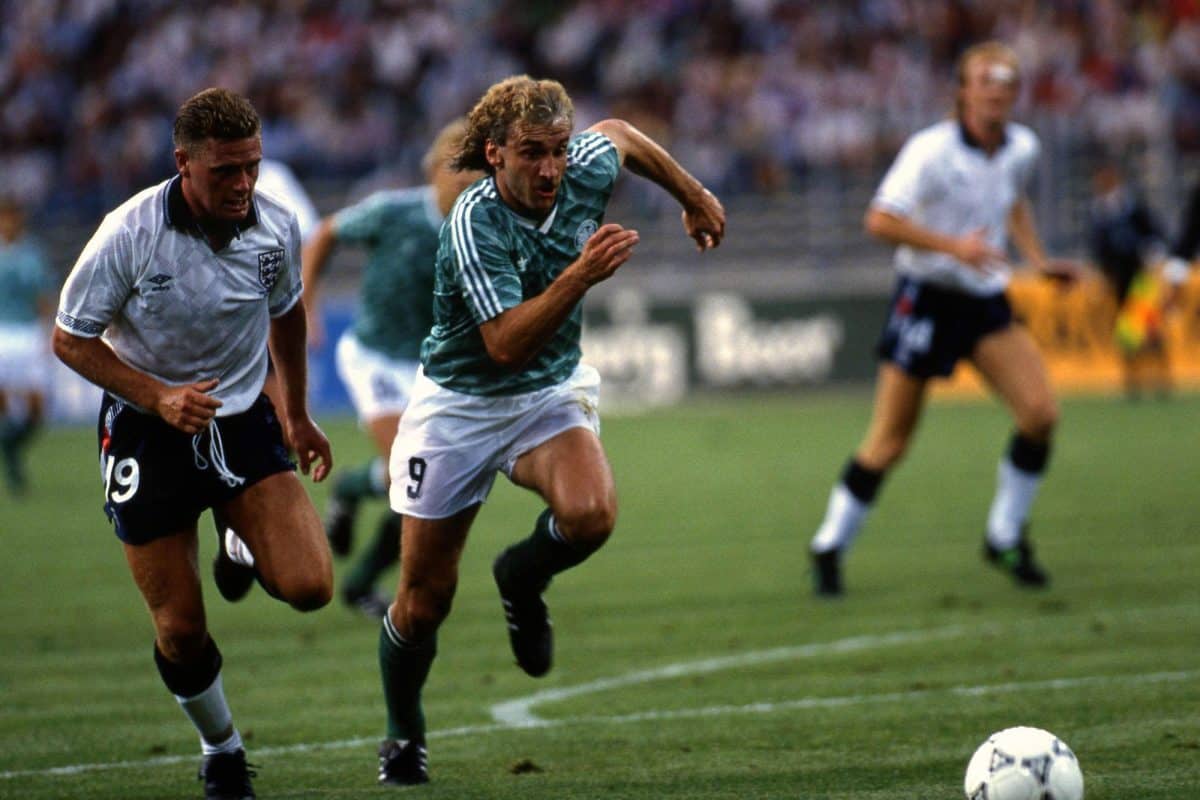 Bobby Robson was the manager for England at the 1990 World Cup. And even he has stated that his heart sank once the card was produced. Obviously, Robson knew how pivotal Gascoigne was for England’s success, and he would’ve known exactly what this yellow card meant. His star man was thrown off his game from a mental standpoint, and he knew full well that he wouldn’t have Gascoigne as an option for the World Cup final. But instead of feeling anger at the challenge from Gascoigne, all he felt was empathy.

The referee for this game was Jose Roberto Wright. So of course, he is a major part of this story as it was he who decided to pull out a card and hit Gascoigne with a yellow. As you’d imagine, he’s been painted as a bit of a demon by England players and fans.

And despite Gascoigne’s protests at the time, Wright maintains that there was absolutely no controversy in his decision. Rightly so, he says that his job at that time was to enforce the rules of the game and not think about the implications of issuing a card for later matches.

Gascoigne protests the decision to this day

In Gascoigne’s autobiography, he details the incident. However, he maintains that he did not touch the German player whatsoever, and therefore, he disagrees with the decision of the yellow card. Whether he did or he didn’t touch the player, and whether he deserved a card or not, is a debate that rages to this day. But regardless of different opinions, one cannot dispute that this incident changed the course of Gazza’s career.