Spain didn't get off to the start they had planned for Group E but neither did Poland. Spain were held to a goalless draw by Sweden while Poland lost 2-1 to Slovakia and now both teams will be desperate to secure a win on Saturday.

Read on for our full match preview and prediction for Spain vs Poland in the European Championship.

Our Best Betting Tips for Spain vs Poland

Both teams have scored in two of the last four meetings between Spain and Poland and going by their performances in the opening round of group games, we're backing both teams to score this weekend. Spain might have played out a goalless draw with Sweden but they created ample opportunities to win the game and conceded two big chances that could have seen them lose, while Poland looked good going forward against Slovakia but their marking at the other end of the pitch left nothing to be admired.

Moreno didn't start against Sweden but when he came on he had a couple of good chances to score and offered far more than the lackluster Morata, who looks low on confidence. Even if Luis Enrique decides to use Moreno from the bench against Poland, the Villarreal man has a great chance of scoring as he has a knack of getting into the right places at the right time and is an excellent close-range finisher.

Other markets: Lewandowski to score one or more

We're going to take a look at a selection of the markets revolving around Poland striker Robert Lewandowski. Poland are the underdogs but if you want to back Lewandowski in this game you could choose anytime goalscorer, first goalscorer or even last goalscorer. SBK are offering 11/5 on the Bayern Munich striker scoring at any time against Spain, but only at 34/5 to score the first or the last goal of the game. If you really want to show your loyalty and faith in the Polish striker, he can be backed to score a hat trick at anywhere between 150/1 and 66/1.

All the stats you need ahead of Spain vs Poland

Spain couldn't do much much against Sweden to win the game, other than putting the ball into the back of the net, obviously. Spain looked very good with their high-pressing game and quick attacking style and just need to provide better services to their attackers and commit more bodies into the box. Poland will come at Spain far more than Sweden did and this should leave Spain with the option for direct counter-attacks. The Spanish defence does look a little dodgy at times but that will surely sort itself out the more the back four play together during this tournament.

Poland will be without the suspended Krychowiak for the game against Spain, a player that has a key role in the heart of the Polish midfield and will be missed. Poland were guilty of not getting enough service to their star striker Lewandowski, who was really feeding off scraps in the game against Slovakia. More cross into the box are needed if they are going to give the 32-year-old Bayern Munich goal machine a chance of scoring the goals they need to progress in the Euros. Poland don't keep many clean sheets under Paulo Sousa so they will need to improve in the final third if they are going to outscore this Spanish side. 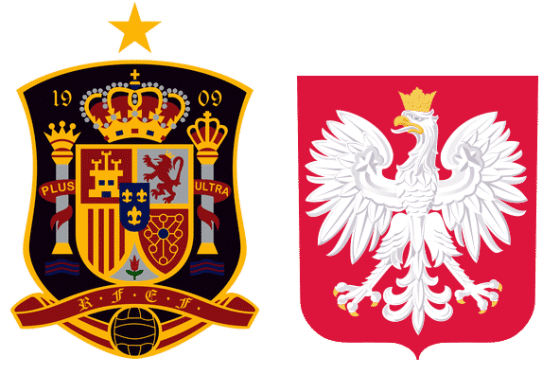