Sheff Utd's inevitable relegation from the Premier League was confirmed last week following their narrow defeat away at Wolves, equaling the record for the earliest any team has suffered relegation since the Premier League was introduced in 1992. Bright secured a decent point away at Chelsea but have to make that result count for even more with a win against the Blades, as the Seagulls still remain in danger of going down along with this weekend's hosts.

Read on for our full match preview and prediction for Sheff Utd vs Brighton in the Premier League.

Brighton have proven themselves to be an open and attacking side and while this style of play hasn't always produced the results, it has been very pleasing on the eye. The Seagulls will be expected to control Saturday's game and given the fact that Sheff Utd have failed to score in five of their last six matches, a single goal would likely prove enough to win the game.

Under 2.5 goals have been produced in three of Sheff Utd's last six matches as well as in each of Brighton's last two Premier League games, so you can see why we're predicting another tight and tense 90-minutes on Saturday. Five of the last seven encounters between these two clubs have also produced under 2.5 goals, with the pair playing out a 1-1 draw in December's reverse league fixture.

As mentioned above, Sheff Utd continue to struggle for goals this season, failing to score in five of their last six matches, while Brighton like to play an open, expansive style of football that tends to create enough goalscoring opportunities to win a game. Something Brighton struggle to covert their chance and that has been their biggest issue this season, but they have only failed to score in two of their last six outings and one goal should be enough to beat the Blades.

All the stats and key markets for Sheff Utd vs Brighton

It was sad to see Sheff Utd relegated last week, especially after their performance last season, but poor signings and a lack of a Plan B has cost the Blades their place in the Premier League. With relegation confirmed, Sheff Utd can relax as there is no pressure on their performances or results from now until the conclusion of the final game of the season and it could be a good time to blood some of their up and coming youth players. Berge, MvBurnie, Robinson, O'Connell, Sharp and Basham all look set to miss the game against Brighton through injury, another few reasons not to expect much from the home side this weekend.

Brighton aren't without their fair share of injury concerns ahead of Saturday's clash, with Lamptey and March ruled out through injury and both Andone and Tau close to a return to action. Ben White will also miss this game through suspension. The Seagulls will be looking to build upon decent goalless draws against Everton and Chelsea with a win that would take them on 37pts and a step closer to Premier League survival. Bright arrive having secured two wins, two draws and just one defeat from their last five league games and should have enough in them to beat Sheff Utd. 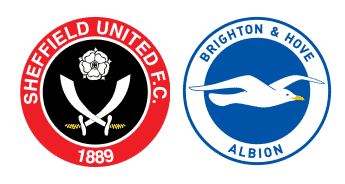