Take a read through the latest Premier League transfer news for today with Football Whispers! All possible transfers are rated out of 5, based on their likelihood.

It’s official guys – the 2021 summer transfer window is closed but the rumours continue regardless and it won't be long before we see if any of them turn into something concrete when the January transfer window opens. Since it’s still early doors, there are few moves that are already locked in, but the EPL transfer news stories are revealing themselves almost daily! Below, we’ve covered some of the hottest EPL rumours and transfer news – so do read on and enjoy. 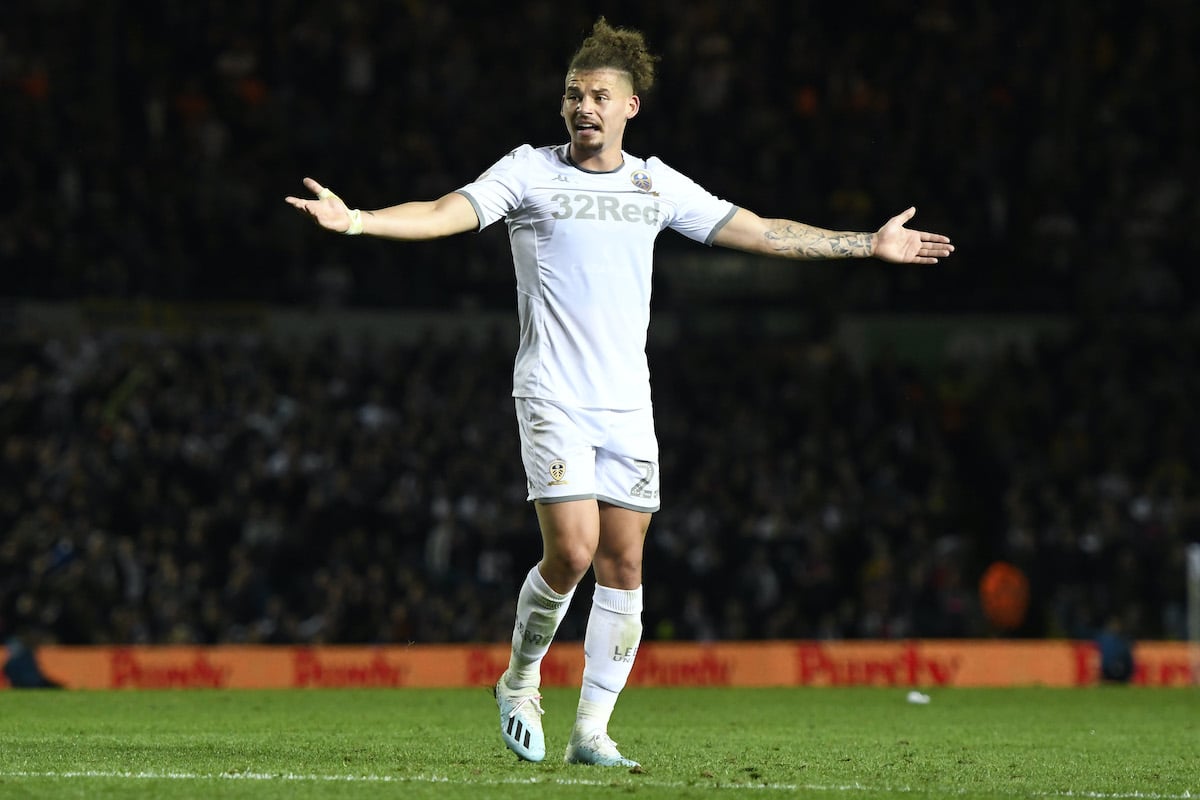 Pep Guardiola has identified Kalvin Phillips as one of his main targets for next summer's transfer window, as it is unlikely that Leeds would sell their prized asset in January.

Man City failed to bring in Harry Kane and Cristiano Ronaldo in the last transfer window but the manager believes his side still have enough within their squad to achieve their targets for the season. Fichajes.net are reporting that Man City will move for Leeds' midfielder Kalvin Phillips next summer and that Guardiola is a big fan of the England international and feels he is ready to make the step up to a bigger club.

Phillips has proven himself in the Premier League and at international level so it is only a matter of time before one of the ‘big boys' makes their move for him.

Mundodeportivo.com are reporting that Barcelona will attempt to sign Belgium and Leicester playmaker Youri Tielemans next summer and the player is said to be keen on a move to La Liga.

Tielemans, 24, has proven himself in the Premier League with the Foxes and is one of Brendon Rodgers' most consistent performers. Leicester are a selling club and certainly won't stand in Tielemans' way but will only let him go once they have a replacement lined up.

Tielemans is a class act and would suit Ronaldo Koeman's new-look Barcelona side and with the Belgian international's contract up in 2023, he might not coast as much as everyone would expect.

Everton to Return for Nathan Patterson in January

The Toffees tried to sign Rangers full-back Nathan Patterson in the summer but the Gers were unwilling to sell their teenage prospect. However, it is believed that Everton will go back in for the youngster in January and are expected to have more success this time around.

With Coleman coming towards the end of his career and unable to play a full season without picking up injuries or needing a rest, a young understudy that can learn a lot from the Irish international in a short space of time makes sense and Patterson fits the bill.

The Sun are reporting that Everton will get Patterson, especially now that Liverpool have apparently pulled out of a deal to sign him. The offer of first-team football is likely to make Everton an appealing prospect for Patterson and we can see this deal going through in January or possibly next summer.

Real Sociedad's Alexander Isak continues to impress following some decent performances at Euro 2020 and is a target of a number of Premier League clubs according to TeamTalk.com.

The Swedish striker scored 17 goals in La Liga last season and at the age of 21, Isak has plenty of development years in front of him which suggests that he could become a top-class striker in the future. Arsenal, Liverpool and Chelsea are all keeping tabs on the Sociedad frontman whose future looks destined to lie in the Premier League.

Todofichajes.com believes that Tottenham are eyeing a move for Ajax youngster Jurrien Timber in January.

20-year-old Timber is already impressing for Ajax and looks set to have a big future ahead of him. Spurs are said to be very interested in the utility man who can play across the defence and in a holding midfield role.

Chelsea are also said to be keeping tabs on the Ajax star so Tottenham could have some competition for his signature. As things stand, Timber is contracted until 2024 and is valued at around £20m but that price will go up if he continues to play well and signs a new contract with the Eredivisie side.

Chelsea looking to bring Sane back to the Premier League

The Express are reporting that Chelsea are open to the idea of a possible swap deal for Bayern Munich star Leroy Sane with Callum Hudson-Odoi tipped to go the other way.

Bayern Munich boss Julian Negelsmann is said to be struggling to get the best out of Sane and would possibly be open to selling the 25-year-old if Bayern can't get the best use out of the German international before the January transfer window opens. Tuchel is building a quality side at Chelsea and the addition of Sane would only enhance his side even further, though, it could be argued that the London club don't really need to strengthen in that particular area.

Hudson-Odoi was a target of Borussia Dortmund on deadline day and came fairly close to agreeing on a deal with the Bundesliga club. The form of the English winger has dipped since he burst onto the scene but in fairness to him, he hasn't been a regular starter and needs a good run in the team to continue his development.

Calciomercato.it believes that Tottenham want to sign Frank Kessie from AC Milan and would be willing to offer Tanguy Ndombele in exchange for the want-away Ivory Coast international.

Juventus are said t be interested in the AC Milan midfielder whose contract expires in 2022 and it is believed that the former Atalanta man has no intention of signing a new deal. PSG are also said to have shown an interest in Kessie and could offer AC Milan Mauro Icardi or Leandro Paredes as part of any deal to take the Serie A man to Ligue 1.

Surely, AC Milan would prefer to take someone like Icardi in any swap deal rather than Ndombele who has failed to impress since making the move to Spurs, but then again the Argentine forward did you to play for their local rivals Inter Milan.

James Rodriguez failed to make his move to Proto on deadline day but he could still yet leave Everton as the Portuguese and Turkish transfer windows are still open.

Footmercato.net believes that Istanbul Basasehir could be in the hunt for James, who has been told by his manager Rafa Benitez, that he can leave Goodison Park. The stumbling block of any potential move away from Everton at this moment in time is the players' wages and his unwillingness to take a pay cut. AC Milan and Atletico Madrid both considered signing James but decided against any move for the Colombian.

If Everton do end up keeping James then sure Benitez will have to find a way to utilise the player, even if that means bringing him off the bench for the last half an hour of games when the club are searching for an equalising or winning goal. James may well get his move to Turkey as some of the bigger clubs over there do spend over the odds on player wages and any deal would either be a loan or likely see James move on a free transfer as Everton are keen to recoup his massive wages and invest them elsewhere.

Arsenal's Elneny could move to Turkey

Sticking with the Turkish Super Lig, Besiktas have been linked with a move for Arsenal's Mohamed Elneny.

The Daily Mirror suggests that Elneny is unwanted at Arsenal and a move had been agreed for the player to leave the London club only for the deal to collapse due to the player's wage demands. Besiktas were the team that had agreed on a deal for the Egyptian midfielder and are said to be interested in renegotiating with Arsenal to find a way in which the player can make his move to Turkey.

The 29-year-old isn't in Arteta's plans and hasn't done enough since making his move to the Premier League in 2016. A move to the Turkish giants would hand the player a chance to reignite his stagnating career but the temptation to see out his lucrative contract with the Gunners might see him stay put.

Are the betting markets currently open for transfer betting?

Yes, and they have been open even before the EPL transfer period actually opened up. At most leading betting sites, you’ll find options and quality odds for many of the news stories we’ve talked about, although the odds won’t stay as they are for very long.

How much longer can I bet on the transfer markets for 2021?

The markets you see on any betting site will only be available up until the news gets confirmed over which player is moving where. With that said, new EPL markets will be added as and when more stories get released, which could be today, tomorrow, and any other day during the transfer period.

Are any of the markets you’ve talked about here guaranteed to come through?

We’d love to say yes, but this would be a bit misleading. Unfortunately, we can only go from the information that is readily available online. But the respective odds provided by major bookmakers are also a good indicator of the likelihood that any particular transfer will ultimately happen.

Will the odds listed here change around as more news/rumours get published?

Yes, and that’s mainly because the football transfer market is very responsive to news stories and circulating rumours. As and when more stories come forward that would make any of the potential moves increasingly likely, it’s certain that the odds will change.

How old must I be to wager on transfer markets in the UK?

In the UK, you must be over the age of 18 to sign up with any licensed bookmaker, and you must also be a UK resident too.

In the spirit of the transfer window being open once again, we figured we’d have some fun and look back at some of the more historic transfers to ever occur in the Premier League.

It’s almost hard to believe that this was more than 20 years ago, but in terms of historic transfers, this is one of our all-time favourites. Henry made the move from Juventus to Arsenal for a fee of just over £14 million – one of the bargains of the century looking back. Wenger turned Henry from a dangerous winger into one of the best strikers of all time!

Come on, we had to mention the birth of one of the greatest strikers there has ever been, whether in the EPL or anywhere else. Back in 2003, Ronaldo moved from Sporting Lisbon to join United, under Sir Alex Ferguson, of course. And as they say, the rest is history!

This one is a little more recent, but the transfer fee at the time set a brand new record when Pogba moved from Juventus to United for £89 million. Sure, there are many other transfers today that have broken this record, but this was incredible news at the time.

Finally – Droga is one of the icons of the Premier League, yet it wasn’t always this way. Chelsea signed the Ivory Coast man in 2004, and he ultimately became one of the best strikers the EPL has ever seen, not to mention the number of trophies he won during his time there.