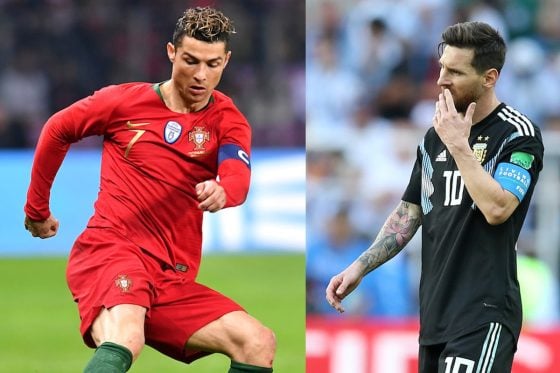 Is there any football record that isn't unbreakable? That is the question to ask when Lionel Messi and Cristiano Ronaldo are concerned. They are once in a generation players and for over a decade have thrilled fans around the world with their attacking exploits. They are the two most loved footballers in the world today and fans debate over which one is better. Heated arguments can arise over which of the two superstars is greater.

The pair have a professional rivalry that extends off the pitch. When playing in Spain for eternal enemies Barcelona and Real Madrid, it was as if Messi and Ronaldo were attempting to outdo each other rather than their opponents on the night. On many occasions, it felt like FIFA as the pair could pull of the incredible on a nightly basis.

Now, with Messi at Barcelona and Ronaldo a Juventus player, it is unlikely fans will be treated to very many head to head matches between them. In fairness to the players, they have both slowed down a step, which was evidenced in the 2019-20 season. Even then, the two players were brilliant on the domestic stage. Ronaldo led Juventus to a second straight Serie A title.

Messi is 33-years-old, while Ronaldo is 35 heading into the 2020-21 season. There may not be much time left for the duo, but they have thus far, given fans plenty of exciting records that may never be broken. 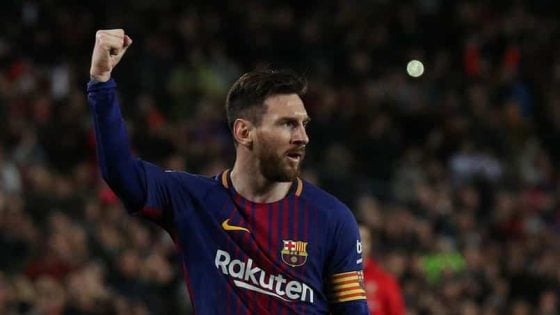 The Pichichi is handed out each season in Spain to the top goalscorer. Named after Athletic Bilbao legend Rafael  “Pichichi” Moreno Aranzadi, the trophy has been given to some of the greatest players to appear in La Liga. Although given to many great goalscorers, no player has been as proficient as Messi. The Argentine has won seven Pichichi trophies with his most recent coming in 2019-20.

Messi scored a brilliant 25 goals in 33 appearances for Barcelona in La Liga during the campaign averaging 0.78 goals per minutes. Remarkably, Messi has scored double-digit goals each season since 2005-06. The 2019-20 season marked his fourth consecutive Pichichi award and took him above Telmo Zarra in most all-time wins. There is every reason to believe Messi will record an eighth Pichichi next season. 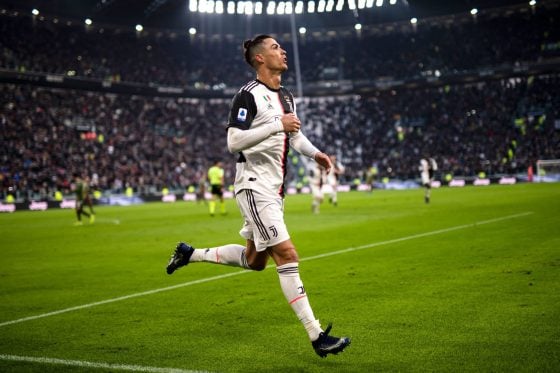 Twice during Ronaldo’s six-season run of 50 or more goals, he topped the 60-goal mark. The forward bagged 60 goals in all competitions in 2011-12 with 46 of those strikes coming in La Liga. Remarkably, those 46 goals came in just 38 league appearances.

The 2014-15 season was even better for Ronaldo. He scored 61 times in all competitions. In just 35 appearances, he scored 48 times for Los Blancos. It was an incredible domestic return as Ronaldo and Messi made a joke of the goalscoring records in Spain and Europe.

While Ronaldo dominated Spanish and European football for six years scoring 50 or more goals in each, Messi achieved his own goalscoring feat of consistency. The Argentine bagged 20 goals in 12 consecutive campaigns for Barcelona showing just how unbelievably consistent he is in front of goal.

In 2019-20, Messi scored 25 times in 33 appearances for the La Liga outfit. He has the chance to extend his consecutive 20-goal seasons record to 13 next term.

Messi has benefitted from playing for a Barcelona team that had a golden generation of players come through La Masia at the same time. Xavi, Andre Iniesta, and Sergio Busquets all came through the youth team with Messi. They were one of the best youth team graduate classes in football history.

The Blaugrana also had some established stars at the club already including Carles Puyol and Samuel Eto’o. They had helped Barcelona win the 2006 Champions League by the time Messi and crew were being filtered into the first-team. Even in the mid-2000s, Ronaldinho, who starred for Barcelona, claimed Messi was the best player at the club; and Messi wasn’t even in the first-team.

In January 2020, after 15 and a half seasons at the same club, Messi achieved an incredible 500 wins as a member of Barcelona. The 500th win came in classic Messi and Barcelona style as the club thrashed Leganes 5-0. Messi’s 500 wins made him the first player in Spanish football to achieve the feat. The Argentine took just 710 games to achieve 500 wins.

Winning a league title is a difficult task. For Ronaldo, it isn’t quite so hard. The Portuguese star is a serial winner and has lifted trophies wherever he has gone. Ronaldo has spent time at four different clubs during his career. He started at Sporting Lisbon before moving to Manchester United.

In 2006-07, Ronaldo helped the Red Devils to the Premier League title, his first as a Manchester United player. Ronaldo would become synonymous with the Old Trafford outfit in the coming seasons rising to the football stratosphere. Over the course of three seasons, Ronaldo won three titles with the Red Devils.

A move to Real Madrid didn’t stop his league winning ways. Ronaldo won the 2011-12 and 2016-17 La Liga titles with Los Blancos. After his relationship with Real Madrid deteriorated, Ronaldo moved to Juventus where he has now won back to back Serie A Scudetti.

Messi has, to this point, been a one-club man. He has won league titles with the Blaugrana. Would he be able to do what Ronaldo has at Manchester United, Real Madrid, and Juventus? Fans can only speculate.

One of the key traits that makes Messi so difficult to defend is his passing. Messi is equally as good at creating goals as scoring them. He showed his creativity in 2019-20 becoming the first La Liga player to score 20 goals and tally 20 assists in the same season.

The 2019-20 season wasn’t a hugely successful season for Barcelona on all fronts. The Blaugrana failed to win La Liga, the Champions League, and the Copa del Rey. Messi was the only bright spot and regular producers of goals for the club whether creating or scoring them.

Messi’s 25 league goals exceeded his 19.2 expected goals figure. In addition, his 20 assists exceed his expected assists number of 15.4. Messi exceeded the numbers showing just how exceptional his play was for the Blaugrana.

Most Real Madrid goals in all competitions – Ronaldo (450)

Ronaldo joined Real Madrid in 2009 in a sensation transfer for £80 million. It was a transfer Real Madrid sought to take them back to the heights of La Liga and Europe. Ronaldo’s arrival also triggered a new era for Real Madrid’s Galaciticos.

While others may have disappointed at the Santiago Bernabeu, Ronaldo did not. He scored a whooping 450 career goals at the club in all competitions. The forward scored those 450 goals in 438 career games in all competitions averaging 1.03 goals per game while playing for Los Blancos.

Of his 450 goals, 311 came in La Liga. It took Ronaldo just 292 career games in La Liga to achieve that figure. He averaged 0.94 goals per game for Real Madrid in the league. Amazingly, Ronaldo scored 105 goals in the Champions League and is the tournament’s all-time goal scoring leader with 129 strikes. One hundred of those goals came with just one club – Real Madrid. 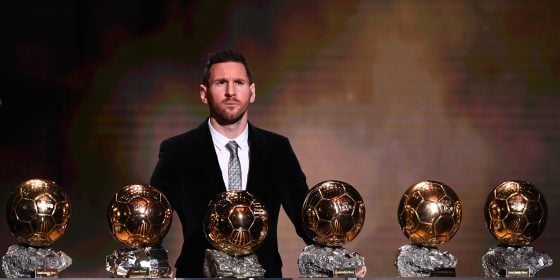 The Ballon d’Or is handed out to the best player in football. The award signifies the recipient was the best footballer of the last 12 months. Created in 1956, the Ballon d’Or was only given out to the best European football player playing in Europe. The rules of the award changed in 1995 when it was announced that non-European players playing in Europe could win the trophy. Finally, in 2010, the Ballon d’Or was merged with the FIFA World Player of the Year award making it possible for any nationality playing anywhere in the world to win it.

Even before the trophies were merged, Messi had recorded his first Ballon d’Or victory. After coming second in 2008 behind life-long rival Cristiano Ronaldo, Messi won the trophy in 2009. That first award was inspired by his performances in the Champions League and La Liga, two competitions Barcelona won in 2008-09.

Between 2009 and 2012, Messi won four straight Ballon d’Or trophies. In three of those years, Messi outperformed Ronaldo to receive the award as the Portugal star finished in second place. In 2019, Messi won his sixth Ballon d’Or edging out Liverpool defender Virgil van Dijk. It was a surprise win after Van Dijk had won the Champions League with Liverpool. However, Messi’s incredible 36-goal haul in 34 La Liga appearances led voters to select the Argentine as the winner.

Ronaldo is also the player with the most UEFA Champions League final wins: 5 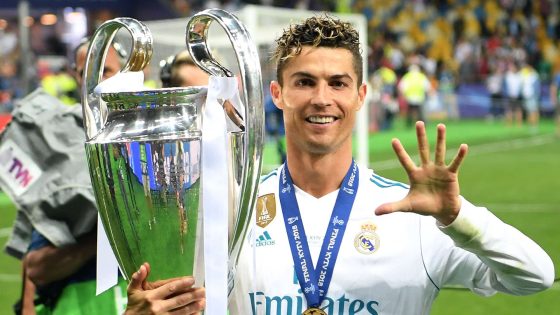 Real Madrid paid £80m to Manchester United for Ronaldo’s services. At the time, Ronaldo was the best player in the world other than Barcelona’s Messi. Seeing that Barcelona could dominate football with the Argentine, Real Madrid went about finding their own talisman.

Ronaldo arrived in 2009 from Manchester United on the back of a domestic double. He was one year removed from winning the Champions League. Expectations were high that Ronaldo would lead Real Madrid to the Promise Land in both La Liga and Champions League. Unfortunately for Real Madrid, it took some time for the club and Ronaldo to win trophies.

In 2010-11, he led them to a Copa del Rey trophy and a year later, the La Liga crown. Although the two trophies look great in Real Madrid’s silverware cabinet, the European Cup is the most important trophy they club fights for each year.

Ronaldo’s four Champions League wins in Spain combined with his one at Manchester United makes him the winningest player all-time in terms of European Cup trophies. If Ronaldo can lead Juventus to the Champions League trophy, he would extend his wins total to six and be the first player to win the competition with four different teams.

For Messi, good things come in threes. The Argentine has scored a ridiculous 36 career La Liga hat-tricks. The number shows that he smells blood after getting the first goal in games. As of 2020, Messi has scored 444 La Liga goals with a large number of those coming in games featuring hat-tricks from the Argentine.

In December 2019, Messi took the hat-trick record from Ronaldo thanks to a multi-goal performance against Mallorca. He went on to bag his 36th later in the campaign. Messi doesn’t just hold the all-time record for hat-tricks in La Liga, but he is tied for the single-season record too. Messi has scored eight La Liga hat-tricks in a single season.