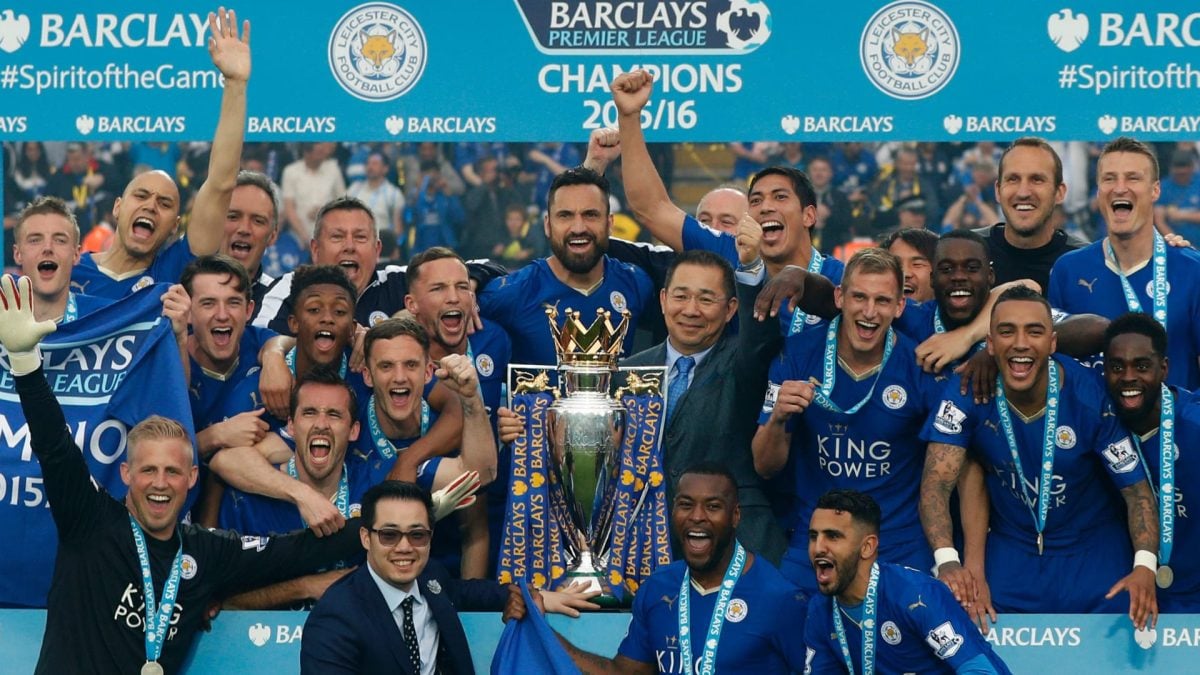 Leicester City did the unthinkable in 2015-16. The Foxes broke the grip that a few select clubs had on the English Premier League title. Up to the 2015-16 campaign, just one club outside of Manchester United, Manchester City, Arsenal, and Chelsea had won the league’s title. Blackburn Rovers in 1994-95 were that club to lift the league’s trophy. When Blackburn Rovers won the competition under manager Kenny Dalglish, it was believed they would continue as a force in the Premier League. However, with a lack of investment in the seasons to come, Blackburn Rovers never fought for the title again.

There was a significant difference between Leicester City’s title win over two decades later. The Foxes didn’t have the investment that Blackburn Rovers did under the ownership of Jack Walker. Leicester City’s core squad was made up of players that had fought relegation the season prior and achieved promotion from the EFL Championship in 2013-14.

Leicester City’s title came under the management of Claudio Ranieri, a coach that was derided by TV pundit and former Foxes striker Gary Lineker. When Ranieri led the Foxes to the title, it left Lineker eating his own words. Under Ranieri’s management, Leicester City punched above their weight collecting 81 points. According to stats crunching website Understat, Leicester City’s expected points (xPTS) was just 68.94. The Premier League’s final table in 2015-16 would have looked much different had teams collected their xPTS. Arsenal would have won the title under Arsene Wenger with Leicester City finishing fourth behind Manchester City and Tottenham Hotspur.

So, how did Ranieri lead Leicester City to the title and punch above their weight? The 10 matches below show how Leicester City created the biggest shock in Premier League history.

Coming off of a season in which Leicester City finished 14th and fought relegation, it was vital that the team got off to a good start. Leicester City appointed Ranieri as manager and many felt that the former Chelsea coach would be dismissed after just a few games in charge.

Leicester City’s first hurdle were Sunderland. The match was considered an early season six-point affair as Sunderland were believed to be a direct rival to Leicester City for Premier League survival. Both teams would avoid relegation but with different routes to remain in the division.

Ranieri’s side didn’t just win but exceeded expectations on opening day. The Foxes scored three times in the opening 30 minutes through Jamie Vardy and two from Riyad Mahrez. Sunderland pulled a goal back on the hour from Jermain Defoe, but Marc Albrighton’s goal six minutes later put Leicester City back on track to win, 4-2.

After winning there two opening games of the season versus Sunderland and West Ham, Leicester City had their first real test. Tottenham Hotspur were a top-six favourite, but manager Mauricio Pochettino had issues in attack. Harry Kane failed to shine on the day as Leicester City’s defence kept him in check.

Even with Kane’s struggles against Leicester City, Tottenham Hotspur were perceived to be too strong going into the game. Erik Lamela, Mousa Dembele, and Nacer Chandli started in midfield giving the team a strong spine. Yet, no player in the Spurs team could slow down man of the match Mahrez. After Dele Alli scored in the 81st minute to give Spurs the lead, Mahrez hit back just one minute later to level the scoreline.

Following the match, Ranieri praised his team’s spirit and spoke about the importance of remaining in the Premier League. There were still plenty of pundits who expected the Foxes to fall back to Earth after gaining seven points from nine possible. The draw against Spurs would be extremely significant in the second half of the season. Tottenham were direct rival to Leicester City in the title fight up to the end of the campaign.

Leicester City went unbeaten in their opening six matches collecting 12 points from 18 possible. Premier League matchday 7 saw the Foxes lose 5-2 to Arsenal at home. It was a game in which the Foxes were outplayed throughout. The football establishment expected Leicester City to be finished with their table topping play following the loss to the Gunners.

The Foxes started matchday 8 in sixth place, their lowest position in the table all season. Rather than drop points for a second straight week, Leicester City bounced back on matchday 8, sealing a nervy victory before the 50-minute mark.

Jamie Vardy’s 28th minute penalty and Jeffrey Schlupp added the second just after the halftime break. Leicester City had to work for the victory in the final 22 minutes, however. Norwich City’s Dieumerci Mbokani pulled a goal back and nearly levelled late on. Nathan Redmond hit the post in the closing moments, but the Foxes held on to claim a huge win.

One of the biggest talking points of the match was Mahrez’s omission from the side. Ranieri took a bold step dropping him, but it worked.

Manchester City finished the 2014-15 Premier League season in second place. Manager Manuel Pellegrini’s team were expected to win the title in 2015-16 and reclaim the championship they won two seasons prior. Yet, just like the season before, Pellegrini and company would come up short finishing fourth.

When Leicester City welcomed Manchester City to the King Power Stadium on December 29th, they were in second place. The Cityzens were third after 18 matchdays. Pellegrini’s team were underachieving and had already lost five league games prior to visiting Leicester.

The teams’ final game of the calendar year was short on goals. The match finished nil-nil with neither side able to make the breakthrough. Although the draw prevented Leicester City from moving back to the top of the Premier League, it was a hugely impressive match following the club’s second loss of the term. Prior to facing Manchester City, the Foxes had lost 1-0 to Liverpool at Anfield.

Stories following the game claimed Leicester City were not going away in the race for the Premier League title. Those headlines were accurate as Leicester City would move into first place in the coming weeks and not relinquish the top of the table spot for the remainder of the campaign.

The Foxes headed to White Hart Lane to play Tottenham Hotspur while sitting in second place. Following their Boxing Day loss to Liverpool, Leicester City picked up back to back draws versus Manchester City and Bournemouth, respectively.

Spurs were fourth in the league heading into the match. Pochettino’s side had got things together and were unbeaten in four straight games prior to Leicester City’s arrival. Yet, for the second time in 2015-16, Leicester City would be a thorn in Spurs’ side.

Vardy returned to the Leicester City team on the night after undergoing groin surgery. With the striker out of the line-up, Leicester City had shot blanks in their three previous matches against Liverpool, Manchester City, and Bournemouth. They took just two points from nine possible. Vardy’s return wasn’t flush with goals as Spurs kept him quiet.

A recurring theme all season long, however, was Leicester City’s ability to get goals when needed from unlikely players. Centre-back Roberth Huth’s 83rd minute header from a Christian Fuchs’s corner gave Leicester City a lead that they didn’t give up. One of the biggest moments of the game came when Kasper Schmeichel tipped Kane’s shot onto the bar to keep Spurs from scoring. It was another brilliant defensive performance against a title rival.

Liverpool outplayed Leicester City on Boxing Day for a 1-0 win. By the time they met less than two months later, Leicester City were top of the table. The first half was cagey with both sides seeing few chances to score.

Leicester City excelled all season long playing long balls for Vardy to run onto and score. The tactic once again worked versus Liverpool as Mahrez played a long ball forward that Vardy ran onto. His 25-yard strike sailed over goalkeeper Simon Mignolet’s head and into the back of the net.

Vardy made a name for himself during the season as a top-flight striker. It was a true breakout campaign and performances like his versus Liverpool made him a household name. Vardy added a second to seal the win in the 71st minutes as Leicester City had the best goalscoring chances to finish out the match.

The game at the Etihad was another statement of intent by Leicester City. The Foxes, as they had done all season long, stepped up when it mattered most. They stunned Manchester City claiming a convincing away win. Leicester City took a first half lead through Huth, who headed home Mahrez’s free-kick. The Algerian, who would join Manchester City in 2018, added a second goal after a brilliant step-over and finish.

Huth added Leicester City’s third goal with a second headed strike. Fuchs’s corner found Huth’s head giving the Foxes a 3-0 lead. Although Manchester City pulled a goal back through Sergio Aguero, it was a minor blip on the scoresheet. Leicester City’s win led fans and pundits to believe the club were on their way to the title.

Just as Leicester City were charging toward the Premier League title, they hit a bump in the road. A matchday 26 loss to Arsenal – their second defeat to the Gunners – rattled nerves at the club. The Gunners and Tottenham still had shots at overtaking Leicester City.

Yet, Norwich City would prove to be the springboard Leicester City needed for the second time. The Foxes were on the verge of dropping points for the second straight game and looked increasingly tired. Just as Leicester City looked set for a draw, Leonardo Ulloa scored in the 89th-minute to claim an undeserving win. The victory gave Leicester City a five-point lead at the top of the table once more.

Following their loss to Arsenal on matchday 26, Leicester City went on a nine-match unbeaten run. Seven of those nine games ended in wins for the Foxes as the title came further into focus. On matchday 36, Leicester City headed north to Old Trafford to play Manchester United.

At the start of the day, Leicester City were three points from the Premier League title. By the end of the night, they were just two points away from winning a first ever league trophy. The Foxes started the game shaky allowing Anthony Martial to score in the eighth minute.

Ranieri’s team once again showed their mental strength by coming back once again. Captain Wes Morgan outmuscled Manchester United’s defence to head the equaliser past goalkeeper David de Gea. It took just nine minutes for Leicester City to get on level terms. They held on from there to move closer to the trophy.

One night after drawing 1-1 with Manchester United, Leicester City’s title rival Tottenham Hotspur visited Stamford Bridge to play Chelsea. Spurs started the match brilliantly scoring twice in the first half thanks to goals from Kane and Heung-min Son. It looked like Tottenham had extended the Premier League title fight, but Chelsea had other ideas.

The season wasn’t great for Chelsea. They finished the campaign in 10th place. On that warm May night, however, Chelsea played the second half like world-beaters. The Blues made a remarkable comeback scoring two goals in the final 32 minutes. It was an unlikely comeback that ended Spurs’ title hopes and made history for Leicester City handing them the title.

Ranieri’s team were 5,000/1 to win the league title at the start of the campaign. They went from being Premier League rejects to being the champions and wrote one of the greatest sporting stories of all-time.