Football is not just a great sport on the pitch. It has also given rise to some incredible quotes over the years. Here is a selection of top 10:

Diego Maradona: “When people succeed, it is because of hard work. Luck has nothing to do with success.” 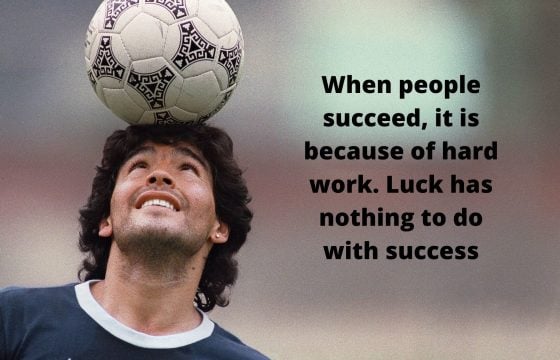 Diego Maradona is easily of the greatest players of all time. He is known for being incredibly talented, but the Argentine famously quoted how hard work was crucial than any other factor. For all his incredible talent, Maradona has labelled hard work as the reason for his success. Whilst it is possible to get a few goals through luck, one does not score several hundred goals like Maradona without working hard.

Lionel Messi – “I always want more. Whether it's a goal, or winning a game, I'm never satisfied.”

Just like Diego Maradona, Lionel Messi has also elevated himself to a position where he is considered as one of the all-time greats. After having won every major trophy with Barcelona, Messi has kept going to new heights. It is clear that the Barcelona forward does not intend on settling with five Ballon d’Or awards or four Champions League titles.

Sir Alex Ferguson – “I’ve never played for a draw in my life.”

Former Manchester United boss Sir Alex Ferguson is an icon in the sport for having transformed the fortunes of the Red Devils. His incredible success with Manchester United came in more than two decades. During this period, he was in charge of the team for an astonishing 1500 matches. Even then, there were only 338 draws and he concluded his United career with an astonishing win ratio of 59.7%. The ability to go for wins rather than draws was highlighted by United’s ability to get so many late goals under Ferguson.

Johan Cruyff –“To win you have to score one more goal than your opponent.”

Dutch icon Johan Cruyff managed to keep fans in a spell during his playing days and his managerial career was no different. The attacking midfielder was able to get an incredible 412 goals in just 514 appearances for the likes of Ajax and Barcelona. The astonishing number of trophies picked up by Cruyff was done so in an entertaining manner. His exemplary desire to score goals was displayed extremely well in this famous quote.

Dennis Bergkamp – “Behind every kick off the ball there has to be a thought.”

Jose Mourinho – “Please don’t call me arrogant, but I’m European champion and I think I’m a special one.”

Former Chelsea and Real Madrid manager Jose Mourinho has emerged as one of the successful names in the sport with numerous trophies to his credit. The Portuguese came to the limelight in 2004 after winning the Champions League with FC Porto. Immediately after the success, Mourinho was asked to take over at Chelsea. In his first press conference as the Chelsea manager, Mourinho stunned the world media with a kind of arrogance that had never been seen before. To his credit, the Portuguese enjoyed an immensely successful time with the blues.

Arsene Wenger – “If you do not believe you can do it, then you have no chance at all.”

Arsene Wenger is regarded as one of the most successful Premier League managers. Yet, he arrived as an unknown from Japanese football in 1996. Over the period of more than two decades with Arsenal, the Frenchman managed to create a revolution at the club. Apart from bringing a new identity to Arsenal, Arsene Wenger also took his chance extremely well and created the famous ‘Invincibles’ team of the 2003-04 season. Few would have imagined that he would have enjoyed such a success after having been a relative unknown in the game.

Paolo Maldini – “If I have to make a tackle then I have already made a mistake.”

Former Italian international Paolo Maldini is regarded as one of the icons of the game. The defender was able to play at the top level well into his 40s. He ended up making more than 600 appearances for AC Milan since his debut in 1984. Despite not being blessed with amazing pace, Maldini was able to keep out opposition for more than two decades. The defender opened up on his secrets by saying that he focuses on timing the intervention rather than specialising in tackling the ball from an opponent.

Jurgen Klopp – “I never succeeded in bringing to the field what was going on in my brain. I had a talent for the first division, and the mind for the Bundesliga.”

Former Borussia Dortmund manager Jurgen Klopp may not have had a successful playing career, but he has been immensely successful as manager after winning multiple honours with Borussia Dortmund and Liverpool. After having won trophies like the Champions League, few will be able to question the managerial skills of the former Mainz 05 player. However, his football skills did leave a lot of to be desired.

Former Barcelona manager Pep Guardiola has been able to inspire several managers and teams with a passing style of football during his time with the Catalan club. Guardiola may have had a successful career as a player, but he has gained more prominence as a manager. While his passing style has captivated many, Guardiola tried to explain the essence of his philosophy in this famous quote. Guardiola’s style of football has been a major challenge to opponents for more than a decade and it has given him an opportunity to lift major honours like the Champions League.