France began life in Group F with a victory over Germany and now they face the team expected to finish bottom of the table, Hungary. Portugal beat Hungary 3-0 last time out but all three goals arrived in the final 10-minutes, so it will be interesting to see how the Hungarian players react in this must-win game.

Read on for our full match preview and prediction for Hungary vs France in the European Championship.

France have won each of their last four encounters with Hungary but the pair haven't locked horns since back in 2005. The French made it five clean sheets in the run with their 1-0 victory over the Germans, while Hungary have failed to score in each of their last two outings.

We're expecting France to score a few goals in this game, given how the Hungary defence collapsed against Portugal. Four of Hungary's last six matches have produced over 2.5 goals, while two of France's last three fixtures have also witnessed at least three goals.

France have secured 3-0 wins in two of their last three outings and their defence hasn't conceded a goal in any of their last five international matches. Hungary have conceded exactly three goals in two of their last six matches, including their opening game of the group stage against Portugal and we're backing them to lose 3-0 against when they face France on Saturday.

Nobody is expecting anything from Hungary in this game but we're going to have a look at some of the markets you can back if you fancy the underdogs in this Euro 2020 clash. If you are looking to back a Hungary win then you can get odds of 13/1 with SBK with a draw at the very same bookmaker, priced at 23/5. Fancy one of the Hungarian players to score first in this game, then look no further than Janos Csaba Hahn whose odds range from 12/1 to 19/1 with various bookmakers.

Hungary gave a good account of themselves in the opening three-quarters of their game against Portugal but did concede a lot of chances. The hosts even looked decent on the counter-attack and thought they had opened the scoring only for the goal to be disallowed for offside. However, Portugal's class shone through in the end, as Ronaldo and co. produced three goals in the final 10-minutes to secure a comfortable victory. It was always going to be difficult for Hungary to progress from the so-called ‘group of death' and this heavy defeat has really limited their already slim chances.

France secured a 1-0 win over Germany in Munich and probably could and should have won the game by a greater margin. The Germans offered very little in the final third and might even struggle to get out of the group as they have to face a confident-looking Portugal side next. France may well go with the same starting line-up against Hungary as all of their players put in a good performance in the opening game. France will control the game against Hungary and if they have their shooting boots on and get an early goal, then this could even end up being the highest-scoring game of the tournament. 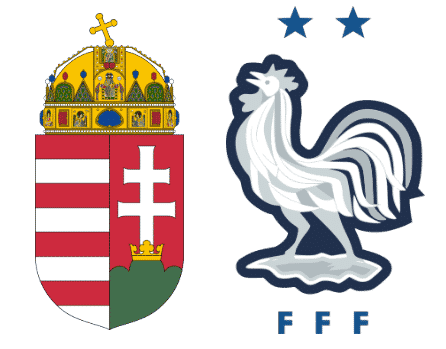