Huddersfield still have an outside shot at making the top two but will need to win all their remaining games to have any chance of doing so. Will they take maximum points here? Find out with our Coventry vs Huddersfield match preview with free tips, predictions and odds mentioned along the way.

Huddersfield to keep up heat on top two

Coventry have done okay of late but their form is hardly amazing with two wins, two defeats and a draw from their last five games. Huddersfield meanwhile have been in sparkling form; they've taken 13 points from the last 15 they've had available. It is for that reason – and the fact that they have something tangible to play for – that we fancy the Terriers to win this game.

Terriers to keep it clean

Here are the key stats & form guide for Coventry vs Huddersfield

Coventry vs Huddersfield: Let's look at the predicted lineups

Coventry might be as good as done in their hunt for the top six with it likely to become a mathematical impossibility with them over the weekend. Huddersfield though will be in the playoffs and, if things go their way, they could sneak an automatic promotion spot!

Coventry haven't actually been in horrendous form of late but they've just struggled for any consistency for too long now. As such, their playoff aspirations went up in smoke a long time ago for anyone with a realistic outlook. Can they Sky Blues at least give their fans something to cheer about here?

Huddersfield have been quietly going about their business this season and are guaranteed of a top six finish. It's a long shot but the top two hasn't gone yet. All the Terriers can do is win their remaining games knowing that maximises their chance on capitalising on any slip ups above and ensures the enter the playoffs with momentum on their side.

A quickfire FAQ on Coventry vs Huddersfield 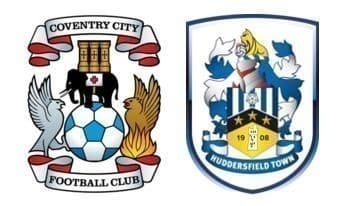