Marcelo Bielsa guided Leeds United to the Championship title last season and in so doing, restored The Whites to the top flight of English football for the first time in 16-years. Bielsa started his managerial career at the same club he began his playing career, Newell's Old Boys in Argentina, and made his name as a coach by guiding the club to the Primeira Division title in 1991. Following a trophyless spell in Mexico, Bielsa returned to his native country and claimed a second Primeira Division title with Velez Sarsfield which earned his a move to Europe with La Liga side Espanyol.

His time in Barcelona was brief due to the Bielsa being offered another job, one he could simply not turn down, the Argentine national team. Bielsa had a win ratio of 61.8% during his 6-year spell as the national team coach where, in 2004, he guided the side to a Summer Olympics Gold Medal and finished runners-up in the Copa America. However, Bielsa's most famous, or should I say infamous, game in charge of Argentina arrived in the 1999 Copa America against Colombia when striker Martin Palermo missed three penalties, Bielsa was sent to the stands, and Colombia claimed a 3-0 victory.

After a spell as the Chile national team manager, Bielsa moved to Athletic Bilboa where the Argentine came close to securing more trophies as his side finished runners-up in the Europa League and the Copa del Rey during the 2011/12 campaign. Bielsa's stock began to fall after disappointing spells in charge of Marseille and Lille, but sandwiched between them was his bizarre 2-day reign at Lazio. Bielsa took charge at the Serie A side on the 6th July 2016 but left on the 8th July due to the club failing to sign the players he had asked for.

How you can play like Bielsa's Leeds in Football Manager 2020

Bielsa might not have won any major trophies in his career so far but his influence on the modern era of football in terms of his philosophy and tactics cannot be denied. Pep Guardiola, Diego Simone and Mauricio Pochettino have all been influenced by Bielsa's style of play, with the Machester City manager describing the Argentine as the best coach in the world.

The 3-3-3-1 is Bielsa's signature tactic, honed during his time in charge of Argentina and Chile. The formation allows for quick transition from back to front with players needing high levels of work rate and concentration to allow the tactic to work. Like with most modern formations, the tactic changes when the team is in possession compared to when it is without the ball and this is drilled into the players over time.

There are a number of Bielsa style tactics available for download on FM20 but ‘El loco' 41221 by RDF is perhaps the nearest to the genuine article. The below image shows how Leeds United often lined up under the guidance of Bielsa in 2019 and it is important to note that the three at the back was often made up using Kalvin Phillips in the key role of a ‘Half-Back', a defensive midfielder that slips into the defence when his team are without the ball and starts attacking moves when his team regain possession. 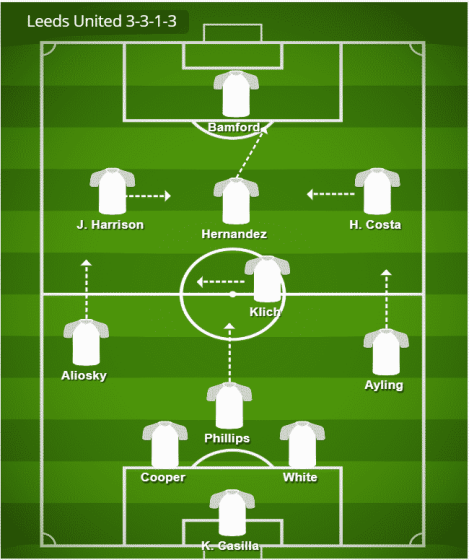 This next image is taken from RDF's ‘El loco' tactic for Football Manager 2020 and although it isn't an exact match up, you can see how the Bielsa 3-3-1-3 shape has been adopted. 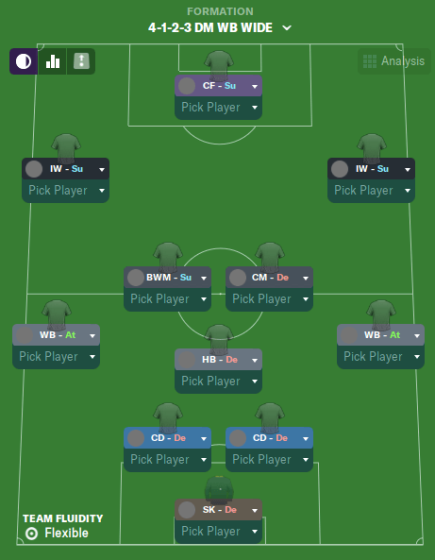 The half-back role is said to be key to this formation as the selected player will be expected to dictate the tempo of play, but will also need to be well adept at defending as he will slot into the backline to form the famous three-pronged defence.

The wing-backs will need as good going forward as they are in defence and have plenty of stamina due to them having to overlap the inverted wingers and supply crosses into the front men.

The inverted wingers will need to be decent finishers as they will move infield to support the lone striker and take on some of the goalscoring burden.

A complete forward would be most suited to the lone striker role as he will be expected to create chances for the inverted wingers, as well as any central midfielders that join the attack, and will likely provide the main source of goals.

In Possession: Pass into Space (can be changed to Work Ball into Box if chances aren't being converted), Play Out of Defence, Be More Expressive, Overlap Left, Overlap Right.

Out of Possession: Defend Narrower, Higher Defensive Line, Much Higher Line of Engagement, Extremely Urgent, Get Stuck In, Use Offside Trap.

Key Stats for Each Position

The fundamental ideas that have made this tactic successful for Bielsa are the high press, as the Argentine likes his teams to defend from the front, and flexibility, the idea of one formation when in possession of the ball and one when you are trying to get it back needs the wing-backs to quickly get back into a defensive system as soon as the opposition has taken control of the ball.

RDF's ‘El loco' tactic for FM20 certainly takes on the familiar shape of Bielsa's Leeds as well as their high pressing style and flexible transition from defence to attack, and you can download this formation on fmscout.com. Hopefully, any FM20 players looking to create their own tactic based on Bielsa's style and philosophy at Leeds United will have found enough in this article to create something worthy and most importantly, successful.