20-years ago, fans of the current Football Manager series were playing Championship Manager Season 01/02 but little did they know, they were arguably playing the most popular installment in the history of the game.

CM 01/02, as it is referred to, hit the stores back in October 2001 and allowed players to take control of clubs from 27 countries across the globe and is still, amazingly, being played today by hardcore fans and each season modders create an updated database for a game that is two decades old. Some may argue that this particular installment of the series was so popular because it was easy to master than any other game in the franchise due to a particular formation and a selection of what are often referred to as ‘cheat' players.

Personally, I have fantastic memories of all the Football Manager games since I first started my adventure with CM 97/98 (also still available to play using a DOS emulator), but CM 01/02 takes centre stage. We're going to take a look at the infamous 4-1-3-2 tactic and some of those ‘cheat' players that made us fans fall in love with CM 01/02 in what should be a trip down memory lane for those fans that remember this game with fondness.

CM 01/02 introduced the EU regulated transfer system for the first time in the series and also included ‘attribute masking' for the very first time (never liked this feature myself). For the first time managers were able to send their players for surgery and they added improvements to the interaction with the board and the media. The K-League in South Korea was added to the list of possible leagues to manage in, but only the top-flight. CM 01/02 sold over 300k copies in the UK alone and I can still remember the excitement of the first day and waiting for the game to install, oh happy days! 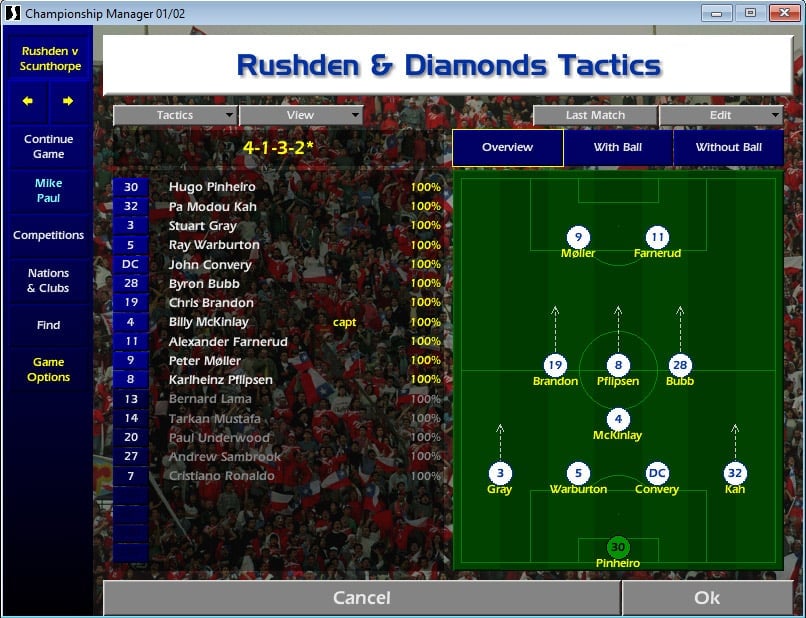 It wasn't long after the release of CM 01/02 that players began to realise just how good one particular formation worked in this installment of the franchise. The formation in question was 4-1-3-2, which was located at the very bottom of the formations list within the tactics screen. Whilst your team might not keep a lot of clean sheets using this very aggressive and attacking tactic, it would score plenty of goals, if you had the right players, and would provide the basis for a very successive save.

The set instructions with this tactic are as follows…

Men Behind Ball: No

Due to the high amount of red cards you get when playing with these standard settings, many players opted to lower the tackling to ‘normal' and often increased the mentality to ‘attacking' to keep their team on the front foot. There were plenty of other formations in the game that could bring you success, as well as ones you could create yourself, but none really compared to the 4-1-3-2. 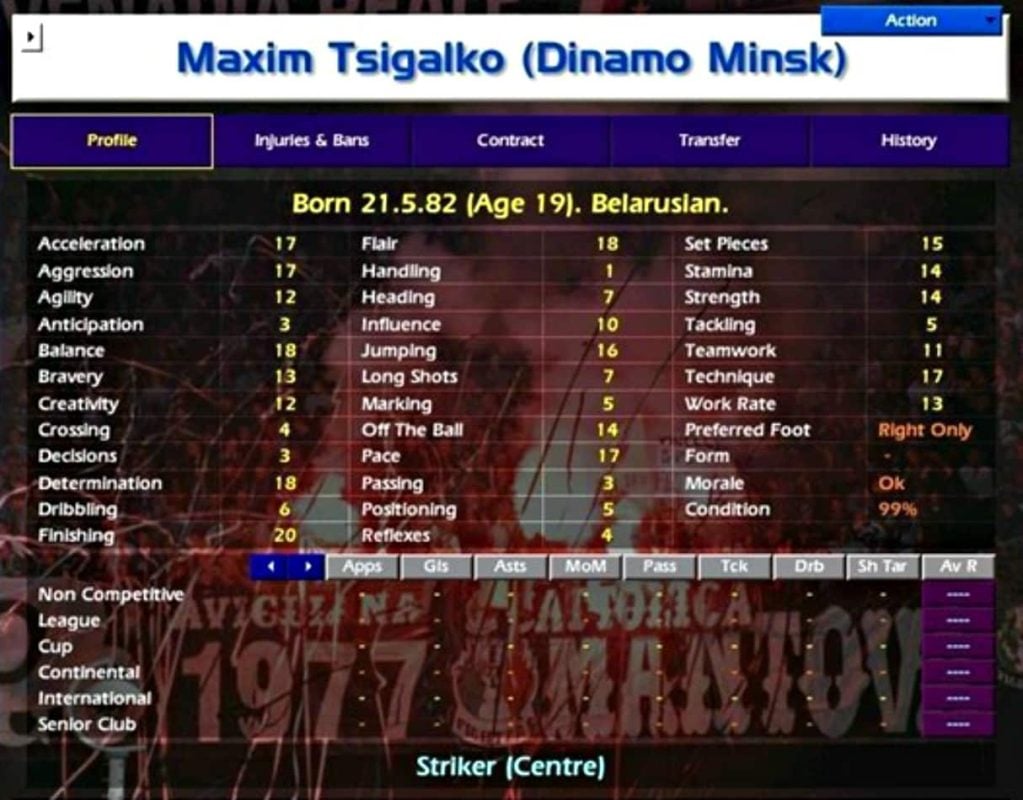 Now, not all of the players we're about to talk about can be called ‘cheat' players, in fact, hardly any of them can. Instead, we should just refer to the majority of them as the players who have excellent potential, are often available cheap, and tend to produce goods as soon as you sign them. The only player I would actually consider a true ‘cheat' player is Portugal's own, To Madeira. This 22-year-old striker is available at the start of each save for a small fee and will score you goals at whatever level he plays at. However, the main issue with Madeira is that he isn't a real player and was, in fact, created by one of the games scouts, and this is why he deserves the title of a ‘cheat' player.

Sticking with strikers, Maxim Tsigalko or Maksim Tsyhalka as he is actually called, is one of the best strikers in CM 01/02 and he might even be my favourite ever player in the entire franchise (once found a guy called Leo Bing, a Norwegian that could play every position but goalkeeper and was stacked with 20s but I think he was a regen as I've never seen him since and neither has the internet). Tsigalko is 18 when you begin your save and, due to his lack of international caps for Belarus, he can be tricky to sign for a Premier League club but if you can bring him in he will guaranty goals and develop very quickly. Maxim's real-life career never lived up to his in-game ability and sadly he passed away in 2020 but his mark on CM 01/02 players will always be remembered.

Kennedy Bakircioglu could play CM/RW/AM/FC but in the tried and tested 4-1-3-2, I enjoyed suing him as a CM as he scored plenty of goals and created even more, and eventually, he develops into one of the best midfielders in the game. Another creative force for your midfield would have to be Mark Kerr who you can sign from Falkirk for a nominal fee and he would create so many goals and help keep possession for your side. In terms of adding a ball winner into your side, you need look no further than Egypt's Ibrahim Said. The young DM pops up with the odd goal but his true skill is breaking up opponents attacks and allowing the three creative midfielders ahead of him take all the glory. 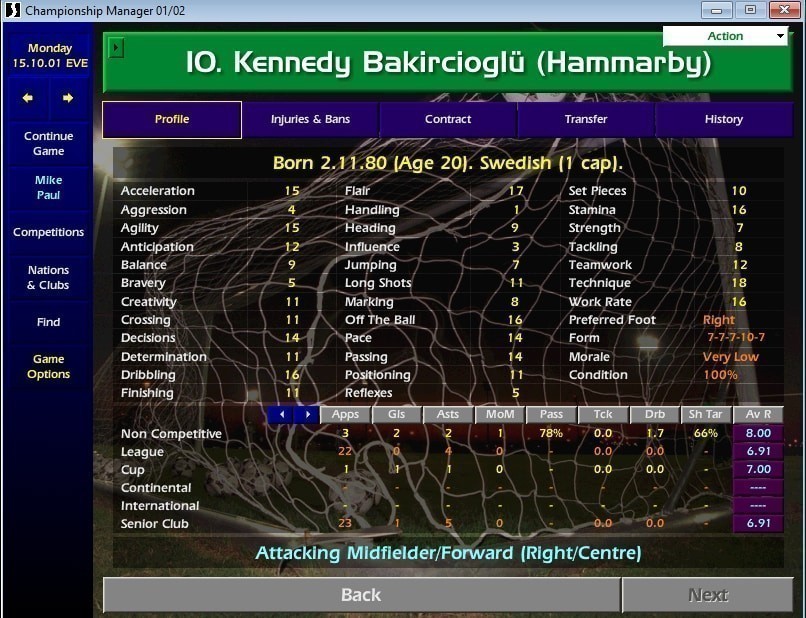 Need a RB, LB or CB? then Isaac Okoronkwo is your man! The Shakhtar defender can play anywhere across the backline and is either footed. He's a Nigerian international and you can sign him for around £1m and his performances will never drop below a 7/10, Mr Consistancy. If you are searching for a young goalkeeper that can be the best in the world, then Franco Costanzo is up there. The young Argentine shot-stopper plays for River Plate and already has a bunch of 20s in his stats when you start your save.

I can't really end without a quick mention of Tonton Zola Moukoko and Cherno Samba, two very young teenagers playing in England at the start of the game that have tons of potential and have become CM 01/02 legends amongst the community. Obviously, there are loads more ‘cheat' players out there but this was just a quick glimpse back at some of the most memorable.

There is still a large community, including myself, that play CM 01/02 for the sheer joy and nostalgia and you can find these very friendly and helpful fans of the game online, along with loads of databases that are continuously updated every year so you can play CM 01/02 anyway you like and I could see this game still being played in another 20-years time.