The name Maxim Tsigalko might not ring any bells to football fans or even Football Manager players of a certain age, but those who are old enough to have played Championship Manager 01/02 know him as one of the greatest strikers in the history of the franchise. Maxim, real name Maksim Tsyhalka, sadly passed away at the end of 2020 aged just 37 and amazingly he is one of the few professional football players that is remembered more for his imitation in a popular videogame than he is for his actual football career, and this lad could play!

Maxim shot to fame amongst the Football Manager community in 2001 when he first appeared in CM 01/02 as a young talented striker at the Belarussian side, Dinamo Minsk. Right from the off, those who stumbled across Maxim knew they were onto something special as the 19-year-old started off with some fantastic statistics. With finishing of 20, determination of 18, balance of 18, acceleration of 17, flair of 18, pace of 17 and technique of 17, this teenage superstar proved well worth buying early in the game, and he was available for just around £1m. 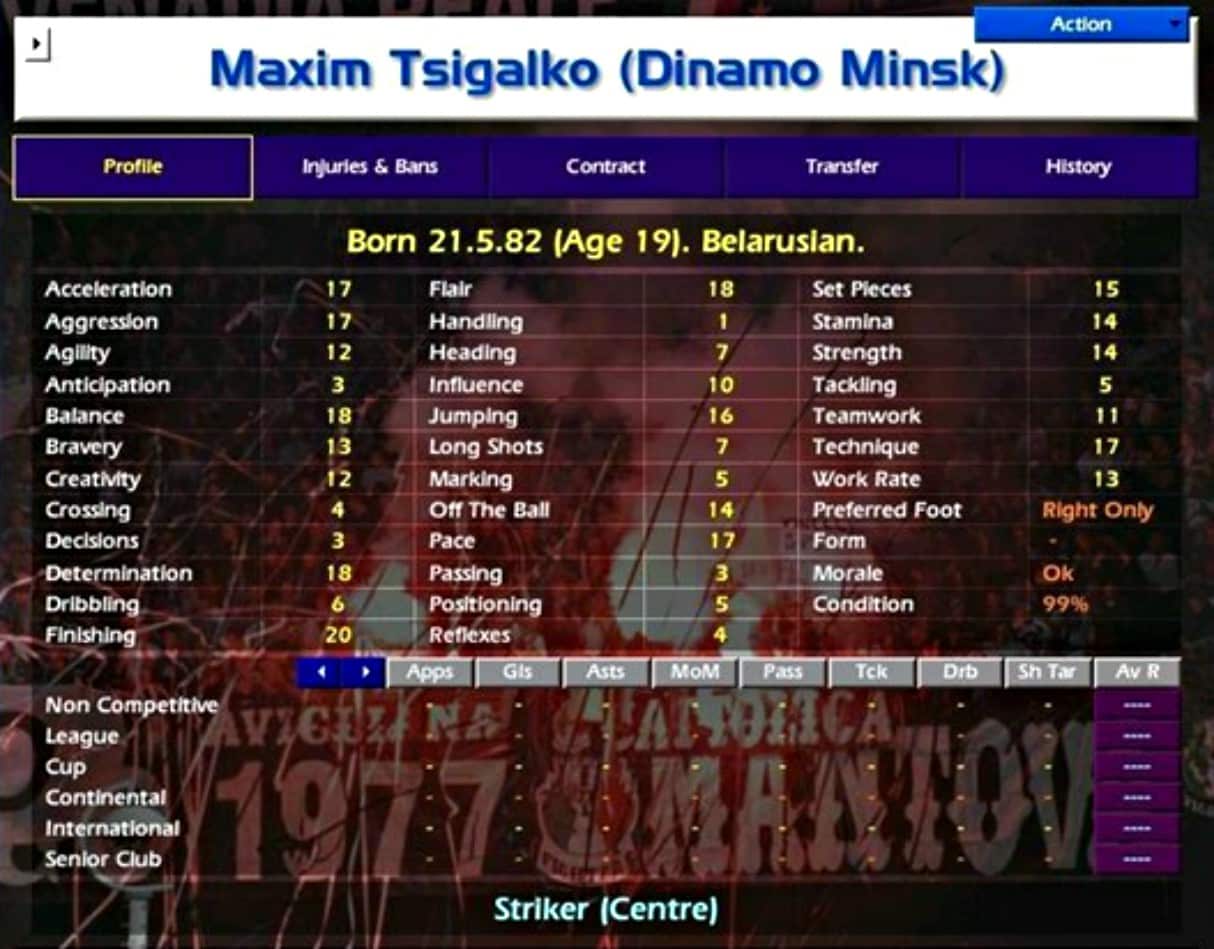 Players up and down the country soon cottoned on to Maxim and just how good of a striker he was, but they might not have realised just how much he could develop. Players scoring more goals than games is rare unless you are Ronaldo or Messi, but Maxim Tsigalko was doing it way before those lads (just not in the real world). Regularly players would share their stories of Maxim with other fans of the franchise and even produce photos to prove they weren't being dishonest. I had heard stories of Maxim scoring over 100-goals in a season for some players, though I never experienced that myself and didn't believe the tales until I saw this photo. 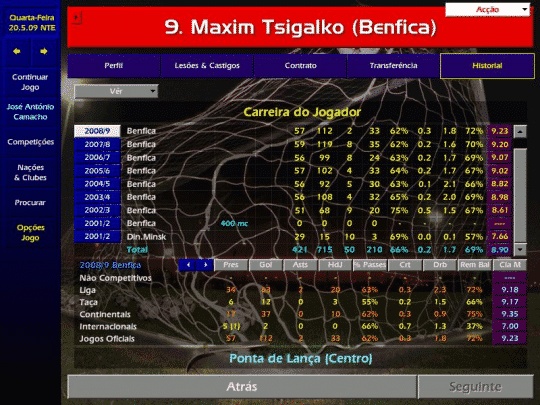 When Maxim reached his full potential, around the age of 25, his stats were better than every single striker's in the game. Maxim had 20s for Acceleration, Creativity, Finishing, Off the Ball, Pace and Technique, not to mention 18s and 19s for Agility, Balance, Determination, Flair, Influence and Jumping. He scored goals aplenty for club and country, never letting down a single Football Manager player. Some players still play CM01/02 simply to manager Maxim and dominate European football, thus was the power of this unknown striker from Eastern Europe.

A certain Antonio Poutillo was given the responsibility of choosing the stats for Belarus players in CM 01/02 and he stated, in an interview with Gazzetta, that it was no accident that Maxim was a star prospect in the game.

“I believed football in Belarus has a future…. I loved Tsyhalka very much. He was quick, had a sense of goal, and in the small classes, he shone…. I put him in a high degree of reputation (so that he would be loaded up into almost all databases)”

Poutillo wasn't lying, Maxim was a great prospect in Belarus and even went on to score for his country at senior level. Maxim made his senior debut for Dinamo Minsk in 2001 and played for the club through to 2005, scoring 24 league goals in 53 matches. Maxim moved to Naftan Novopolotsk, Kaisar, Banants and Savit Mogilev but injuries halted his development and the goals soon dried up, causing the player to retire from the game aged just 26.

Maxim received some money from football but ended up working as a construction builder for just $20 a day, but the heavy lifting caused the former international footballer serious health issues. Tsigalko didn't know how popular he was on CM 01/02 until it was too late, he had hoped to have made some money from his fame but he wasn't negative about it.

“I first learned about how good I was at the game when a Russian journalist told me so, and I was really shocked. He told me that I am the most popular footballer in the game… I didn't know the game existed, so I just laughed. Later on, I realized that I could gain much money off it, but it was too late.”

Maxim Tsigalko's one and only international goal in two appearances for Belarus came against Uzbekistan in a 2003 friendly that ended in a 2-2 draw. Maxim did pick up some honours during his career, claiming the 2004 Belarusian Premier League title and the 2003 Belarusian Cup. Following the news of his untimely passing on the 25th December 2020, floods of tribute videos were posted online, with all coming from fans of the Football Manager series that remember Maxim Tsigalko with such fond memories. Even established newspapers like The Sun and The Express released stories on the player's passing, commenting on his fame in the popular football management simulator, which just showed how far his legacy had spread.

Will There Be Another Maxim Tsigalko?

The short answer is, no. The Football Manager series has come on a long way, especially how they do their scouting, so for there to be, what we in the game used to call a “cheat player”, a player at the start of any Football Manager game with the kind of reputation, instant ability and potential of Maxim Tsigalko without the football world having prior knowledge of the player is impossible. Don't get me wrong, there are plenty of players dubbed “wonderkids” in FM21 that many of us regular football fans won't have heard of but they have all been scouted and won't all necessarily become legends in the game itself. What about Regens? you might ask. Well, regens aren't in the game from the start and they aren't real players obviously so they don't count, but I will admit to having discovered a few Maxim-style regens in FM21. However, none have or will ever take the place of the Belarusian striker that you could buy for £1m with most clubs that would guarantee goals.

If you fancy signing Maxim Tsigalko but don't own Championship Manager 01/02, the game is available to download for free, legally, at FM Scout. I'd recommend doing this and making your own Maxim Tsigalko memories.