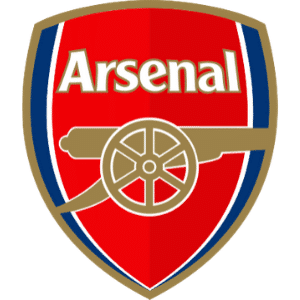 Formed in 1886 as Dial Square by Woolwich munitions workers, the club we now know as Arsenal crossed the city of London to Arsenal Stadium in Highbury in 1913, in doing so becoming rivals of Tottenham Hotspur. Currently playing in the Premier League, Arsenal are managed by Mikel Arteta and are considered one of the most successful clubs in English football. In total, they have won the English top-flight on 13 occasions, the FA Cup a record 13 times, the League Cup (2), Community Shield (15), UEFA Cup Winners' Cup and Inter-Cities Fairs Cup.

This club is one of the few that have been a part of the Premier League in all seasons since the league’s inception in 1992. It is also one of the 7 clubs that managed to win the Premier League so far. Arsenal FC holds many records but the most impressive one is probably the undefeated season in 2002-2003.

After spending nearly a century playing their games at Highbury, Arsenal moved to their newly built Emirates Stadium in 2006. The current club manager is Mikel Arteta, a Spaniard who played 5 seasons for the club and previously worked as an assistant to the legendary manager Pep Guardiola.

Check our website to learn more about Arsenal transfer news and stay up to date with the latest transfer rumours and gossip.

Pierre Emerick Aubameyang from Borussia Dortmund for £57.4m in 2017

This is one of the most expensive transfers in the history of the club but one that is seemingly paid off. While Arsenal had little success so far with the Gabonian striker in the club, the individual performances of the man who earned the captaincy at Emirates have been stellar.

Being the most expensive transfer in Arsenal’s history, the arrival of the French winger from Lille was anticipated with great hope. And while his career with the Gunners is still in its infancy, Pépé could end up being a very expensive flop or at best a solid starter but hardly a difference-maker the Gunners hoped he can be.

While the price of £11m was not really cheap back in 1999, hardly anyone could expect that the French striker who struggled in Juventus could turn into one of the greatest Gunners in history. But Henry did exactly that – with 226 goals, he is the team’s best goalscorer of all time and an overall legend of the club.

Brought to the club for a fee of just £2.5 million, Ian Wright had no trouble adjusting to life in English football since he came from another English club. He spent seven seasons in Arsenal and is still the club’s second leading scorer with 185 goals in all competitions.

The Dutch virtuoso took some time to adjust to the Premier League and the physicality of English football but once he got used to it, he showed his goalscoring and playmaking talent during 11 seasons at the club.

After he arrived at Arsenal in 1996, the French international quickly become one of the most important players in Wenger’s team. He was a key part of the team for a decade and one of the main contributors to the team’s undefeated season in 2002-2003.