In 2007, Brazil’s 1970 World Cup-winning team was voted the best of all-time. The team featured some of the greatest footballers to ever grace the pitch including Pele, Carlos Alberto, Jairzinho, and Tostao. Whenever the World Cup rolls around today, it is the smooth, silky 1970 Brazilian World Cup team that every football fan wants to see when the Selecao take to the pitch. Unfortunately, the more and more football moves away from that iconic World Cup tournament and the game evolves, it is unlikely that a similar team will ever be seen again.

Brazil’s 1970 World Cup team were just one of the incredible elements that made up the tournament in Mexico. Now, half a century on from that epic tournament, it is still talked about in fond reverence. There are a number of reasons the 1970 World Cup stands the test of time as the best in history, and it isn’t just because of that Brazilian team. 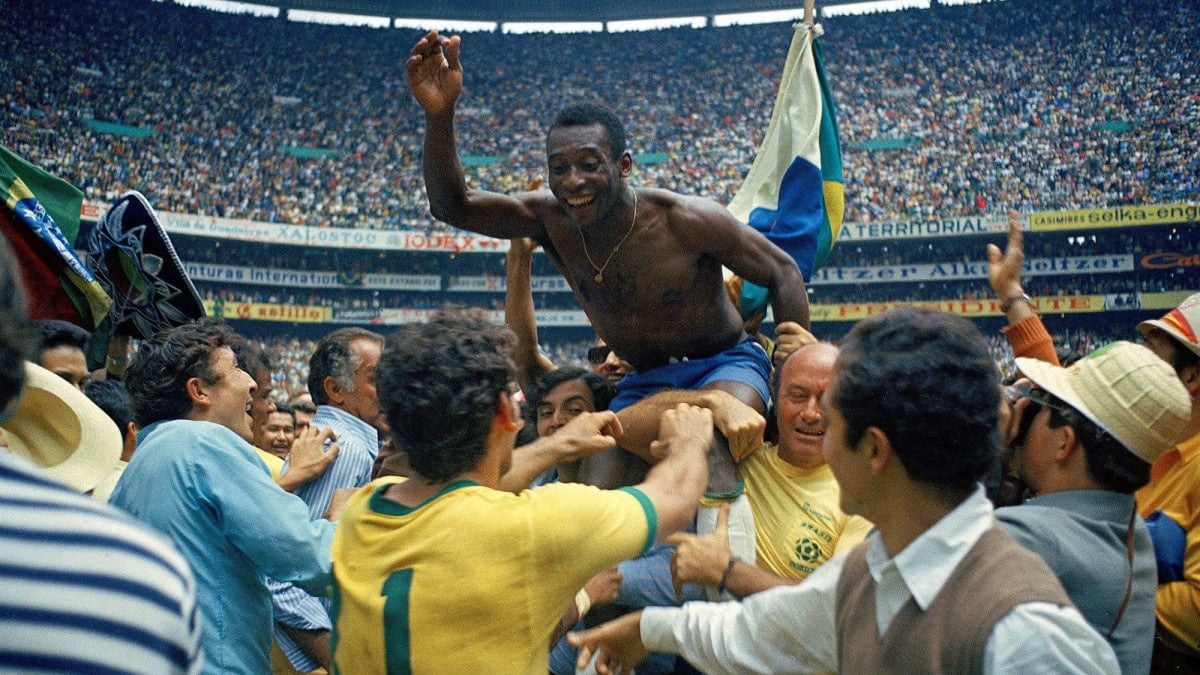 Never before had a World Cup been broadcast to the entire world. In 1970, the tournament was made available for the first time to fans to watch on their televisions back home in real-time. The competition was also significant as it was the first to be held outside of Europe or South American. Mexico’s hosting of the event – a North American nation – showed that football was more than just a sport played in Europe and South America. It was that blueprint that helped counties such as the United States, South Africa, and South Korean and Japan be awarded the greatest international sporting event on Earth years later.

The 1970 World Cup gave fans a number of innovations still seen in modern football. It also gave us some incredible matches and players that have not been forgotten. The 1970 World Cup was only four years on from England’s 1966 triumph on home soil. However, the Mexico edition of the tournament looked lightyears ahead then and now. It is difficult to believe the two tournaments were just four years apart.

The 1954 World Cup was officially the first to be broadcast to fans. Broadcasting the games enabled supporters to follow the action and see their beloved national teams fight for the big prize in international football. It wasn’t until the 1970 event that the tournament was broadcast on a global scale, however. The games were also shown in colour, something that most kids these days simply take for granted. In the early days of World Cup’s broadcasts, fans saw World Cup highlights days after the matches had been played. In some cases, broadcasts of games simply omitted the opening 45 minutes.

For fans in Europe, the matches, which were played during the hot Mexican days, were beamed down via satellite to homes across the continent in the late afternoon or evening. Unfortunately for the players, some games had to kick off at 12:00 PM local time to accommodate fans in Europe. In spite of the colour television innovation, the pictures of the games shown on televisions in Europe were not great. Mexican television used a different system (525-line NTSC). The live feed went through a conversion process resulting in poor picture quality. Fortunately for fans, the football distracted them from the actual images beamed into their homes.

Television wasn’t the only area that saw innovation at the 1970 World Cup in Mexico. The tournament saw two major innovations that are staples of modern football. The first match innovation was the handing out of penalty cards. The use of yellow and red cards had never implemented before. English referee Ken Aston had come up with the idea driving through London and pitched it to FIFA. Previously, referees simply told players they were cautioned. However, two reasons led to cards being instituted and used from the 1970 World Cup onward.

Cards allowed fans on television and in stadiums to understand what was occurring on the pitch. In addition, cards reduced the confusion created by language barriers. Language was rarely a problem at the time for domestic leagues, but at the international level, referees, coaches, and players struggled to communicate. Yellow and red cards fixed this issue. USSR player Lovchev was the first player in World Cup history to receive a yellow card. It occurred in the tournament’s opening match on March 31.

Another innovation to gameplay was the introduction of substitutes. Football was a sport in which players had to play a full 90 minutes regardless of fatigue or tactics. Although substitutes for injured players were allowed prior to the World Cup in Mexico, FIFA allowed teams to make tactical changes in 1970 for the first time.

USSR player Anatoly Puzach was the first substitute in World Cup history after he replaced Serebrannikov in the tournament’s first game. A few days later, Mexico’s Juan Basaguren became the first substitute to score a goal in a match. He tallied a strike versus El Salvador.

On the pitch, the 1970 World Cup featured some of the greatest players to ever play football. Legendary footballers such as Franz Beckenbauer, Gerd Muller, Bobby Moore, Gordon Banks, and, of course, Pele were all on hand for the tournament.

Colour broadcasts allowed fans to see players like never before. For the first time, fans could see Brazil’s yellow shirts or Germany’s classic white strip. Seeing the greats in colour for the first time was a watershed moment.

West Germany’s Muller and Brazil’s Jairzinho spent the tournament battling it out for the Golden Boot Award. Although Pele was considered the best in the world by many, by 1970, he was nearing the end of his international career. Pele would play just four more seasons in Brazil for Santos. In 1975, he was lured to the United States to play for the New York Cosmos in the North American Soccer League. His influence was still great and it was the 1970 edition of the tournament that made Pele a worldwide phenomenon.

Four years earlier in England, Pele had had a miserable tournament due to injuries. Almost left out of the Brazilian national team in Mexico, Pele excelled giving a majority of fans watching on television their first glimpses of him. Pele’s global celebrity following the tournament is what ultimately led New York Cosmos signing him at all costs.

Muller stole the goalscoring show, however. He bagged 10 goals as West Germany reached the semifinals. His two goals in the semifinal versus Italy weren’t enough as the Azzurri won in extra-time to reach the final. There, Brazil overpowered a fatigued Italian team with goals from Pele, Gerson, Jairzinho, and Carlos Alberto

The most iconic ball 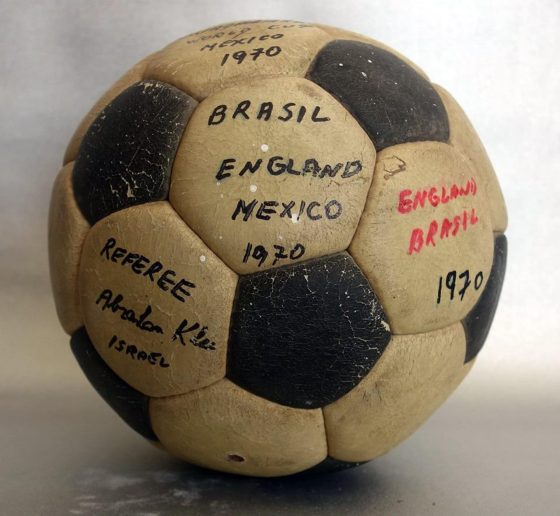 For any child that grew up in the 1970s, 1980s, and 1990s that played football, it is likely that the only ball available to play with was a black and white one. Footballs were black and white for decades, yet they weren’t always that colour.

Footballs had been bleached white for years prior to 1970. However, as more games were available to watch on television, fans had greater difficulty following the ball. Adidas sought to make the ball easier to see on black and white TVs. The German sportswear manufacturer added 12 black pentagons to the ball creating a look that would last for much of the next three decades.

The Adidas Telstar ball looked light years ahead of the ball used four years earlier in England. The 1966 World Cup sported an orange ball produced by Slazenger. Telestar looked like a football from years into the future and not just four years removed from Slazenger’s model. Although footballs have been designed using a variety of colourways and stitching since, no football has lived in the annals of the game like the Adidas Telstar.

Remarkably Adidas only sent 20 Telstar balls to Mexico for the tournament. The German company, for whatever reason, believed that just 20 balls would be needed for the biggest international tournament in the world of football. Due to a lack of balls for games, alternatives were needed. England’s quarterfinal match versus West Germany saw the teams play with a brown ball. Italy’s semifinal against Italy saw an all-white ball used in the first half.

The Game of the Century

Brazil may have won the World Cup defeating Italy in the final but it was the Azzurri’s semifinal match versus West Germany that went down in history as The Game of the Century. Played at the iconic Azteca Stadium in Mexico City, the match was a seven-goal thriller. Five of the seven-goal were scored in extra-time as the two teams fought for a chance to play in the final.

West Germany and Italy were giants of international football, and both had their eyes on the prize of winning the trophy. Italy opened the scoring through Roberto Boninsegna in the eighth minute and looked to hold on to their lead with a locked tight defence. West Germany struggled to breakdown the Italians until the stoppage time in the second half. Karl-Heinz Schnellinger finally equalised in the second minute of stoppage-time. In extra-time, the drama would only increase.

Muller found the back of the net in the 94th minute with Tarcisio Burgnich equalising on 98 minutes. Gigi Riva put Italy back in front but it didn’t last long. West Germany’s Muller levelled the scores again. Gianni Rivera needed just one minute after the restart to put Italy back on top. It was a lead the Azzurri wouldn’t relent this time as they claimed a 4-3 win.

The semifinal lasted two hours and was played in the hot Mexican afternoon sun. Compared to modern football, the game was played at a time of the day that wasn’t beneficial to the players on the pitch. Rather it allowed fans back in Europe to watch the game live on television.

The Game of the Century was played at the Azteca Stadium, an imposing venue opened in 1966. Since the 1970 World Cup tournament, the Azteca has been regarded as one of the greatest stadiums in the world.

The stadium is an imposing structure with steep vertical stands. It sits 7,350 feet above sea level giving the Mexican national team a home advantage. At the 1970 World Cup, teams that weren’t Mexico did not have an advantage playing at the stadium.

The Azteca was designed for big games. Its atmosphere was incredible especially when its original capacity of over 107,000 fans packed the stadium. By the time the World Cup returned to Mexico 16 years later, the venue had been expanded to 114,600. At both World Cups, the Azteca sold out regularly as fans packed it for the games.

The FIFA marketing machine gets started

Today, FIFA’s marketing arm is a massive entity that brings in large sums of money. Adidas and Panini were the catalysts to FIFA focusing on marketing. Thanks to the 1970 World Cup being more widely seen by fans around the world, the tournament’s commercial appeal grew exponentially.

FIFA’s marketing would improve over the next few decades. Former FIFA president Joao Havelange once said of his presidency, which began in 1974: “When I took over, there were $20 in the safe. When I left, there was more than $4 billion dollars.” FIFA learned from the 1970 tournament and soon marketed the World Cup like never before.

The 1970 World Cup did a lot for the world of football. The tournament’s successes weren’t just on the pitch as many items ubiquitous with modern football began in Mexico a half-century ago.