A wonderkid winger can be hard to find. Which is why when a talented young wideman comes along there is usually a transfer scramble in order to secure their signing.

Think of how many sides were chasing Eden Hazard back in the summer of 2012 before he opted to join Chelsea. Or the mounting interest in Borussia Dortmund's Jadon Sancho.

It is on different on Football Manager 2019. There are a number of young wingers who will pique the attention of Europe's top clubs. It will be down to you to ensure you beat them to the punch.

And that's why we're here to help. We have already picked out the best wonderkid goalkeepers, wonderkid defenders and wonderkid midfielders in this year's edition.

Now it is the turn of the wonderkid wingers… 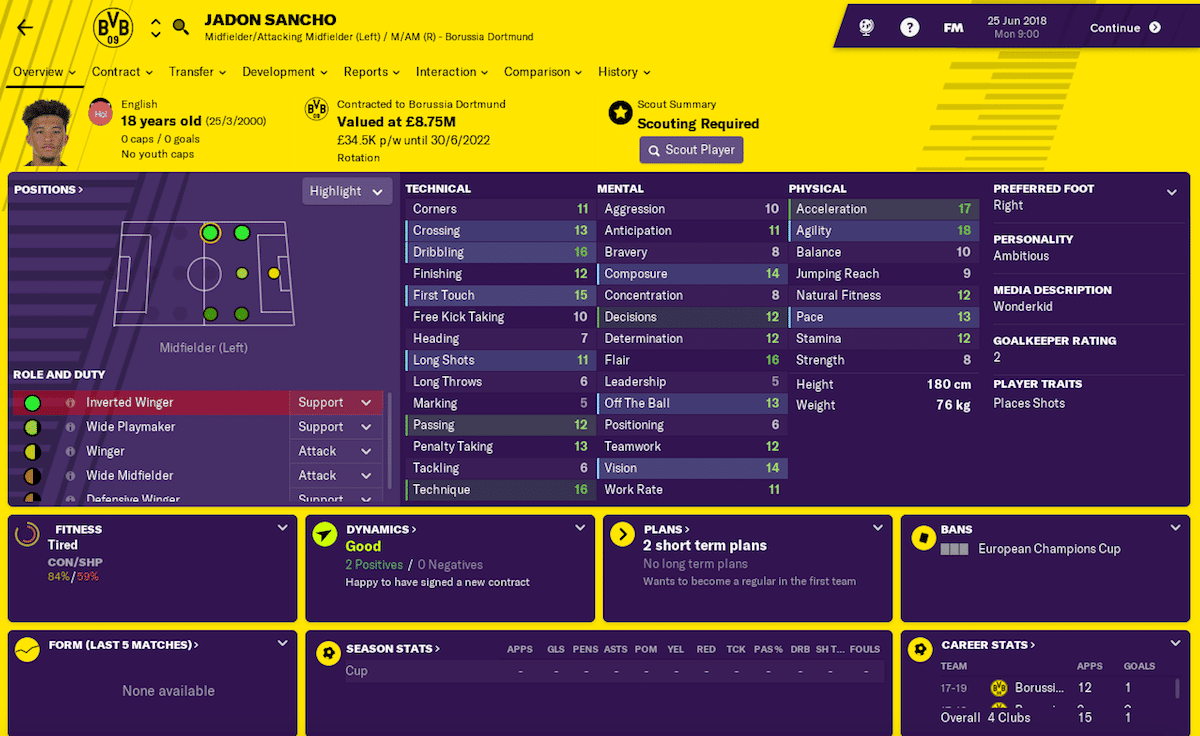 The world's most famous wonderkid? Perhaps.

The former Manchester City youngster left English football for Borussia Dortmund in the summer of 2017 in the hope of playing regular first-team football. Fast forward 12 months and it's proved a very wise decision.

Sancho is regarded as one of the most exciting young players in Europe and his incredible form this season – as discussed here – has seen him made his England debut at just 18 years old.

There will be, understandably, many an FM manager who wants to bring Sancho to their club. But it will come at a big price.

BVB will demand over £100million for the 18-year-old and his agent will want a big contract in addition to several promises being met if he is to leave the Bundesliga.

The young Turk was signed by Roma to replace Mo Salah in the summer of 2017 and his first season in Italy was impressive; he struck eight goals in 32 appearances and claimed two assists.

That form established him as one of the most exciting young wingers in Europe, yet he still has plenty of room to improve.

Roma are a selling club and that is no different on FM19. They are will to let Ünder leave for a deal worth around £60million.

His wage demands of around £90,000 a week are not earth-shattering but it will cost you another £6million in fees to get a contract agreed. 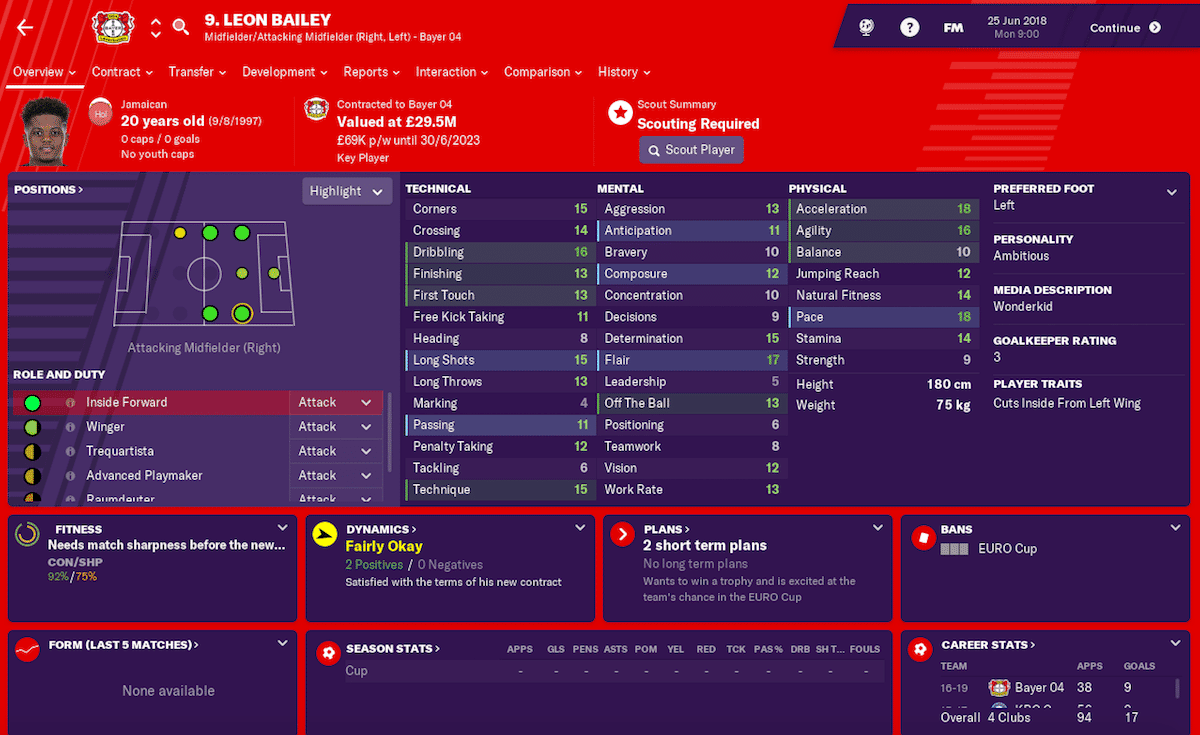 The Jamaican is regarded as one of the exciting young wingers in world football and the fee it will cost you to prise him away from Bayer Leverkusen reflects that.

The German club will want around £80million for Bailey and his wage demands of over £150,000 a week mean you are only likely to convince him to sign for your club if it has deep pockets.

But given Bailey is already capable of shining for a top European side – and he's only going to get better – you may decide to stump up the cash required to sign him. 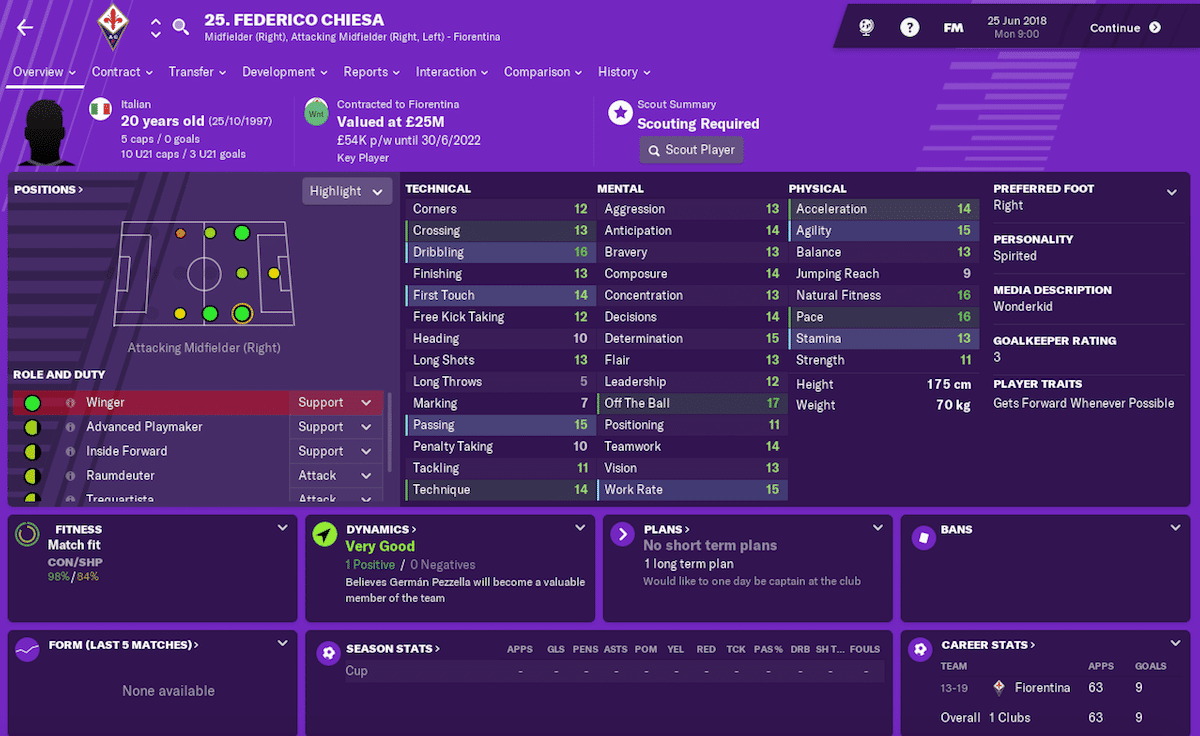 The son of Italian legend Enrico, Chiesa had big footsteps to follow in Serie A. But instead of being overawed by the prospect, the winger has thrived.

He has developed a reputation as one of the most exciting wide players in Europe and Fiorentina will fight you hard to keep the 20-year-old on FM19.

The club are, however, willing to accept an offer of around £60million for the Italian international. His agent will demand a wage for his client of around £150,000 a week and his own fee will likely be substantial.

Yet Chiesa is ready to make a big impact at a top side and will only improve. 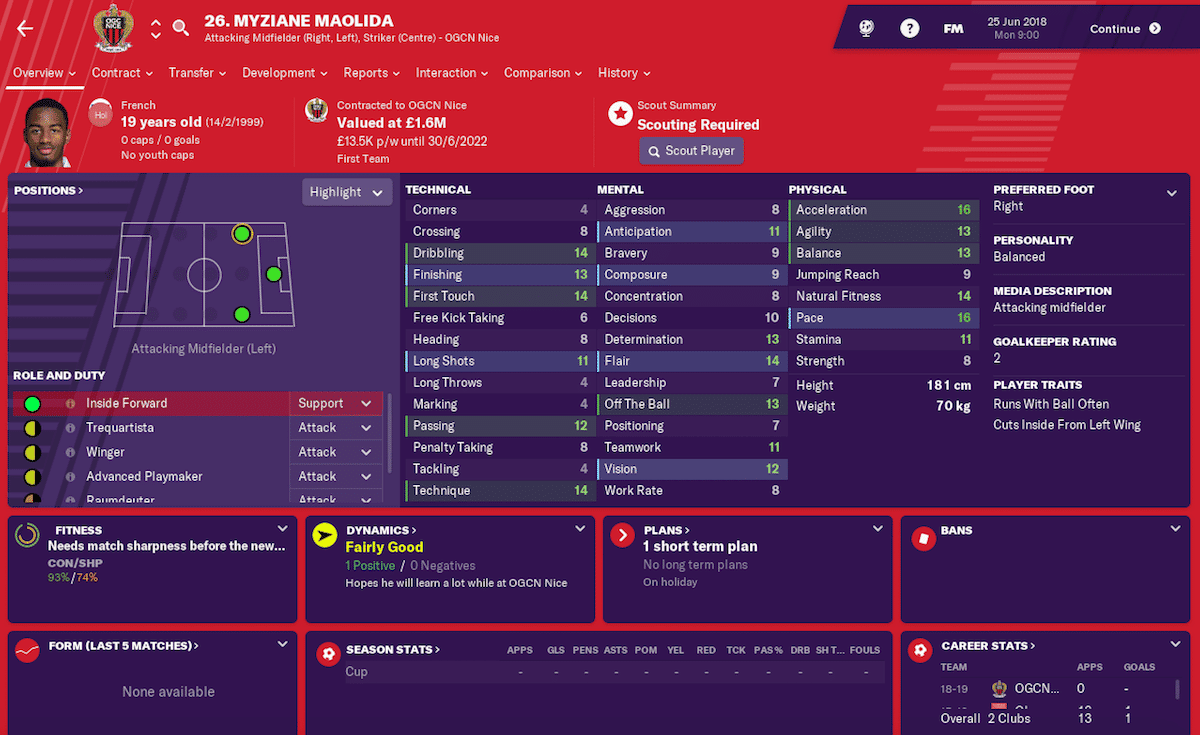 Ligue 1 has proven a hotbed of talent when it comes to wide players. Maolida is the next wonderkid off the production line.

Nice have just snapped him up so he won't consider leaving prior to the 2018/19 campaign getting underway but add him to your shortlist and keep an eye on his development.

With regular first-team football he should improve quickly and that means by the summer of 2019 it's worth, if you have the money, launching a bid.

He will cost around £40million but, with reasonable wage demands and no huge agent fee, Maolida is worth the long-term pursuit. 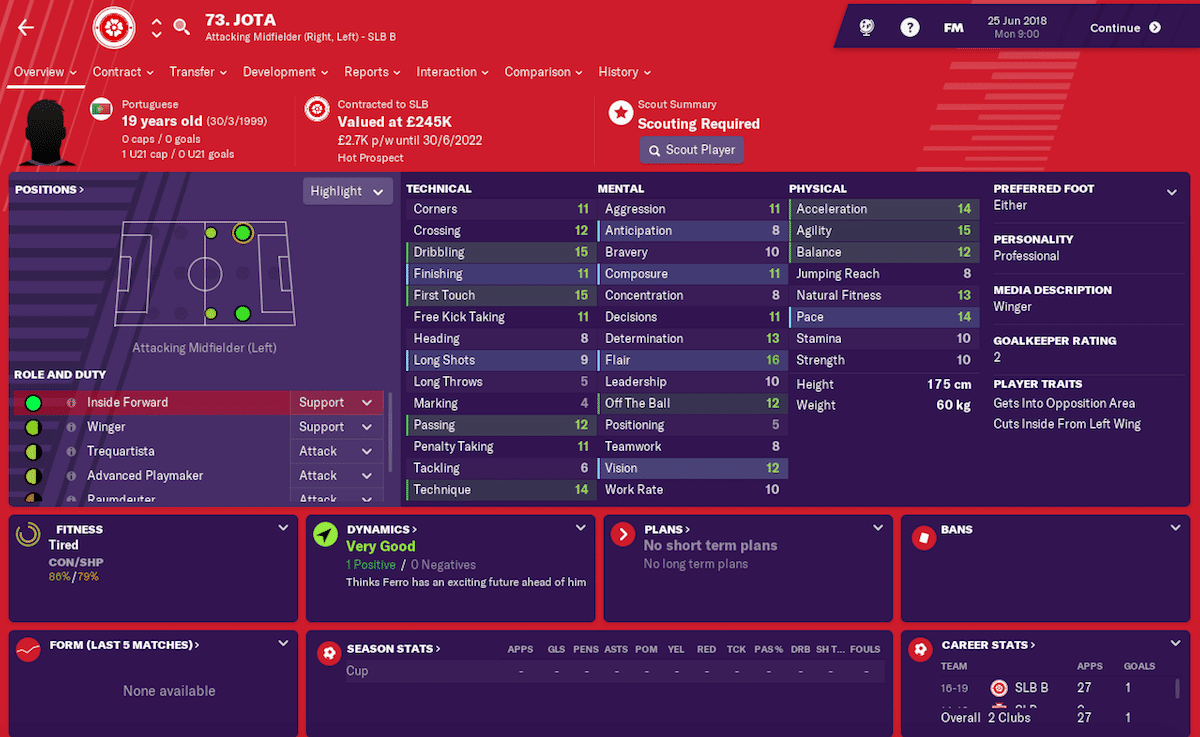 As mentioned in our best wonderkid midfielders article, Benfica have several exciting youngsters on FM19. And none of them can be bought on the cheap.

You will have to trigger Jota's buyout clause of £25million if you want to land him prior to the 2018/19 campaign getting underway. His agent will demand £35,000 a week for the winger and a rather steep £3million for his own services.

It means a move for the 19-year-old Portugese will make a big dent in your transfer budget. However, in time, he will prove worth the outlay. 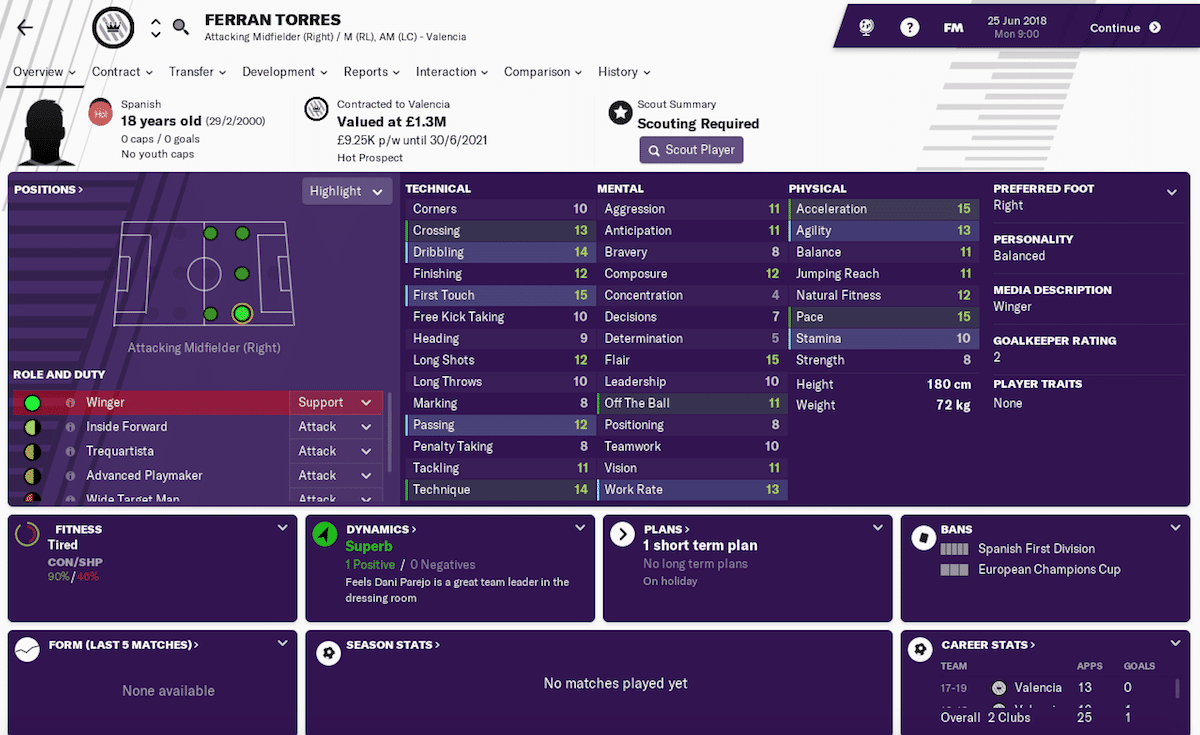 Valencia have several promising youngsters – usually at left-back – that FM players will want to try to sign on this year's edition.

Los Che will accept offers of around £15million for Torres before the 2018/19 campaign kicks off. However, he will not be willing to move having just signed a new contract with Valencia.

So you'll have to play the waiting game. The Spanish club's asking price will rise to around £20million by January but the winger will be ready to listen to offers to leave Mestalla.

It's a big fee to pay but given his promising physical and technical attributes, Torres has all the makings of a top-class winger. 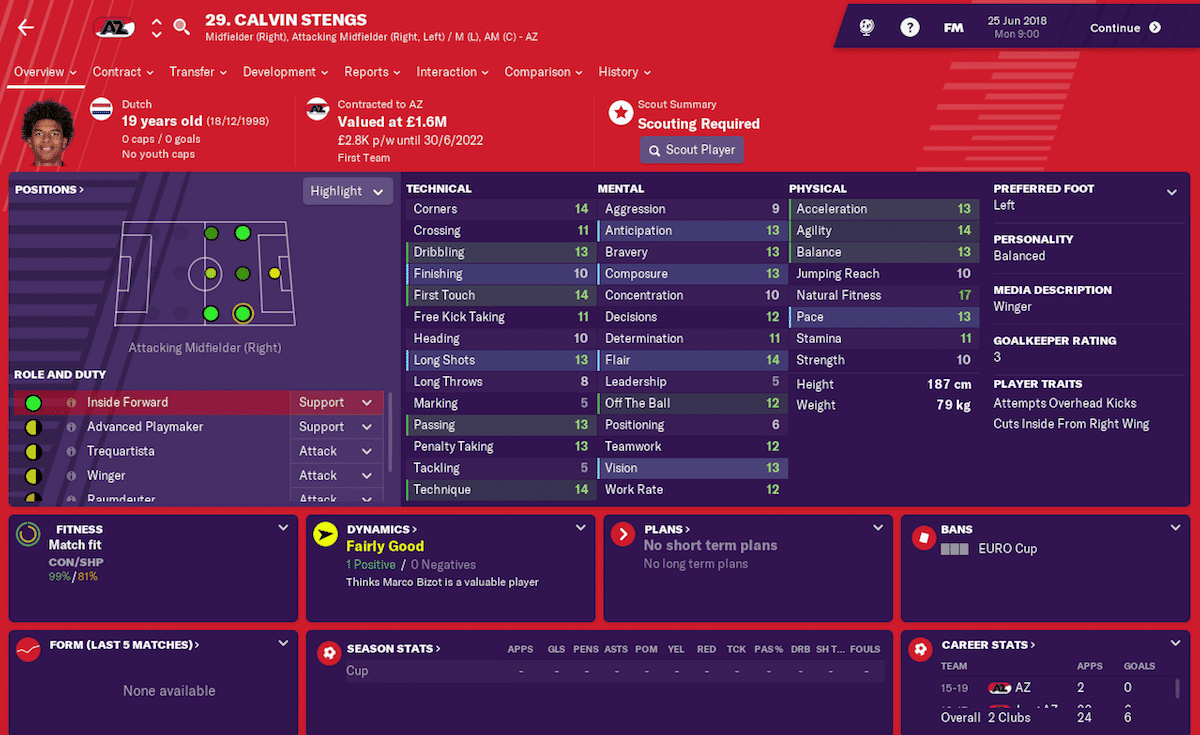 The above names will all cost big money but if you're looking for a more affordable wonderkid then Dutch winger Stengs should be your target. However, he will require work.

The £7million fee, £20,000-a-week wages and moderate signing-on fee mean he is a good option for a midtable club with longer-term ambitions of challenging at the top of the table.

With a couple of seasons development, Stengs ability and value will quickly soar. 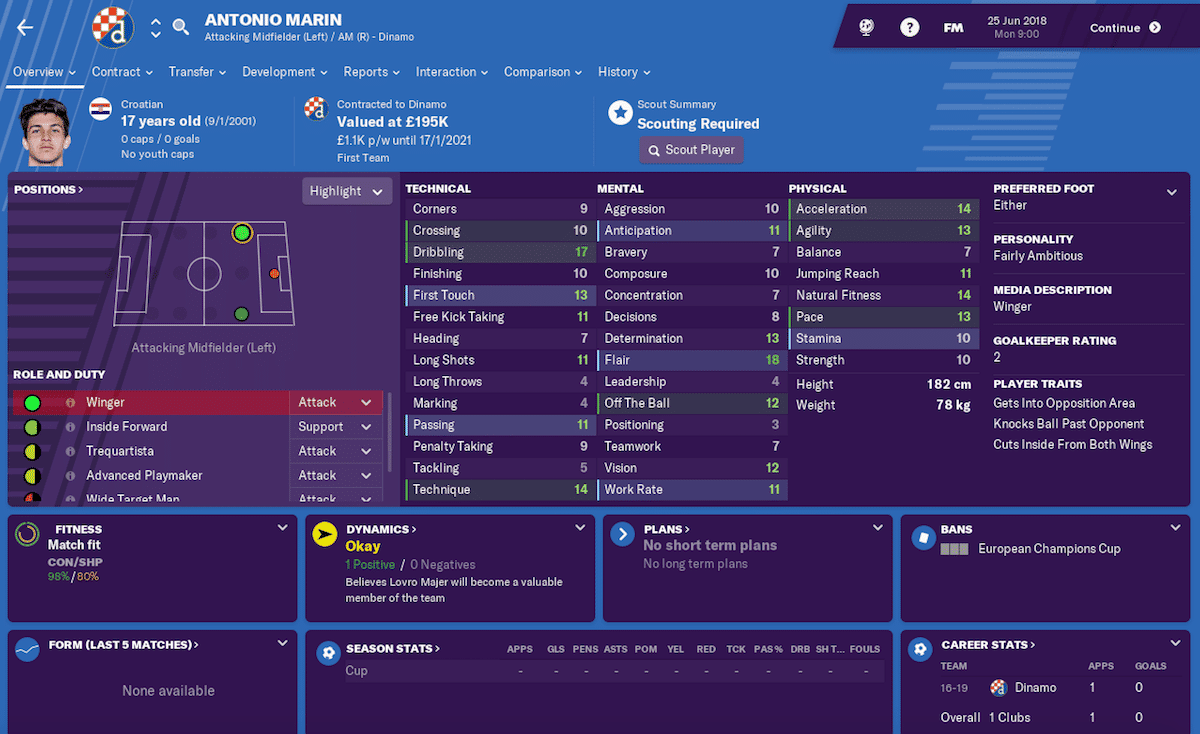 The majority of the wonderkids on this list don't come cheap. Antonio Marin does though.

That is because he is far from the finished article. At only 17 years old it will take two or three seasons of careful development for the winger to become good enough to start for a top side.

But given he will cost you just £3million, his wage demands are £7,000 a week and that he doesn't have an agent, so no fee, he is certainly worth signing if you have the cash to do so. 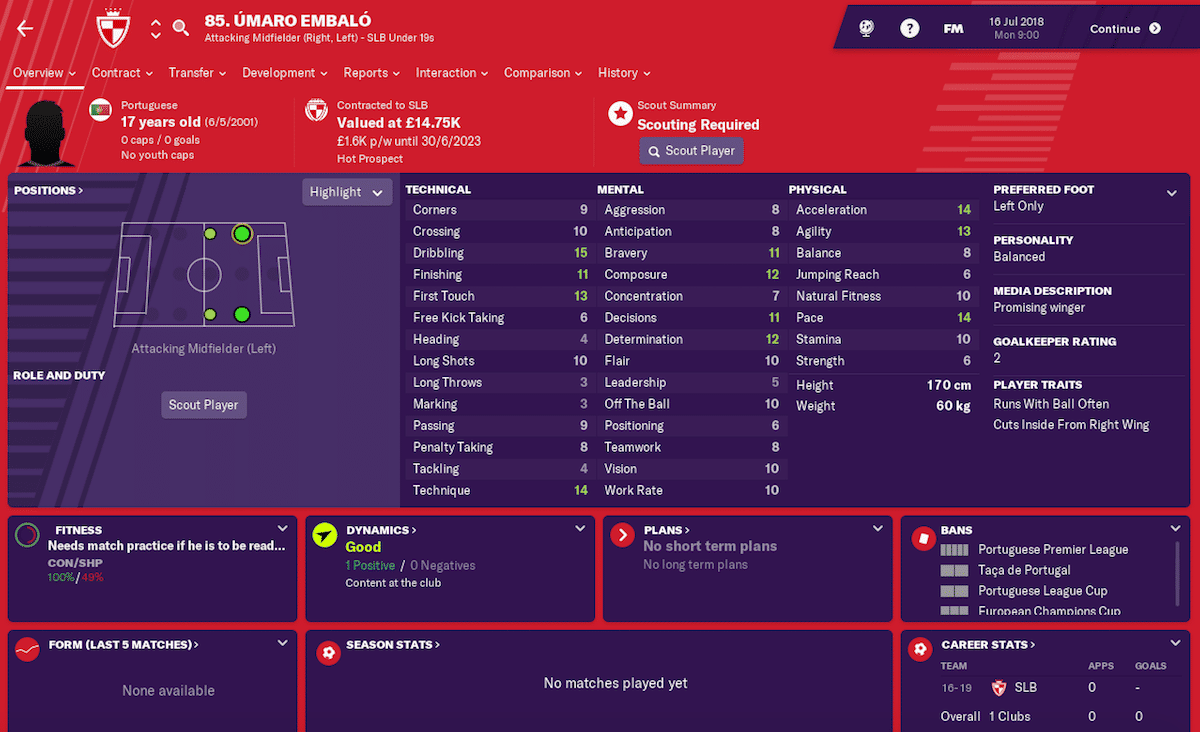 The Benfica wonderkid has attracted plenty of attention from Europe's biggest clubs despite not having made a first-team appearance.

Manchester City, Real Madrid and Barcelona have all been linked with the 17-year-old but you can snap him up – if you're a member of the European elite – for just £2.5million.

Embaló will want first-team squad status if he is to depart and accepts being a rotation option. His agent also only demands a weekly wage of £4,000 which makes signing the winger a no-brainer.

Word to the wise, though, you must have the Portuguse league loaded if want to sign the youngster.