There is perhaps nothing quite as exciting as a wonderkid striker bursting onto the world stage and quickly becoming a star.

Think of the hype that surrounded Kylian Mbappé during his breakout campaign at Monaco. Or, for those with longer memories, the anticipation every time an 18-year-old Michael Owen got on the ball for Liverpool

So it's natural that when you begin your latest save on Football Manager 2019 that you go hunting for a wonderkid forward. After all, who doesn't want a player who can make the difference in tight games for years to come?

Finding these wonderkids takes time, though, and not everyone has that. So we're here to help.

We have already put together a list of the best wonderkid goalkeepers, defenders, midfielders and wingers on this year's edition of FM. And now we've got to the strikers… 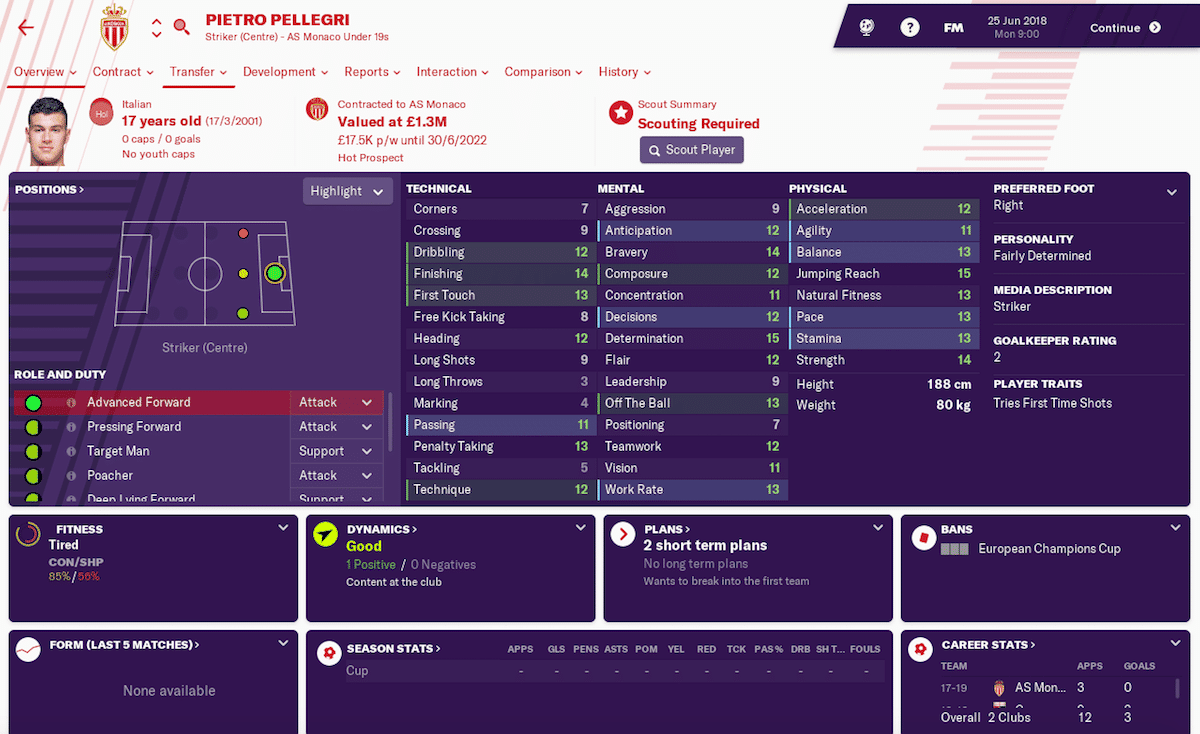 For even the most seasoned of strikers, Serie A can be a tough nut to crack. So when Pellegri burst onto the scene at Genoa, scoring braces in the Italian top flight as a 16-year-old, Europe's biggest sides quickly took notice.

Monaco moved quickest to sign the young striker, though, and he joined the Ligue 1 side in January 2018. It's why you won't be able to land him on FM19 before the 2018/19 campaign gets underway.

While Monaco will accept a bid of around £55million, Pellegri won't be interested in departing. The following January is a different story.

His price-tag won't have dropped but he is willing to leave and will want around £30,000-a-week and a role in the first-team squad. 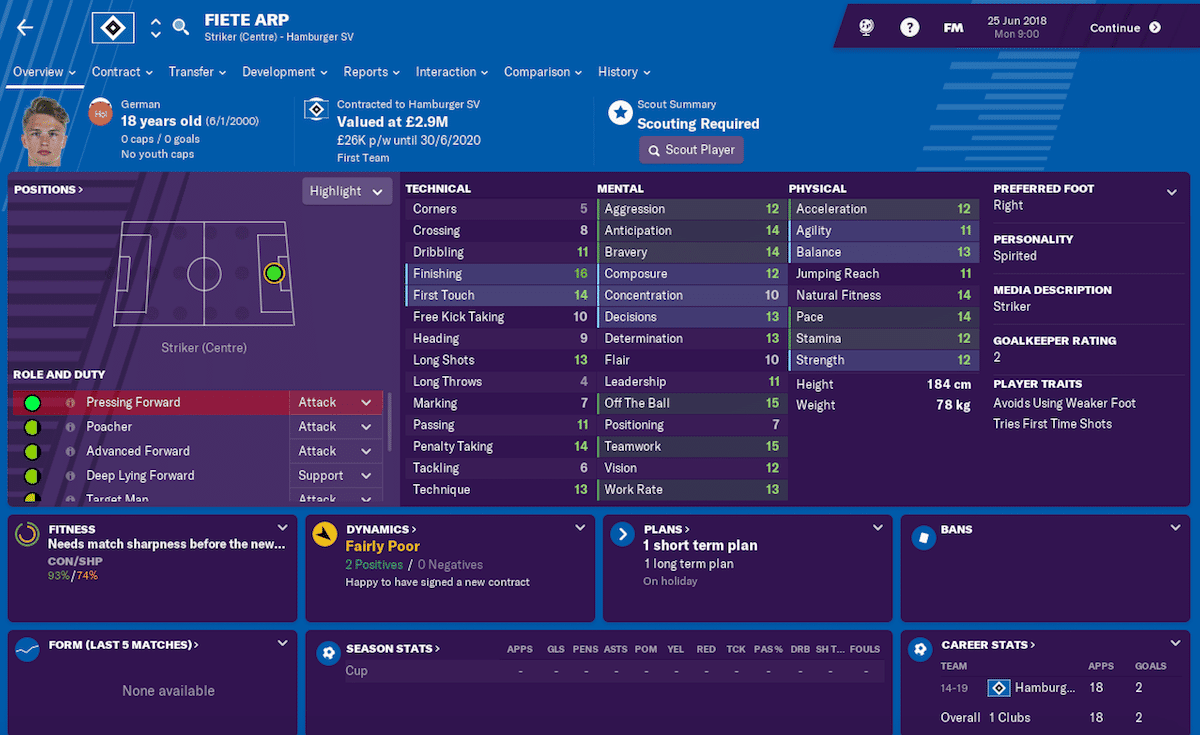 The young striker, who has modelled his game on England star Harry Kane, was wanted by Bayern Munich in the summer following Hamburg's relegation from the Bundesliga.

Yet instead of following many a young German talent in signing for the Bavarians, Arp decided to sign a new contract with HSV and set his aim on helping the club secure promotion back to the top flight.

However, on FM19 he is willing to depart if a fee can be agreed with cash-strapped Hamburg. The Germans will accept an offer of around £19million for the youngster and he will only require a weekly wage of £19,000. 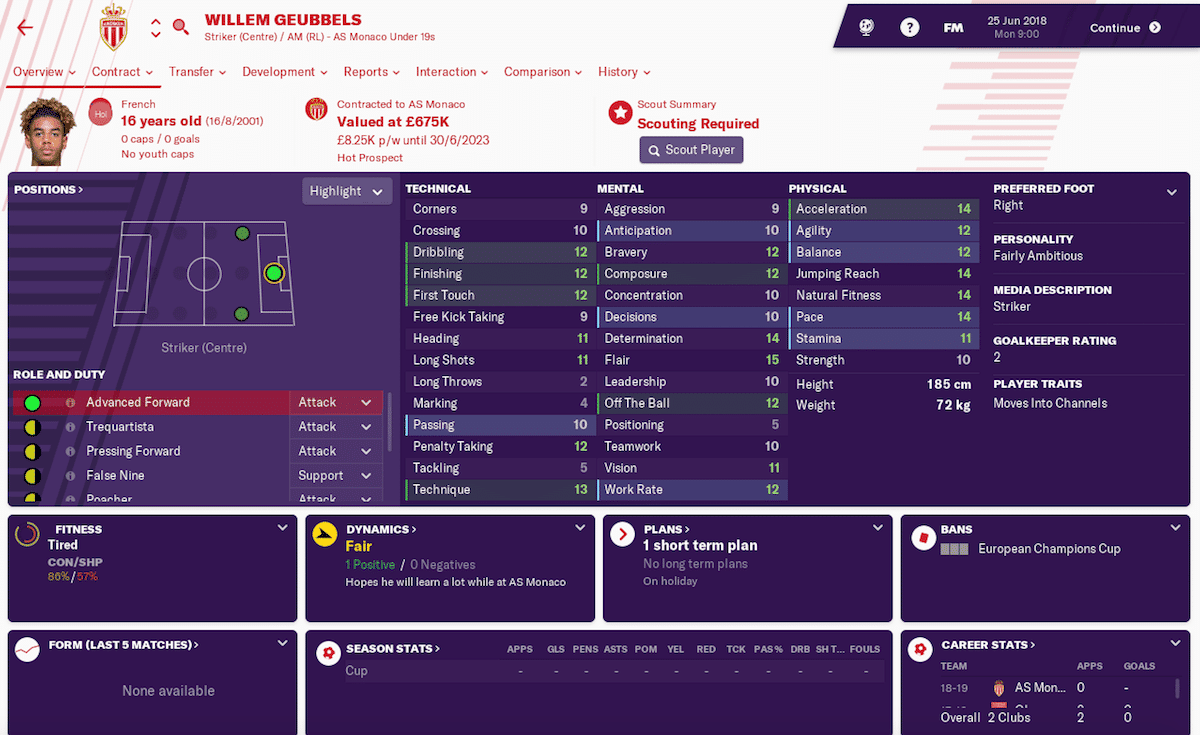 A product of the Lyon academy, the 16-year-old forward had made only four appearances for OL before Monaco decided it was worth spending €20million to sign him in the summer.

As such you won't be able to buy the French wonderkid straight from the off on FM19 as he won't consider leaving his new club.

By January it's hit and miss. There are occasions he is happy to discuss terms if Monaco accept a bid, which will have to be around £50million.

However, if he's not ready to talk, wait a couple of months and go again. Geubbles will be open to a move ahead of the summer transfer window and will want a wage of around £22,000-a-week to make the switch.

The young Norwegian striker has already agreed to join RB Salzburg in January 2019, so you'll have to be patient if you're to land his signing.

Ahead of the 2019/20 season you can make your move. Salzburg will want a fee of around £11million for the teenager, which isn't enough to scare off many midtable sides let alone the best in Europe.

His wage demands can be steep, however. He will want around £65,000-a-week while his agent will expect a fee of around £1.5million for his services. 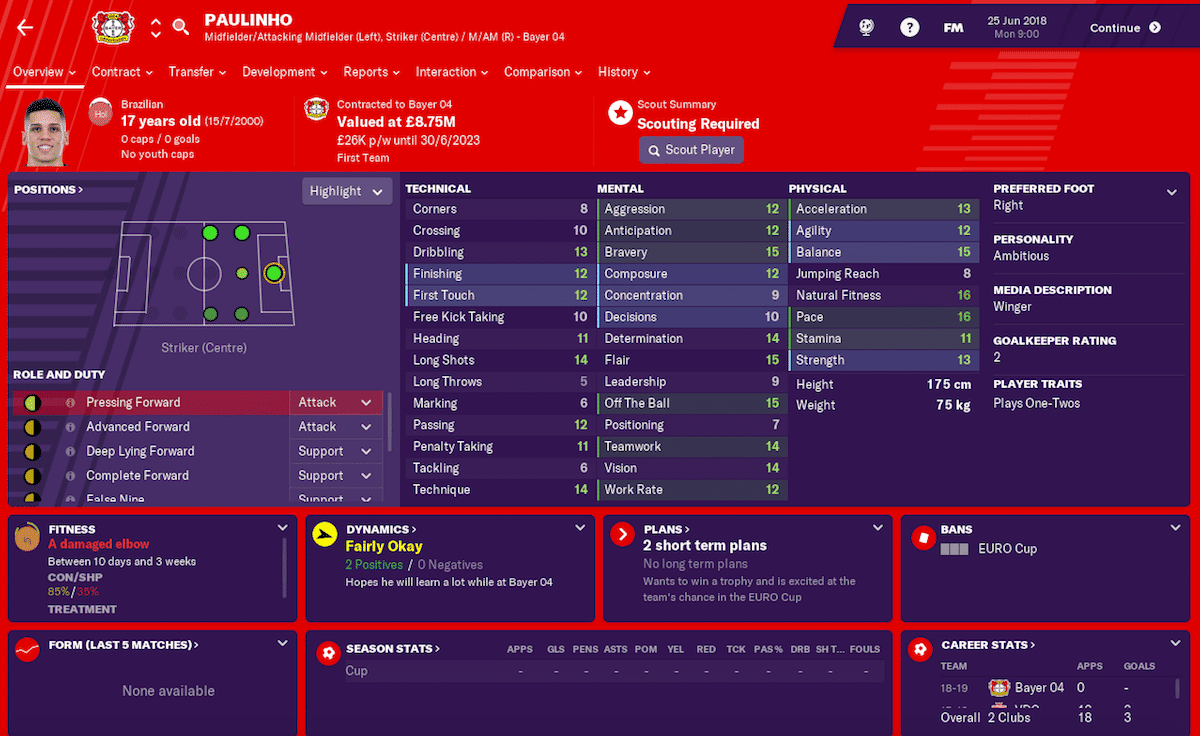 Bayer have a number of wonderkids – as touched on here and here – and Paulinho is another to add to the list.

The German club paid Vasco da Gama €20million to sign the forward and he has only just arrived in the Bundesliga when you begin your save.

So, at that stage, there's no chance he'll leave. The following summer he will.

Bayer can be coaxed into selling for £55million and the young Brazilian will expect a wage of around £60,000-a-week and will want to be a rotation option. 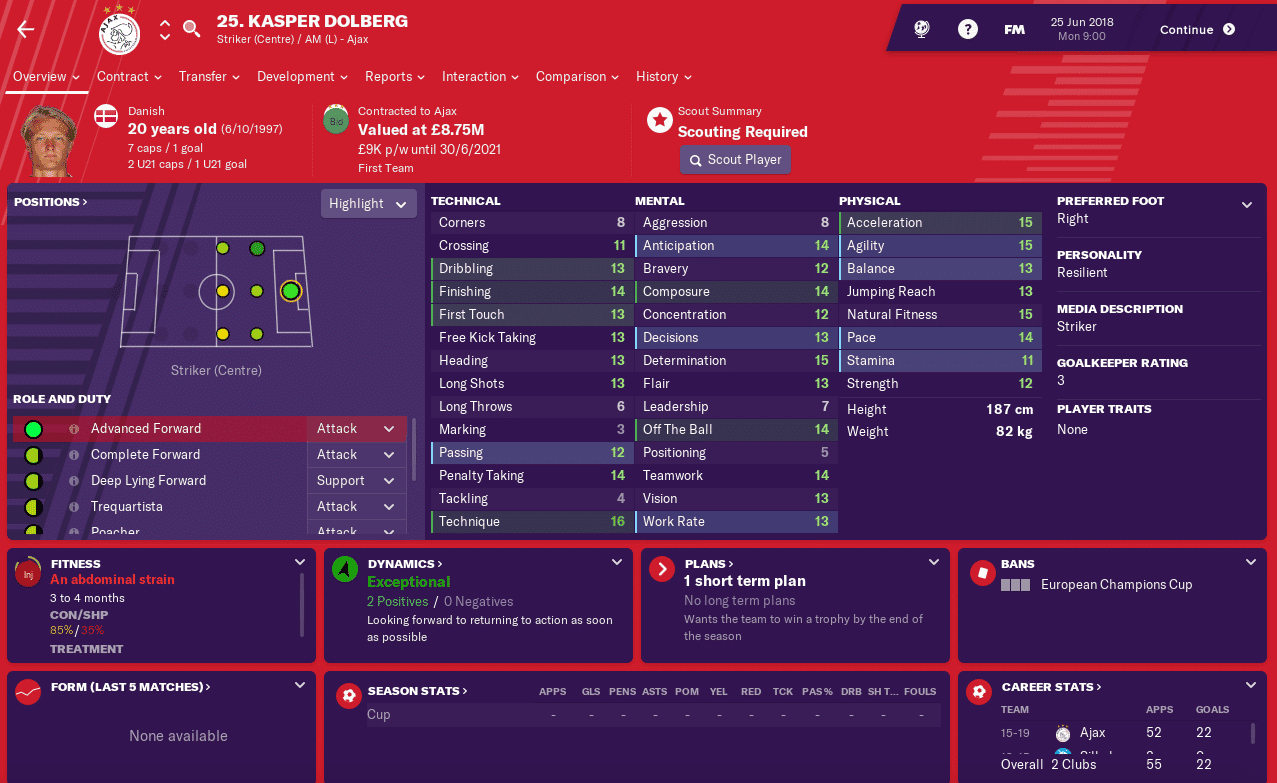 Perhaps it's because of the emergence of the likes of Frenkie de Jong, Matthijs de Ligt and Donny van de Beek that the hype around Dolberg has dwindled over the last year.

However, that is to your benefit on FM19. The Dane remains an excellent prospect and the ideal advanced forward for a side that plays possession football.

And best of all, Ajax are willing to let him depart for a fee of around £22million. 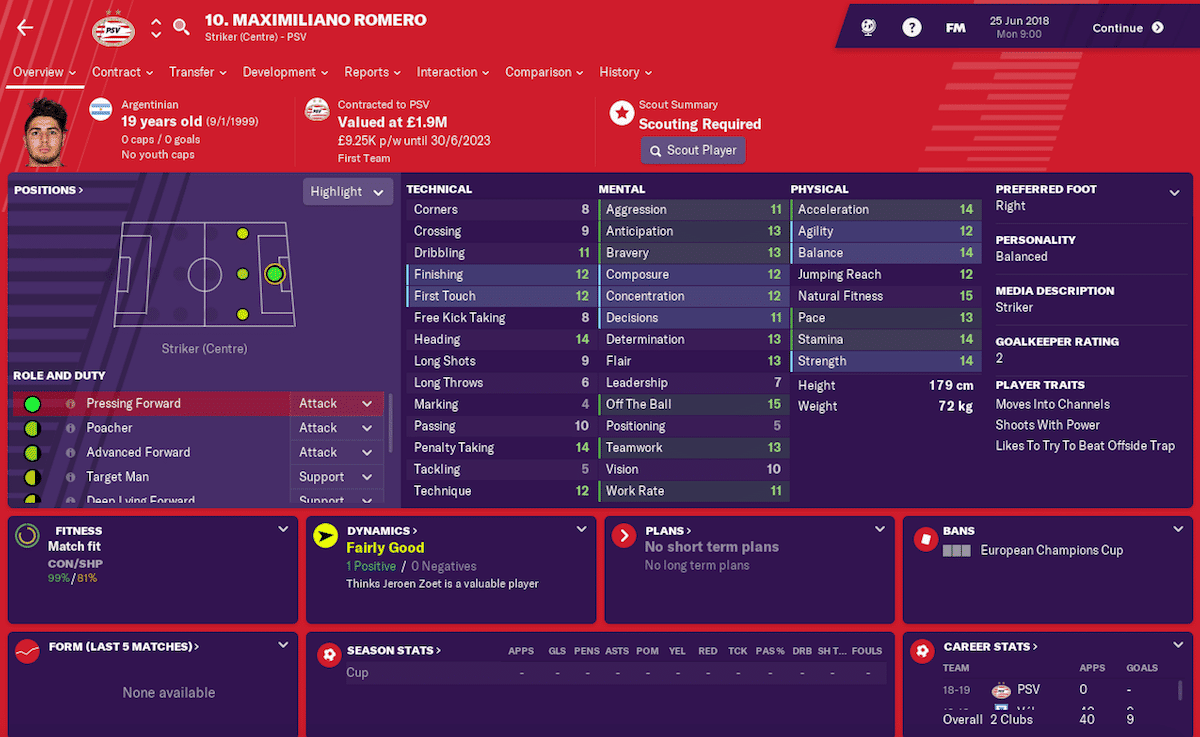 Given the Argentine has only just signed for PSV there is no point pursuing him from the off. He simply won't be interested in a move.

So be patient, add him to your shortlist and return for the striker in January. The Dutch club are usually willing to sell for around £13million and Romero is far happier to engage in contract talks.

If you're one of Europe's biggest sides, he will happily accept the role of being a hot prospect and his wage demands will be in line with that; around £9,000-a-week.

What might be the smart move, though, is to allow him to finish the campaign with PSV where he is usually a regular in the first-team squad. 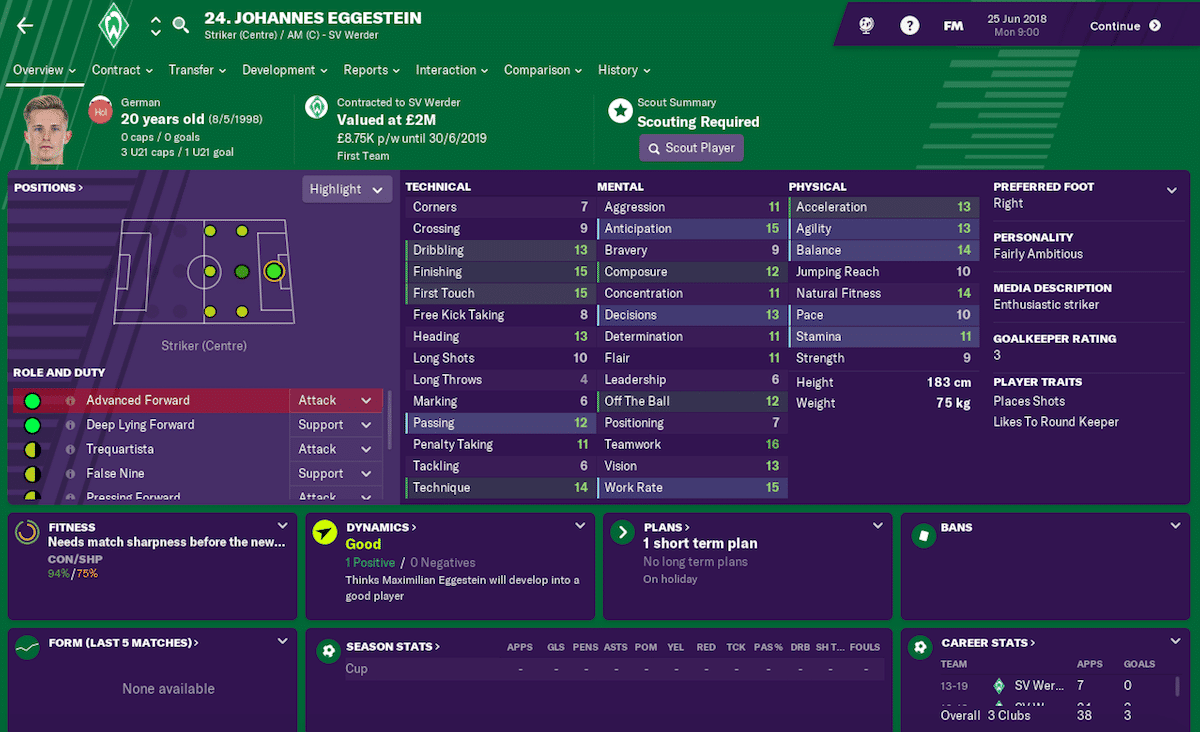 The Bundesliga is often seen as the ideal training ground for young talent. And, as a result, several wonderkids are given their opportunity to shine.

Eggestein is one such player. The Germany Under-21 international has been eased into the first-team picture at Werder Bremen this season but has impressed.

It's why on FM19 he is one of the division's most promising young strikers. And Werder know it.

They will want around £23million for Eggestein and may even ask for the option of loaning him back until the end of the 2018/19 campaign. You can, of course, remove that but expect the price to rise by a couple of million.

The 20-year-old won't command huge wages, around £13,000-a-week, and his other demands are reasonable too. 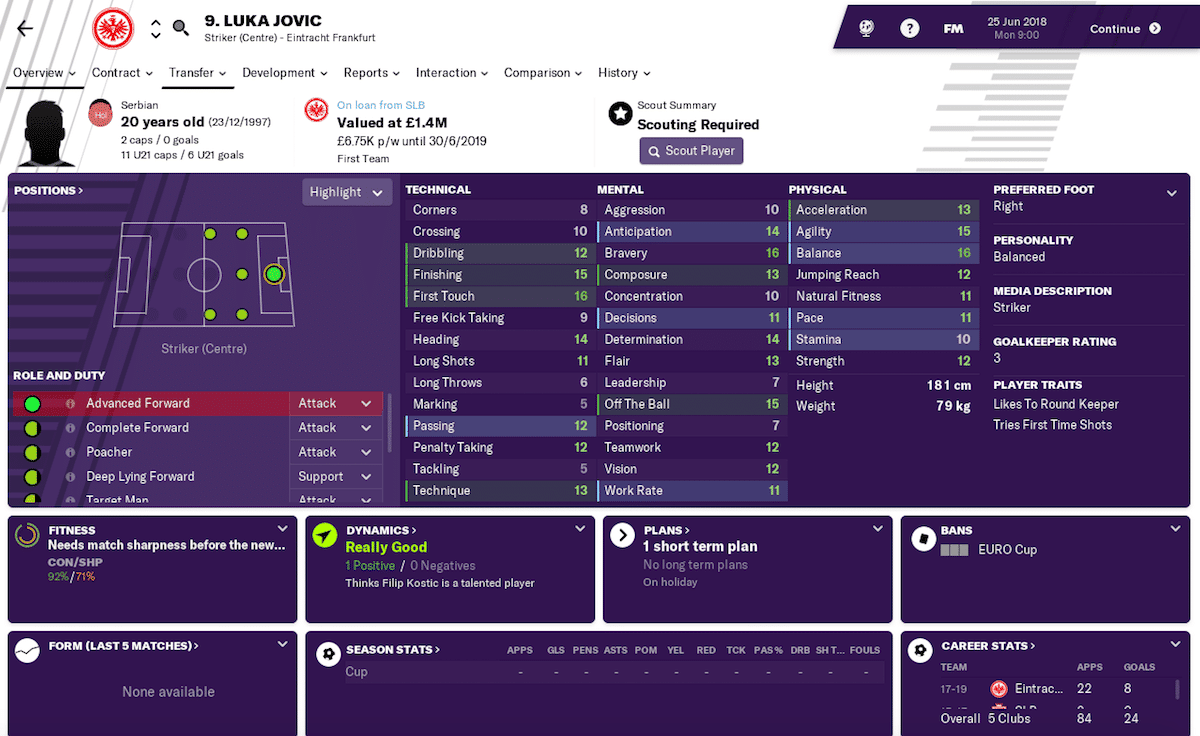 The Serbian wonderkid, who recently scored five goals in a game, starts FM19 on a season-long loan at Eintracht Frankfurt from Benfica.

The German club have an option to make his signing permanent for around £10million and usually trigger this at the end of the campaign.

That means that Jović isn't likely to be going anywhere until January 2020 at the earliest as he isn't willing to depart his ‘new' club so soon after joining.

You'll have to play the long game to land the Serbian but he will certainly be worth the chase. 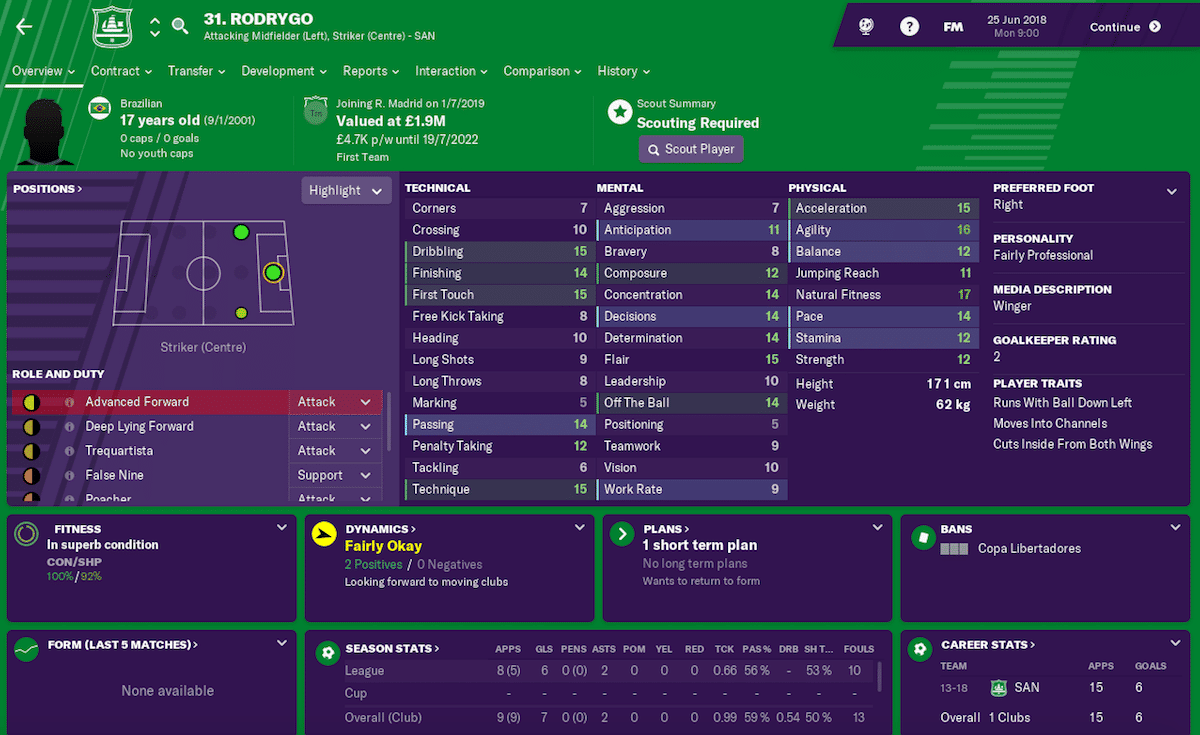 The Brazilian is one of the most promising talents in world football and that is reflected on FM19. Sadly, however, you'll have an arduous mission to undertake if you want him to join your club.

Real Madrid already have a deal in place to sign Rodrygo, with the forward arriving in the Spanish capital in the summer of 2019. At that point, even if you were to have a mammoth bid accepted, he won't want to leave his new club.

And so you will have to wait another year. By this point his value will, depending on how many games he's played, hugely increased and Los Blancos won't be willing to sell unless you stump up a fee in excess of £100million.