Many a side are often only as good as their midfield. So keep that in mind when you begin your next Football Manager save and go on the hunt for a wonderkid or two.

Yes, FM19 is out and that means several hours spent honing your man-management, testing your tactical nous and proving your acumen in the transfer market.

However, if you don't have the countless hours needed to unearth several of the world's brightest prospects then let us step in and help.

We have already identified the wonderkid goalkeepers, wonderkid defenders and wonderkid wingers you should be targeting on the latest instalment of Football Manager. And now it's the turn of the midfielders.

We have worked hard to find players with varying valuations and wage demands so that you don't have to be one of Europe's elite sides in order to secure the services of a rising star. 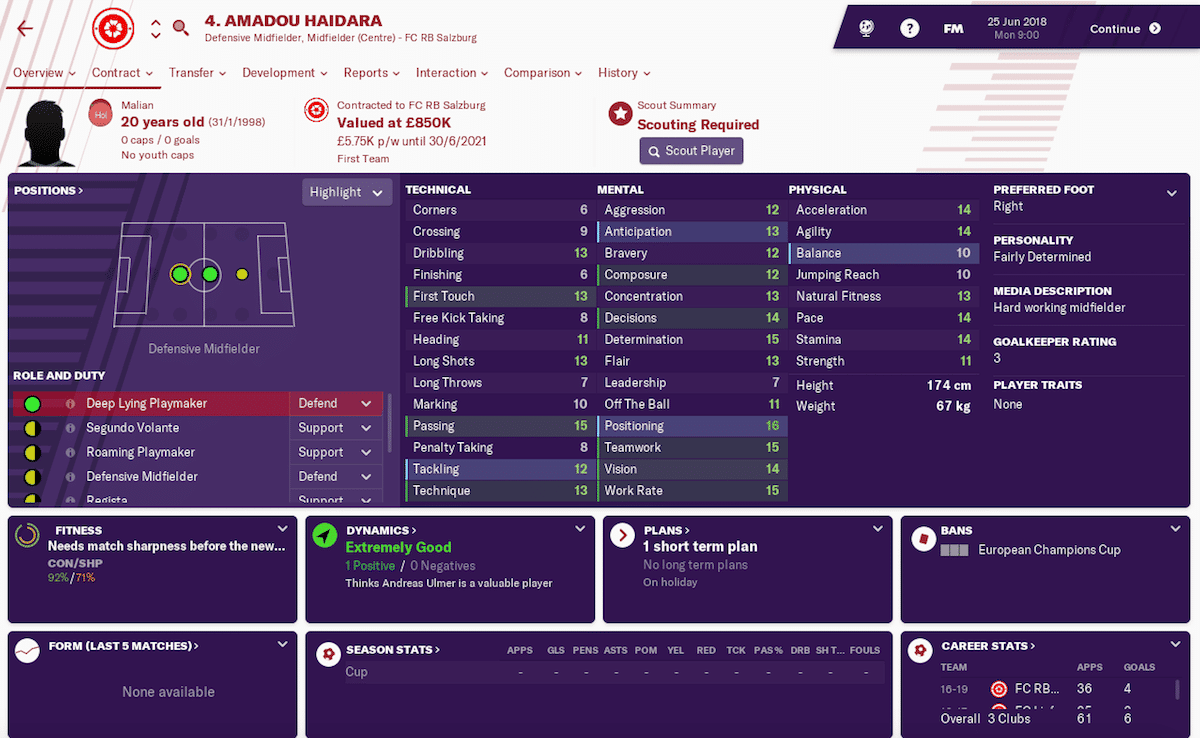 It is believed Haidara was chosen by the excellent scouts in the Red Bull group to be Naby Keïta's replacement at Salzburg. And that tells you the midfielder is a player with big potential.

While he is valued at under £1million the Swiss club won't accept an offer under £10million.

While that may appear fairly steep, his wage demands will be a modest £16,000 a week, while his other fees won't take a huge chunk out of your transfer budget. 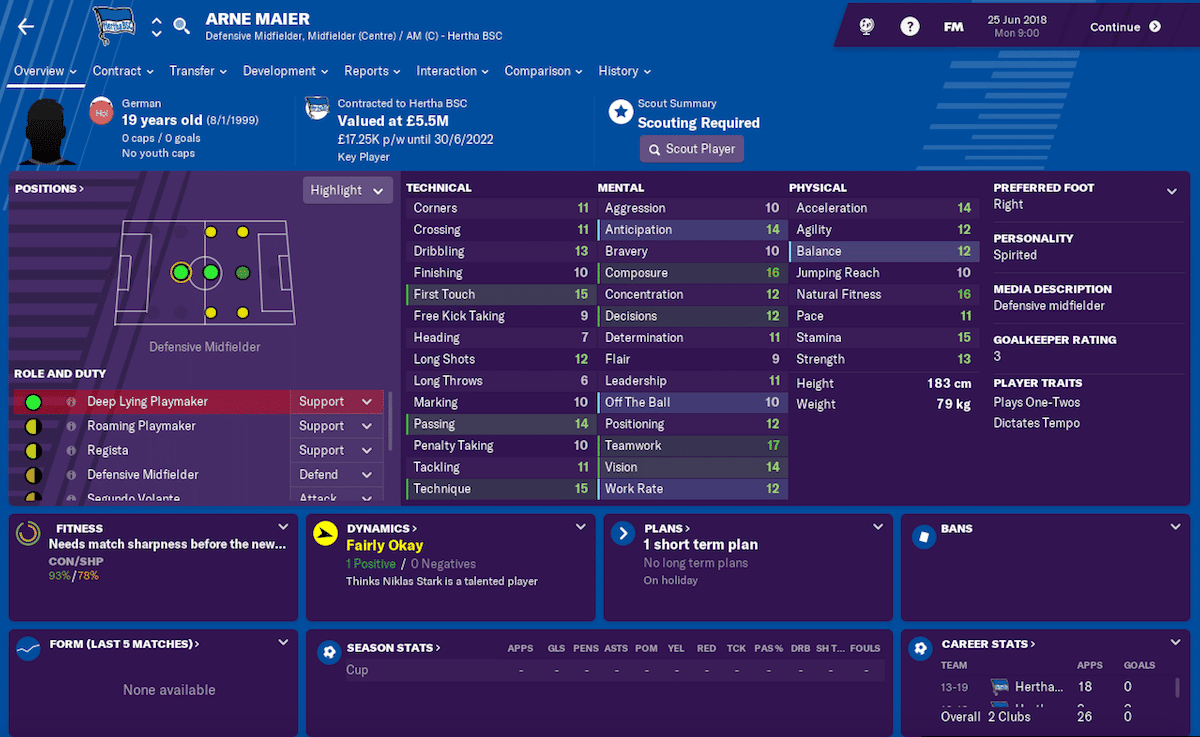 While the German national team maybe be struggling, the conveyer belt of talent being produced by the 2014 World Cup champions continues to roll on.

Maier has the potential to become one of the finest deep-lying playmakers on FM19 and would be an excellent addition to many a top side despite his tender years.

But, and it's a big but, convincing Hertha to sell is a laborious task. The Bundesliga side will constantly demand a fee of well over £100million and it takes a monumental effort to get them to budge on that.

If you are willing to pay the extortionate price then you'll be pleased to know that the midfielder's contract demands are somewhat reasonable – he'll want around £90,000 a week. His agent's fee, however, isn't with the man putting together the deal wanting a staggering £15million. 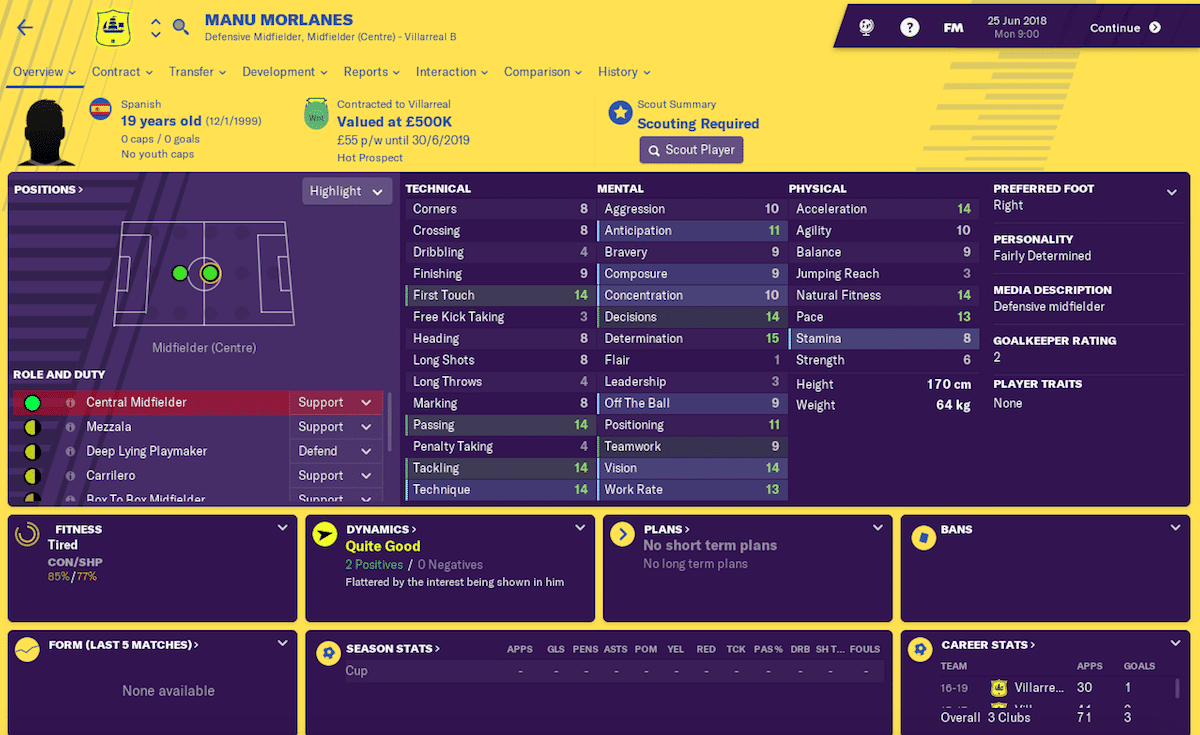 An easy deal to get done. Morlanes has a £750,000 minimum-fee release clause, so there's nothing Villarreal can do to stop you swooping in and signing the talented Spanish midfielder.

His wage demands are not extravagant either: we got him to join our side for under £9,000 a week. So he could be the perfect long-term investment for an ambitious midtable side or even a member of the elite.

With the right training and plenty of first-team exposure, the 19-year-old can become one of the best midfielders in Europe. 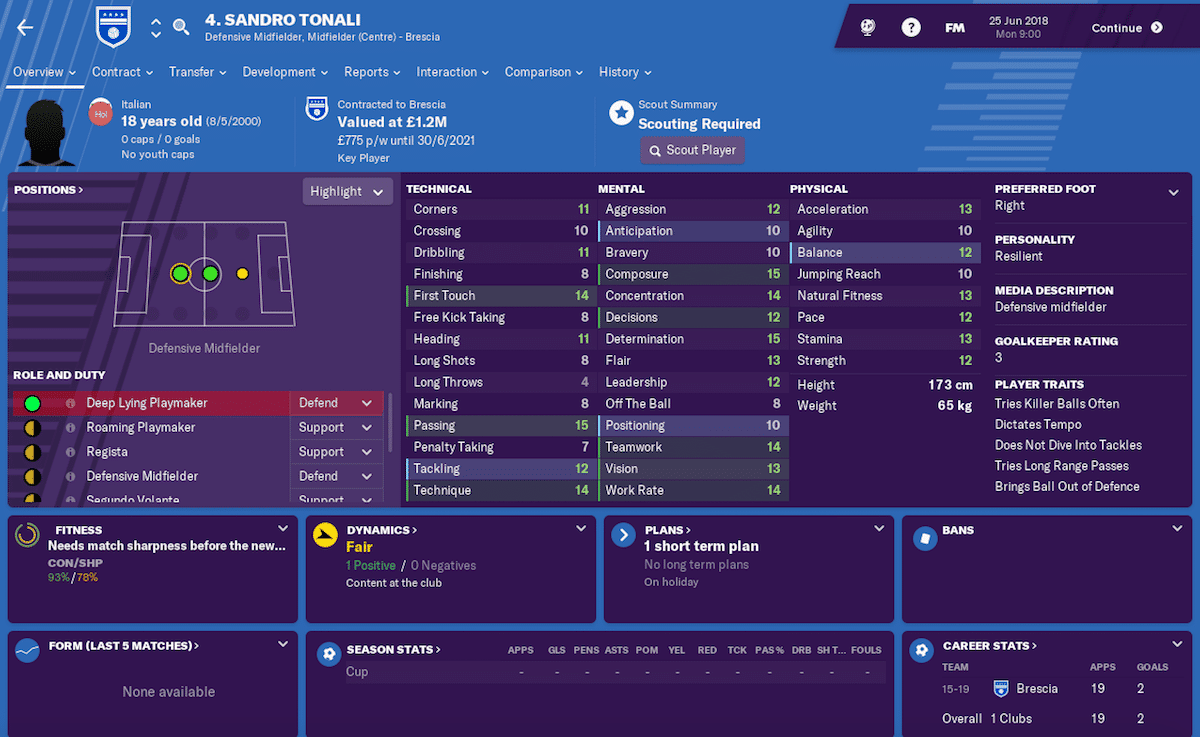 Dubbed the ‘new Pirlo' the hype around Tonali is quicking growing. The Brescia midfielder is supposedly a Chelsea transfer target, while several Serie A sides are also interested in the 18-year-old.

On FM19 the race to sign the Italian is just as fierce and that means you'll have to move fast in order to bring him to your club.

An offer of around £7million is accepted by Brescia and his demands of around £9,000 a week are easily affordable. The question is whether you go above those to sweeten him in moving to your side.

If you land Tonali then you've got an excellent deep-lying playmaker, one who could just go on to rival Pirlo.

The talented Spanish midfielder may prove one of the bargains of this year's edition. Melendo has a £6.25million buyout clause in his contract at Espanyol, so the La Liga side are powerless to stop any bid that matches or exceeds that.

His agent will demand a wage of around £22,000 a week, which is also easy to hit for the majority of top-flight sides across Europe. So he could be the perfect midfielder for a midtable side or an ideal rotation option for a bigger club.

But act swiftly. If Espanyol offer him a new contract that buyout clause balloons.

Few countries have been producing as many quality young players as France in recent years and Cuisance is just the latest name to add to a very long list.

The 18-year-old's physicals need developing but he already has the technical gifts required to shine in one of Europe's big leagues.

Gladbach won't let him go without a big fee being paid, though. They will push for a deal structured at over £100million but you can negotiate that down to around £75million. 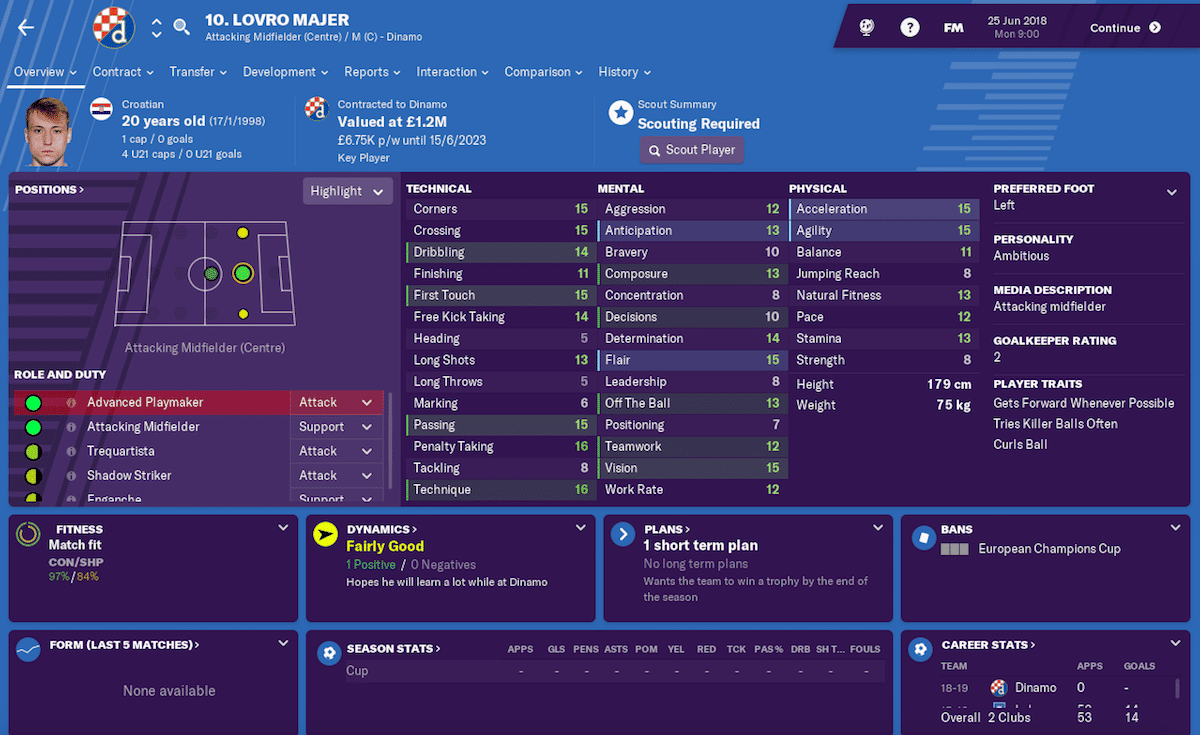 There aren't too many clubs that have honed the talents of gifted young players as well as Dimano and Majer is set to be the next midfielder star off the production line.

The Croatian has all the stats needed to become one of the best No.10s on FM19 but you'll have to wait until at least January 2019 to sign him as he has only just joined the Zagreb-based side.

A modest bid of around £8million tends to enough to convince Dimano to sell but Majer is not always willing to up sticks midseason. He is certainly a midfielder to keep going back for though. 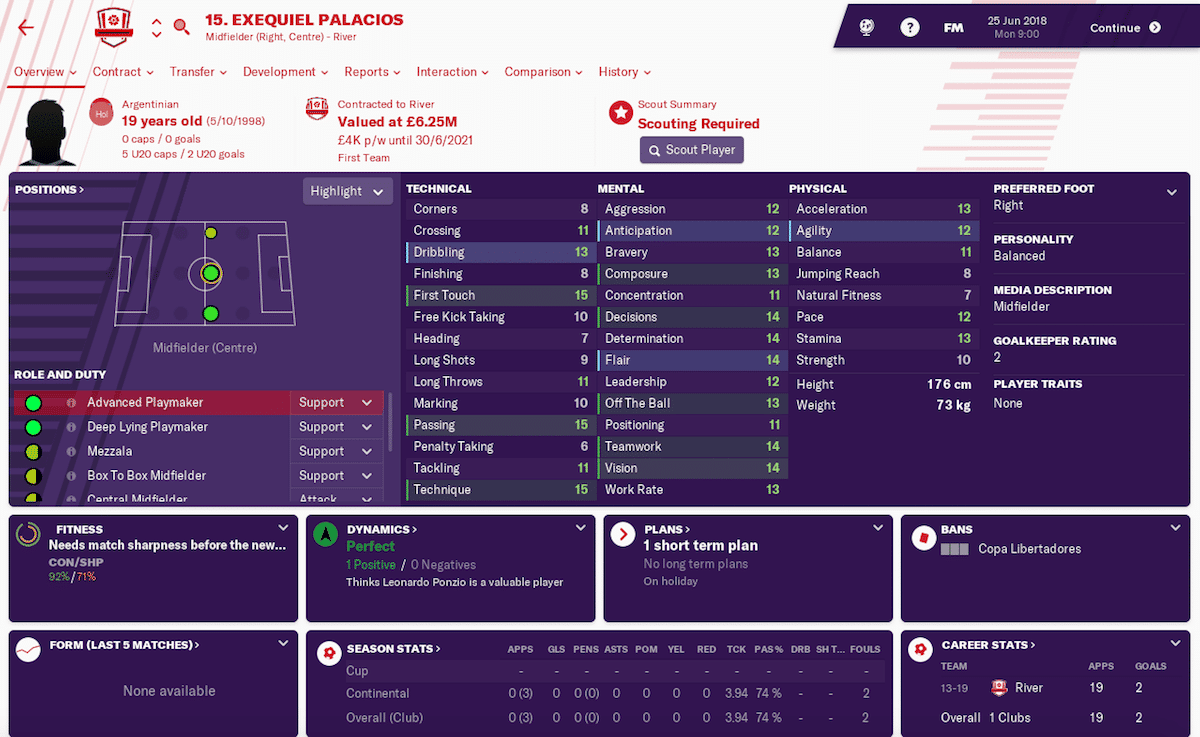 The Argentine midfielder is an Atlético Madrid and Barcelona transfer target and his potential on FM19 reflects that.

A bid of around £10million is often accepted by River and Palacios' wage demands aren't excessively high, around £21,000 a week.

A stumbling block could be his agent's fee, however, as that often exceeds the £1million mark. And you may have difficulty getting him a work permit if you're a club in England.

But you may feel the creative and versatile Argentine is worth the outlay. He can become a staple of your midfield for a decade. 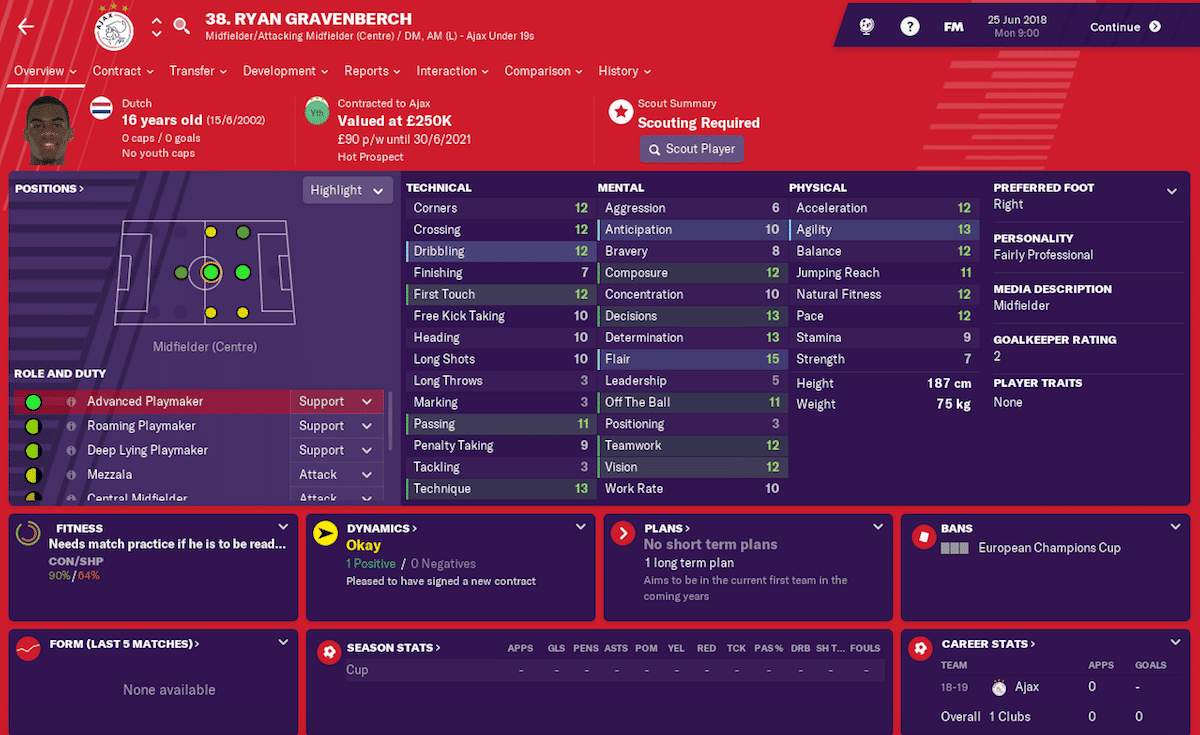 Ajax have several bright young prospects and most of them have been linked with big-money moves to Europe's elite – think Frenkie de Jong, Matthijs de ligt, Donny van de Beek.

Gravenberch is likely to be a name unfamiliar to many but that doesn't mean he is any less talented, he is simply younger than the aforementioned trio.

In the real world the midfielder has already made his Ajax first-team debut and on FM19 he is rated highly.

Ajax will accept offers of around £2.5million for his services prior to the 2018/19 season but he will be unwilling to move. It will be a similar case in January, with the young Dutchman preferring to continue his development at the club.

So it will be worth returning for him in the summer of 2019. Keep in mind, however, Ajax's asking price is likely to have significantly risen in that time. 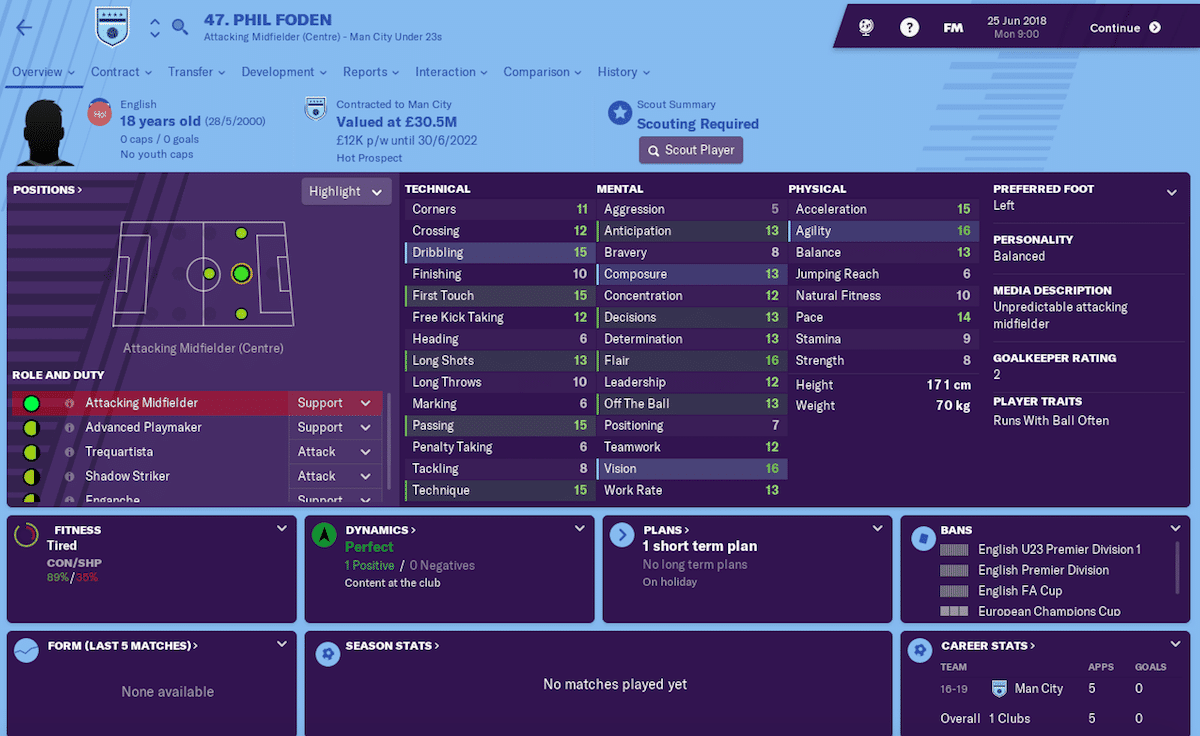 Foden's star has been on the rise since he shone at the 2017 International Champions Cup against Manchester United. He is regarded as one of the brightest midfielders of his generation and has been called by City fans ‘the Stockport Iniesta'.

His starting value on FM19 reflects his huge potential and getting him away from Manchester City doesn't come cheap. However, it does come cheaper than you may think.

The Premier League champions are ready to accept an offer of around £80million for the wonderkid – although he won't even considering leaving the Etihad for a team without Champions League football.

His wage demands are also pretty steep for someone who isn't yet ready to play week in, week out at the top level. But you may be willing to take the hit to sign a midfielder who can dictate games for more than 15 years.

Benfica have many an exciting wonderkid on their books but João Felix is undoubtedly the pick of the bunch.

The whispy 18-year-old, who can play as a No.10 or out wide, has huge potential and can become a star at Europe's biggest clubs. It will take a deal structured at around £30million to convince Benfica to sell but that shouldn't deter you.

A contract worth a modest £20,000 a week should be enough to entice the midfielder, who will get better and better over the following seasons. 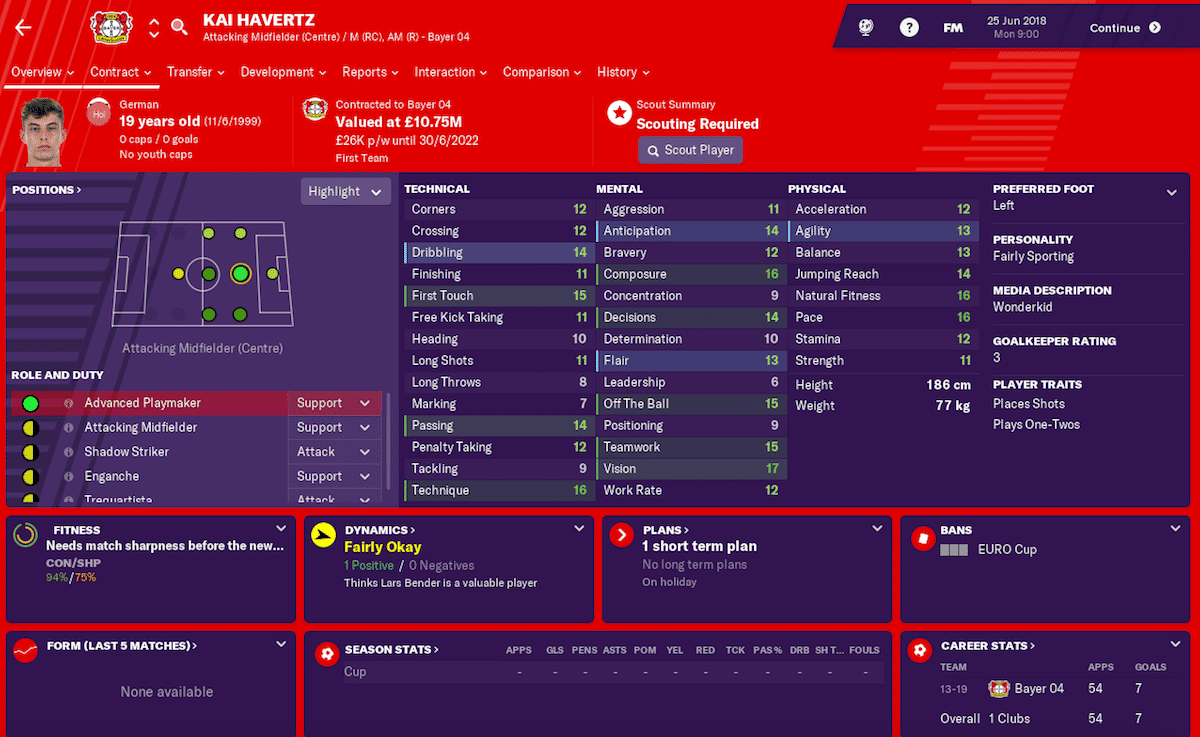 Bayer Leverkusen's Havertz has long been tipped for stardom. Liverpool were keen to sign him last season and even showed the midfielder around their Melwood training ground.

Yet he remained at Leverkusen and prising him away from the German club on FM19 is certainly hard work.

You'll have to part with around £80million for Bayer to even consider selling and his wage demands of around £80,000 a week make the total package required to bring the 19-year-old to your club exceed £100million.

But you may deem that outlay wise. Havertz is not only a fine creator, he is also a goalscorer. One you could build your attack for seasons to come.

One of Real Madrid's brightest youth prospects, it's surprising to find that at the start of any save he is available for just £68,000 thanks to a minimum-fee release clause.

Triggering that is, however, the easy part. Gelabert isn't willing to leave Madrid prior to the 2018/19 campaign getting underway and he often signs a new deal with Los Blancos during that first season.

However, he is worth pursuing, even if he ends up costing big money, as he has all the attributes needed to become a world-class No.10. 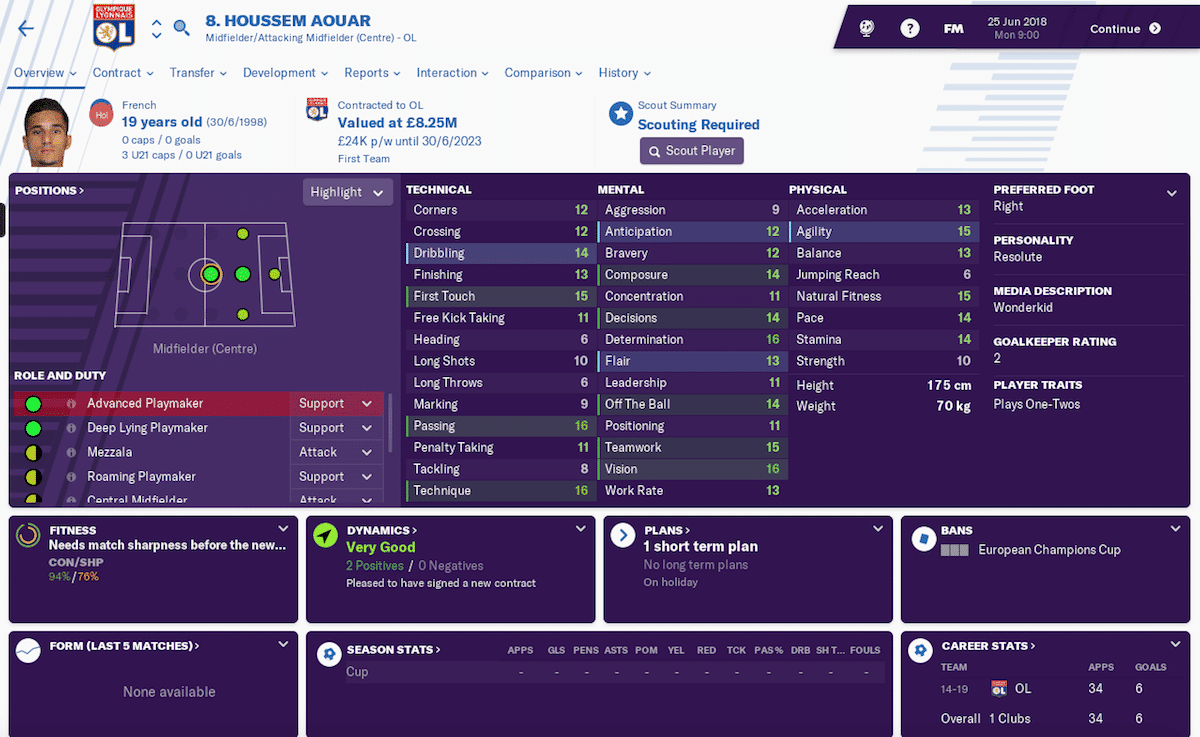 Few clubs in France have as productive academy as Lyon. Over the years they have had several wonderkids break through before being sold on for big money.

Aouar is set to be the latest on that list and if you want to sign him on FM19 it will require a significant outlay.

OL are, understandably, not willing to let one of the jewels in their crown go, so you will have to offer around £80million to convince them to do so prior to the 2018/19 campaign kicking off.

His agent with demand a weekly wage of around £100,000 but will want over £10million for his services. That will perhaps put many off but, if you can knock that down, then Aouar will certainly be worth the money.