The role of the defender has changed hugely over the last decade. Where once they were in the team to solely stop goals being conceded, now both centre-backs and full-backs are key components to starting and occasionally finishing attacks.

Younger players have been schooled very differently to many of their contemporaries and several of a side's gifted passers are now stationed in the backline.

However, their primary cause should not be forgotten and it was the legendary Sir Alex Ferguson who once quipped: “Attack wins you games, defence wins you titles.”

Now we're not certainly going to argue with the man who dominated the Premier League for over two decades, which is why it is vital to build a strong defence when you begin your latest adventure on Football Manager.

And, naturally, you will want to find a defender that can become a backbone of your side for years to come. So we have searched hard to find the best wonderkid defenders you should target in FM19.

Even if you aren't at one of Europe's biggest clubs, you should be able to sign one of the players on this list. However, you will need big money in order to land some of these starlets. 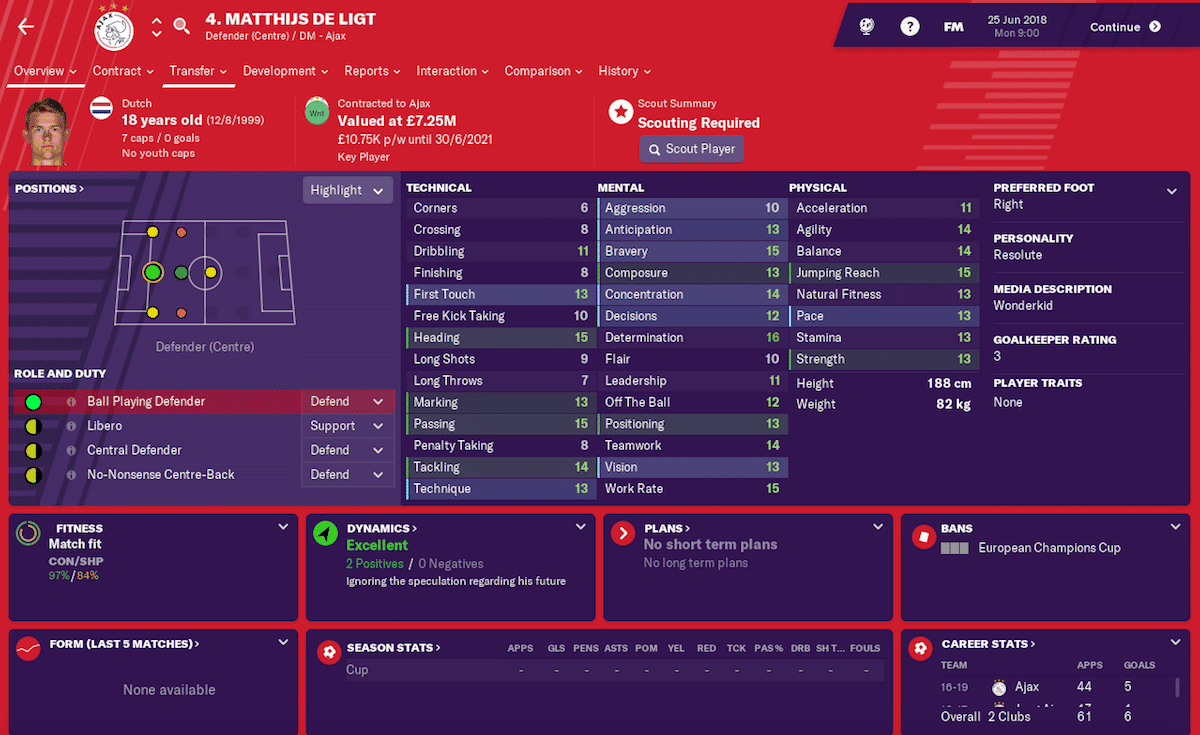 He's one of the most wanted young players in Europe, with the likes of Barcelona, Manchester City and Tottenham Hotspur all interested in him. So you would think it would take big, big money to sign De Ligt on FM19.

You'd be wrong. While he doesn't cost peanuts, Ajax are willing to accept a deal structured at around £30million for the talented teenage centre-back.

His agent will demand a wage of around £70,000 a week but that isn't going to scare of Europe's biggest sides or even ambitious mid-table Premier league clubs.

So if you want the perfect wonderkid centre-back, one who can marshal your defence for a decade, then De Ligt is your man. 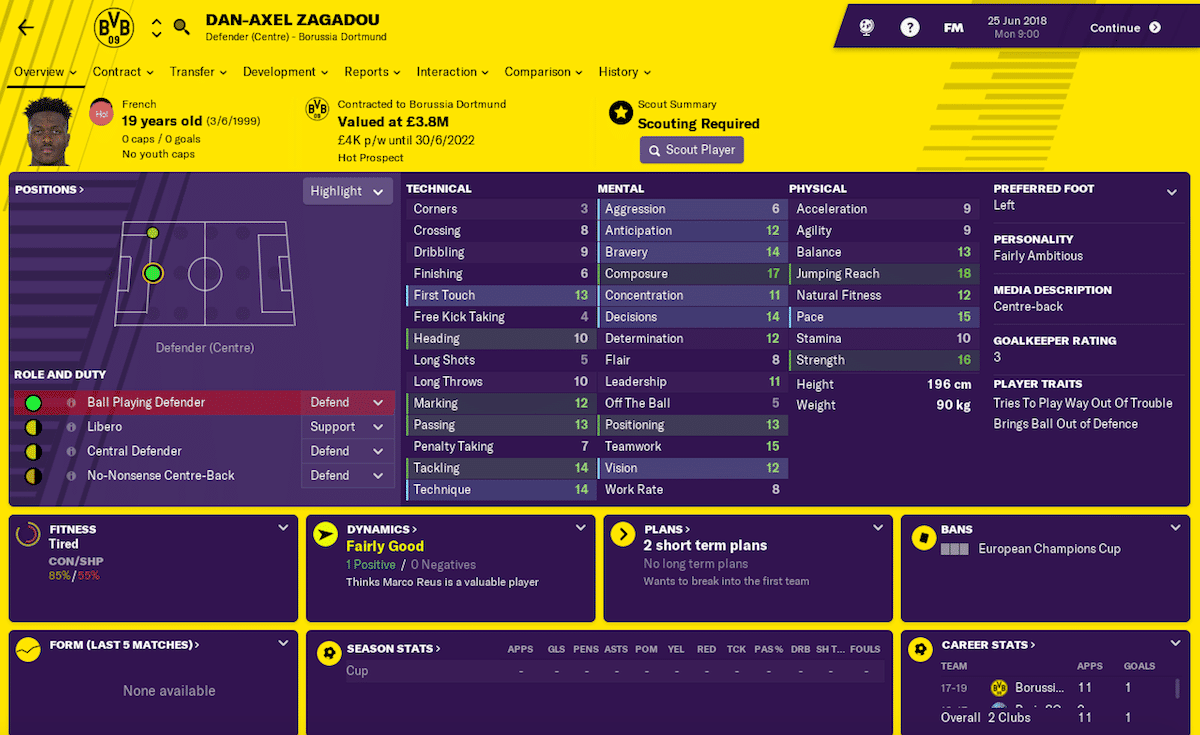 Borussia Dortmund are never short of a quality youngster or two, and Zagadou has the potential to become one of the strongest centre-backs in world football.

The fact he tends to be behind Manuel Akanji and Ömer Toprak when you begin your save also mean BVB are willing to sell the youngster for around £20million prior to the 2018/19 campaign geting underway.

You can negotiate his wage to a manageable £40,000 a week and his signing on fee and agent's fee can also be brought down.

Given his age and his potential, Zagadou should prove a wise and cost-effective signing. 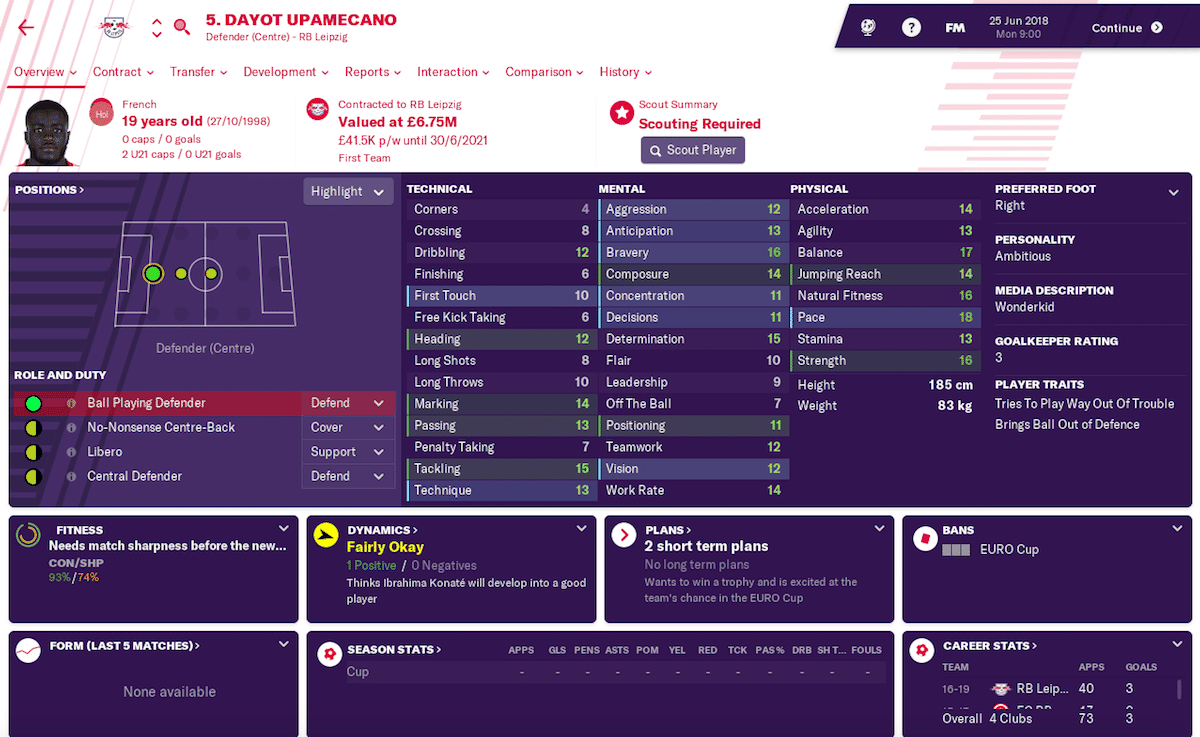 Buy low, sell high. That is RB Leipzig's transfer ethos. And it's why the German club has several talented young players.

Upamecano is one of the best, however. Still only 19 years old, the Frenchman has established himself in the heart of the German side's defence. Quick, strong and comfortable with the ball, he has all the traits needed to become one of the most complete central defenders on FM19.

It's why RB don't allow him to leave unless you pay around £50million. However, wage demands of around £50,000 a week does make the transfer fee easier to swallow.

The pathway from Brazilian football to Portuguese football is one well-trodden by countless players and Porto have certainly made the most of it over the years.

And in versatile defender Militão, the Portuguese side have another wonderkid on their hands. They have only just signed him so, even if you have a bid accepted, the Brazilian will not be open to negotiations.

But by January – or the following summer – he is happier to discuss terms. You will have to trigger his £45million release clause, however. 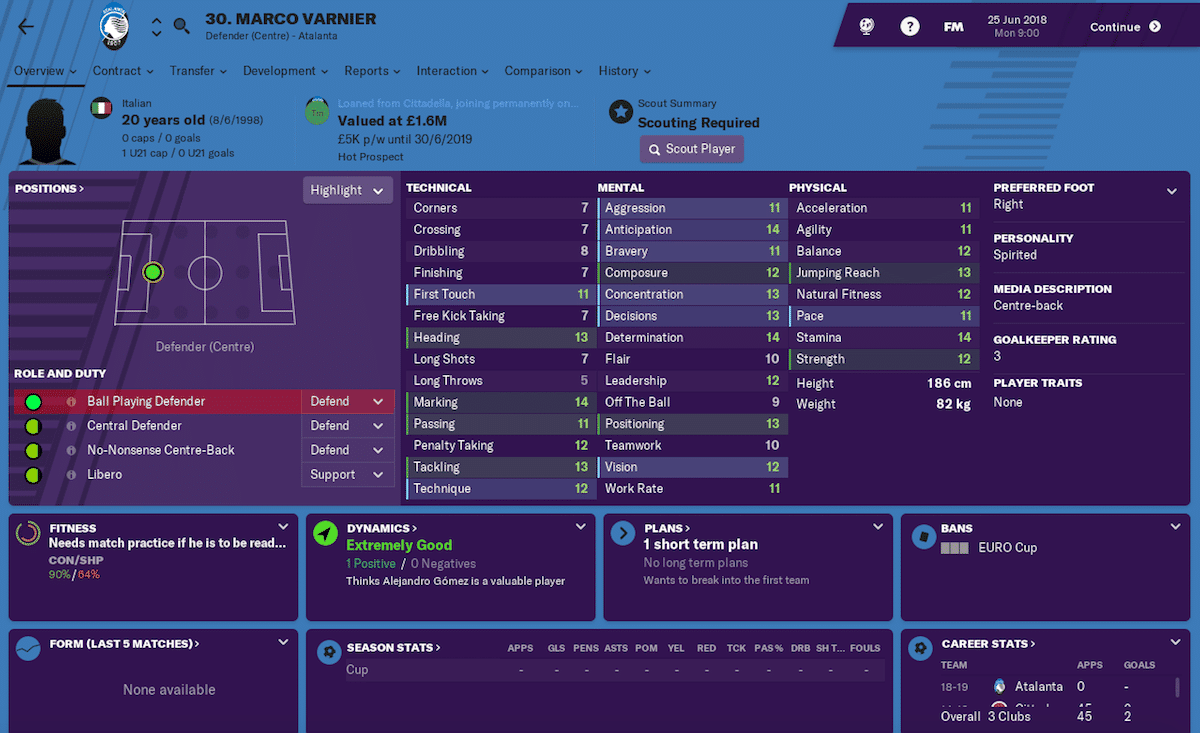 In recent seasons Atalanta have become one of the most exciting sides in Serie A. They also sign very well and have a number of exciting players you should have on your shortlist.

Varnier is one of them. You won't be able to pursue him until the summer of 2019 at the earliest and even then he isn't willing to hold contract talks, having only joined the Serie A side permanently at the start of that transfer window.

But it's certainly worth playing the long game as the Italian has all the attributes required to be the perfect ball-playing centre-back at a top club. 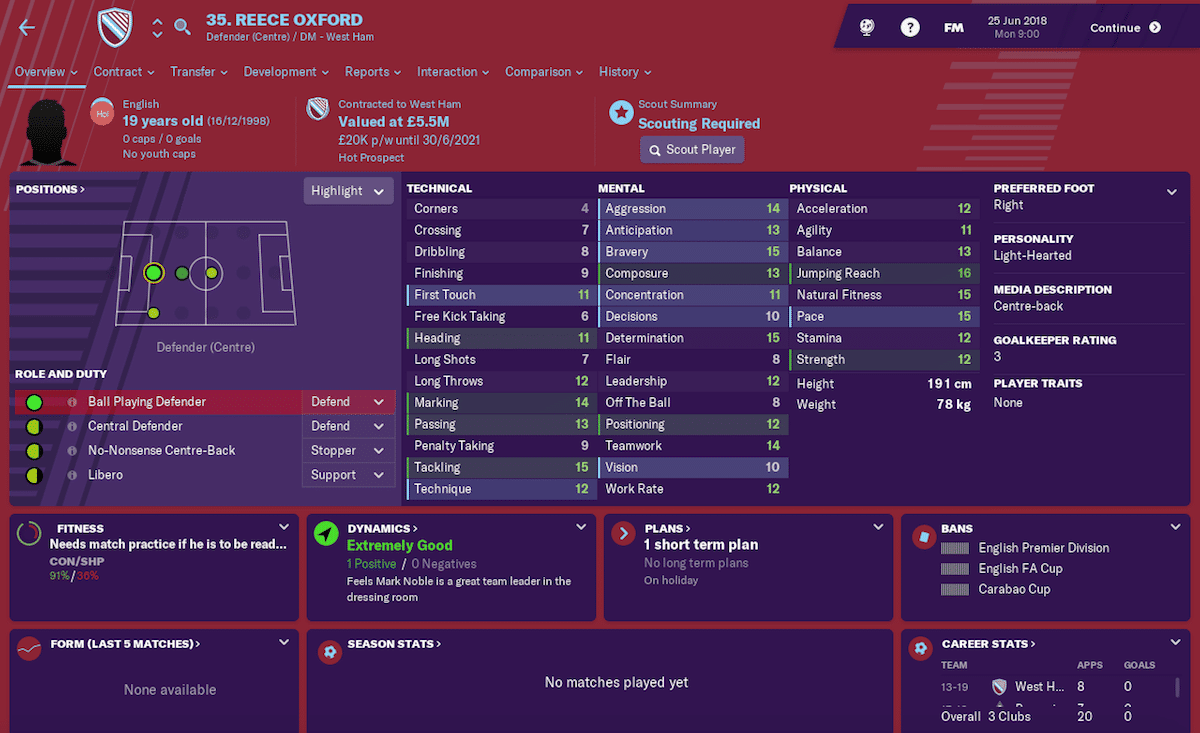 Big things were expected of Oxford when he impressed on his West Ham United debut against Arsenal aged just 16 years old. And while first-team opportunities have been sparse with the Hammers, the club certainly appreciate his potential.

It's why you'll have to pay serious money to take him away from the London Stadium. The Irons will demand a fee above £90million for the defender, which in truth is far, far more than he is worth at that stage.

Even in January, with Oxford in the club's Under-23s, the Irons are not willing to let him go unless you break the British transfer record. So your pursuit of Oxford may have to be a long one. 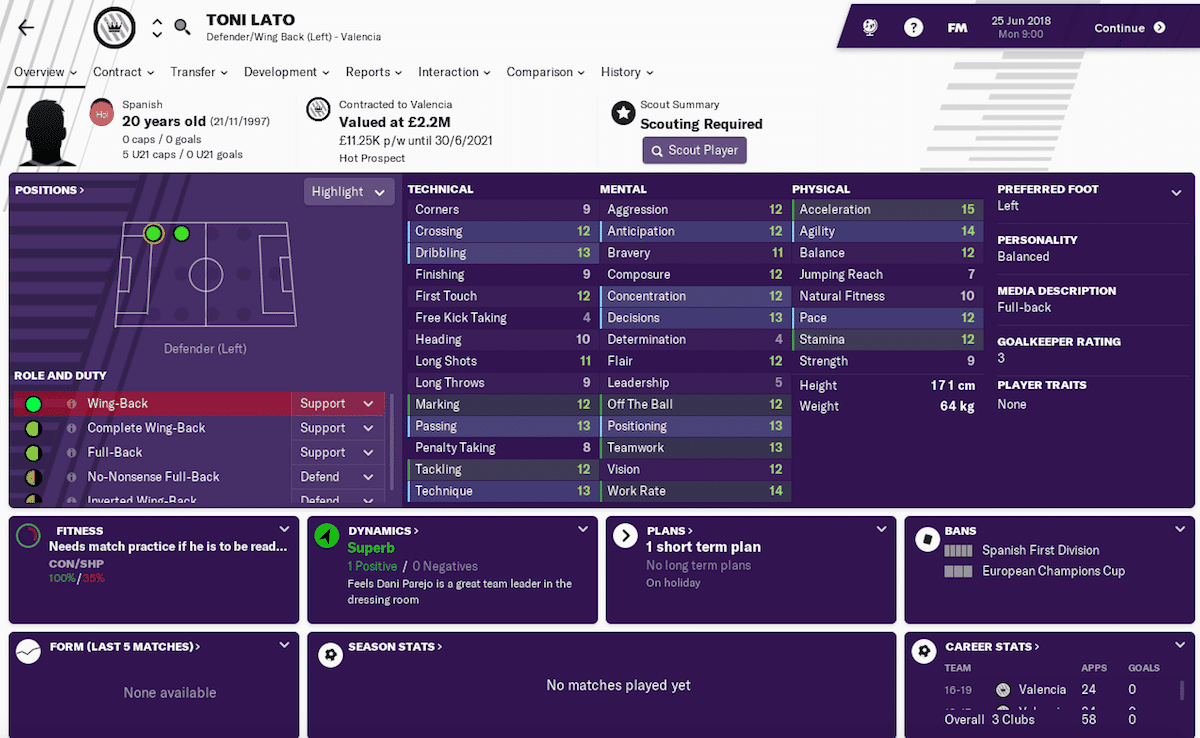 Valencia have an abundance of quality left-backs and none of them come particularly cheap.

Lato is second-choice to José Gayá at the Mestalla but Los Che will not allow him to leave. So you will need to trigger his buy-out clause which stands at £22.5million.

It may seem a little steep but the full-back often signs a new deal before the winter transfer window which sees that clause jump up above £30million.

So it makes sense to move early if you can. 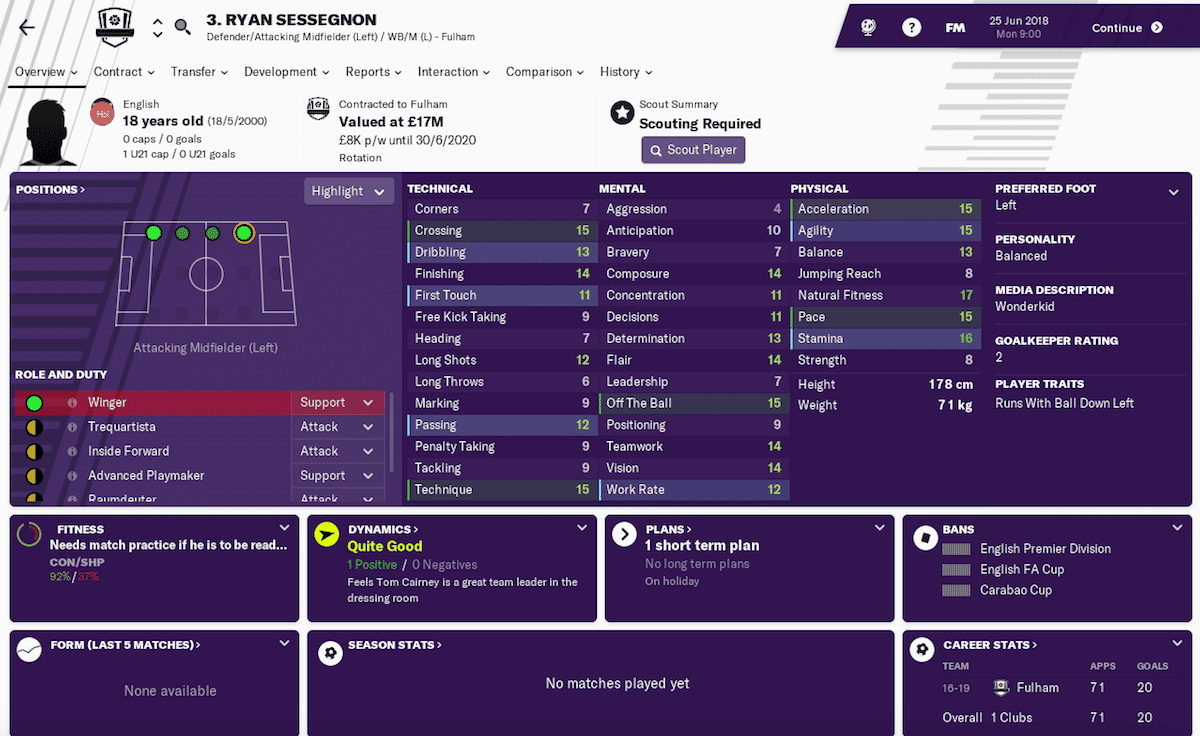 Given what he has already achieved in the game, it's easy to forget that Sessegnon is only 18 years old.

He broke onto the scene as the 16-year-old wonderkid who would take the bus home from matches. Now he is a Premier League regular and is likely to break into the England squad in the next year.

It's why on FM19 Sessegnon doesn't come cheap, you'll have to pay out around £100million to tempt the Cottagers into selling before the 2018/19 campaign gets underway and that hasn't changed in January.

Few clubs have a vast array of left-backs at Valencia and you may decide that Centelles is a more attractive option than Lato.

Centelles isn't willing to leave Mestalla at the start of the 2018/19 season as he only signed a contract in May. However, he is more willing to depart in January and Los Che's asking price will have only increased by a couple of million. 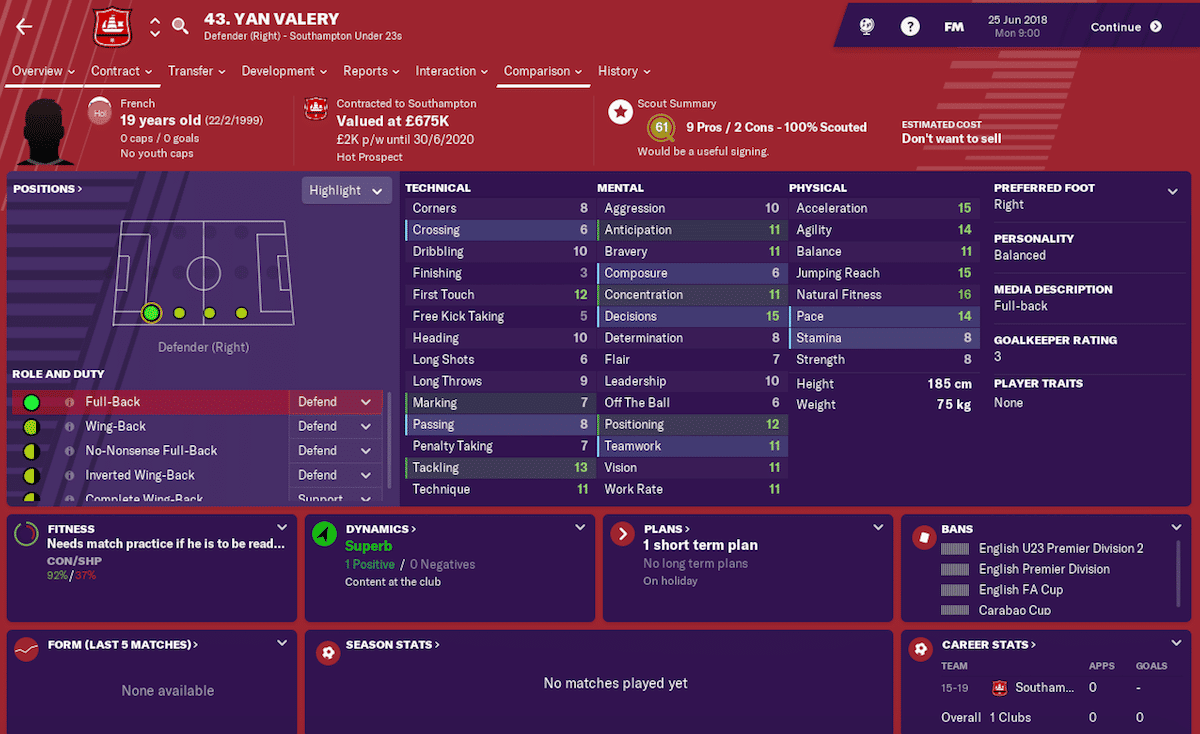 Southampton have a proud history when it comes to developing young players and right-back Valery looks the latest future star to come out of St Marys.

The French defender is in the Saints' Under-23 squad at the start of your save and he isn't often integrated into the first team during the 2018/19 campaign.

Yet Southampton drive a hard bargain. They'll only accept offers above £40million in the summer which, frankly, Valery isn't yet worth.

In January they're just as demanding. So add him to your shortlist and keep track of his development for the future as, initially, the Frenchman isn't yet worth the price it'll cost to take him away from the south coast.