Wimbledon have given themselves a fantastic chance of staying up. Swindon need to buck their ideas up and fast if they're to have any hope. Who will win this one? Find out with our Wimbledon vs Swindon match preview with free tips, predictions and odds mentioned along the way.

Dons to get the job done

Wimbledon might have just recorded back to back wins for the first time in League One this season but they're not safe yet. A home match against a relegation rival, Swindon, that were just beaten by bottom side is a great opportunity to put more distance between them and the drop zone. The Dons have only lost once at home in their last five with Swindon losing three of their last five – including the last two. The confidence levels of the players couldn't be more different given recent results; it should help Wimbledon grab another win.

The nets will bulge

The first of our tips backs Wimbledon to win. We think it will be an entertaining game too with at least three goals in it. Wimbledon have averaged 2.8 goals per game at home with Swindon's away matches seeing a league high of 3.2. Recent form doesn't suggest a drought is on the way either; Wimbledon have scored eight in their last two whilst Swindon's last duo of matches have seen a combined six goals. More of the same? That's the prediction we're making.

With Wimbledon starting to get amongst the goals of late it means their leading scorer, Joe Pigott, should find a few chances fall at his feet. The 15 goal striker has scored in two of Wimbledon's last three wins and whilst he didn't find the net last time out reports show he was a handful. If he can produce a similar level of performance against Swindon then he will expect to find the net.

Relegation turning to reality for Swindon

Wimbledon have given their a ambitions of staying in League One a serious boost with their last couple of displays. Whilst the Dons are scrapping for their life, Swindon almost looked like they'd accepted their fate against Rochdale. It's hard to believe they won't have some form of reaction on Saturday. What will that mean? Well, hopefully, a good game.

Wimbledon vs Swindon: A final Q&A 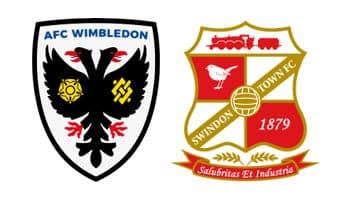