Bristol City are winless from two games in the Championship; will it be third time lucky for the Robins? Find out with our Wigan Athletic vs Bristol City match preview with free tips, predictions and odds mentioned along the way.

Wigan's wait for a win to continue

Wigan have been a difficult team to beat; although they are coming off a loss, that was their first loss in eight matches. It's worth noting, however, that Wigan have no wins since the start of the season; they've played three games in all competitions so far, with two draws and a loss. Bristol City, on the other hand, have four wins in their last seven games, with a draw and two losses; this includes a comfortable 4:1 win in their last match. Also, Bristol City have fared well against Wigan in the past; they lost just once in six clashes between these teams, with three wins and two draws. With this in mind, we don't think that Bristol City will lose this match.

Both teams have been involved in a lot of low-scoring games in recent weeks. Wigan Athletic failed to score in three of their last five games, whilst keeping two clean sheets in that stretch; four of those games went below the 2.5 goal margin. We should also point out that Bristol City kept four clean sheets in their last seven games; five of their last eight games saw less than three goals scored. All things considered, we shouldn't expect too many goals in this match.

With both teams still winless, will someone bank their first three points here?

Whilst most fans would have had these two sides down as Championship strugglers this season it is fair to say the squad and staff of the respective clubs would have held higher ambitions. We're not saying those targets won't be achieved but the sooner the first win arrives the better; as yet, both are winless.

Wigan Athletic suffered their first loss of the season at the hands of Fleetwood Town a couple of days ago; prior to that loss, they were unbeaten in seven games, with four wins and three draws. Leam Richardson's men have drawn two of two league games so far; they'll hope to get their first win of the season today.

Bristol City are coming off an impressive 4:1 win at Coventry, in the Carabao Cup; unfortunately, they haven't had the same results in the Championship, having lost two from two games so far. Nigel Pearson's men will have to get past Wigan if they intend to get their first points this campaign; they'll hope to get some momentum going by winning this match.

A quickfire FAQ on Wigan Athletic vs Bristol City 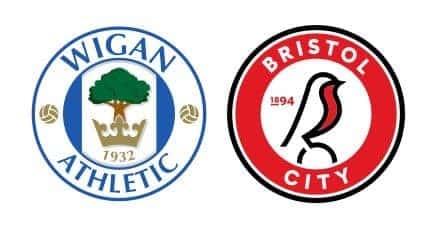