Whatever Happened To The Heroes? Wimbledon’s FA Cup Winners

“The crazy gang have beaten the Culture Club,” proclaimed John Motson at a sun-soaked Wembley in May 1988 as the footballing world witnessed one of the greatest upsets in the FA Cup’s long history; but for Wimbledon, not only was lifting the famous old trophy the greatest moment since the club was founded, it was to ultimately spell the beginning of the end.

That final in which Wimbledon, a non-League club just 11 years before, beat mighty Liverpool 1-0 to deny them the double is still seen as one of the greatest David and Goliath moments in a tournament that has a proud history of throwing up surprises.

Wimbledon had enjoyed a meteoric rise in English football, only winning promotion to the old fourth division in 1978 before gaining three consecutive promotions in just four seasons; but although they were an established First Division side at the time, few gave them a prayer going into that final against one of the greatest teams Britain had ever seen.

To appreciate just what Wimbledon were up against that day you have to take a look at their opponents and what they had already achieved going into this game. Boasting a side which featured established names such as Alan Hansen, Steve McMahon and Bruce Grobbelaar Liverpool had also added a number of high profile internationals to their ranks as they looked to regain the title from neighbours Everton.

Following the departure of Ian Rush to Juventus and the decision of player-manager Kenny Dalglish to only play the odd first team game, Liverpool had a new look attack. Replacing Rush was John Aldridge, while alongside him was Peter Beardsley, who signed from Newcastle United for a national record fee of £1.9 million and fellow England international John Barnes also arrived at Anfield for £900,000 from Watford.

Liverpool quickly conquered all before them that season, enjoying a record 29-match unbeaten start to the season and finishing as champions with just two defeats from 40 league games and a nine-point gap between them and runners-up Manchester United – a win at Wembley would secure them their second double in three seasons, something that had never been done previously.

Wimbledon, on the other hand, were derided by many for their style of play, despite taking a number of high profile scalps on their way to the cup final and finishing 7th in their second season in the top flight. They had pioneered a brand of football that was politely labelled “Route One” by the press. Its philosophy was simple – why try to string 25 passes together in an attempt to get the ball in the opponent’s penalty box, when one will do? 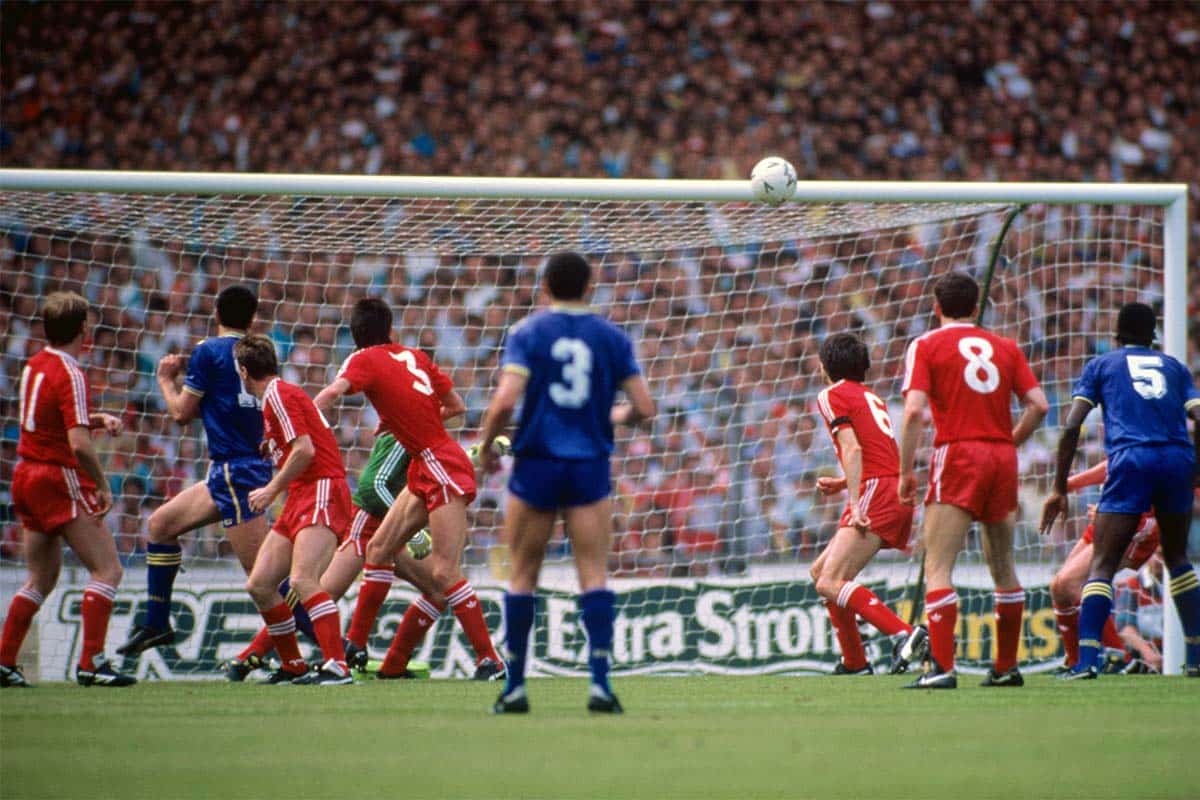 So when the two faced each other on a blazing hot day under the old national stadium’s twin towers it was never going to be a meeting of minds. Wimbledon weren’t just there to make up the numbers though and TV footage from the tunnel that day showed snarling Dons players revelling in their status as huge underdogs and from the very first whistle it was evident they would do anything it took to unsettled their far more sophisticated opponents.

A bone crunching challenge from hard-man Vinnie Jones in the early stages set the tone for things to come and left Liverpool’s fierce midfielder Steve McMahon in a heap, though McMahon still managed to leave his mark, just under Jones’s left eye. The battle lines had been drawn. “In the modern game, it would have been the quickest red ever,” claims John Aldridge. “He absolutely went through Stevie.” But it the tackle was all part of a bigger game plan for Wimbledon as Vinnie Jones later explained: “That tackle was planned weeks before. As he turned, I knew he would open himself wide up. I was waiting and the first time he did it, bang.”

Just before half time Wimbledon were awarded a free kick deep in Liverpool’s half and Denis Wise’s cross was met by Lawrie Sanchez whose looping header flew into the far corner of the net. “It was a glancing header,” explained the scorer in the Daily Mail some time later. “I’d had a special haircut for the day and it worked but it was probably the worst goal celebration ever though because Dennis Wise jumped on me and blocked the camera from showing my face.”

Such was the lack of Wimbledon supporters inside Wembley that day the goal was greeted with a stunned silence; but being unpopular was what the “Crazy Gang” thrived on and they now had something to defend and fancied their chances of repelling everything that Liverpool were about to throw at them.

The Reds pushed hard for an equaliser after the interval but were unable to carve many clear-cut openings against a stubborn Wimbledon defence; but when John Aldridge went down under challenge from Clive Goodyear on the hour mark and referee Brian Hill somewhat generously pointed to the spot it seemed normal service was about to be resumed. 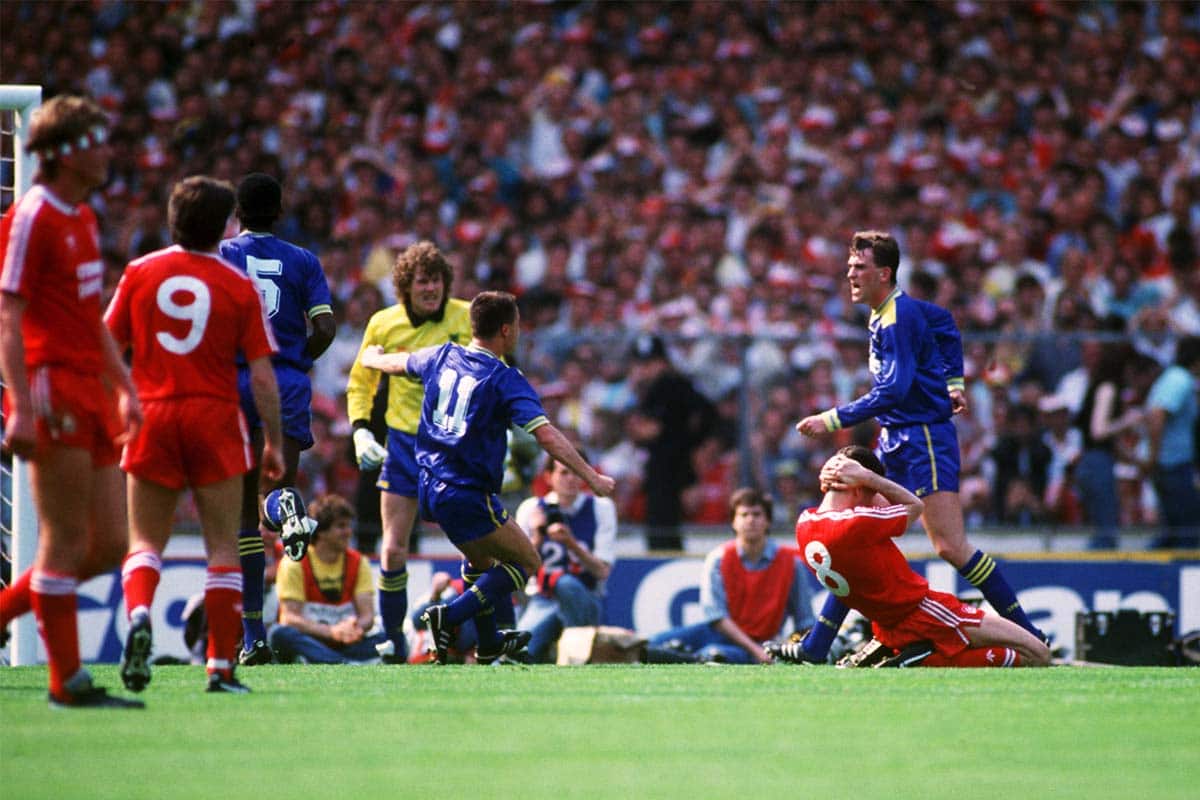 Dave Beasant had other ideas however and wrote his name into folklore by sprawling full-length to keep out what would have been Aldridge’s 30th goal of a magnificent season and in the process became the first man to save a penalty in the FA Cup final.

“Even at the time no one thought it was a good decision,” explained Beasant. “The players were running around, devastated, and as captain I'm running around after them, trying to calm them down. It was boiling hot, and that was probably the most energetic thing I had to do all day. I remember standing on the goal line before the penalty, panting. Aldridge did exactly as I'd expected, I flung myself to my left and pushed the ball away. That was the moment when I thought, they're not going to score today.”

As the game wore on it looked more-and-more likely that despite nine months of champagne football Liverpool’s season was destined to finish in disappointment and when the final whistle sounded, the team that many had seen as no more than plucky no-hopers held on to secure a famous victory in the truest of giant-killing traditions.

But as the Wimbledon players and the handful of their supporters celebrated the club’s first and only major trophy those watching didn’t realise that this most unlikely bunch of heroes would be enjoying their last moments together as a team.

Until now Wimbledon had been seen as something of a joke, a novelty act to be sneered at rather than taken seriously as the collection of winners they had now become; but by beating the best team in the land at the time on a worldwide stage many of their key players would now be on the radar of some of the top teams in England.

Wimbledon’s most unlikely stars suddenly saw their stock rise after the 1988 FA Cup triumph and the very footballing world that had until then condemned the aggressive mentality of Wimbledon FC, now  proceeded to pick apart the team at the first opportunity. In fact, Dons boss at the time claims that just moments after the greatest moment in the club’s history, chairman Sam Haman said to him: “This is the best time to sell out players, sell them now.” Something Haman disputes. 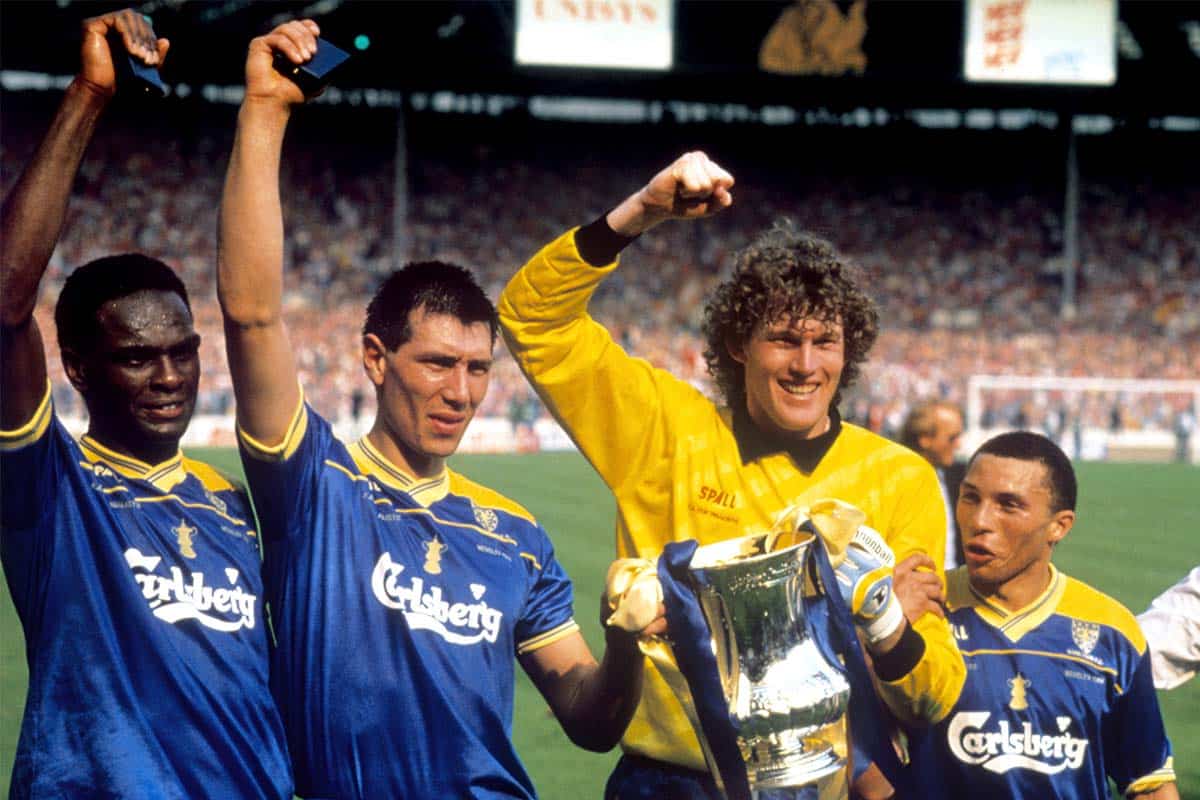 So what of the key-men that were responsible for one of the biggest giant killings in FA Cup history? Though the club would continue to be known as the “Crazy Gang” in the years that followed, it was seen more as a marketing move due to the fact that the core group of players that had earned the moniker had all gone their separate ways.

The 1988 FA Cup final was the last game that penalty hero Dave Beasant played for Wimbledon, a month later he was sold to Newcastle United for £850,000 – a national record for a goalkeeper at the time while Andy Thorne also joined him at St James’ Park for £650,000. Beasant would later go on to join Chelsea and become England’s third choice goalkeeper in the 1990 World Cup.

Hard man Vinnie Jones capitalised on the high profile image he had cultivated and would later sign for Howard Wilkinson at Leeds United for £600,000, before joining up with his former ‘keeper Beasant at Stamford Bridge prior to seeking fame and fortune in Hollywood.

Chelsea was also where Dennis Wise found himself plying his trade following a £1.6 million move, while full-back Terry Phelan was sold to Manchester City for £2.3 million and the quiet man of the side John Scales signed for Liverpool in a deal worth £3.5 million.

The reality was that winning the FA Cup was not only the best thing that happened to Wimbledon Football club, it would ultimately be the worst too. After leaving their Plough Lane home the club struggled to attract crowds at Selhurst Park having agreed to ground share with Crystal Palace while they looked to find a permanent home and in 2000 the club were relegated from the Premier League and soon entered administration before re-locating to Milton Keynes under the new guise Milton Keynes Dons.

“We were scum, we were nothing,” claimed Vinnie Jones looking back at that famous day in 1988. “For us to win it was the biggest travesty for football.” And despite the subsequent decline in the club’s fortunes since, nobody can take away the fact that a bunch of angry young men who thrived on defying all the odds had left their mark on the world’s greatest cup competition in the most remarkable way – even if it had come at a cost.