Norwich already know their Premier League fate and West Ham are bound to be tired following their midweek trip to Germany, all of which could make for a dull game at Carrow Road on Sunday. The Hammers are unlikely to finish any higher than 7th but a strong end to the campaign could see them challenge Man Utd for 6th spot, while relegated Norwich are merely playing for pride in their remaining matches.

We're expecting a low-scoring and potentially boring game between these two clubs both of whom are bound to be low on morale. Under 2.5 goals have been produced in four of the pair's last seven competitive and non-competitive encounters with West Ham claiming a 2-0 win in the reverse fixture back in January. Three of Norwich's and three of West Ham's last five outings in league and cup have witnessed fewer than three goals scored, adding further weight to our prediction.

None of the last three league meetings between Norwich and West ham saw both teams score and we're predicting that, at most, one team will get on the scoreboard this weekend. Just two of Norwich's last six fixtures produced goals at both ends of the pitch with the Canaries failing to score in three of those matches. Each of West Ham's last three away games only saw one team score, with the Hammers failing to score in their last two away games against Chelsea and Frankfurt.

West Ham looking to bounce back after European defeat

Norwich were away at out-of-form Aston Villa last weekend where a goal from Watkins handed the home side the lead just before the interval. Norwich huffed and puffed but never really looked like getting back into the game and Aston Villa confirmed their victory in stoppage-time via a Danny Ings goal.

West Ham played host to Champions League-chasing Arsenal in their last league game but with one eye on their upcoming Europa League semi-final, it was always going to be a challenge to get a positive result in both games. The Hammers went behind to a Rob Holding header in the 38th-minute but got back onto level terms before the break after a neat close-range finish from Bowen. However, another header, this time from Gabriel, proved the host's undoing as Arsenal did just enough to claim a narrow 2-1 win.

Norwich: Idah, Omobamidele, Zimmermann, McLean, Sargent and Kabak could all miss out on Sunday due to injury.

West Ham: Benjamin Johnson and Angelo Ogbonna are the main injury concerns for the visitors. 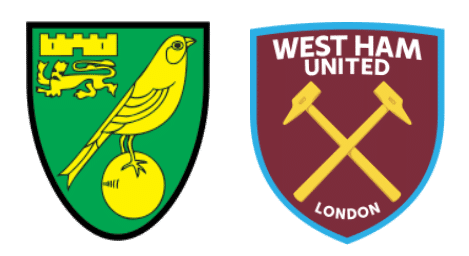