Sam Allardyce looked like he had bitten off more than he could chew when he took the West Brom job but recent performances culminating in that fantastic 5-2 win over Chelsea have the Baggies' fans daring to dream. Southampton have been in poor form of late but back-to-back wins in league and cup suggest they might have turned a corner. Read on for our full match preview for West Brom vs Southampton in the Premier League.

Four of the last seven matches played between West Brom and Southampton have witnessed over 2.5 goals. West Brom's last match away at Chelsea produced 7-goals and saw the Baggies claim a 5-2 win, while each of Southampton's last four games have featured at least three goals.

Both teams have scored in three of the last six encounters between these two sides. The host's last match featured goals at both ends of the pitch, while three of Southampton's last four matches also ended with both teams scoring.

Callum Robinson did his chances of starting for West Brom on Monday night against Southampton no harm after the striker came off the bench to score twice for the Baggies in a 5-2 win over Chelsea. The Irish striker has only started 15 league games this season and is the club's second-top goalscorer behind midfielder Pereira.

Key Stats and Figures for West Brom vs Southampton

A win for West Brom could setup another great escape

West Brom remain 8pts from safety as things stand but that excellent win against Chelsea has given Allardyce's side a glimmer of hope that they can pull off another great relegation escape this season. The hosts have only lost two of their last six matches but still looked poor in the final third until last weekend's clash with Chelsea. Monday's match against the Saints feels like a must-win game for West Brom but the hosts will be without Ivanovic, O'Shea and Gallagher for one reason or another on Monday.

Southampton were made to battle hard for all 3pts at home to Burnley last time out but their fans will be hoping that back-to-back wins in league and cup mean their poor run of form has come to an end. However, the Saints don't have as much motivation for the 3pts when compared to their guests and that could prove to be an issue on Monday night. Obafemi, Romeu and Smallbone remain sidelined but Walker-Peters could return from injury in time to make the trip to the Midlands. 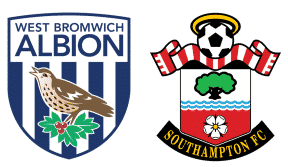