West Brom vs Huddersfield: Check out our betting tips

Huddersfield look nailed on for a top six finish whilst West Brom's playoff hopes are hanging by a thread. Can the Baggies grab a win here? Find out with our West Brom vs Huddersfield match preview with free tips, predictions and odds mentioned along the way.

Baggies to grab back to back wins

On longer term form this game screams out as an away win but we can see West Brom taking maximum points. The Baggies got a monkey off their back last time out by winning their first game under Steve Bruce. On top of that they have home advantage in this match and have also had a couple of extra days recovery compared to Huddersfield. The Terriers spent their midweek losing to Nottingham Forest in the FA Cup. You can then factor in that it's imperative West Brom win this game or their season is basically over and look to the last time they hosted Huddersfield; the Baggies won that game. There are plenty of signs West Brom could take a positive result.

Our second tip for this game is an under 2.5 goals prediction from the total goals market. West Brom have seen just two of their last ten games go beyond two goals. Huddersfield meanwhile have seen six of their past 10 come up short of the 2.5 mark. As for game averages, they both stand up to the under 2.5 bet too. Huddersfield have averaged 1.9 across their past 10 with the Baggies coming in at the same level – again 1.9. Surely, goals won't rain down?

Both of these teams have promotion aspirations right now but they look much more realistic for Huddersfield. West Brom meanwhile are in must win territory.

West Brom might be in a period where they simply have to get wins but the mood around the Hawthorns will have been much brighter after they won at the weekend; it's amazing what difference a bit of confidence will do and another victory here would feel like real momentum.

Huddersfield saw their long unbeaten run come to and end against Nottingham Forest; the saving grace being it was a cup game. They'll hope to keep their good league form going here and, if they do, they'll probably end West Brom's chances of making the top six. 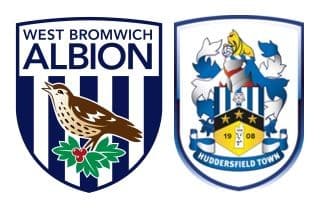