At the start of the season, West Brom were fancied for promotion and Blackpool were tipped for the drop. It hasn't worked out that way though with this game a dead rubber. Who will win? Find out with our West Brom vs Blackpool match preview with free tips, predictions and odds mentioned along the way.

Firstly, we would like to point out that Blackpool have struggled to win games on the road; they managed just one win in their last 12 away games in all competitions. In fact, Blackpool have played 19 road games in the Championship, and they won just four of those games; it's also fair to mention that Blackpool have no wins in their last three games. On the other hand, West Brom have been a very solid team at home this season; they lost just three of their 20 home games, with 10 wins and seven draws. Considering how West Brom play at home, and how Blackpool play on the road, West Brom should be able to win this match.

West Brom have not had too much trouble scoring goals, as they did so in six of their last seven games; conversely, Steve Bruce's men have conceded their fair share of goals. West Brom have seen their defence breached in seven of their last 10 games. Like West Brom, Blackpool have been consistent in terms of scoring goals; they found the back of the net in 17 of their last 19 games. Again, like West Brom, Blackpool have conceded some goals recently; they allowed six goals in their last three games alone. It's also important to mention that both teams scored in five of the last six meetings between these two; with this in mind, both teams should score.

West Brom vs Blackpool: Let's look at the predicted lineups

Back in August neither of these sides would have expected this game to count for nothing with almost everyone expecting these sides to be competing at opposite ends of the table. Instead though, this match is all about finishing the season well to ensure next season starts without a hangover.

West Brom are coming off a disappointing 3:1 loss at home against Stoke City; they have not had the best form lately, having won just one of their last four games. Steve Bruce's men will go up against a struggling Blackpool side; they'll hope to bounce back from their recent loss with a win here.

Things have not gone too well for Blackpool the past couple of weeks; they are without a win in their last four games, with two draws and two losses. Neil Critchley's men will take a trip to The Hawthorns Stadium in a bid to snap their winless streak; will they do enough to take all the points?

A quickfire FAQ on West Brom vs Blackpool 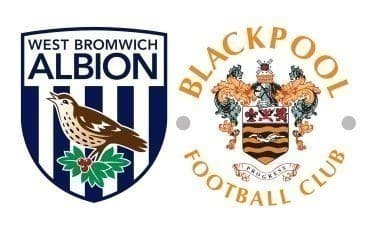