“I was rich, unbeatable and pampered – the handsome playboy who thought he could do what he liked, a kind of happy-go-lucky man about town.” That was Walter Zenga’s description of himself and, if he had added that he was once the best goalkeeper in the world, it would be a wholly accurate assessment.

Born in Milan and a life-long Inter fan, he spent 23 years with the Nerazzurri before becoming something of a nomad, playing for six other clubs and having now coached no fewer than 15 sides since retiring. Yet on the field, he was an incredible shot-stopper and among the finest ever to grace Serie A and the Italian national team. 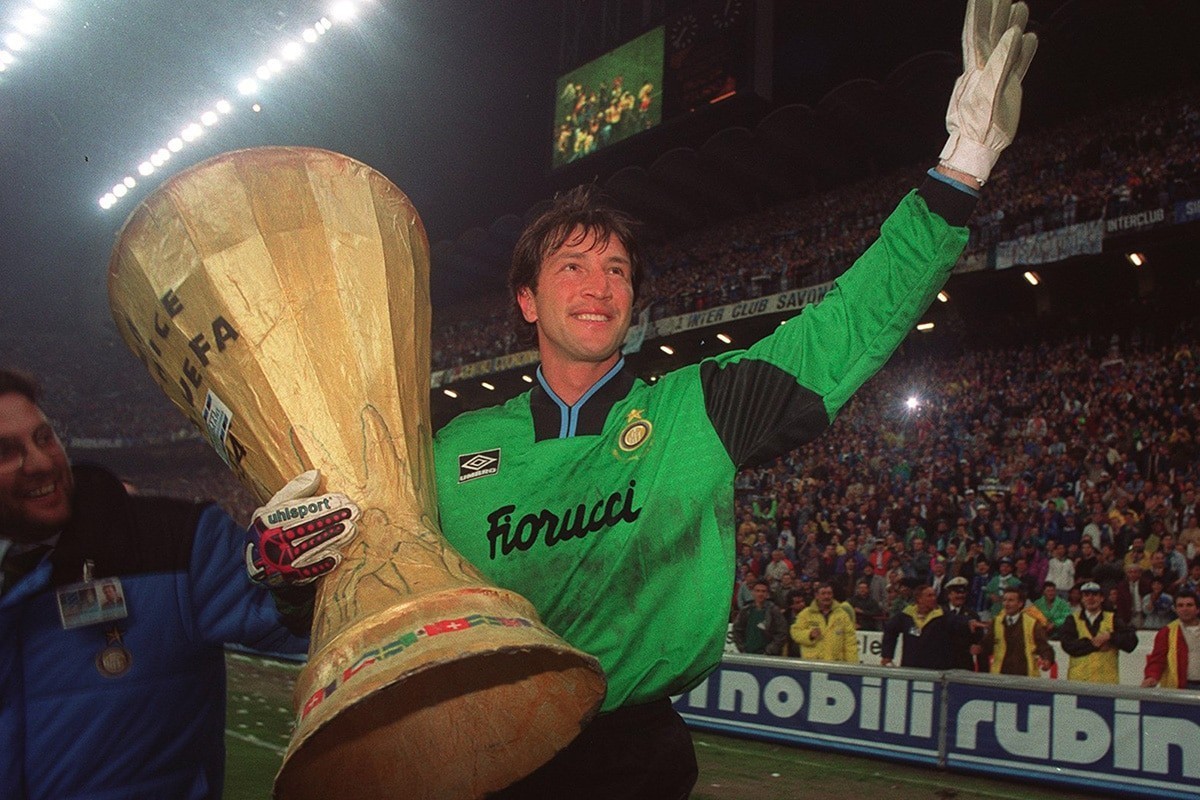 At just 6ft 2in, Zenga was never the tallest goalkeeper and would certainly be considered short for the role today. Yet he possessed an athleticism that was unparalleled throughout the 1980s and early 90s.

An extrovert, he was superb in one-on-one situations and did a remarkable job of marshalling the defence ahead of him. He always did so in the most dramatic fashion, his ability as a showman rivalling his work between the posts. He certainly enjoyed a flamboyant lifestyle away from the pitch.

Zenga's ability saw off all his rivals of that era, establishing him as first-choice for both Inter and the Azzurri, keeping Stefano Tacconi as a largely unused sub despite the Juventus man’s evident ability.

Joining the Inter youth sector aged ten, Zenga was sent on loan to Salernitana, Savona and Sambenedettese before 1982. A year later he became a mainstay in the starting XI and remained at the club until 1994.

Zenga made 473 appearances for the Nerazzurri, enjoying a hugely successful tenure with his beloved side. He played a central role in helping Giovanni Trappatoni’s men to clinch the 1989 Scudetto and the Supercoppa in the following year.

He also won the UEFA Cup in 1991 and 1994, while his performances saw him named Serie A Player of the Year in 1987. Beppe Bergomi knew him better than most, playing as a centre-back for both Inter and Italy, and said he “could’ve willingly throttled his defenders every time we conceded!”

There was great excitement in Italy as the nation prepared to host the 1990 World Cup. The hosts were contenders thanks to a talent-laden squad that boasted Franco Baresi, Paolo Maldini and Roberto Baggio. Their dreams were fueled further by the presence of Zenga, who was in stellar form as the tournament began.

Over the next four matches, Zenga would underline his credentials as the finest goalkeeper in the world, a player fully deserving of the “Spiderman” moniker that had been bestowed upon him. Protected by a superb defence but seemingly unbeatable whenever opponents finally did manage to take a shot at his goal, nobody scored past the Azzurri as they marched into the semifinals.

He had saved them time and again in the capital. Now Italy were forced to travel south, taking on Diego Maradona and Argentina and the Stadio San Paolo in Naples. The No.10 called upon his fans to turn their backs on the home team and cheer for him. The game was played in a highly charged atmosphere.

“It affected us,” Zenga said later. “In Rome the whole stadium did not care whether they were Roma fans, Lazio fans, Inter fans or Juventus fans. It was complete support, all 90 minutes. Then we arrive in Naples, Maradona says a few things, and the atmosphere changed…”

So too did Italy and Zenga. After taking the lead through Schillaci and with a clean sheet record that now stood at 517 minutes, Claudio Caniggia pounced to level for Argentina, somehow beating the goalkeeper to the ball as he attempted to collect a cross.

The game eventually went to penalties. Roberto Donadoni and Aldo Serena missed from the spot as Argentina triumphed and ended Italy’s dream of glory.

“After something like that, you feel like you want to take a gun and shoot yourself,” Zenga said in a 2014 interview. “When we arrived in the locker room, nobody talked for 20 or 30 minutes. Nobody said anything and there was just this big silence, a silence that was much louder than any big noise. That’s the silence of a game lost, the invincible team that had lost something.”

Sadly it is that silence, that unfulfilled promise of a World Cup triumph which shapes the memory of Zenga’s career. But it should not be forgotten just how imperious he was at his peak. A fine goalkeeper and one of the all-time greats, he ranks number four on this list even with that tainted vision of what might-have-been.