July 9, 2006 and it’s deep into the evening in Berlin. The streets around Westend and in surrounding Charlottenburg-Wilmersdorf are deserted, though the magnificent Olympiastadion is full as Italy and France contest the World Cup Final.

Margins are thin as the tie between favourites France and the dogged Italians enters extra time where Zinedine Zidane is about to plant the headbutt that would stop both Marco Materazzi and the watching world in their tracks. 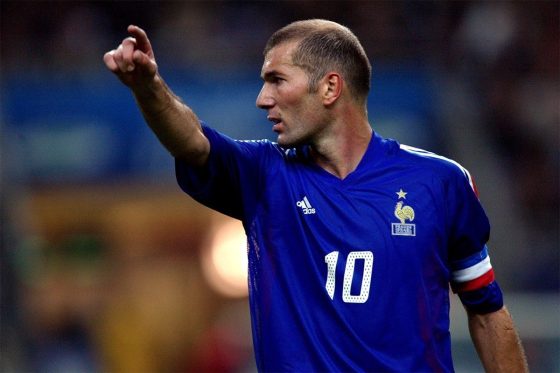 In the 110th minute of the 18th World Cup Final and the dramatic seconds that would follow, legendary midfielder Zinedine Zidane – the three-time FIFA World Player of the Year – would endure his last moments as a professional footballer, ending a sparkling career with the moment of madness that would overshadow everything that came before it.

Before the 2006 World Cup in Germany, Zinedine “Zizou” Zidane had made his intentions to hang up his boots after the tournament public following an injury-stricken 18 months or so beforehand.

Speaking to French outlet Canal+, he said: “It's my decision and it's final. After the World Cup, I will stop playing football. The World Cup is my last goal. That's the only thing I want to focus on. I want people to be in the know before the World Cup.”

Zidane was 33 when he was named in a French squad for the last time by coach Raymond Domenech, though he would turn 34 during the tournament, indeed, Les Blues would play on Zizou’s birthday on June 23rd, though he wouldn’t be involved.

Zidane had just finished his fifth and final season with Real Madrid in Spain, though the 2005/06 season was one of disappointment and the playmaker's desperate aspirations to end his club career with silverware were denied. 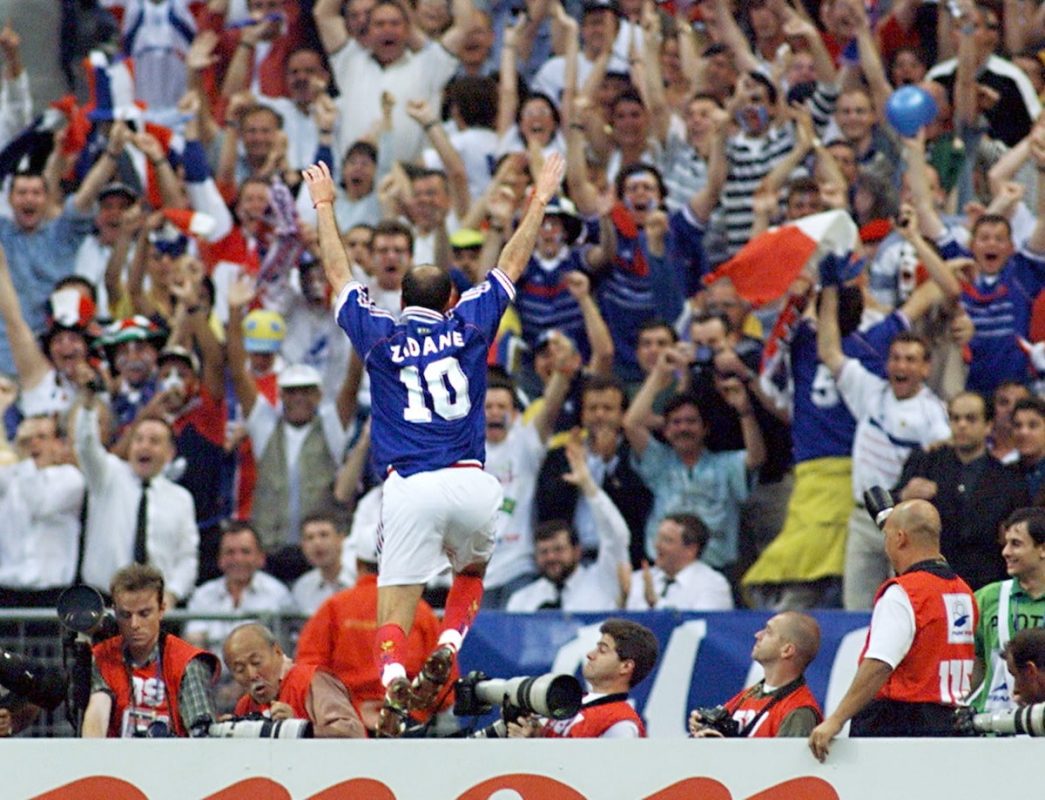 Los Blancos finished second in La Liga behind bitter rivals Barcelona and they were ousted over two legs in the Copa del Rey by Real Zaragoza. In the Champions League, they were knocked out by Arsenal in the Last 16 in March, ending Zidane and Real’s hopes of success on all fronts.

Indeed, the tail end of Zidane's club career was littered with frustration. He was a key member of the famous Real Madrid Galacticos team, though that collection of world-beaters had peaked four years prior. Zidane hadn't had his hands on a major trophy since the Los Blancos' La Liga win in 2003 and he won the Champions League just once, 12 months before that in 2002.

The World Cup in Germany then, was to be Zidane’s last chance of ending a distinguished career with a fitting swansong.

France were FIFA's top-ranked team from Europe in 2006, but even though they topped the UEFA qualification group they shared with Switzerland, Israel, Republic of Ireland, Cyprus and Faroe Islands with an unbeaten record, performances weren't convincing.

Les Blues scored just 14 times in ten fixtures during their qualification surge and they drew 50% of their games. Zinedine Zidane scored just once himself, notching in the final round of fixtures against Cyprus in Saint-Denis.

The crux of the squad that won the 2000 European Championship was still being held together as Raymond Domenech attempted to squeeze every last drop out of a powerful generation of performers.

Domenech would lean heavily on experience at World Cup 06, indeed, he named the team with the highest average age (30.8) in the entire tournament in a group game against South Korea.

As captain of this gang of hardened pros in the twilight of their professional journeys, Zidane would have almost certainly felt an extra element of pressure as he led a collection of waning stars into battle for the last time, all of whom were desperate to write exciting closing chapters.

France opened their Group G campaign in Germany on June 13 against familiar foes Switzerland in Stuttgart – a team they had twice failed to beat in qualifying – and sure enough, Les Blues toiled again against Köbi Kuhn’s well-drilled unit.

The spoils were shared following a dour 0-0 draw in what was a contest of half-chances and near-misses for both. Five days later on June 18, Les Blues slipped up again, this time against an energetic South Korean side in Leipzig.

France established an early advantage through Thierry Henry after nine minutes after a shot deflected into his path fortuitously, though in a moment of sporting symmetry, Ji-Sung Park bundled home a leveller with just nine minutes to play.

That point put the Asians in command in Group G, though matchday three would turn the section on its head. Switzerland beat South Korea 2-0 in Hannover to claim top spot, while France saw off tournament debutants and former French colony Togo by the same scoreline in Cologne. 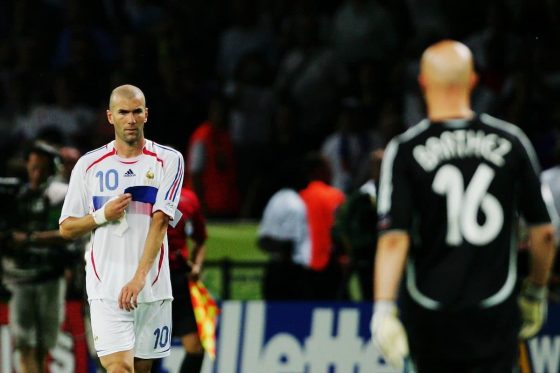 France needed to win by two goals to confirm their passage to the knockout rounds -a feat they just about managed, eventually. Patrick Vieira fired the French in front with a powerful finish after 55 minutes and the midfielder set up Thierry Henry for a second just six minutes later.

Zidane was unable to feature in the crucial fixture on his birthday due to his suspension. Zizou picked up yellow cards in each of his first two appearances at World Cup 06, resulting in his ban for game three.

The midfielder was also subbed off late on against South Korea and reacted angrily to Domenech’s decision as he left the pitch, fuelling rumours that a rift had developed between the pair.

Domenech insisted everything was rosy in the aftermath, saying: “It’s pure speculation, it’s been two years now that you’ve talked about that. Do you want me to make something up in order to tell you the opposite? I can’t tell you anymore. Find me a player who’d be happy to leave the pitch with a game hanging like that.”

However, whatever the arguments were to the contrary, Zidane did not seem happy.

France build a head of steam in the knockout rounds

With Zidane back in the fold, France headed to Hannover to play Spain in the Last 16 on June 27, where Zizou would come up against clubmates Iker Casillas and Raul at the WM-Stadion.

La Roja were awarded a 28th-minute spot kick after a clumsy Lilian Thuram tackle which was duly dispatched by David Villa, though Les Blues struck back before the breakthrough winger Franck Ribery, with Patrick Vieira once again the architect.

After a tense second half, Vieira nodded France in front with a stooping back post header in the 83rd, before Zinedine Zidane broke clear to plunder a third in injury time, just a minute after he had been booked again.

Emboldened by their fine victory over a strong Spain outfit, France played with a renewed swagger against an even stronger Brazilian side in Frankfurt in the quarter-finals.

With Ronaldo, Ronaldinho and Kaka the crown jewels in a diamond-encrusted XI, the Canarinho were many peoples pick to lift the World Cup in Germany, but with Man of the Match Zidane pulling strings and weaving patterns, the South Americans couldn’t live with the resurgent French.

Zidane set up Thierry Henry for the game’s only goal with a menacing delivery from a free kick and Raymond Domenech was effusive in his praise of his skipper after full-time, saying: “I think he's playing like this precisely because he is retiring. He can play with freedom and expression because he knows every game could be his last.”

From being labelled as a muddled together bundle of veterans who were too old and past it, France were suddenly formidable and against Portugal in the semi-finals, they were restored as favourites to go all the way.

In the build-up to the game in Munich, French defender William Gallas had warned that the Portuguese would try to “destabilise” France with “little fouls” and “diving, so it was fittingly ironic then that the tussle was decided by a solitary French penalty.

In the 33rd– minute Thierry Henry’s trailing leg was hooked by falling defender Ricardo Carvalho and Zinedine Zidane planted the ball firmly on the spot and then into the corner of the net past Ricardo after a short run-up.

The rest of the game was a bit of a non-event and France pulled from their deep well of big-game knowledge to frustrate a Portuguese team that had a 19-year-old Cristiano Ronaldo in tow.

The Olympiastadion in Berlin was the stage and France vs Italy was the game, though right from the off Zinedine Zidane and Marco Materazzi would be the final’s most prominent protagonists, whose paths would cross at a climactic junction in the city of freedom.

First, a flurry of goals would set pulses racing. Materazzi was punished harshly for a foul on French forward Florent Malouda after just six minutes and after a penalty was awarded by Argentinean referee Horacio Elizondo, Zidane clipped it home with the softest of Panenkas that caressed the underside of the crossbar before nestling in the net.

Just 12 minutes later, however, Materazzi equalized with a header from an Andrea Pirlo corner and from there, under instruction to do so, the giant centre-half got touch tight to Zidane whenever the opportunity arose.

That game of cat and mouse continued right through to the final whistle and into extra time as both teams struggled to penetrate. However, in the 112th minute, while Zidane was jogging back towards midfield following another foiled French attack, the Blues skipper halted for a moment, reacting to a whisper in his direction from Materazzi.

What followed was one of the most inexplicable moments in World Cup and indeed, in football’s history. Taking offence to his marker’s comments, Zidane bent forward and head butted Materazzi in the chest, sending the Italian sprawling to the canvas with all the dramatics of a WWE star on the end of a swinging forearm.

Zidane stood emotionless over the stricken Materazzi like a con resigned to his fate and waiting for a verdict to be handed down, however, it took almost two minutes for the officials to arrive at the right decision. Elizondo had missed the incident and needed help from the fourth official to learn that a red card was required.

Zizou locked Elizondo in a steely gaze for a moment and then moped off the pitch slowly against a backdrop of genuine shock in the stands. Ten-man France held out and took the final to penalties, though they were eventually beaten 5-3 after the Italians failed to miss.

Later Materazzi revealed the contents of football’s most famous whisper and the words that triggered Zidane’s explosive response.

“There had been a bit of contact between us in the area. He had scored France's goal in the first half and our coach (Marcello Lippi) told me to mark him. After that first brush between us, I apologised but he reacted badly.

After the third clash, I frowned and he retorted: ‘I'll give you my shirt later'. I replied that I'd rather have his sister than his shirt.”

Zidane himself has never offered much of an explanation for the headbutt. In 2022, when asked if he had any regrets, he told Telefoot: “I’m not at all proud of what I did but it’s part of my past.”

Though the biggest tragedy of all perhaps, is that Zidane is remembered for his moment of madness at World Cup 2006 just as much as he is for his skill, which seems to me at least, a punishment that far outweighs the crime. 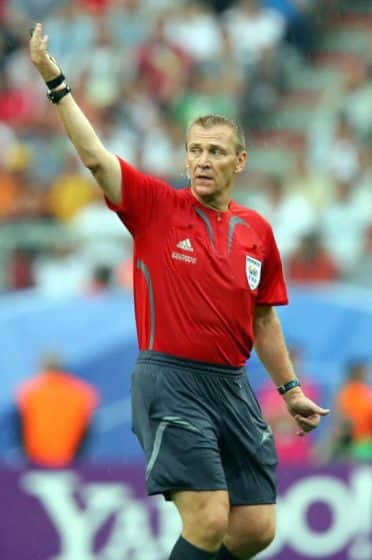