To say the 1986 World Cup had everything would be an understatement. Phenomenal goals were scored, and countless world-class talents were on display. The likes of Canada, Denmark and Iraq were appearing at this stage for the first time, with the iconic Estadio Azteca playing host to a thrilling final. It was also the tournament where the fan-favourite Mexican Wave was brought into circulation.

But above all, it was the tournament where a certain Diego Maradona truly showed the footballing world exactly what he could do with his feet, and indeed with his hands… 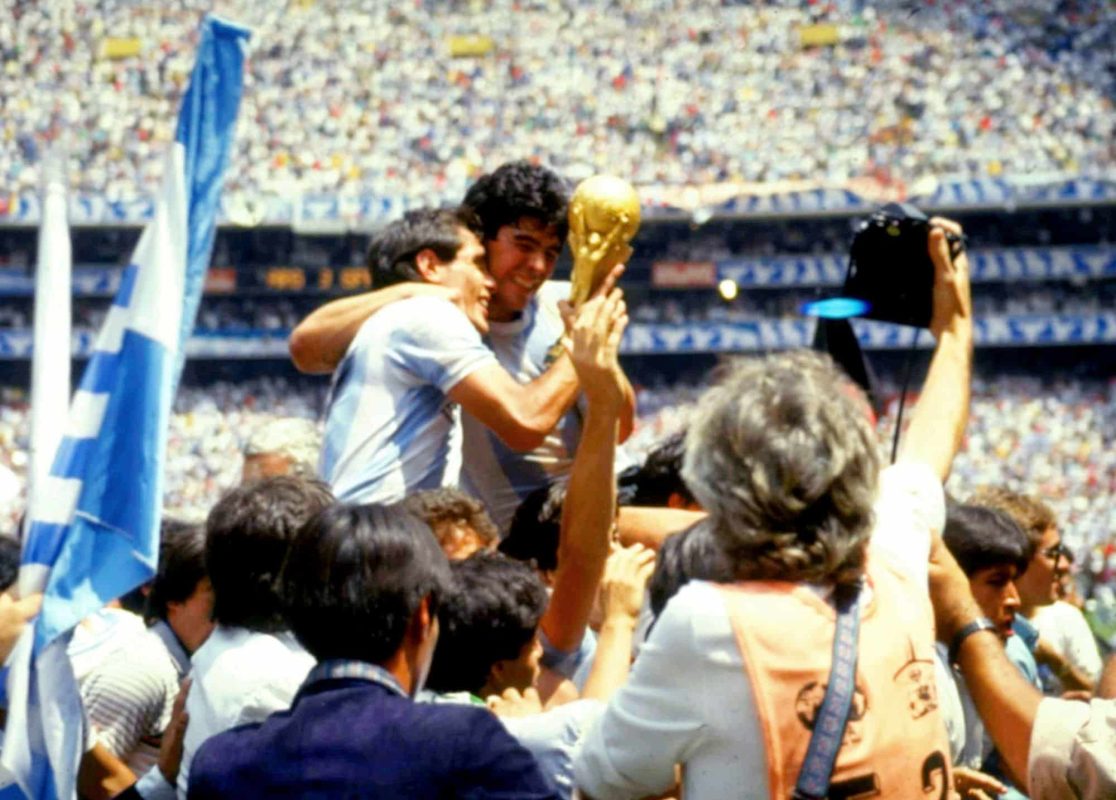 The Argentina man stole the show, producing one of the greatest individual displays in World Cup history. The flamboyant attacker had already made a name for himself for his nation four years prior when he scored two goals in the 1982 World Cup in Spain. His Argentina side, however, could only make it to the second group stage, tumbling out of the competition with losses against fierce rivals Brazil and eventual champions Italy.

But now, Maradona was back in the big time, and importantly adorned the captain’s armband as Argentina searched for their second title, having lifted the famous trophy eight years previously on home soil. Mario Kempes was the hero back then, scoring six goals as the South American outfit went all the way, driven by their boisterous home supporters.

That hero responsibility was now on the shoulders of Maradona, and it’s fair to say that the man from Lanus did not let his country down. Maradona and Argentina were handed a tricky start in their quest for glory, drawn in Group A alongside Bulgaria, South Korea, and the small matter of defending champions Italy. Bulgaria would initiate the 1986 World Cup upsets from the very start with a 1-1 draw against the Italians.

Argentina were determined to avoid a similar fate, and did so quite comfortably with a 3-1 victory over South Korea. Despite not getting on the scoresheet, Maradona was the maestro, helping his attacking teammate Jorge Valdano to a brace, with defender Oscar Ruggeri also on the scoresheet.

Holders Italy were up next, and this time it was Maradona’s moment, but the superstar could only secure a point for his side in a 1-1 draw, after Alessandro Altobelli put gli Azzurri 1-0 up from the penalty spot early on.

The South Americans returned to winning ways shortly after, clinching the top spot in the group with a 2-0 victory over Bulgaria thanks to goals from Valdano and Jorge Burruchaga. Once again, despite not finding the net himself, Maradona dazzled on the pitch, and was already well on his way to becoming the standout player of the tournament.

The road to the final

It was now onto the business end of the competition, and the group winners were tasked with a round of 16 challenge against fellow South American outfit Uruguay. Pedro Pasculli netted the only goal of what was a fiery game at Estadio Cuauhtémoc in Puebla. But it would be the following round’s encounter with England that would involve two of the most memorable moments in the entire history of the competition.

The quarter-finals almost pitted Maradona and Co. against another South American side, but a quietly confident England had eased past Paraguay 3-0 in their round of 16 fixture. It resulted in a highly-anticipated meeting between two old enemies, who were set to continue a rivalry that supposedly started 20 years prior when the nations went head to head in the quarter-finals of the 1966 tournament in England.

Back then, Wembley watched on as Argentina captain Antonio Rattin received a red card in a hugely competitive encounter. The Argentine was, however, unhappy with the decision from German referee Rudolf Kreitlein, while England boss Alf Ramsey went on to describe his opponents as animals, much to their anger.

There were, of course, non-footballing matters mixed in with the rivalry too, with the conflict surrounding the Falkland Islands reaching boiling point in 1982, just four years before the match in Mexico.

The Hand of God and solo brilliance

But football was the main talking point on 22nd June 1986, with the game truly coming to life in the 51st minute when a miscued clearance from England’s Steve Hodge looped into the box that Argentina was attacking. The onrushing Maradona felt this was his chance to seize glory, and he did just that, jumping ahead of English goalkeeper Peter Shilton and knocking the ball into the net with his hand.

While Maradona’s first strike was shrouded in controversy, there can be no complaints about his second, with the Argentina star picking up the ball in his own half before embarking on a mazy run into the England penalty box.

Over a space of 68 metres, the magician carried the ball past four opponents; Peter Beardsley, Peter Reid, Terry Butcher and Terry Fenwick. As analysed by FIFA, he took 11 touches in 11 seconds, twisting and turning through a beleaguered England outfit, finishing the move with a feint past Shilton, slotting the ball into the empty net.

16 years later, as part of the build-up to the 2002 World Cup, Maradona’s magical moment was voted by FIFA as Goal of the Century.

Just four minutes separated the two goals, with England left shell-shocked by both efforts, albeit in entirely different ways. Gary Lineker would pull one back for Bobby Robson’s men with 10 minutes to go, but it wasn’t enough to steal a draw, with Argentina escaping through to the next round by the skin of their teeth.

Seemingly not at all tired from his previous showing, or indeed from the media attention surrounding his now infamous goal, Maradona followed his double against England with a double against Belgium in the semi-finals.

Just 12 minutes separated his two goals this time around, and while they were not quite as spectacular and controversial as his previous brace, a place in the final against West Germany was secured.

Over 100,000 supporters packed into the Azteca to witness a fierce five-goal thriller, with Maradona the main attraction on the day. Despite being manhandled in every way by his strict opponents, the captain led his side to a memorable 3-2 victory, and fans were overjoyed to see the huge grin on his face upon lifting the famous trophy.

The wizard that was Maradona played every minute of the competition, garnering the respect of pretty much everyone watching on, be it fans, officials, coaches, or indeed opponents, who had done everything humanly possible to stop him. But despite a record number of fouls against the Argentina hero, his heart was destined for the trophy, and it deservedly went his way.

With six goals, England’s Gary Lineker finished the 1986 World Cup with the Golden Boot, but it was Argentina star Maradona that clinched the Golden Ball for his phenomenal displays. He is one of only two Argentinians to be awarded the honour, with Lionel Messi following in his footsteps in 2014. The PSG star will seek to replicate Maradona's title-winning feats this winter at the 2022 World Cup in Qatar.

Maradona would go on to feature in two more World Cups for his country, captaining the side on both occasions. The first would involve another trip to the final, and another meeting with West Germany, this time in Italy. The nation’s leading marksman was, however, distracted by an ankle injury throughout the competition, and was certainly not as effective in front of goal this time around, with his side losing 1-0 to the West Germans in Rome in the final.

The USA 1994 World Cup followed, but his presence at the tournament was overshadowed by matters off the pitch. In true Maradona fashion, the forward stole all the headlines thanks to his failed drugs test after just two matches. This, of course, left authorities with no choice but to send him home. The first match, against Greece, would play host to his last ever international goal for Argentina, with his last ever appearance coming in the following match against Nigeria. Maradona would end his hugely successful and widely-followed international career with 34 goals from 91 matches over a 17-year period.

Messi has undoubtedly been the only other player to evoke similar feelings for Argentina supporters, with his wand of a left-foot sparking memories of Maradona’s time in the country’s iconic stripes. Brazil legend Pele was, of course, another to have displayed such phenomenal talents on a football pitch, along with former Manchester United and Northern Ireland man George Best.

But perhaps none had quite the pull on the heartstrings that Maradona had on his followers, with his death in 2020 proving just how popular he was with all members of the footballing community, all across the globe.