Everyone remembers certain World Cups for certain reasons. Whether it’s Michael Owen’s burst in behind Argentine lines as a 17-year-old at France 98, or Diego Maradona’s “hand of god” moment in Mexico 86, we’ve all got unforgettable memories of the World Cup.

For fans of a certain generation, Italy’s victory at the 1982 renewal of the world’s most prestigious football tournament in Spain will live long in the memory.

Managed by Enzo Bearzot, captained by legendary keeper Dino Zoff, and with goal-scoring extraordinaire Paolo Rossi leading their line, the battle-hardened Italians stood firm during the group stages, digging in for three draws, before springing into action in the knockouts, where they beat Argentina, Brazil and Poland, before defeating the Germans by three goals to one in the final.

Memorable for another reason

However, for those non-Italians who remember, the overriding memory from that tournament has nothing to do with Italian glory. Many remember the 1982 World Cup for an awful challenge by goalkeeper Harald Schumacher in the semi-final between West Germany and France, a match now known as the ‘Night of Seville’.

Regarded by many as one of the greatest football matches of all time, let alone one of the best World Cup clashes, two giants of the international game went toe-to-toe at the Ramón Sánchez Pizjuán Stadium, and boy, did they serve up a classic. 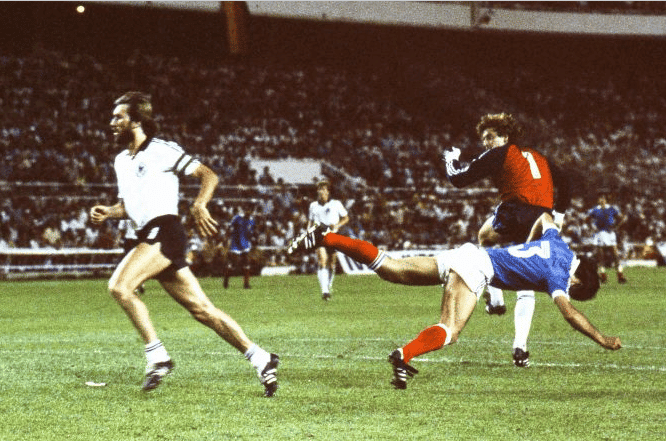 The game had everything. End-to-end action, defensive resistance, and intricate passages of play were easy on the eye, particularly when the French midfielders got on the ball. It had sweeping counterattacks, and great goals too. What the game also had was one of the most famous collisions in footballing history.

Everyone remembers certain World Cups for certain reasons. Whether it’s Michael Owen’s burst in behind Argentine lines as a 17-year-old at France 98, or Diego Maradona’s “hand of god” moment in Mexico 86, we’ve all got unforgettable memories of the World Cup.

For fans of a certain generation, Italy’s victory at the 1982 renewal of the world’s most prestigious football tournament in Spain will live long in the memory.

Managed by Enzo Bearzot, captained by legendary keeper Dino Zoff, and with goal-scoring extraordinaire Paolo Rossi leading their line, the battle-hardened Italians stood firm during the group stages, digging in for three draws, before springing into action in the knockouts, where they beat Argentina, Brazil and Poland, before defeating the Germans by three goals to one in the final.

The French players battled on, trying desperately to avenge their injury-stricken teammate. They came inches away from winning it late in the day when left wing-back Maxime Bossis struck the bar with a thunderous long-range effort minutes from full-time. A winner wasn’t found in 90 minutes, though it was the French who got what they must’ve thought was their just rewards when they took the lead early in extra time, thanks to Marius Trésor, who scored in the 92nd minute.

Just six minutes later, justice appeared to have been served, and it looked to be all over, when Alain Giresse fired in from the edge of the box, making it 3-1 to France.

With little more than 20 minutes remaining, a comeback seemed less than likely, but Die Mannschaft were determined in its approach. A goal after 102 minutes from Karl-Heinz Rummenigge, who finished the tournament as the second-highest scorer with five goals to his name, paved the way for a West German fightback, and after 108 minutes, when Klaus Fischer deftly poked the ball in at the near post, that fightback was complete.

To penalties, the game went. As it so often does, the shootout went the way of the Germans, who won 5-4 after five spot kicks had been taken by each team. Now enemy number one as far as the French were concerned, Schumacher made the difference, saving a penalty from Maxime Bossis, who was the only player to miss from the spot.

At the time of the World Cup in 1982, France had what was considered the best midfield in the world, and lots of people thought that the French, with superstars such as Michel Platini, Alain Giresse and Marius Trésor in their ranks, would go all the way. Many still believe, had they not been rocked both by the horrific challenge and the fact that Schumacher’s error went unpunished, that Les Bleus would’ve not only made it through that semi-final but would’ve lifted the trophy. Instead, it’s always been a case of what might have been for some of the best players ever to represent the nation of France.

For Schumacher and the West Germans, the World Cup continued, and it was Italy in the final, though the luck that had seen the keeper remain on the pitch without picking up a card in the semi-final ran out in Madrid. The Italians proved to be too strong, scoring three times before West Germany could reply with an 83rd-minute consolation goal, scored by Paul Breitner.

What came next for the pair?

Harald Schumacher went on to make 548 career appearances at club level, featuring as an integral part of an FC Koln side that won one Bundesliga title and three DFB Pokals between 1978 and 1983. By the end of his career, he’d racked up 76 appearances in goal for West Germany too, featuring in two World Cups, including the 1986 edition, where he would once again meet France and Patrick Battison. The Frenchman commented before the two teams faced each other and stated that he’d “forgiven and forgotten”.

Despite playing in the World Cup Final in both 1982 and 1986, Schumacher never got his hands on football’s biggest prize, but he was between the sticks when West Germany strode to glory at the 1980 renewal of the European Championship.

Following his retirement from the professional game, Harald Schumacher, known by Germans as “Toni”, forged a career in coaching. He has held goalkeeping coach positions as a host of clubs, including Borussia Dortmund and Bayern Munich. 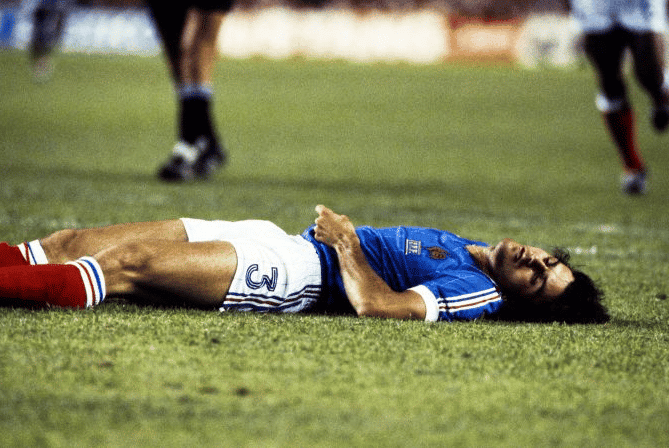 Battiston made a recovery that some thought would not be possible at the time, least of all Michel Platini, who was the first player to realise the severity of the situation after the collision with Schumacher. The French captain told reporters after the game in Seville that he’d first thought his teammate might be dead due to him having no pulse, coupled with the fact that he's gone incredibly pale.

Following medical care and treatment, Battiston returned to the game, and by the end of his career had made 557 club appearances, winning multiple Ligue 1 trophies with Saint-Étienne, Bordeaux and Monaco. A key player for France during the 1980s, Battiston made 56 appearances for Les Bleus, and in 1984, he achieved international glory when the French won the European Championship on home soil.

For Battiston, post-playing days have included working for Bordeaux, the club where he spent the greater portion of his career as a player. Most notably, he has served as the head of the academy and has reportedly been an integral part of the club signing some exciting youth players.

Neither Patrick Battiston nor Harald Schumacher, both of whom achieved plenty with the clubs that they played for and with their respective countries, would’ve wanted their footballing legacies to boil down to a single moment, and as impossible as it may be, it’s a moment that both would probably like to forget. Then again, thanks to those few seconds at the Ramón Sánchez Pizjuán in 1982, the two players were etched into history, and as such, fans born long after that night in Seville know their names.