The 1998 World Cup is famous for many things. David Beckham lashing out at Argentina’s Diego Simeone is one of the lasting memories for England fans, as is Michael Owen showing devastating speed to burst in behind and score somewhat fabulously in the same game.

For many, Zinedine Zidane’s footballing masterclass will stand out from that tournament. The Frenchman pulled the strings for Les Bleus, before delivering in the final, scoring two goals.

However, for some, France 98 will be all about how Brazilian Ronaldo, dubbed the world’s best player prior to the tournament, mysteriously broke down hours before the final, only to play and be a shadow of the player that devastated defences and entertained the crowds for the previous two weeks.

Exploded onto the scene at a young age

Prior to the 1998 World Cup, Ronaldo Luís Nazário de Lima, better known as Ronaldo had spent four years terrorising both keepers and defenders in Brazil, Holland, Spain and Italy. As a mere 17-year-old he scored 34 times in a single campaign for Cruzeiro, which prompted a move to PSV in the Eredivisie. In Holland, the Brazilian continued to score at a rapid rate, which meant Barcelona came calling.

In just one season under Bobby Robson at the Nou Camp, Ronaldo notched 34 goals in 37 games, scoring one of the greatest goals ever when dribbling from inside his own half, beating six or seven players before coolly netting at the end of what was a truly sensational solo run. There are famous images of Robson standing on the touchline with his hands on his head, an expression of disbelief plastered on his face, as if to say “what on earth have I just seen this kid do”.

In Italy the next year, the 20-year-old continued to leave defenders in his wake, combining great skill and imagination with frightening pace and killer instincts in front of goal. He finished his debut Serie A campaign with 25 goals.

He also scored six goals as Inter Milan played their way to victory in the UEFA Cup that season. In the final itself, the youngster delivered one of his best performances to date. Against a strong Lazio side, Ronaldo ran the defence ragged, hitting the post from a thunderous outside-the-box strike in the first half, before breaking clear of the opposing back-line and rounding the keeper in style 20 minutes from time, wrapping up the game for Inter.

Ahead of FIFA’s 1998 showpiece in France, few people regarded Ronaldo as anything other than the player to fear the most. The forward was coming off the back of three fantastic seasons since swapping Brazil’s Serie A for the riches of European club football, and those defenders who’d tried to stop him during that time had failed, so it’s fair to say that there was no shortage of expectation on the shoulders of the 21-year-old.

Shoulder the pressure he did. During the second group game, Brazil’s No.9 provided a timely assist for the aging Bebeto. Ronaldo also scored during that game, running in behind in trademark fashion before applying a deadly first-time finish on the half volley. That goal was a sign of things to come.

In Brazil’s first knockout game against fellow South Americans, the man who was fast becoming the most sought-after commodity in world football netted twice. The first came from the spot and had a hint of luck about it, as the Chilean keeper got his fingertips to the ball as it went in. There was nothing lucky about the second, which Ronaldo slotted with his usual precision after receiving a pass just outside the box on the right-hand side of the pitch.

Denmark came next for the country gunning for a fifth World Cup win, and though the young striker didn’t get on the scoresheet, he played an integral part in the 3-2 win, assisting twice.

In the semi-final, the man affectionately nicknamed R9 fired home once again, showing timely movement to sneak in behind the defence, before taking a deft first touch and applying a calm finish. In the shootout, the shaven-headed assassin wouldn’t be denied as his country triumphed and booked their place in the final.

The biggest games are made for the best players, and ahead of the 1998 World Cup Final, Ronaldo was just about the best player on the planet. The stage was set at the Stade de France in Paris, but Ronaldo would not deliver the show-stopping performance that the world was waiting for.

Just hours before the teams were due to make their way to the stadium, Ronaldo, in his hotel room, suffered a seizure. The news of this unexpected and unexplained bout of illness quickly reached Brazilian manager Mario Zagallo, who made the obvious decision to name a starting XI that did not contain the name of his best player. 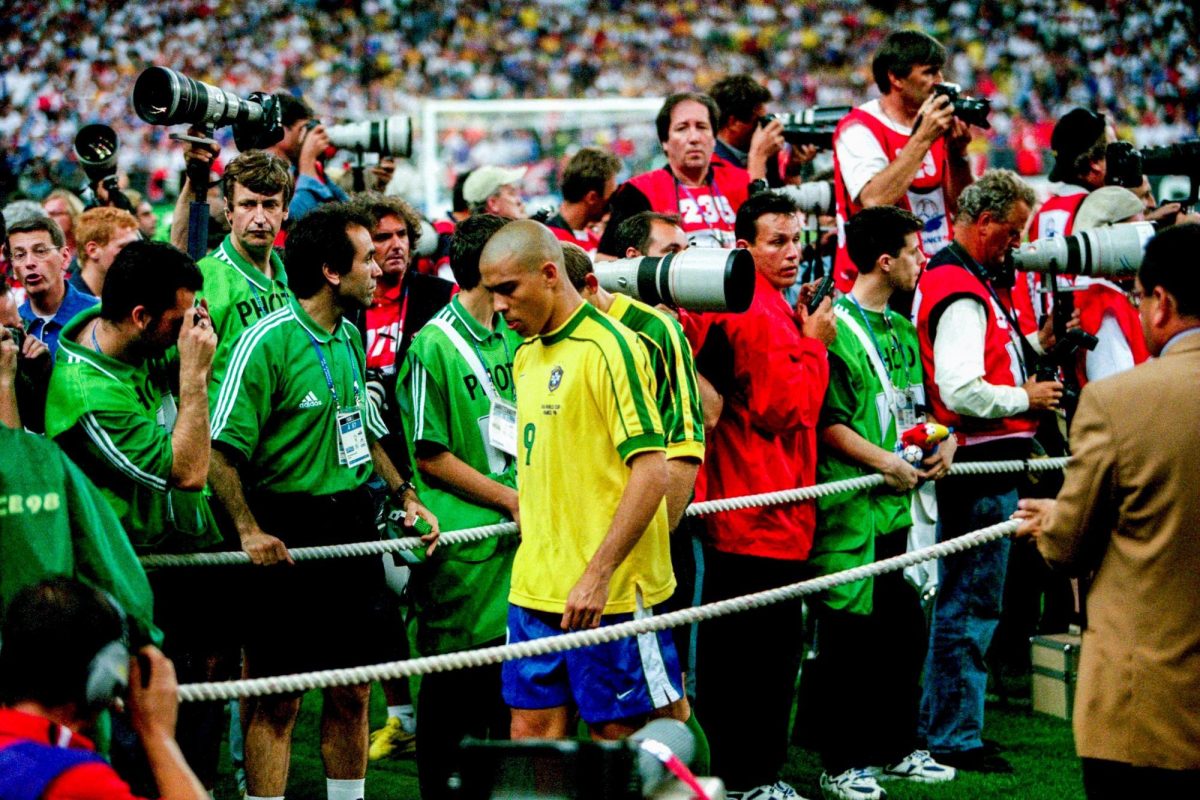 However, the story didn’t end there. Long after the final in 1998, Zagallo recalled that after naming his starting XI and arriving at the stadium in order to prepare for the game, Ronaldo appeared stating that he was over whatever had caused him to fall ill and demanded to play. Knowing how important the youngster was to the team and to the nation, Zagallo put him in the team.

Was it the right decision to play Ronaldo? From a medical and well-being point of view, possibly not, but it’s easy to see the dilemma that Zagallo faced. Here was the best player in the world, a player capable of making the difference. Could he really leave R9 on the sidelines when being told by the man himself that he was fit to play? It would’ve been a bold move, that’s for sure.

Much to the delight of the Brazilian fans and just about everybody who wasn’t in some way associated with the French team, Ronaldo started the game, but it didn’t take long for all to see that the forward wasn’t right.

A player described as a powerhouse, who often made some of the best defenders in the game look like amateurs, just couldn’t deliver the goods. His touch was off, he didn’t explode into action like before, and the French defenders made light work of handling his limited threat. 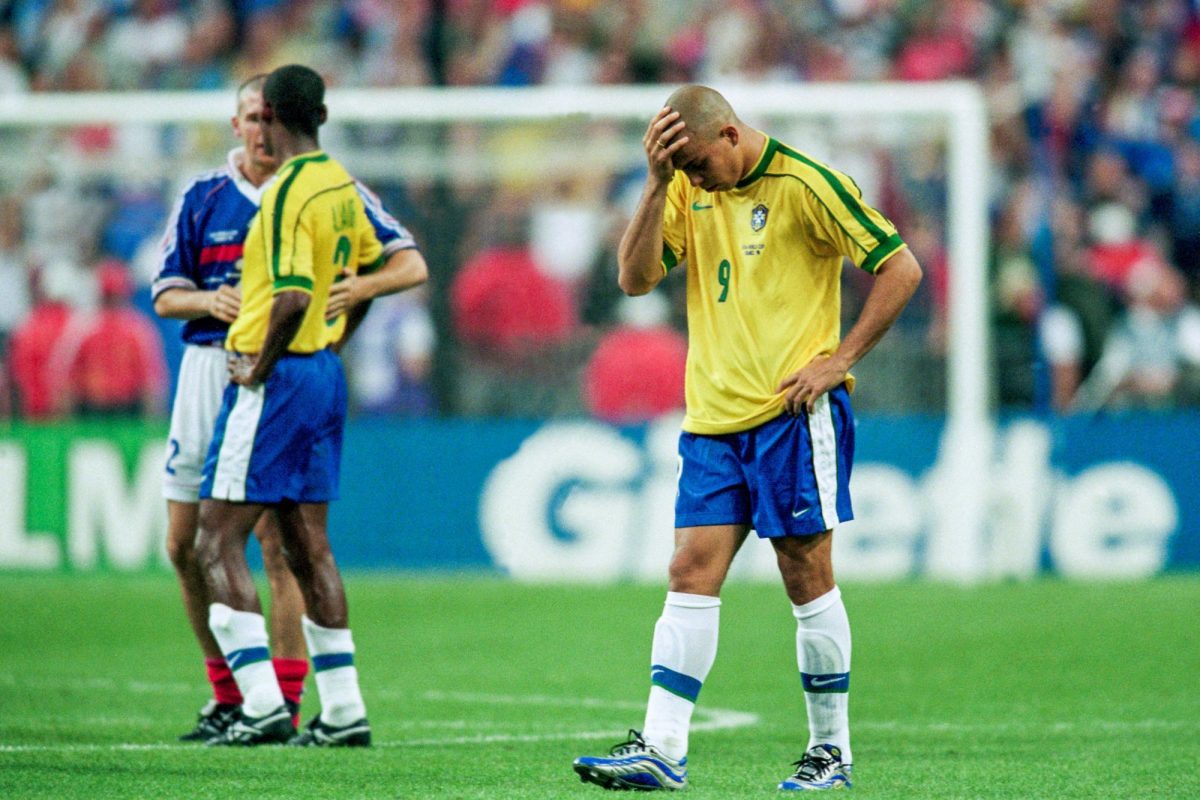 Not only did the French somewhat easily defend against Ronaldo, which was unthinkable before the game, but they got the better of a Brazilian team that was clearly shaken by the incident involving their star player.

Following the game, once Ronaldo’s health issue was revealed to the world’s media, all kinds of theories and conspiracies were thrown around. Some said that the forward was suffering from epilepsy, and others believed that his breakdown was due to the stress that came with being labelled the world’s best player. Only Ronaldo and those close to him will ever know the true cause of the issues that prevented him from being at his best in Paris.

Thanks to his outstanding performances in the lead-up to the final, Ronaldo was still named as the player of the tournament.

Life after the disappointment of 1998

Ronaldo’s career became something of a roller coaster ride in the end, one that contained tremendous highs and crashing lows. The disappointment of his health problems prior to the 1998 World Cup Final was to be the first of many for a player whose undeniably rare ability earned him the nickname of O Fenômeno, which in Portuguese means “The Phenomenon”.

During the 1999-2000 season, Ronaldo, who was now the captain of his club side, suffered an injury that many still consider to be one of the worst that elite football has ever seen. The striker ruptured tendons in his knee. After surgery and six months of recovery, Ronaldo returned, but unfortunately, his bad luck wasn’t finished. 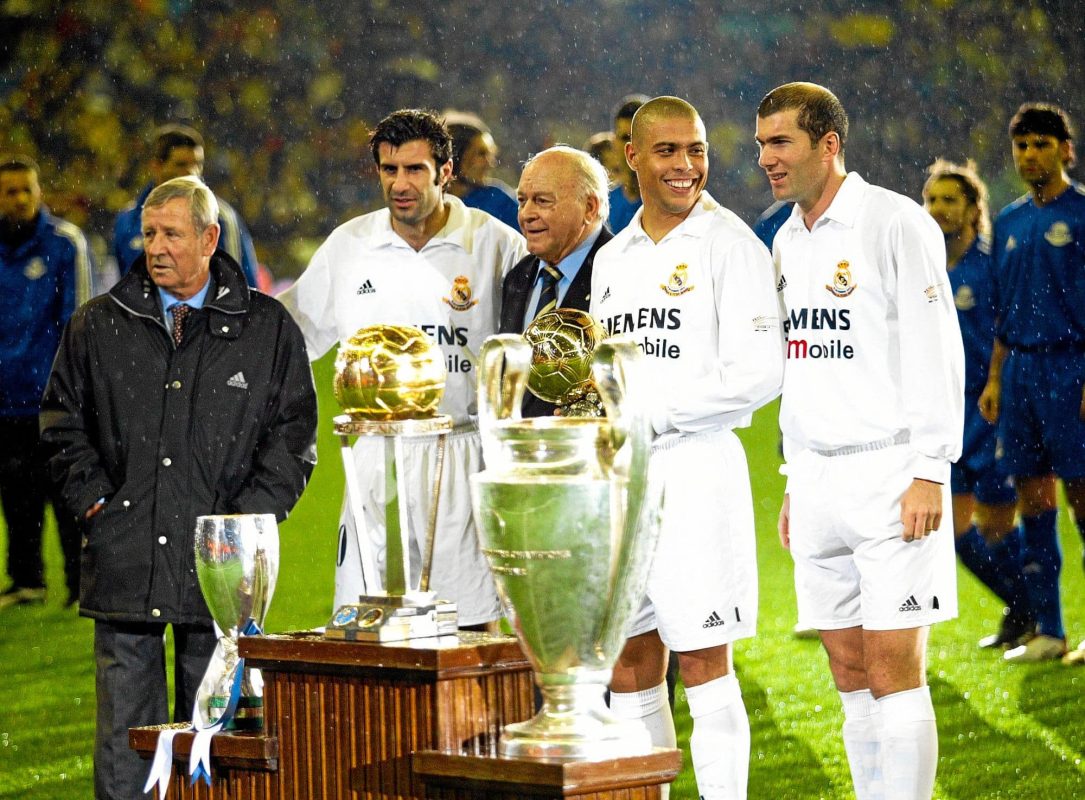 Just minutes into his long-awaited comeback, the man who previously couldn’t stop scoring, fell to the ground, his face awash with agonising pain. He’d once again injured the tendons in his knee-cap, this time suffering a total rupture.

The once unstoppable Brazilian forward was thought to be finished, though R9 was more than just raw footballing talent. He was determined too. He battled his way back to an acceptable level of fitness and after missing the 2000-2001 season in full, was ready to return for the 2002 World Cup.

Many people questioned whether the Inter Milan forward would be truly ready for the 2002 World Cup in Japan after missing so much football over the previous two years, but as he did frequently throughout his career, O Fenômeno silenced his critics with some dazzling performances.

With Ronaldo now seemingly fit enough to complete an attack that also contained Ronaldinho and Rivaldo, Brazil looked ready to hit the ground running, and they did so by beating Turkey on match-day one. R9 scored one of the two goals, applying a first-time finish to a measured cross sent in by the left-footed Rivaldo.

On match-day two, the forward was at it again, alluding his marker to score a poacher's goal at the back post, as the Brazilians beat China with ease. They were also in full flow in the final group game, scoring five goals, two of which were scored by Ronaldo.

The knockout stages of the competition saw Ronaldo add two more goals to his tally before Brazil finally reached the final, where they would meet Germany.

Like few teams could, with their star striker fully fit and in fine form, the Samba Boys put the Germans in their place at Nissan Stadium in Yokohama. Ronaldo scored twice in a 2-0 win, claiming the Golden Boot with eight goals.

He's a two-time World Cup winner having won the Golden Boot at the 2002 FIFA World Cup.

Happy birthday to one of the greatest strikers of all-time. pic.twitter.com/iSdQ87fBsn

In the years that followed, though injuries continued to strike, Ronaldo, who twice won the Ballon d’Or and was crowned the FIFA World Player of the Year three times, cemented his position among the greatest players to ever play the game.

In 2011 he retired having featured in three World Cups, one of which he won, and had been a key player for some of the world’s biggest clubs, including Barcelona, Inter Milan, AC Milan and Real Madrid. He scored 284 goals in 384 career appearances at club level, winning many trophies, such as the UEFA Cup, the Copa del Rey, and the UEFA Cup Winners’ Cup. Ronaldo was also crowned a champion of La Liga on two occasions with Real Madrid in 2003 and 2007. 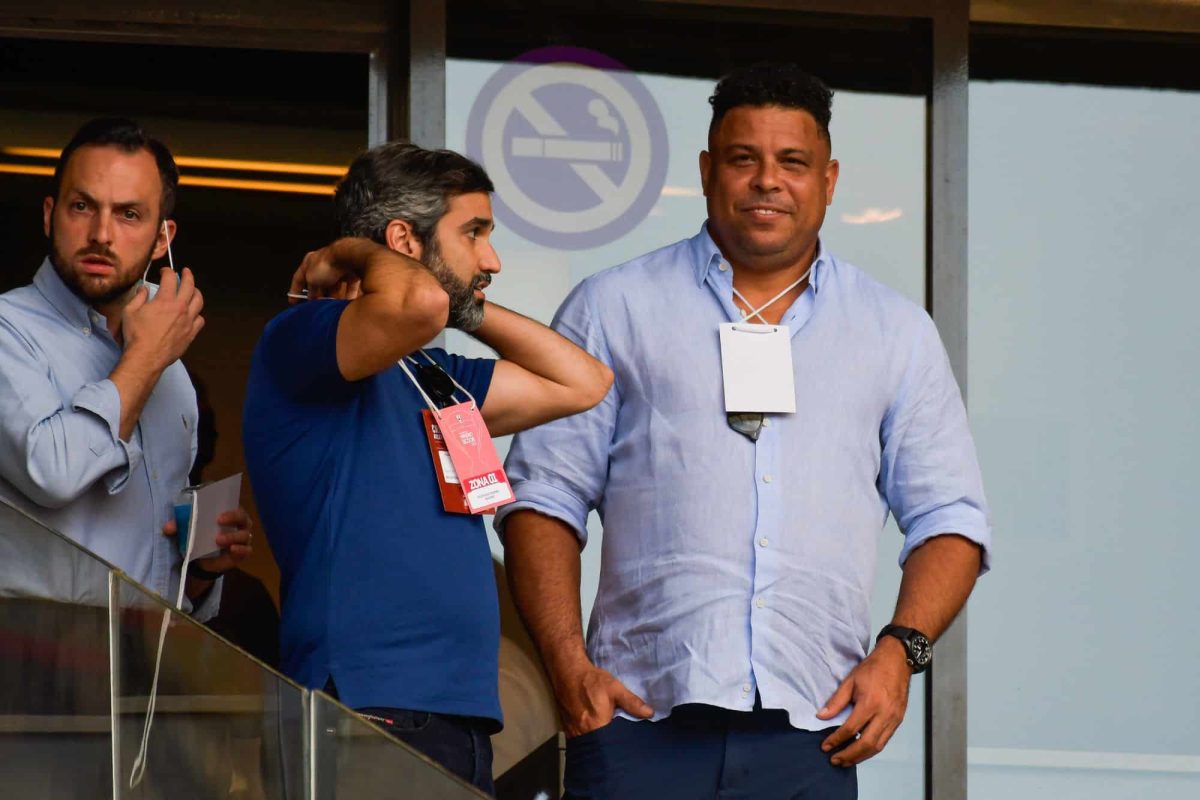 Internationally, Ronaldo’s achievements are just as impressive. Upon retiring, O Fenômeno could look back on a career that included a World Cup win and two Copa América victories. Often the scorer of wonderful goals, Ronaldo put the ball in the back of the net 62 times in 98 games for his nation. Only Neymar and Pele have scored more goals in the famous yellow of Brazil.

The breakdown before the 1998 World Cup Final, which led to Brazil’s demise and Ronaldo looking like a shadow of the player he’d been just days before will always be memorable, but such are the achievements of the great striker that people will remember him for so much more. If ever there was a player worthy of being labelled “The Phenomenon”, it’s Ronaldo.